Stop defending "Game of Thrones": How HBO gutted the stories I love

"Game of Thrones" isn't the worst show on TV by a mile, but it's proven it can't hold a glass candle to the books 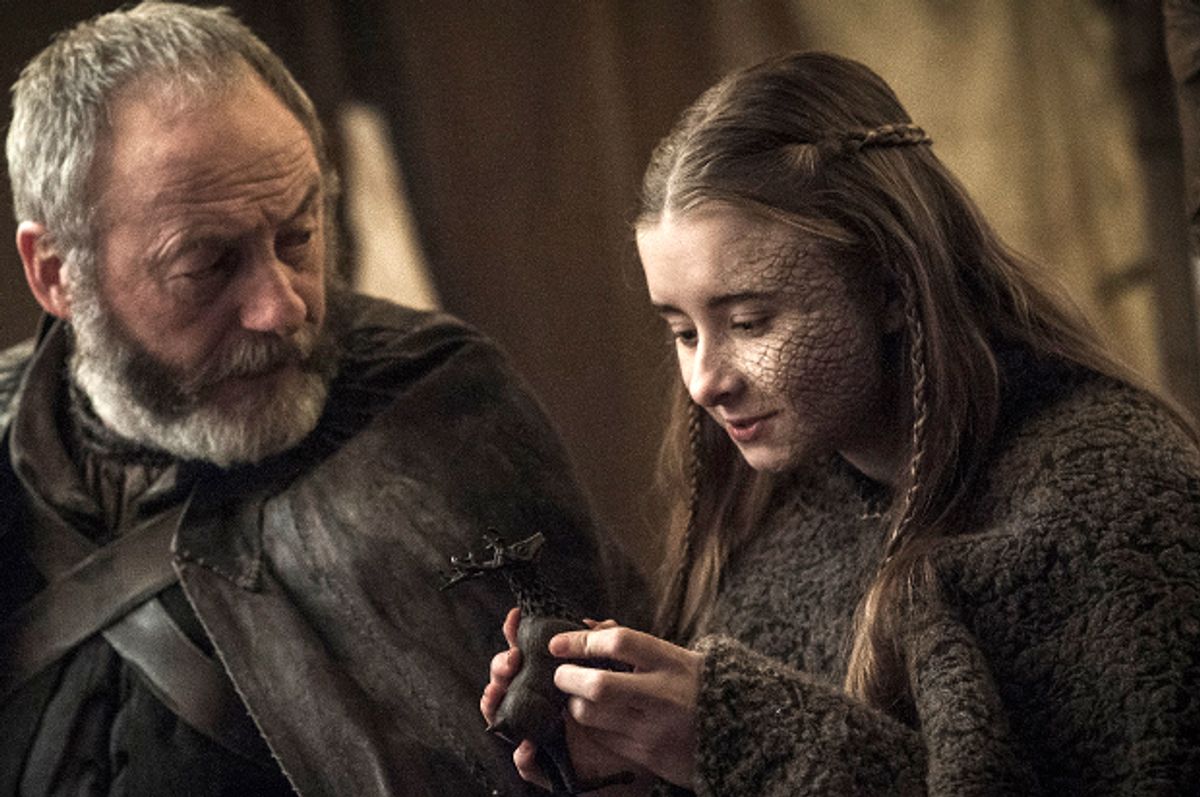 [SPOILER WARNING: This article contains spoilers for both "Game of Thrones" and the "A Song of Ice and Fire" book series.]

The Internet has hit peak “Game of Thrones” outrage -- but this time it’s not coming from TV critics (rightly) bemoaning unnecessary violence against women or fans fuming about the death of their favorite character(s). No, this time fans of "A Song of Ice and Fire" (the book series on which HBO’s “Game of Thrones” is based) are at the source of the hotter-than-wildfire reproach.

On Monday, Linda Antonsson -- co-owner of Westeros.org, a popular "A Song of Ice and Fire"/"Game of Thrones" fan-site and co-author of "The World of Ice and Fire," along with her husband, Elio Garcia, and the man himself, George R.R. Martin -- fired off a series of tweets critical of the show and showrunners David Benioff and Dan Weiss. Specifically, she took issue with Benioff and Weiss revealing Stannis would burn his daughter Shireen in the series’ next book, "The Winds of Winter," which has yet to be released. Obviously, this is a massive spoiler for book readers — seeing Stannis burn Shireen on television alone wouldn’t have meant he’d do it in the books, since there are characters who are dead in the show but still alive in "A Song of Ice and Fire" (and vice versa), and this season in particular has diverged from the book series in many significant ways.

But Benioff and Weiss felt the need to confirm the spoiler, and Antonsson, for one, was not happy, leveling scathing criticism at the two writers, whom she refers to as "Dumb and Dumber":

She then later wrote that her anger mostly stemmed from a feeling of betrayal:

This isn’t the first instance of a book reader voicing profound discontent with the show, just a recent and high-profile instance. A community on Tumblr is thriving around critiquing the show and favoring the books. Popular blogs like Game of Thrones Gifs and Musings and The Cultural Vacuum regularly skewer the show’s often nonsensical plots (Jaime going on a secret mission to Dorne just to find out he could’ve had Myrcella back if he had just asked nicely -- oops!), poor characterizations (Stannis deciding to burn his daughter because of some snow and dead horses), unbelievably clumsy foreshadowing (with a blog devoted to this topic alone; it’s Chekhov’s gun, guys, not Chekhov’s atomic explosion), over-the-top and unnecessary sex/nudity (boner-activated Dornish poison because ¯\_(ツ)_/¯ ) and often boggling treatment of its female characters (the rape of Sansa, a badass Wildling warrior woman’s undoing stemming from her maternal instincts). The two bloggers even collaborated to pen a hilarious “Book Snob Glossary” and make a “Book Snob Bingo” card.

And let’s not forget the Westeros.org “rant and rave” threads centered around the show, with page counts reaching into the hundreds.

Perhaps the most salient criticism anti-"Game of Thrones" proponents make is that the show robs the set piece moments from the books of their proper context. The show, to a book reader, views like Weiss and Benioff running through a checklist of plot points:

“Cersei getting arrested by the Faith Militant? Check!”

“Daenerys riding off on Drogon? Check!”

When these moments are contextualized poorly, their emotional impact is limited -- sometimes even nonexistent. "Game of Thrones" diminished Daenerys riding off on Drogon into a cheap deus ex machina (by the way, why the did this noble Khaleesi leave her devoted subjects Missandei, Jorah, Daario and now Tyrion behind to die?), when in the books, the moment represents Daenerys finally reclaiming who she is and who she’s meant to be. It is in no way a “How is our hero gonna get out of this one?” moment. But why let any of that get in the way of an awesome CGI shot of Drogon roasting some Sons of the Harpy and Daenerys flying away on him?

And what about Arya and Needle? Weiss said Needle symbolized “revenge” on the show, but in the books it represents anything but. An excerpt from "A Feast for Crows":

“Needle was Robb and Bran and Rickon, her mother and her father, even Sansa. Needle was Winterfell's grey walls, and the laughter of its people. Needle was the summer snows, Old Nan's stories, the heart tree with its red leaves and scary face, the warm earthy smell of the glass gardens, the sound of the north wind rattling the shutters of her room. Needle was Jon Snow's smile. He used to mess my hair and call me 'little sister,' she remembered, and suddenly there were tears in her eyes.”

The show took one of the most beautiful passages from the books and castrated it into a cliché that, to borrow a Simpsons quote, “could’ve spewed from the powerbook of the laziest Hollywood hack.” This has been a running criticism of the show. As I wrote last year on the Daily Dot, “David Benioff and Dan Weiss … are no longer telling the same story as 'A Song of Ice and Fire.' They’re telling a cheaper, bastardized, dollar-store version of it, complete with all the loathsome tropes of Hollywood that drove George R.R. Martin to write his magnum opus in the first place.”

Has Martin finally noticed this? He told Entertainment Weekly he’s attempting to finish "The Winds of Winter" as soon as possible. Ideally, it’ll be released before the next season. He also spoke to Entertainment Weekly about book characters omitted from the show. One was Jeyne Pool -- the girl who marries Ramsay Bolton (and suffers an even worse fate than Sansa) in the books. He mentioned other characters like Willas and Garlan Tyrell, and said he didn’t put them in “just for hoots and giggles, they have roles to play.” He also took to his LiveJournal in May to highlight, in his words, that “the show is the show, the books are the books.” He also mentioned the butterfly effect, and allowed that “sometimes butterflies grow into dragons.” Far from effusive praise.

Can it be coincidence that he decided to release a Sansa chapter from "The Winds of Winter" in April? Perhaps it was a way to remind people that the Sansa of the books is far different (and stronger, and more consistent) than the Sansa of the show?

"Game of Thrones" is fun on an otherwise dull Sunday night. "Game of Thrones" provides a nice opportunity for water cooler chat with co-workers you would’ve otherwise stood with in awkward silence. "Game of Thrones" does not tell "A Song of Ice and Fire’s" story. "Game of Thrones" is a monster, a dragon, of its own now -- a product reducing the most gripping moments from Martin's books into tawdry instances of shock value, absent of any lasting emotion other than “Oh my god; I didn’t expect that!” But “themes are for eighth grade book reports,” according to Benioff. So what does accuracy matter so long as the right person sits on the Iron Throne in the end?