The season finale settles some scores, opens new wounds and re-arranges the deck once again 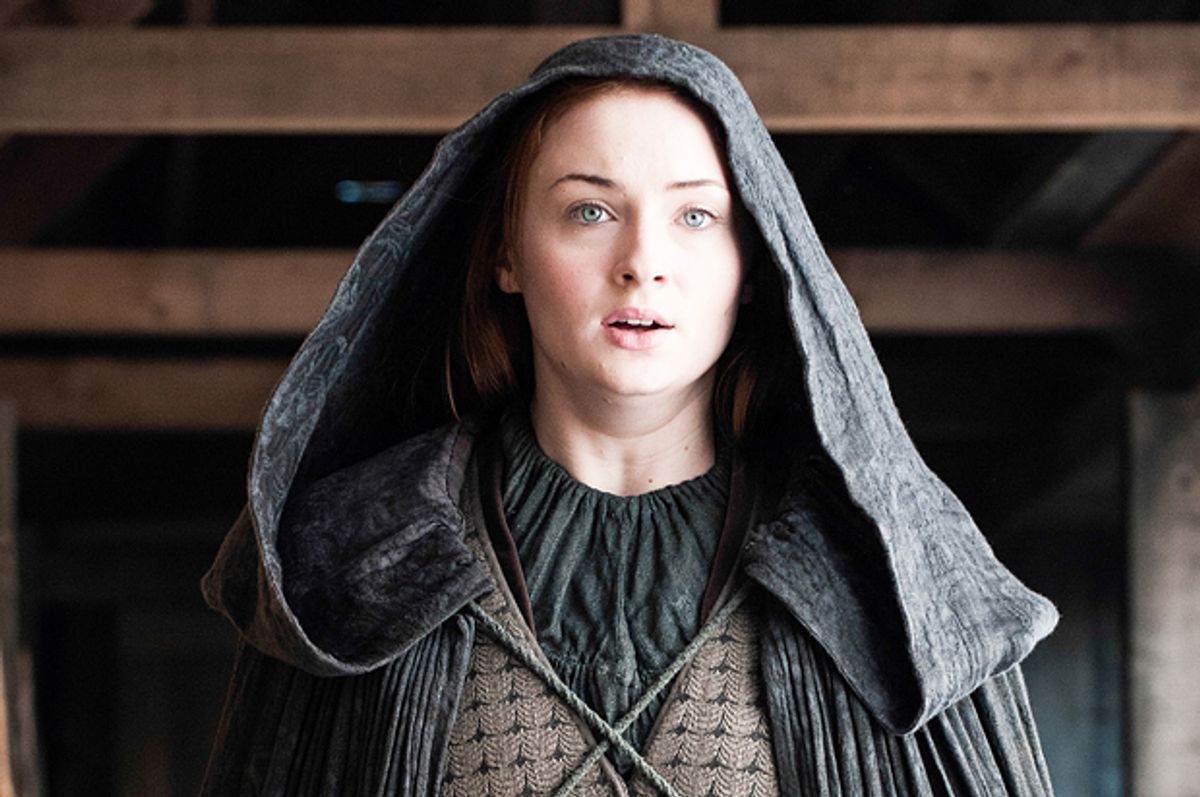 “Yea, though I walk through the valley of the shadow of death, I will fear no evil: for there’s nothing so bad that ye can’t make it so much worse.” — Psalms 23ish, Translation by Benioff, Weiss, and Martin

It has been, all things considered, kind of a rough season on "Game of Thrones." Though season five has contained some of the series’ highest highs (specifically the whole of “Hardhome”) it’s also contained lows too numerous to count. More than anything, it’s been a decidedly uneven season of television and with the crux of the penultimate episode centering around a young girl being burned alive (though very tastefully burned alive) we head into the finale not knowing precisely what to expect, while still being relatively certain that things will go poorly for most people involved.

And go poorly they do! If there’s a single unifying theme to “Mother’s Mercy” it’s that there’s nothing so bad that can’t be made so much worse with time and effort. Beyond that, however, the episode is largely disjointed and the conclusions (rather, cliffhangers) to a dozen or so different plots in the Known Universe.

Let us being, however, where we left off last episode, with Stannis and his troops and the pile of ash formerly known as his daughter. The good news, as far as sacrificial lambs go, is that a thaw seems to be in effect, meaning that the path to Winterfell is now open. That is the extent of the good news, though, as apparently burning a child to death doesn’t get you as much in Westeros’ wintry pseudomagical climate as it used to and Stannis finds out in short order that the sellswords have abandoned him, his wife hung herself, and Melisandre hit the road before the door hit her where the Lord of Light split her. Stannis is undaunted by these setbacks, and by undaunted I mean he has literally no other choice than to march to his death and attack Winterfell because what else is he going to do? Shireen is dead. His wife is dead. Melisandre is gone. He clearly went all in on the wrong horse, namely himself, and all he can do is see it through to the end. The Boltons are ready for his attack and meet him outside the gates, neatly slaughtering the handful of men that Stannis has left. The man himself is left hobbled against a tree when approached by Brienne, who introduces herself before informing him she’s going to kill him on behalf of his dead brother Renly, who Stannis admits to murdering with blood magic. Though we don’t see her land the killing blow, it seems safe to say that the deed is done.

Meanwhile, at Winterfell proper, Sansa breaks out of the rape tower using the sharp instrument she stole when last we saw her. She makes her way to the broken-down tower to light a candle and signal for help, only to have Brienne miss seeing it thanks to the arrival of Stannis and his troops. Sansa hurries back to her room after lighting the candle in order not to be caught out by Ramsay only to run into Myranda and Theon. Myranda has a bow and arrow trained on Sansa and says a lot of nasty things about what parts of Sansa Ramsay requires before Theon summarily pushes her off the castle. Finally, Theon does something to justify his continued existence. He then grabs Sansa and the two of them do their best Butch Cassidy/Sundance Kid and jump off the castle wall, a fall that, we assume, just killed Myranda but who honestly knows at this point. It may be worth noting at this point that Brienne spent an entire season sitting around outside Winterfell only to miss the signal to save Sansa by, like, three minutes. Great.

Back in Braavos, Meryn Trant, resident molester of young girls, is having a great time at the brothel, choosing between three young girls to be his next conquest. He settles on one who seems able to take a punch and her face is unfamiliar to us. For a moment. But soon she is transformed into Arya, who lays into Trant with all of her unrealized rage, stabbing him repeatedly, including (perhaps pointedly) in the eyes. She asks if he knows who she is and tells him she is Arya Stark, before telling him that he is no one, nothing. Unsurprisingly, Arya’s freelance murdering isn’t a big hit over at the House of Black and White, where she’s reprimanded for using someone else’s face when clearly she was not up to the task and then promptly goes blind.

Over in Dorne, where story goes to die, our hale and hearty Westerosi heroes are shipping out for home, with Prince Trystane in tow. The Sand Snakes are there for the send off, apparently so one can whisper lascivious things to Bronn before he leaves. Myrcella and Jaime have a heart to heart while on the boat and he comes clean about being her father and she admits that part of her has always known and that she’s glad, I assume because of all the potential fathers she could have, Jaime has only raped her mother once. Thankfully, they get all of this straightened out, because it turns out that Ellaria poisoned Myrcella with a kiss and now she’s going to die. Surprise! Dorne: Where they even kill young girls in as boring a fashion possible.

In Meereen, a bunch of guys are sitting around talking about how much they love Dany, then argue about who gets to go save Dany, then split up. Tyrion ends up in charge of Meereen, along with Grey Worm and Missandei, a grouping that, if all goes well, will also nab a sitcom pilot on ABC this fall. As if to ensure their pilot’s pick-up, Varys shows up to be charming and great. Also, Dany is somewhere with a broken dragon and surrounded by Dothrakis who have appear to have no intention of acknowledging her as their khaleesi.

And in King’s Landing, Cersei has finally decided to humble herself and confess to (some of) her sins. She admits to laying with a man outside of the bonds of marriage and owns up to the fact that the man she lay with was her cousin Lancel. The High Sparrow allows her to return to the Red Keep, but only after she atones for her sins. Specifically, she is bathed, her hair shorn, and she is made to march through the center of King’s Landing nude, with “Shame,” being chanted with her every step. That, of course, isn’t the only thing accompanying her, as the townspeople lob whatever they can get their hands on at her, as well as their words, “Cunt! Whore! Shame! Whore! Sinner! Brother fucker! Bitch! Slut!” Bloodied, bruised, filthy, Cersei holds her head high as she walks, eyes trained on her home, but she weakens as she gets closer. She leaves bloody footprints in her wake and her lip trembles. Lena Headey has always been impeccable as Cersei, but during this procession, she walks Cersei through the breaking down of her spirit and, through only facial expressions and body language, says more than any dialogue could. When finally received at home, Cersei is welcomed with the introduction of Frankenstein’s Mountain, who gathers her into his arms to take her to her room, the only sight more horrifying than the preceding walk of shame.

Finally, we revisit the wall, where Jon walks Sam through the events at Hardhome and Sam asks for permission to flee the wall with Gilly and the baby in order to become a maester. He argues that he’ll be of more value in the fight to come against the White Walkers if he knows the secrets of the universe and it’s hard to argue with him. He also makes the excellent point that if Gilly and the baby stay at the wall, they’ll be killed, and Sam with them. Jon reluctantly lets them leave, which means he’s now truly alone, with nary an ally left. As though to really drive this point home, he’s then summarily murdered by a small group of the Night’s Watch, led by Ser Alliser Thorne, who stab Jon “for the Watch.” The killing blow comes from young Olly, who really never got over Jon saving the Wildlings, apparently. So ends season five, with Jon Snow, assumed savior of Westeros, bleeding out in the snow.

It’s not a book spoiler to say that there’s no resolution there for viewers, as Jon was stabbed in the books at the end of book five with no resolution in sight. Interviews cropping up online from both Kit Harington and the showrunners claim that Snow is really dead and Harington is really done and that’s all well and good but I still don’t believe it for a second. It’s entirely possible that Jon Snow is dead, but that doesn’t mean that he can’t be revived, as the show (at least formerly) and the books have established. "Game of Thrones" just isn’t a show that was made for cliffhangers, likely because it shoots for an ungodly amount of time and if Harington shows up on set, we’ll all know it long before it airs on HBO. It’s a weird choice, to be sure, but, ultimately, maybe it’s the perfect atonal note to end a completely atonal season on.