Our long national charade is over: Jeb Bush ends his official non-candidacy after treating us all like fools 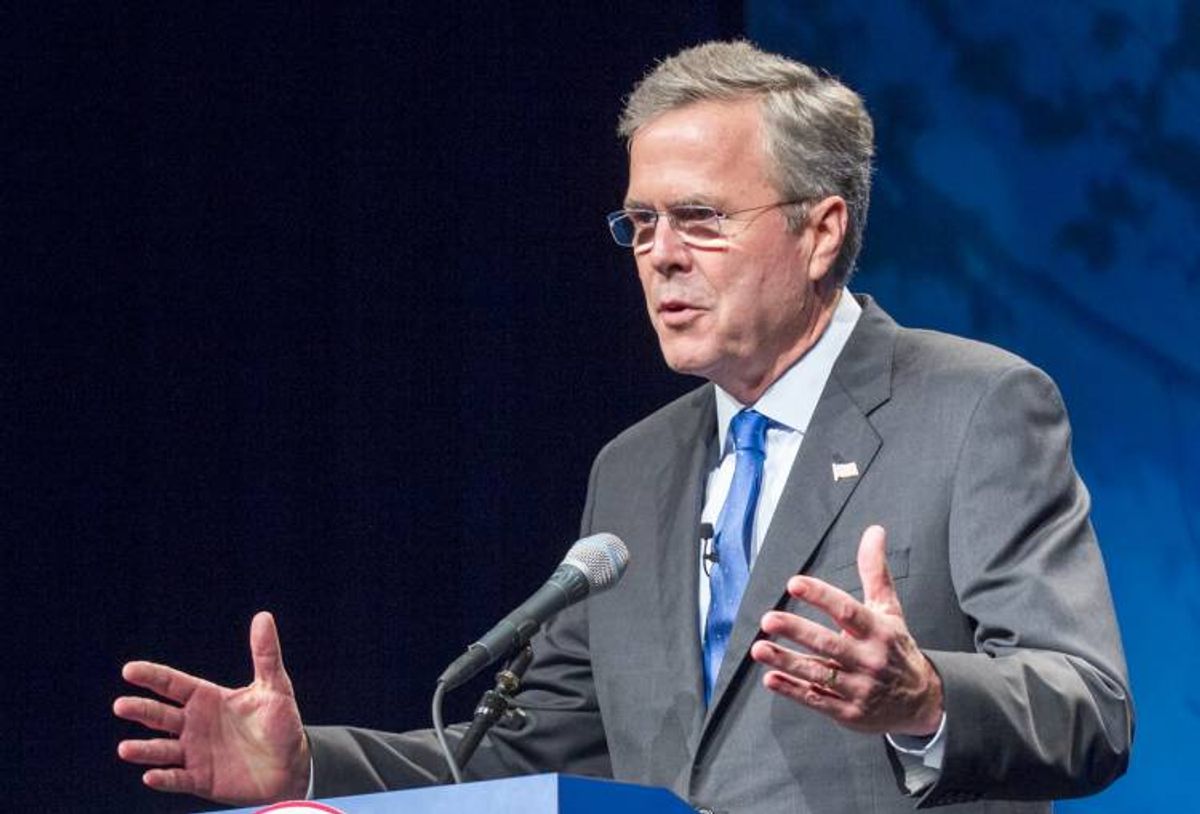 Today, at long last, the obscene and flagrantly absurd shadow campaign of John Ellis “Jeb” Bush comes to an end. Jeb will give a speech at Miami Dade College announcing the results of his half-year, soul-searching, money-grubbing, election law-flouting “exploration” of his own presidential ambitions. Having had a nice long conversation with himself (and having squeezed wealthy donors for as much money as he could for his super PAC), Jeb is set to announce that he is, in fact, an official candidate for the presidency.

That’s sad for me, since it will limit my opportunities to attack Jeb for being a thoroughly corruptible lout. He’s been methodically constructing his campaign apparatus for months and doing everything else an official candidate would, but because he declined to say the magic words “I am a candidate,” he remained free of all the fundraising restrictions that might otherwise slow the growth of his campaign war chest. He did this for six months, it was done in deliberate bad faith, and he knows full well that everyone else knows the scam he pulled. But he also knows that our largely useless campaign finance laws have giant loopholes for him to slide comfortably through, so he doesn’t care.

But that’s all coming to a close today. So I’m going to seize my chance while I can and, for the sake of posterity, chronicle how Jeb Bush spent his final days as a man who is definitely not an official candidate for the presidency.

Like any good bullshit artist, Jeb refused to break character and kept the act going right up to the bitter end. As my colleague Jim Newell ably documented, the political media whipped themselves into a frenzy last week over news that Bush had “shaken things up” and replaced the person who will manage his campaign. While Jeb was on his tour of Europe, a reporter from NBC News asked why he changed his campaign manager, and Jeb threw the question back in her face like she was an idiot for even asking it: “Well, first of all, we don’t have a campaign, so there was no switching.”

Cam-paign? What is this “cam-paign” you speak of? My dear madam, I fear you are confused! I am but a simple traveler in these foreign lands. Now if you’ll excuse me, I must go comment on U.S. foreign policy and have my picture taken shaking hands with heads of state.

So there’s no campaign. Fair enough. But at the same time Bush was chastising reporters for accusing him of having a campaign, he was giving other reporters a sneak peek of the campaign themes he plans to lay out in his big speech today. “I hope that the message will be a hopeful, optimistic one,” he said, according to the Washington Post. “It won't dwell too much on the past. I will talk about why it is important to change directions. I will talk a little bit about, hopefully, the leadership skills that are necessary to solve problems.” (As part of the ludicrous dance around his candidacy, Jeb developed a curious habit of saying he “hoped” that he would do something candidate-related, as if he wasn’t in control of his political destiny.) He’s apparently also going to talk about how Florida, the state he once governed, “was changed by my leadership, and I think it changed for the better.”

Now, if you take Jeb at his word, it’s entirely possible that he’s going to stand behind the lectern at Miami Dade College today and deliver these thoughts on leadership and ruminate on his own successes as governor, and then declare he’s not running for president. It could happen! He doesn’t have a campaign, after all. At least not as far as the Federal Election Commission is concerned.

Anyway, as Jeb was describing to reporters the themes of the campaign he doesn’t have, his advisers were telling other reporters about the campaign strategy they’re going to pursue – hypothetical strategy, I mean. According to CNN:

In conversations with multiple Bush advisers and confidantes in the run up to his official White House launch Monday, a singular theme emerges from inside his close-knit world: Patience.

Team Bush seems to say it as much to remind themselves, as they do the pundit and donor classes. They know patience is not an easy watch-word when today's politics moves at warp speed.

"It doesn't happen in a day," said Al Cardenas, Bush's long time friend who will serve as a senior adviser on his presidential campaign.

And while those Bush aides were leaking strategy details, other Bush people were rounding up and rolling out a series of high-profile political figures who endorsed Jeb for the office he wasn’t officially running for. You know, just normal stuff that people who might not be running for president do all the time.

All this to say that in the days leading up to today’s speech, Team Bush abandoned any pretense of concealing Jeb’s intentions. It’s just as well, since it’s been a long time since anyone had any real doubts about Jeb’s eventual candidacy. But Jeb himself stuck with it. “We don’t have a campaign,” he insisted, making one last mockery of election law before his non-existent phantom campaign magically springs to life.