Hundreds of Palestinian kids were killed in '14 by occupation. Why was Israel removed from child rights blacklist? 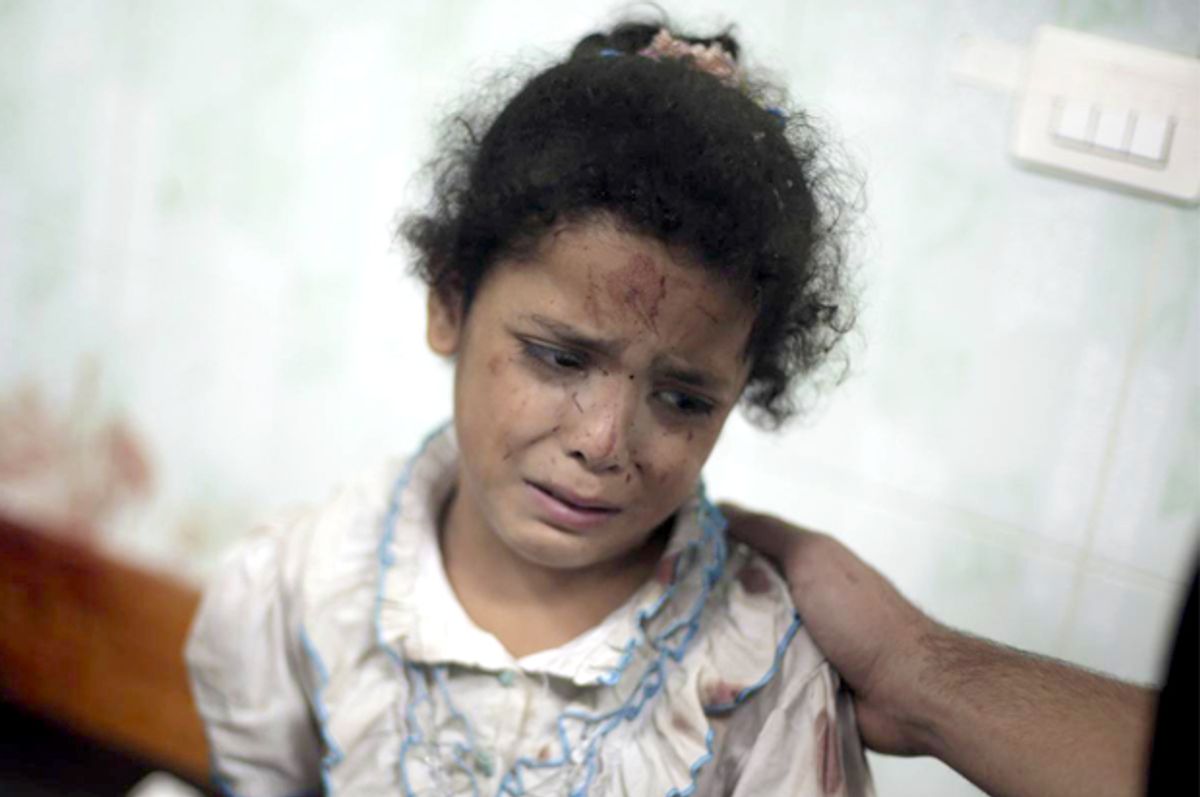 A Palestinian girl cries while receiving treatment for her injuries caused by a 2014 Israeli strike at a U.N. school in Jebaliya refugee camp, at the Kamal Adwan hospital in Beit Lahiya, northern Gaza Strip. (AP/Khalil Hamra)
--

Last week, United Nations Secretary-General Ban Ki-moon capitulated to pressure from the Obama administration and removed Israel’s armed forces from a child rights “blacklist.” The decision not only undermines a strong global tool necessary to protect children in armed conflict, but provides Israeli forces with tacit approval to continue committing egregious violations against children with impunity.

Each year, the Secretary-General submits a report on children and armed conflict to the UN Security Council that includes an annex, or “list of shame,” specifically identifying armed forces and groups found to commit grave violations against children. Israel’s armed forces were recommended by Leila Zerrougui, UN Special Representative of the Secretary-General for Children and Armed Conflict, for inclusion in the list for killing and maiming children and carrying out attacks against schools. This was rejected by Ban, as was the recommendation to list Palestinian armed groups.

The latest report, released on June 8, is itself a real contradiction. While Ban expressed deep alarm “at the extent of grave violations suffered by children as a result of Israeli military operations in 2014” and recognized the “unprecedented and unacceptable scale” of Israel’s military violence, he omitted Israel’s armed forces from the annex.

The report methodically details the devastating impact Israel’s prolonged military occupation had on Palestinian children, highlighting that 557 Palestinian children were killed in 2014. The total ranked third highest behind Afghanistan (710) and Iraq (679), and significantly more than in Syria (368). The report notes that at least 543 schools were damaged or destroyed in the Occupied Palestinian Territory (OPT), the highest recorded number of all situations in 2014.

A report released in late April by a UN Board of Inquiry, established by the Secretary-General himself, found Israel responsible for strikes on UN schools and shelters in Gaza that killed at least 44 Palestinians, including children. This was the second time Ban had established a UN Headquarters Board of Inquiry to examine incidents involving UN premises and personnel in Gaza related to an Israeli military offensive.

During Israel’s military offensive on Gaza last summer, Defense for Children International Palestine found overwhelming and repeated evidence of direct targeting of children by Israeli drone-fired missiles and attacks carried out against schools. Disturbingly, Israel, the world’s largest exporter of aerial drones, killed 164 children in drone strikes during the offensive.

While the list includes some of “the most barbaric terrorist organizations around the world” according to U.S. Senator Ted Cruz, the standard for “listing” is not whether an armed force or group acts as heinously as the Islamic State group or Al Qaeda. An armed force or group will be listed where evidence demonstrates a pattern of committing grave violations against children, including killing and maiming children or carrying out attacks against schools.

The Secretary-General’s annual report focuses on the impact of armed conflict on children in specific situations of concern, and relies on evidence-based monitoring and reporting limited to six grave violations against children, including killing and maiming, child recruitment, and attacks on schools or hospitals. The report is prepared as part of the UN Security Council’s children and armed conflict agenda, a uniquely strong framework for addressing grave violations against children.

Unlike other UN mechanisms, “listing” is a process meant to give UN agencies the tools to encourage, and sometimes compel, armed forces and groups to stop committing atrocities against children. Listing would have established an official UN-led monitoring and reporting mechanism on the ground, and obligated Israeli authorities to engage with the UN Office of the Special Representative of the Secretary-General for Children and Armed Conflict. To be removed from the list, Israeli authorities would have been required to sign and implement a UN-approved action plan to end the grave violations.

Responding to questions why Ban removed Israel from the final list, Stéphane Dujarric, spokesperson for the Secretary-General, encouraged “everyone to not focus so much on the list, but on the report as a whole,” declaring that the report “is much more than just a list” and will have an impact.

No doubt, over the past decade, the Secretary-General’s annual reports have helped to increase protections for children in situations of armed conflict as Dujarric suggests. However, for Palestinian children, detailed and comprehensive data and information on grave violations committed by Israeli forces in each annual report since 2006 have failed to foster compliance of Israeli forces with international child protection standards.

We should be disturbed by the fact that Ban caved to pressure and prioritized politics at the expense of upholding universal child rights protections for Palestinian children who have had their lives decimated by repeated Israeli military offensives and prolonged military occupation.

As violations continue, the latest report is proof that listing is necessary to in some way address widespread and systematic violations against children by Israeli forces. It is deplorable that a proven and strong evidence-based accountability tool to protect children during armed conflict has been significantly undermined to shield Israel from accountability.

While Israel’s omission from the list will likely perpetuate the status quo of systemic impunity, this is a pyrrhic victory for Israel as its reliance on U.S. government-provided impunity is not sustainable given growing demands for justice and accountability for persistent human rights violations deeply entrenched in a 48-year-old military occupation.