Jeb inspires the nation: In America, any son and brother of presidents can grow up to be president! 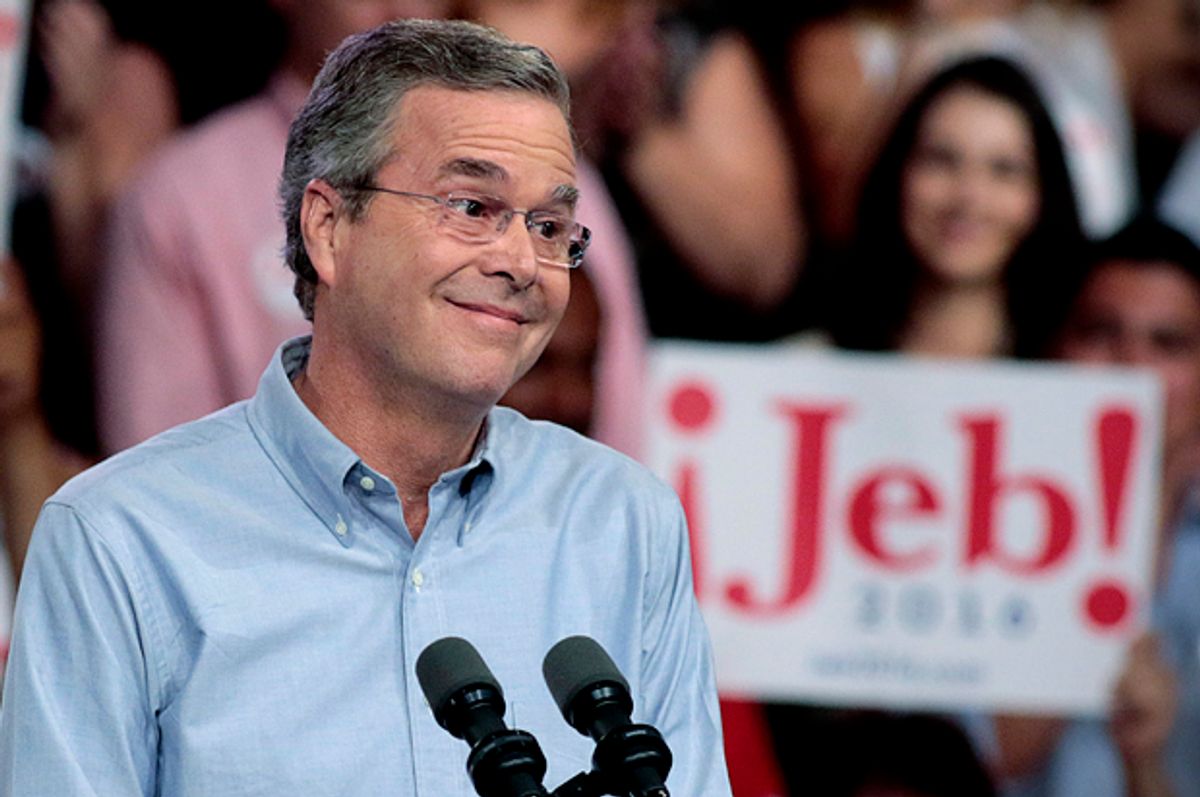 Going into his big speech announcing his presidential campaign yesterday, John Ellis “Jeb!” Bush had telegraphed that the tone and tenor of his remarks would be “hopeful” and “optimistic,” in keeping with his stated intent of running a “joyful” campaign for the White House. “I kinda know how a Republican could win,” Jeb! said back in December, “whether it’s me or somebody else, and it has to be much more uplifting, much more positive.” Candidates who make a commitment to run a “positive” and “uplifting” campaign almost always end up breaking it once the polls tighten and their consultants convince them of the need to “define the opposition” with unrelenting negative advertising. And, sure enough, I didn’t really come out of Jeb!’s speech feeling as though he’d lifted me up or left a positive impression. Mainly, I was confused.

There was quite a bit of vacant but happy-sounding rhetoric that could be considered inspirational or hopeful if you’ve been locked in a storage shed your entire life and have never heard a political speech before. Sprinkled liberally throughout, though, were explicit attacks on Democrats Barack Obama and Hillary Clinton, and implicit attacks on his Republican rivals for the nomination. And that’s fine – sniping at the opposition is part of politics, even if it’s not especially “positive.” But when Jeb! tried to balance out the attacks with a bit of “inspiring,” he ended up shooting himself in the foot.

There are some policy items to get to in a moment, but first off I have to highlight this one passage in particular that is just so bad that I’m not entirely sure how it ended up making the final cut. Jeb! was railing against Obama’s Cuba policy and promised that he, as president, would “go to Havana in solidarity with a free Cuban people.” From there, he abruptly pivoted to the de rigueur celebration of America as a place of boundless opportunity, and these are the words that escaped his mouth:

JEB!: Great things like that can really happen. And in this country of ours, the most improbable things can happen. Take that from a guy who met his first president on the day he was born, and his second on the day he was brought home from the hospital.

That’s the Jeb! Bush message: America is a place of amazing opportunity, as exemplified by the man with two presidents in his immediate family who is now running for president himself. The magic of America is the crazy accident of Jeb! Bush being born wealthy and privileged, and then finding himself in a place of wealth and privilege. What a miracle, what an inspiration.

Jeb!’s political pedigree hangs over everything he does because his father’s presidency was a muddled flop and his brother’s presidency was a roiling foreign policy disaster that culminated with the worst economic crash in 75 years. I guess he thought this would be a fun and folksy way of delving into the touchy topic and maybe make light of it in a harmless way. Instead he ended up endorsing dynasticism and his own elite privilege as quintessentially American. Whoops.

The Bush legacy – particularly that of his brother – wove itself into other parts of Jeb!’s speech as well, leading him to reject and embrace portions of it as he laid out his vision for the country. He lauded economic “growth that lifts up the middle class, all the families who haven’t gotten a raise in 15 years.” If you’re doing the math at home, 15 years takes us right back to the year his brother was elected on a tax-cutting and regulation-slashing platform that, by Jeb!’s admission, didn’t produce shared growth. So what revolutionary policy will Jeb! pursue? He’ll cut taxes and slash regulations. But it will work this time, Jeb! insists, because he did it in Florida, where he cut taxes and the economy grew and created jobs. (Jeb! was actually taking credit for gains realized through the housing bubble of the mid-2000s, which popped right after he left the office.)