"Orange is the New Black's" Nicky shocker: A tribute to Litchfield's most beloved (natural) redhead 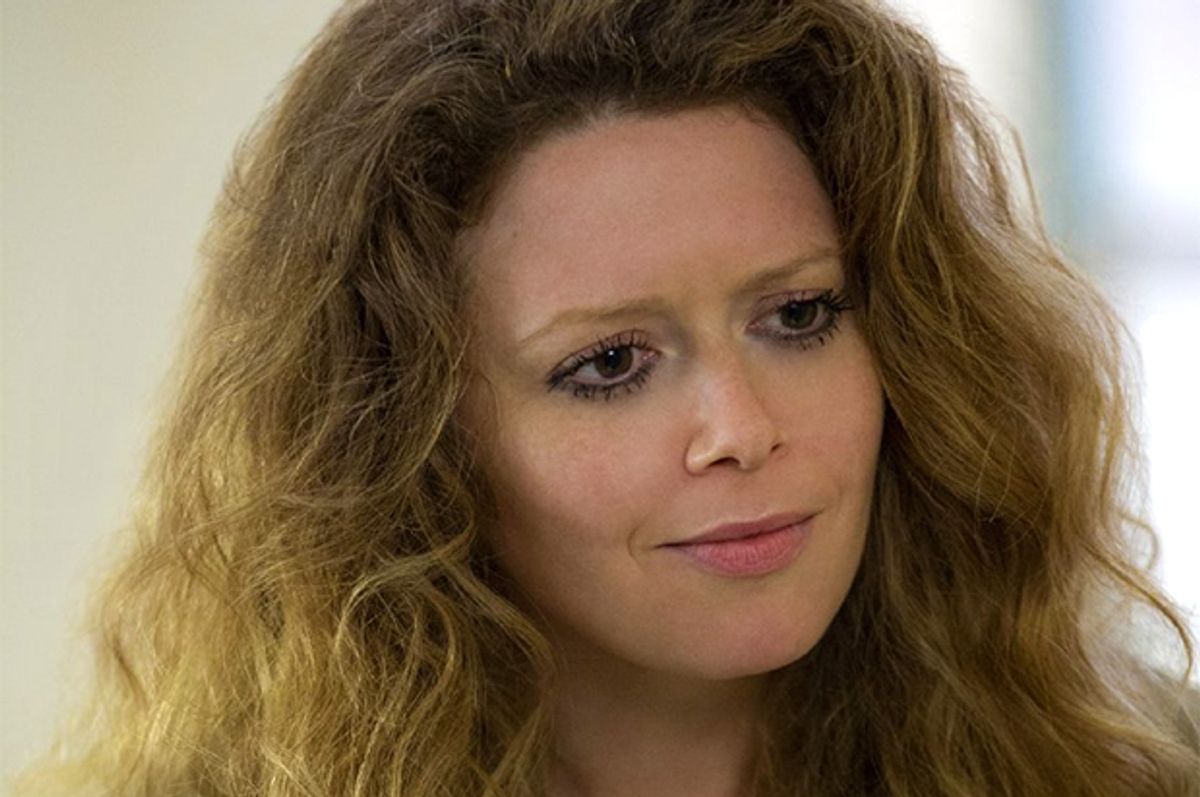 Natasha Lyonne in "Orange Is the New Black" (Netflix)
--

Spoilers for "Orange is the New Black" season 3 below, obviously.

This season, Nicky Nichols had a plan — teaming up with friend-and-sometimes-rival Big Boo to smuggle the heroin left behind in Litchfield at the end of last season outside of the prison walls to sell elsewhere. They wrangle Luscheck, the prison's most inept and corruptible employee, to be their man on the outside. The plan goes awry when the meth heads snitch and Luscheck blames Nicky (rightfully, as it turns out) for the tiny bit of heroin she set aside for her own (tragically inevitable, it would seem) rainy day. Caputo orders Nicky out of Litchfield to be sent down the hill to maximum security lock-up, and she did not return for the rest of the season (her fate on the show remains unclear). It was a devastating exit, both for her fellow inmates --Morello was so sad she couldn’t even do her makeup, goddamnit! -- and for the audience, who has grown to adore her as a fan favorite over the past two-and-a bit seasons.

So let’s raise a plastic glass of pilfered prison hooch to Nicky Nichols, the finest (natural) redhead in all of Litchfield. Here are five reasons that we loved her so:

“Orange Is The New Black" is a show full of standout performances, but few can hold a candle to Natasha Lyonne, a giant of an actress who got a well-deserved first Emmy nod for her performance last year. Lyonne is one of the few faces on the show who wasn’t a fresh one; rather, she already had well-honed comedic chops -- beginning as a child actor and later in late-nineties comedies like "American Pie" and "But I'm a Cheerleader" -- which have only blossomed over the course of "OITNB." Lyonne  has such incredible stage presence — that inimitable raspy voice as she spits out pithy one-liners, the lioness hair, the arms-folded/eyebrow-raised/gives-no-fucks body language — that she fills every room she enters. Litchfield is going to feel a lot emptier without her.

2. Her sense of humor

Despite living a life shot through with tragedy, throughout the course of the show, Nicky provided some of the show’s most welcome comic relief. A relentless smart-aleck brimming with charisma and caustic wit, Nichols has repeatedly wielded some of the best one-liners in all of Litchfield. Who forget her sex contest with Boo, which elicited statements like: “I am a sexual Steve Jobs,” “I’m like Icarus whose wings melted before he could fuck the sun," “I am like a bean-flicking Mother Teresa” (God bless).

3. Her frankness and intellect

While she may have made some dumb personal choices. Nicky is easily one of the smartest ladies of the group, and she often acts as an audience proxy, breaking down our illusions about life in the slammer and piercing the prison’s veneer of bullshit with her darts of wisdom (as she says, while drilling a hole: "It’s an art piece representing the futility of blue-collar labor in a technological age. And vaginas”). And her intellect extends not just to an ability to skillfully navigate the idiosyncracies of prison life (on the prison’s racial divisions: "Look, just pretend that it's the 1950s, it'll make it easier to understand”) but more importantly to illuminate them with her unique insight. The sad thing is that she can read herself, too — as she says, she is a "bloodhound for oblivion” — which doesn’t mean she’s able to control herself in the face of the looming beast of addiction.

Caustic though she may be on the outside, Nicky has a soft heart and an undying loyalty to those she considers her friends (as she tells Soso: "I look out for my friends. You just don't happen to be one of them.”) Some of "Orange is the New Black's" best moments come from the relationships between the inmates, and Nicki has perhaps more meaningful connections than anyone else in the prison: Whether it's helping Piper and Alex navigate the ropes way when they first arrive, her wrenching back-and-forth with Red as her prison "mother" helps wean her off drugs, or her healthily antagonistic relationship with Boo. Nicki is one of the most beloved and respected people in Litchfield because of her remarkable ability to read people and know exactly what the right thing is to cheer them up, whether it's clasping Morello and reminding her that she is deserving of love, or trying to lighten the mood for a depressed Alex by reminding her “there’s always hope tomorrow will be taco night.” (That sense of humor again!)

Of course, we partly love Nicky because she’s a larger than life character who we'd want to be BFFs with, but by the same token, we appreciate her because of her genuine human frailty. Over the course of the show, we have truly seen Nicky at her lowest — watching her self-destruct through addiction, both in this season’s flashbacks and last season, when Red helped her detox. While "Orange is the New Black" is amazing for the mosaic of lives it shows, Nicky’s hit home for me in particular for me, reminding me of so many of the people I knew growing up, for whom a life of privilege was no match for the claws of addiction. Indeed, Nicky's arc parallels Natasha Lyonne’s own backstory as a promising young actress who nearly died and underwent heart surgery due to addiction, and it might be part of why her performance comes across as so raw and real. As she told Deadline:

"I struggle to articulate just how personal this has been for me and how heavy it really is without minimizing my own life experience. I did not anticipate making it out alive, and I surely did not anticipate being in a sudden-hit television show, and getting a second round at this. ... It’s tricky for me to play because I have such a firsthand experience of who she is and who I want her to be. I know so many other people that are her because of the kind of life I lived when I was, you know, out “doing my research.” The show is ultimately about big themes like regret and mistakes and living with the consequences of those things."

Sometimes this show eschews realism for narrative purposes - - oh hi again, Alex Vause, fancy seeing you back here!!! — but the fact that Nicky wasn't returned to Litchfield this season by some act of narrative deus ex machina is particularly tragic because it feels depressingly like real life. So many wonderful people destroy their lives through drugs, while a harsh and unfair incarceration system for drug offenders, along with an ongoing failure to promote treatment and harm reduction within these institutions only compounds the tragedy of these squandered lives. Oh Nicky, you deserved better, and we’ll miss you so.