Rachel Dolezal dodges the hard questions: "It's more complex than being true or false"

The controversial former NAACP leader sits down with "Today" 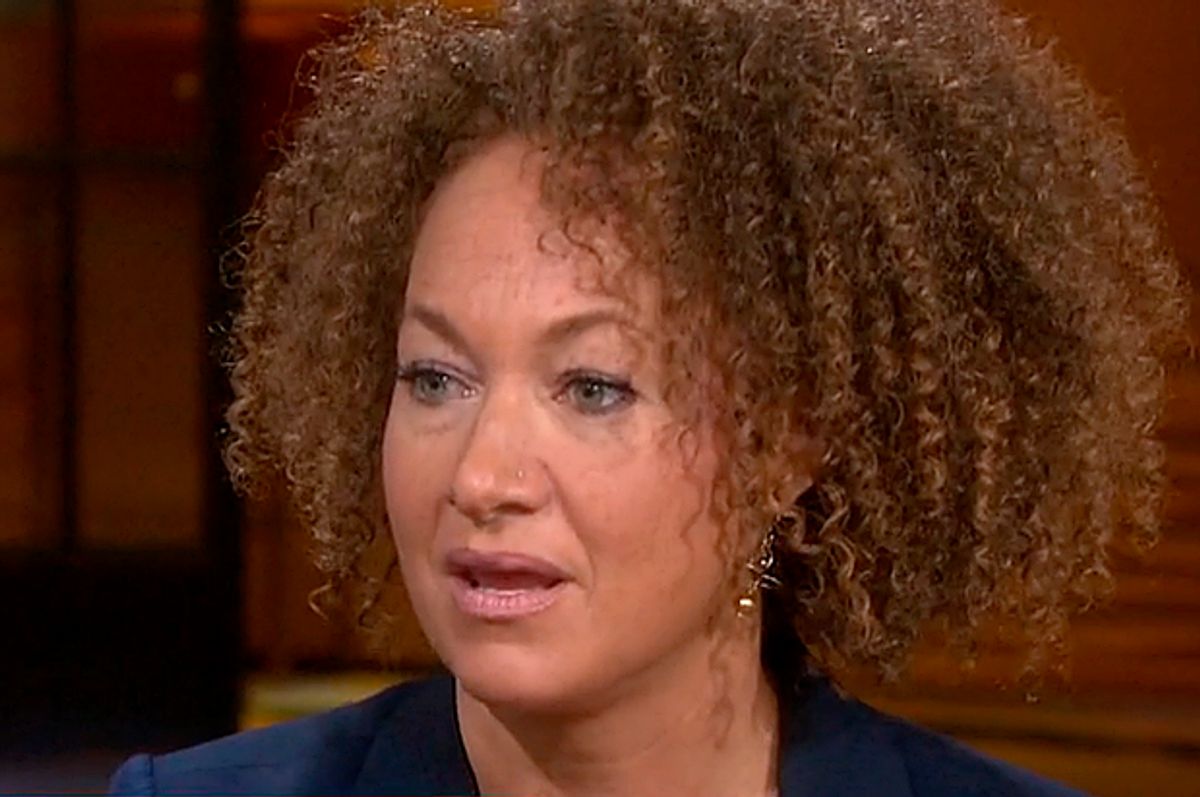 You'll be relived to know, Rachel Dolezal is doing just fine. In her Tuesday interview with "Today," the recently resigned head of the Spokane NAACP appeared assured and unbowed over the controversy that been burning over the past week, since her parents came forward to accuse her of passing herself off as black. She says, "I would make the same choices again." But she does understatedly admit, "I did feel at some point I would have to address the complexity of my identity."

Dolezal's apparent ease may have been in part thanks to the often gentle nature of Matt Lauer's line of questioning, starting with his opening that "You've started a discussion on race and what it means in this country." That's a pretty interesting way of framing it, considering that Dolezal — whose brother says claims she warned him, "Don’t blow my cover" — did not willingly start this conversation, and has steadfastly dodged direct questions about her actions and motivations. For instance, when Lauer asked her point blank, "Are you are an African American woman?" she replied, "I identify as black."

Throughout the conversation, Dolezal smiled pleasantly, with just a hint of tension visible when confronted about her actions. When asked about her parents' assertion that she's Caucasian, she replied, "I really don't see why they're in such a rush to whitewash some of the work that I have done and who I am and how I have identified," literally using the word "whitewash" to describe an experience that is at its core about passing for black.

And when Lauer got tougher, asking her when she began "deceiving" people about her race, she replied, "I do take exception to that, because it's a little more complex than me identifying as black…. I was identified when I was doing human rights work in North Idaho as first transracial. And then when some of the opposition to some of the human rights work I was doing came forward and started, the next newspaper article identified me being a biracial woman. And then the next article, when there were burglaries, nooses, etc., were that this was happening to a black woman and I never corrected that… because it's more complex than being true or false."

The local police recently dropped their investigations into Dolezal's claims involving potential targeting and hate crimes. Her accounts of those incidents have been disputed. As for it being "more complex," or that this is a story of the media making assumptions, let's note how she's presented herself. In a 2009 story, she says, "I come from an eclectic household with African-American, Native American, German, Czech, Swedish, Jewish and Arabic heritages and culture. "A 2012 interview says that "Rachel Dolezal was born in a teepee in Montana. She grew up wearing moccasins and was planting seeds by the age of 3… After Montana, Dolezal’s family moved to Colorado and then South Africa." Where did the interviewer get that information? In the profile, she describes herself as "coming from a trans-racial family that has hop-scotched to a variety of racial-tension areas" and is described as "a rainbow. African-American, Native American, German, Czech, Swedish, Jewish and Arabic, she is a poster child for diversity in all of its aspects."

In a 2014 interview, she's asked, "When did you live in South Africa and what was this experience like?" and replies, "In South Africa, the kids would beat up mixed kids for having darker siblings, but when my darker brother stepped in, they grabbed sticks and beat him, then threw rocks." Her family has lived in South Africa, but claims she has never been there herself. Just earlier this year, she gave an interview in which she's described as a woman "with unexpected green eyes, a caramel skin complexion and a warm smile" whose family "hunted their food with bows and arrows" and moved with her to South Africa. This doesn't sound like a case of, as she says now, "I didn't correct those reports." She does admit, however, "There are probably a couple of interviews that I would do a little differently."

When Lauer asked about the difference in her skin between earlier photos and now, Dolezal replied, "I certainly don't stay out of the sun," adding that she doesn't "put on blackface as a performance…. I have a huge issue with blackface. This is on a very real, connected level. How I've had to go there with the experience, not just a visible representation, but with the experience." She also claimed that she was motivated in part by taking custody of her African American adopted brother Izaiah, explaining, "He said, 'You're my real mom.' And he's in high school, and for that to be something that is plausible, I certainly can't be seen as white and be Izaiah's mom." Right, because white parents don't ever adopt black kids, even though her own parents did just that?

Earlier this week, the Smoking Gun uncovered court documents showing she sued sued Howard University in 2002 for, among other claims, a "discriminatory purpose to favor African-American students" over her. When pressed about that, she said that she thought the university made it clear to her that "other people needed opportunities, and you probably have white relatives that can afford to help you with your tuition. And I thought that was an injustice."

Near the end of the conversation, Lauer spoke of the "the fallout" of the past few days but also "the positive side" of the discussion, and added of her NAACP work that, "You should get a lot of credit, a lot of people feel you breathed new life into that chapter." Dolezal, meanwhile, proudly declared that "As much as this discussion has somewhat been at my expense recently, and in a very sort of viciously inhumane way come out of the woodwork, the discussion is really about what it is to be human. I hope that that can drive at the core of definitions of race, ethnicity, culture, self determination, personal agency and, ultimately, empowerment."

Riiiiiight. Or is this about someone who went well beyond "I identify as black" and seems to have profoundly misrepresented her entire history and experience? Because those are actually two different things.

On Fusion Tuesday, Latoya Peterson offered several questions that have not yet been directly asked to or answered by Dolezal, including issues of possible artistic plagiarism, and "How do you raise your sons to love their authentic black selves, if you are not authentic (or at least, transparent about your identity)?" And while waiting to board a morning flight, Soledad O'Brien reeled off several questions for Dolezal on Twitter, including, "Let's talk about the hate crimes: did you fake them?" And "Why don't you answer direct questions?"

In her final moments of her interview, Dolezal said that one of her sons told her recently, "Mom, racially you're human and culturally you're black." She's free to say that she identifies any way she pleases. But nowhere in her conversation is the acknowledgement that race is not something one can just wish herself into. It doesn't change history, or who has been the beneficiary of privilege throughout it. It doesn't answer the questions about Dolezal's apparent deceptions. And it doesn't answer the basic question Soledad O'Brien pondered from her airport on Tuesday, "Do you think self-identifying is enough to make it so? Why?"