"The Overnight": Jason Schwartzman and Adam Scott ask whose is bigger in this edgy all-night comedy 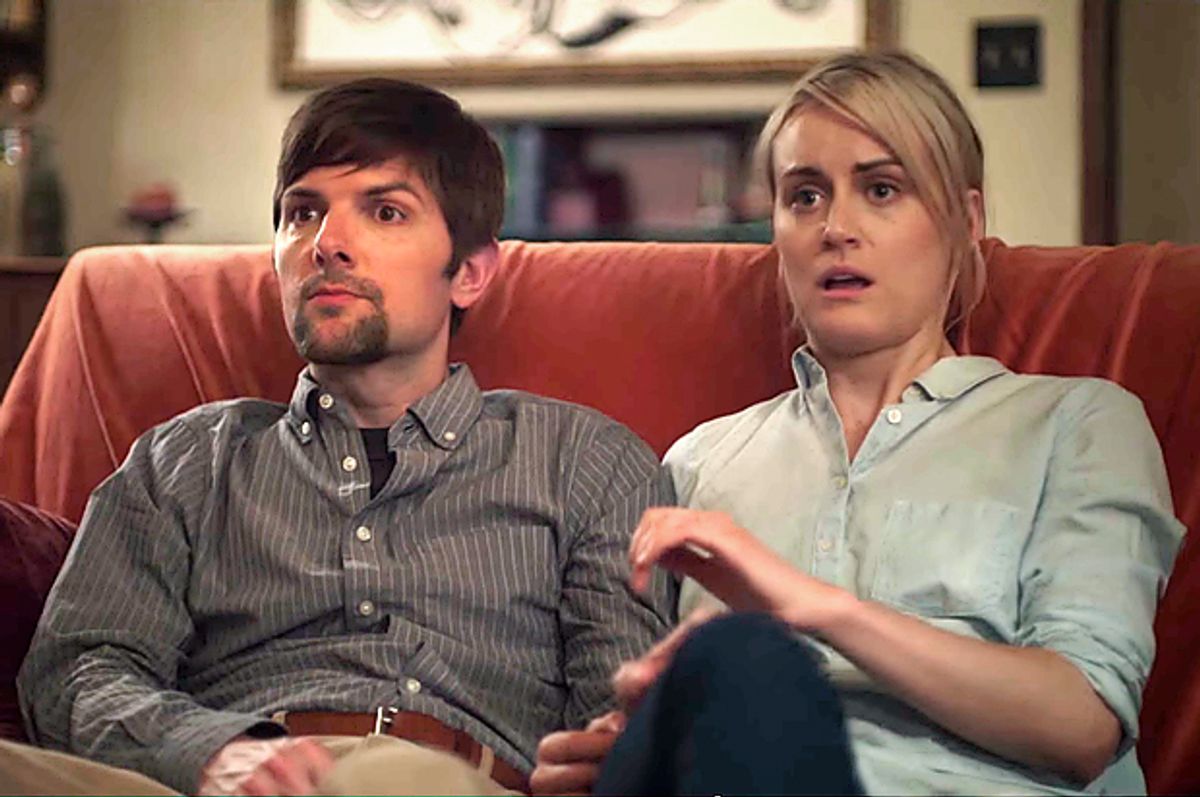 Adam Scott and Taylor Schilling in "The Overnight" (Sundance Institute)
--

Early in writer-director Patrick Brice’s indie comedy “The Overnight,” the almost-perfect young married couple named Alex and Emily, played by Adam Scott and Taylor Schilling, must decide whether to accept a spur-of-the-moment dinner invitation from another parent they just met at the playground. From the beginning, there’s something just a little odd about Kurt (Jason Schwartzman), whose toddler son has immediately hit it off with Alex and Emily’s. He’s dressed just a little too vampire-hipster-Goth for a sunny afternoon at the sandbox, maybe, even by the standards of cool L.A. neighborhoods. He insists on hugging and kissing both Alex and Emily, perhaps with a smidgen too much lingering on the latter. His opening-line joke about the poisonous effects of Gummi Worms on little boys’ tummies falls kinda flat – so, wait, was it even a joke?

But Alex and Emily have just moved to L.A. from Seattle and don’t really know anybody, so it’s not a hard decision. Best-case scenario, they tell each other, is that they just made their first California friend. What’s the worst-case? A few glasses of wine with some boring people. Of course we’re supposed to notice this moment of smug confidence and laugh, but there’s an insidious cleverness to “The Overnight” that keeps the audience just a bit off balance. As in his no-budget first feature, “Creep” (starring himself and Mark Duplass), Brice uses the grammar of a thriller to deliver a story of surprising emotional complexity that never follows precisely the course we’re expecting.

I mean, we’re sitting there in the audience for an adult-type movie about a clean-cut married couple taken on a strange all-night ride, so of course our reaction to Alex and Emily is something like: Ho-ho, worst-case scenario! These two have no idea. But the great strength of “The Overnight” is that it isn’t about a worst-case scenario, despite various things that trend in that direction, such as Kurt’s monomaniacal paintings – all done from life and depicting an aspect of the human body rarely shown on canvas – or the “instructional” videos starring Charlotte (Judith Godrèche), Kurt’s beautiful French wife, aimed at the Scandinavian market. Alex and Emily may in fact end up with the best-case outcome! At the end of the film, we can’t be entirely sure.

It might be going a step and a half too far to suggest that “The Overnight” is subversive, in any grand social sense. But it’s a little bit subversive in terms of the suburban marriage comedy, which has also been vigorously deconstructed in such underappreciated recent efforts as Stacie Passon’s “Concussion” and E.L. Katz’s “Cheap Thrills.” (Catch both of those!) Brice’s script is driven by questions about the nature of desire that are increasingly ambiguous. What do Emily and Alex really want from their attractive and mysteriously affluent new friends? No one’s forcing them to stay there all night (after putting their sons to bed together), getting drunk and stoned and swimming naked in the pool and allowing themselves to be separated from each other several times.

Kurt and Alex spend a fair amount of time in Kurt’s artist studio, leading toward the possibility of Alex posing for one of Kurt’s distinctive works. Charlotte and Emily go for a late-night “booze run,” even though there are many bottles of booze in the house. I can’t get terribly specific about any of this without giving away plot points, but at least at first, the related question of what Kurt and Charlotte want seems clear enough. Even Alex and Emily are not such naïve Seattle transplants as not to detect what they call an “L.A. swinger vibe” – but it’s a vibe that takes quite a while to reveal its essence. Both of these adoring couples have private issues they’re not eager to discuss in public, which of course means it will all come out.

All four actors get a chance to shine in this nicely balanced ensemble, and Adam Scott gets special props for exploring new frontiers of fear and bravery in the realms of male frontal nudity and, shall we say, male anatomical anxiety. But Schwartzman is in every way (and even in the anatomical sense!) the centerpiece, playing a guy whose veneer of cool and confidence hides something else. Not something darker, necessarily – maybe just a squishy central core of bullshit. His alleged trilingual abilities in French and Spanish are a put-on, and amid his blithe torrent of world-traveler conversation comes a reference to “the Central Republic of Africa,” which is not a nation you will actually find on the globe.

I have the weird impression that Schwartzman skipped his 20s altogether, leaping directly forward from his debut as the teenage star of Wes Anderson’s “Rushmore” to his current run playing murky or off-putting 30-something characters like Kurt or Monsieur Jean in “Grand Budapest Hotel” or Philip Lewis Friedman, the aspiring literary lion of “Listen Up Philip.” Of course that’s not true. Schwartzman was in plenty of films in between, including “S1m0ne” and “I Heart Huckabees” and “Marie Antoinette” and … but wait, I think I just made my point. I think I see the problem, in that he’s a magnetic performer who tends to make you suspicious, which is absolutely perfect for the vulnerable-trickster role of Kurt but isn’t really what you want in the young male lead. Anyway, it’s great to have him back, and he just might age into a truly legendary character actor in his 40s and 50s.

On a formal and technical level, there’s nothing remarkable about “The Overnight,” which was digitally shot by John Gulesarian and edited by Christopher Donlon. (You won’t miss much on that level if you wait to watch it at home – but this is one of those movies where surfing the shifting tides of the audience is part of the experience.) But it takes discipline in this age of bloat to bring your movie in under 80 minutes, closing credits included, and still make the audience feel we’ve been taken on a genuine journey with these people, a few big laughs and jagged left turns included. After exploring the unpredictable nature of desire with such potency – and especially the idea that we always want the things we claim we don’t want – does “The Overnight” flinch back toward conventional marriage comedy at the end? Maybe. It all depends where Alex and Emily, and their creator, are going next.

“The Overnight” opens this week at the Angelika Film Center in New York and the Arclight Hollywood and the Landmark in Los Angeles. It opens June 26 in Atlanta, Boston, Chicago, Dallas, Houston, Philadelphia, Portland, Ore., San Diego, San Francisco, Seattle, Toronto, Washington and Austin, Texas, with more cities and home video to follow.