The Senate voted to ban torture, and that left pro-torture Marco Rubio very sad (even though he didn't vote) 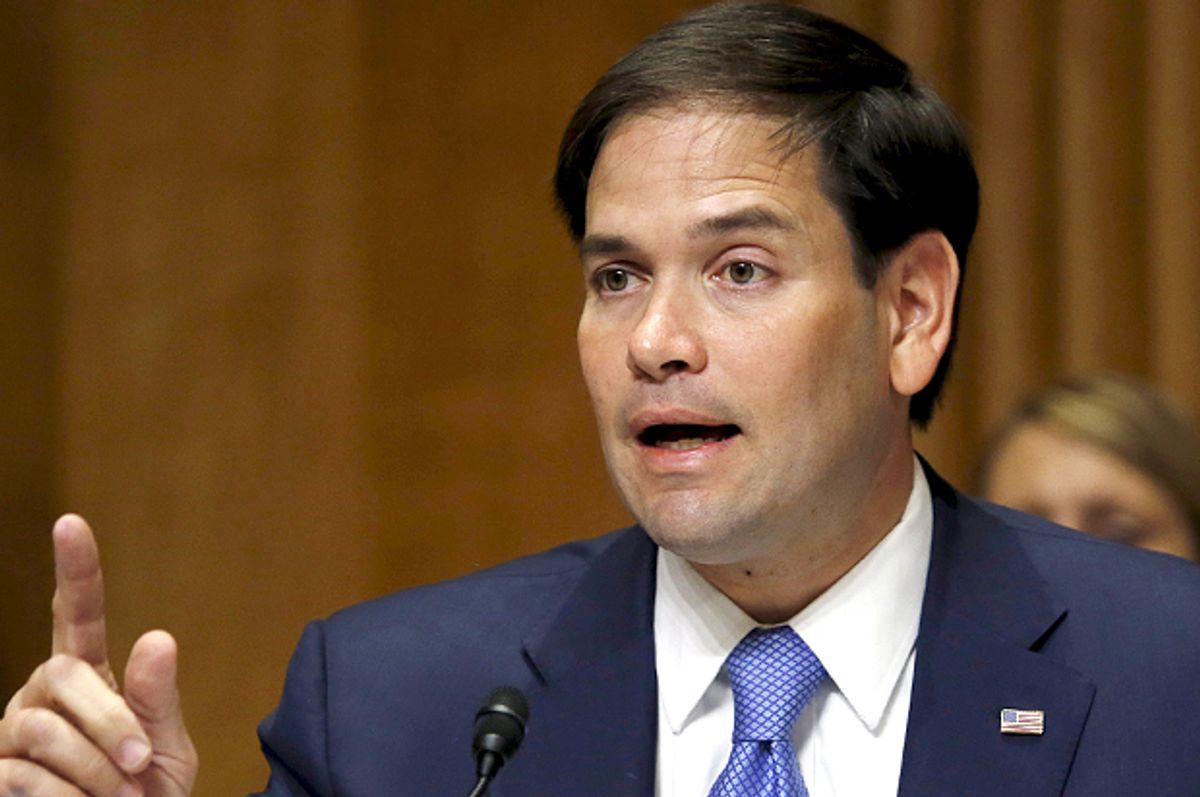 Yesterday, while the political world was riveted by Donald Trump’s prolonged, shambolic skid into the 2016 presidential race, the Senate exhibited a rare flash of bipartisanship and voted to permanently reject one of the more flagrantly immoral practices of the George W. Bush administration. By a vote of 78-21, the Senate approved an amendment to the FY 2016 Defense Authorization bill that would reaffirm the prohibition on the use of “enhanced interrogation techniques” – the Bush administration’s slick euphemism for “torture” – that President Obama put in place via executive order in the first days of his administration. Every Democrat voted in favor of the amendment, and they were joined by 32 Republicans.

It’s an important amendment for a number of reasons. The prohibition currently in place is secure for the time that Obama is in office, but if his successor is of the Bush/Cheney mind-set and is more amenable to using torture as a tool in the “war on terror,” then he (or she) could undo it with the stroke of a pen. If the bill as amended makes it to Obama’s desk and he signs it, then the torture ban will be backed by the force of law.

That’s significant because even as we came to learn just how slipshod, brutal and ultimately useless the Bush administration’s CIA-administered torture program was, the question of whether we would ever reinstate those brutal practices was left unanswered. Last December, after the Senate released a controversial report detailing the program’s cruel practices and wide-ranging failures, CIA director John Brennan was asked directly if the agency would ever get into the torturing business again, and he said it would be up to policymakers. “We are not contemplating at all getting back into the detention program, using any of those EITs,” he said at the time, “so I defer to the policymakers in future times when there is going to be the need to ensure that this country stays safe if we face a similar kind of crisis.” Having a torture ban on the books makes it less likely that this will happen.

The Senate vote was also important for the split it revealed among the Republican politicians running to be the person to replace Barack Obama. There are at this moment four sitting senators running for the White House, and three of them cast votes on the torture amendment yesterday. Both Rand Paul and Ted Cruz voted for the amendment, in keeping with their past statements that torture is unambiguously immoral and wrong. Lindsey Graham voted against the amendment because while he believes torture is wrong, he disagrees with having the Army Field Manual “serve as the sole interrogation program available to our nation.”

And then there’s Marco Rubio. Rubio didn’t vote because he was off doing whatever. But he has strong opinions on the matter! His office issued a statement after the vote insisting that had he actually been there, he would have voted against the amendment because we need to keep the torture card in our deck to show our enemies we’re strong and tough:

As for the amendment, Rubio said in a statement: “I would have voted no on this amendment. I do not support telegraphing to the enemy what interrogation techniques we will or won't use.” He added that he doesn’t want to deny “future commanders in chief and intelligence officials important tools for protecting the American people and the U.S. homeland.”

There’s precious little evidence that torture was an “important tool” in protecting the U.S., but it seems pretty clear that Rubio would be perfectly happy to rescind the Obama prohibition on “enhanced interrogation techniques.” The same Marco Rubio who wants torture available as a tool in his presidential arsenal is also a harsh and vocal critic of other governments that employ torture and commit human rights abuses.

This pro-torture stance is part of Rubio’s broader campaign to be the new president of the new century that revives literally every bad foreign policy and national security decision from the Bush administration. It’s also in keeping with Rubio’s very Bush-like focus on “security” as being the first and only determining factor in what American policy should be – “Nothing Matters If We Aren’t Safe,” as the Rubio campaign slogan puts it.

I guess it’s somewhat heartening that we’re at a place now where not all Republicans are reflexive supporters of the Bush-era terror policies that contravened American values and destroyed our moral standing in the world. But it’s still wildly depressing that we’re even having a debate over whether torture is an acceptable practice for the government of the United States to pursue.