How did I get home last night? My bizarre, panicked life as a blackout drinker

I fell down staircases. I woke up in strange homes. When you love booze like I did, it's amazing what you'll ignore 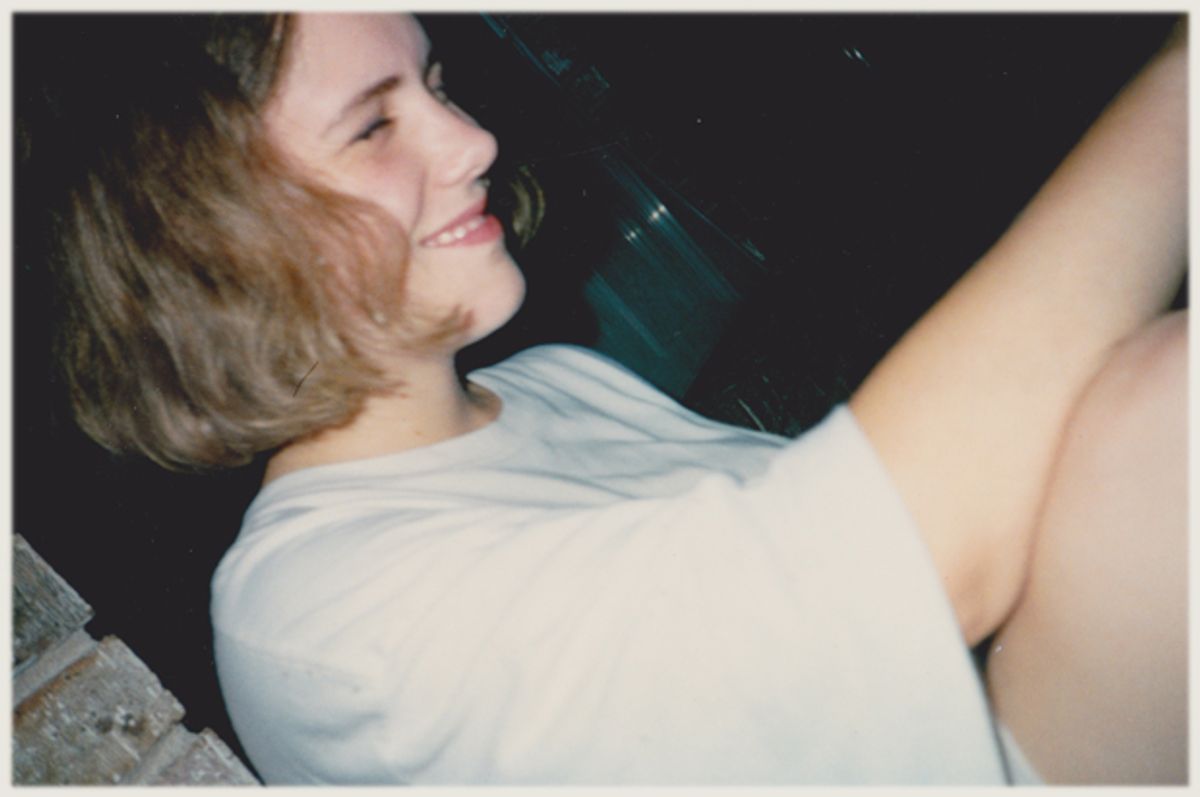 A photo of the author in college
--

The following is adapted and excerpted from "Blackout: Remembering the Things I Drank to Forget," coming out June 23 (Grand Central).

I met my friend Allison at a Mexican restaurant. We hadn’t seen each other in years. It had been so long that, as I scanned the menu and failed to listen to the waiter recite the evening’s specials, I couldn’t stop my mind from tunneling back through time in an effort to pinpoint when we last hung out. This is a form of bragging for me. I pride myself on remembering more than anyone else.

“I know,” I said. “Your 36th birthday party,” and I smacked the table like it was a buzzer.

That party was such a blast. Three years later, I can still remember so much about it: How her cozy Park Slope apartment was strung up with Christmas lights. How I planned to stop by for a quick drink, maybe three, before heading to another party across town. How I charmed her chic 20-something colleagues from the online fashion magazine with my big ideas about female comedians and sex.

But of all the details I can summon, one I cannot is how I got home that night. Trying to remember the end of that evening now is like watching a movie with a reel of film missing. I'm talking to this girl on the back porch, I'm laughing with this girl on the back porch, and then … the screen goes blank. CUT TO: Me, in my Williamsburg loft at 6 a.m., the white curtains billowing in the breeze.

I’d had blackouts since the first time I got drunk. If you’ve never had a blackout, then you might not understand the singular horror of waking up to discover that time is missing. People often confuse blackout with passing out, but the experiences are quite different. A person who is passed out is unconscious. A person in a blackout is very much awake: Walking, talking, singing bad karaoke. You keep going, even as your long-term memory shuts down. Sometimes my blackouts were only a few minutes, a temporary outage, but a few lasted hours, and the first 10 seconds of a hungover Sunday morning were a checklist of panic: Did I remember how I got home? Was anyone lying beside me? Did I have any cuts or bruises? I woke to strange data sets. Orange juice on the counter, refrigerator door flapping open. My vibrator tossed on the living room couch. Once I woke up with a half-eaten corn dog in my hand and a smear of mustard across my face. But I was starving, so I ate it.

Allison leaned in at the table. “Oh my God, do you remember that night?” she asked, and I braced myself. Anyone with a drinking history learns to hate those words. The wrecking ball is about to arrive.

“You fell down my staircase."

I covered my face with my hands and peeked at Allison through the slats of my fingers. “Yeah, I used to do that.“

"My stairs were marble," she said. "It was terrifying. Honestly, I'd never seen anything like it. You don’t remember this at all?”

No, but I was familiar with the habit. By my mid-30s, I had drunkenly tumbled down rickety outdoor wooden steps and glamorous winding staircases. I don’t know what’s crazier: That I drank as long as I did, or that I kept wearing heels. Once, I tripped down the narrow metal staircase of a Turkish restaurant on the Lower East Side of Manhattan and wound up in St. Vincent's hospital with a concussion and the world’s most excruciating hangover. But what was most remarkable about these extravagant nosedives was how painless and without consequence they often were. I'd get up, dust myself off, and grab another drink. OK. What's next?

“I can’t even remember how I got home that night,” I told Allison.

Thank God for cabbies. Other people can give teary testimonials to the cops and the fire department, but as far as I'm concerned, cabbies are the superheroes of New York City. They have ferried me safely home when I couldn't see straight -- I mean, when I literally held one hand over an eye to keep from spinning. They have driven me up and down the same few blocks while I tried to figure out which of the blurry row houses was my blurry row house.

"I'm so sorry," I said to Allison, hands still shielding my face, as though I could somehow hold in the embarrassment.

"No, I'm sorry," she said. "I felt bad putting you in that cab. I wanted you to stay the night at my place."

In addition to being a sot, I was stubborn to boot. I sometimes bristled when people tried to take care of me, as though they were telling me I threw like a girl. I'd stagger off into the night: I'll show you. Whenever I woke up on a friend's couch, it was a sign that something had gone wrong. Not only had I been too drunk to remember; I'd been too drunk to escape.

When the blackouts first started happening, they could derail me for days. In college, I woke up from one blackout feeling like a kidnapping victim emerging from the trunk of a car: How did I get here? Who did this to me? In my 20s, I'd spend hours writhing in bed trying to reconstruct the night, imagining with a full-body cringe what boozy gimmick I'd pulled from my bag of tricks: Did I flash a stranger? Throw beer in people's faces? Force everyone to watch me perform songs from “Jesus Christ Superstar"? But by the age of 33, when I went to Allison’s party, I had grown weary of these convulsions of anxiety. I was the kind of person who could spend an hour flinching over a misplaced comma in a story; I didn't need to take a deep dive into what might or might not have occurred in the course of two lost hours.

So what I can remember about waking up after Allison's party is that I simply did not remember. If I had any bruises or scrapes from my fall, they did not throb or otherwise snag my attention, a detail that is sad in its own quiet, neglectful way. I woke up, alone, in my own bed. My earrings had been removed and placed in the bathroom drawer. As far as I could see, nothing was amiss.

I wondered that morning if I should text Allison. “Had a great time last night! The part I can remember was amazing!” Or maybe I should call and apologize. But apologize for what, exactly? I needed my own fill-in-the-blank letter of apology:

In the end, I sacked out on my futon, watched a marathon of reality TV and ordered pad thai. It was years till Allison and I saw each other again.

I avoided a great deal in those days. I avoided credit card bills that piled up on the counter. I avoided full-length mirrors. I avoided doctors, since I did not have insurance. I avoided going to the same bodegas and wine stores too often, keeping several in my regular rotation lest the cashiers get any ideas about me. And when I behaved badly in the company of a drinking companion, I simply avoided her, too. This was incredibly easy to do in a city where "the G train" served as a suitable excuse for failing to visit close friends.

I should have just emailed Allison. It wouldn't have been hard. But there was something so debasing about having to ask another person: What did I do? Can you help me remember?

Instead, I mentioned my evening to a friend who lived down the street. "I'm sure you were fine," she said, and gave me a comforting rub on the back. The white lies women tell each other: You look great in that dress. No one will notice that thing on your head. I'm sure you were fine.

Surely, I was fine. I was fine, sure. She and I cracked a bottle of red wine in her apartment, and it was like my insides shifted back into place. OK. What's next?

"I was worried about you that night," Allison told me at the restaurant.

"I'm sorry," I said. It was the fifth time I’d said it. I wish the vocabulary here were more varied. I'm sorry. I apologize. I wish I hadn't done that. Part of the reason I stopped calling friends the morning after was that I grew tired of hearing the same dumb words crawl out of my mouth. I got tired of hearing the same words from them, too: I'm worried about you. You need to keep it together. And then part of the reason I stopped calling was that I didn't want to know what happened. I couldn’t hear it anymore. Every problem drinker struggles with denial, but blackout drinkers have a particular burden. If you don’t remember a thing — did it really happen? The blackouts were a terror, but the blackouts were a kind of protection too, like someone pulling the shade down in front of my drunken behavior and telling me I didn’t really need to know.

If I reflect on my drinking years now, what I remember first is how amazing they were. The promise of a cold beer in my tired hands, the perfect pop of a cork coaxed from the bottle at 6 p.m. Drinking rescued me from the dull ache of ordinary life -- a life spent waiting for life to begin -- and I can't imagine my college years, the wandering of my 20s, the striving of my early 30s without it. Alcohol was the glue that bound everything together: my friendships with women, my romances with men. Even my career in media seemed to improve with a glass of wine in my hand. Sometimes I think I won't ever feel lighter, or more powerful, than when I was drinking.

“You sure drink fast,” a guy would say, watching me down a beer, and I would lick the foam from my lips. Damn straight.

But if I dig deeper, it's not long before I remember the blackouts. How disorienting and spooky they were. I could not shake the fear of what could have happened but didn't. What did happen -- and couldn't be fixed.

I tried so many tricks to avoid them. I stopped drinking bourbon. I drank a glass of water between cocktails. I cut out red wine before dinner, and then red wine after dinner. I moved to a new city. I got a new job. I went on antidepressants. I pledged myself to the gods of yoga and Vitamin Water. But here is the truth that I could not outrun: When I drank, I kept drinking. And if I drank enough -- and God knows, I usually did -- I would black out. It wasn't an accident; it was an inevitability.

It’s been five years since I quit, and I’d be lying if I said I didn’t miss it sometimes. But for all the crashing good times that drinking gave me, it brought me so much shame. So much horror. So much regret. So many conversations like that evening with Allison, four years ago, when my dark past landed in my lap like a tossed grenade. The blackouts are what leveled me, and they haunt me still. The nights I can't remember are the nights I can never forget.