"Inside Out": Pixar's sad and sweet new adventure explores the mind of an 11-year-old girl 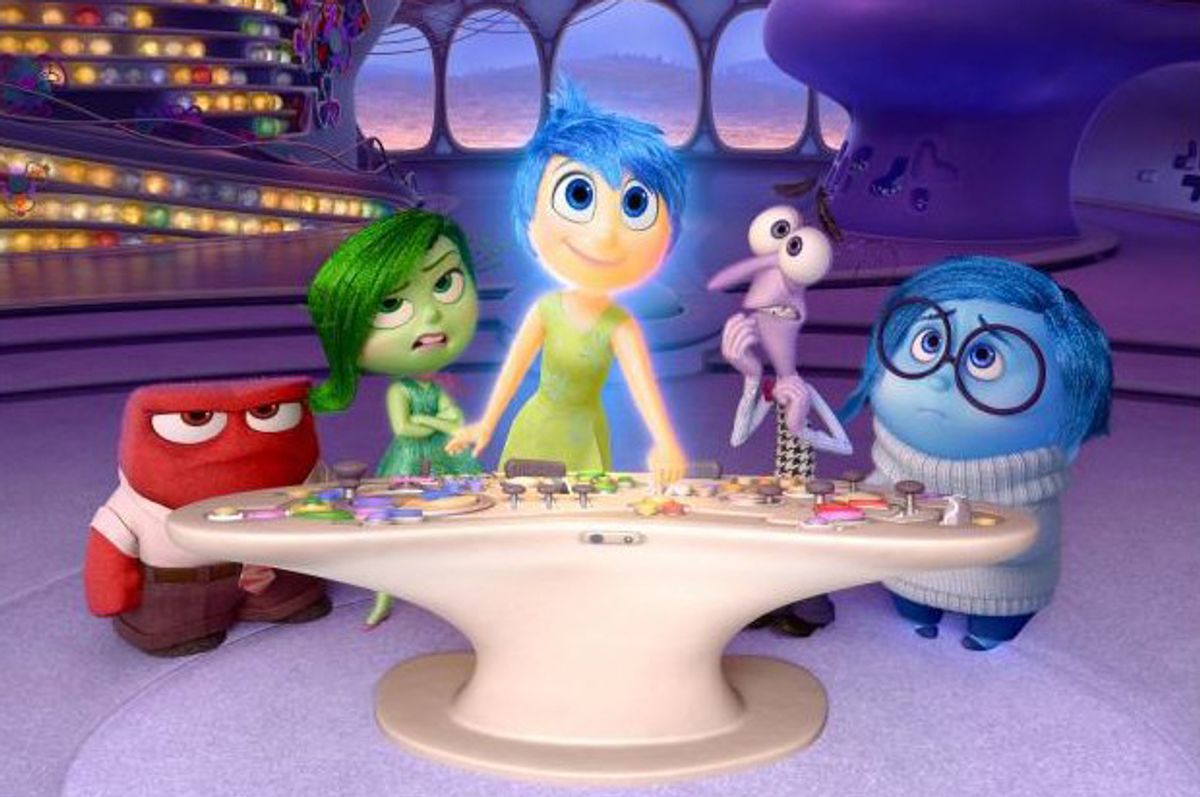 Pixar, the pioneering studio that has driven the double-edged sword of digital animation deep into the heart of our culture, has long thrived by making films ostensibly aimed at children whose real audience is their parents. Or, even more to the point, films whose real audience is children who are all grown up, children possessed of consumption power, whether or not they have literal offspring of their own. This represented the contemporary evolution of an old idea: Going back to Walt Disney and the invention of the “family movie,” and before that deep into children’s literature, there always had to be a handful of jokes calculated to sail over the heads of the tots, and just enough sophistication to rope in wayward adult emotions.

But there’s an enormous conceptual gulf between Disney films of the “classic” mode, from “Snow White and the Seven Dwarfs” and “Dumbo” right through “Pocahontas” and “The Little Mermaid,” and the consistently elegiac and nostalgic childhood’s-end fables of the Pixar era. If you’ve ever wondered why Pixar’s animators have never gotten around to adapting “The Velveteen Rabbit,” Margery Williams’ 1922 classic about the boundary between childhood imagination and adult reality, it’s because they don’t have to. Almost every Pixar film is “The Velveteen Rabbit,” transmuted into some new fictional universe but built upon the same question, perhaps the most profound and tragic ever framed in the English language: “Of what use was it to be loved and lose one’s beauty and become Real if it all ended like this?”

Before following this thread too much farther down what could be a long and winding detour, let’s skip ahead to “Inside Out,” the much-ballyhooed new Pixar film from Pete Docter, who has written and/or directed several of the studio’s previous hits, including “Up,” “Monsters, Inc.” and the first two “Toy Story” movies. It’s a thoroughly charming fable with at least some scientific grounding in brain research and our partial understanding of how personality is formed, set both inside and outside the brain of an 11-year-old girl. Possibly it was overhyped by Cannes critics who simply got sick of wallowing in adult-grade misery. We’re not talking about the greatest dramatic exploration of human adolescence since “The 400 Blows” or anything. As for the long-standing Pixar problem of how to represent human beings in digital form while avoiding the rubber-zombie “Polar Express” nightmare effect – well, we may have gotten more used to it but it hasn’t been solved.

If “Inside Out” is unmistakably another “Velveteen Rabbit” story, and one conspicuously calculated to reduce adults to tears – as when the girl’s childhood imaginary friend is discovered, banished but not quite forgotten, deep in the twisting corridors of Long-Term Memory – it’s also a work of nifty craftsmanship and considerable complexity beneath its unassuming surface. In the film’s outermost layer, the “real world,” Riley (voiced by Kaitlyn Dias) is a tomboyish only child, a happy-go-lucky hockey player whose parents have just uprooted her from Minnesota and moved to San Francisco. We spend most of our time, however, within the capacious realm of Riley’s brain, where the perky and universally beloved emotion known as Joy (voiced by Amy Poehler) has long held sway over a team that also includes blue-hued Sadness (Phyllis Smith), twitchy, bow-tied Fear (Bill Hader), crimson, cubical Anger (Lewis Black) and verdant, ultra-feminine Disgust (Mindy Kaling).

Docter has said that “Inside Out” (which is co-written and co-directed by longtime Pixar animator Ronnie del Carmen) was inspired by watching his own daughter grow up and by relationships within his own family. That simplicity may limit the film’s audience to some extent: Riley is unmistakably a child of the white American middle class, and if her parents can afford a house in San Francisco (no matter how unprepossessing she finds it) then by any reasonable standard they are loaded. But the specific character of Docter’s story has a real resonance, and one of the film’s most powerful subtexts is the suggestion that Riley’s parents (voiced by Diane Lane and Kyle MacLachlan) are emotionally dependent on her. Without quite realizing it, they rely on Riley to be the “happy girl” who is carefree and resilient no matter what; they haven’t noticed either that she is changing or that the cross-country move has shaken her sense of herself and her place in the world.

Mom and Dad are no better than supporting players, the Rosencrantz and Guildenstern of Riley’s internal drama. Cut off from the brain’s control room by a series of traumas, Joy and Sadness must wander through the back hallways and storage rooms of Riley’s mind, trying to figure out what is happening to all the seemingly permanent structures of childhood. Aided by Bing Bong (Richard Kind), the aquatic broom-tailed purple elephant who was once Riley’s constant companion, they visit the Land of Imagination, the Realm of Abstract Thought and even the Subconscious, there to awaken a truly terrifying birthday clown worthy of Stephen King. (A word to parents of young children prone to nightmares: The word is no.)

This is all sweet, sad and lovingly constructed, with dashes of wry Pixar humor: The cynical pros at the TV studio where dreams are constructed, the dull-witted security guards at the gates of the Subconscious, the chewing-gum commercial that will not go away, even as precious childhood memories are literally vacuumed into oblivion. I have to say, though, as the parent of an actual American 11-year-old girl: Wow, do Riley’s parents have it easy! She’s sad about moving away from all her friends and the place she grow up, she has a minor tantrum and threatens to quit hockey, and there’s another entirely predictable and not all that convincing plot twist after that. The looming specter of puberty and relationships with boys are barely mentioned, and the cutthroat, competitive quality of friendships between girls never comes up at all.

“Inside Out” marks another milestone (after “Brave”) in Pixar’s quiet exploration of feminism; as a co-worker observed, it takes nerve to make an entire film about a tween girl’s inner life instead of a universe of talking toys or anthropomorphized automobiles. Consciously or not, I suspect Docter is also trying to balance out the audience dynamic, and create a movie that might appeal to actual kids. During what might be called Pixar’s high-modernist period, with “Toy Story 3” and “WALL-E” and “Up,” it sometimes felt as if the grand parables about civilization were literally driving the little ones out of the theater. Children who did see those films may well have been puzzled by the dominant themes of regret and loss, sin and forgiveness, mortality (and even apocalypse) ambiguously redeemed. Was this supposed to be Saturday afternoon cinema for the whole family, or a series of illustrated extracts from the Norton Anthology of Poetry?

“Inside Out” never has that feeling that it’s trying to encode a Holocaust discourse, the paradoxical universe building of Philip K. Dick and St. Augustine’s ruminations on time into 90 minutes of animation. It’s a lovely film that requires a little patience and a friendly disposition, and may be too low-impact to thrive amid a summer of grotesquely overengineered sequels. Its actual audience, I suspect, consists of younger kids eager to protest or debate Bing Bong’s exile to the gulag and grown-ups who long to recapture all the things in their own lives, and their children’s, that cannot be recaptured. It isn’t a movie for real-world 11-year-olds, who have quite enough on their plates without indulging the doleful Proustian fantasies of their parents.