It seemed crazy to hire a painter with Tourette's. Boy, did I get a lesson in "broken" and "normal" 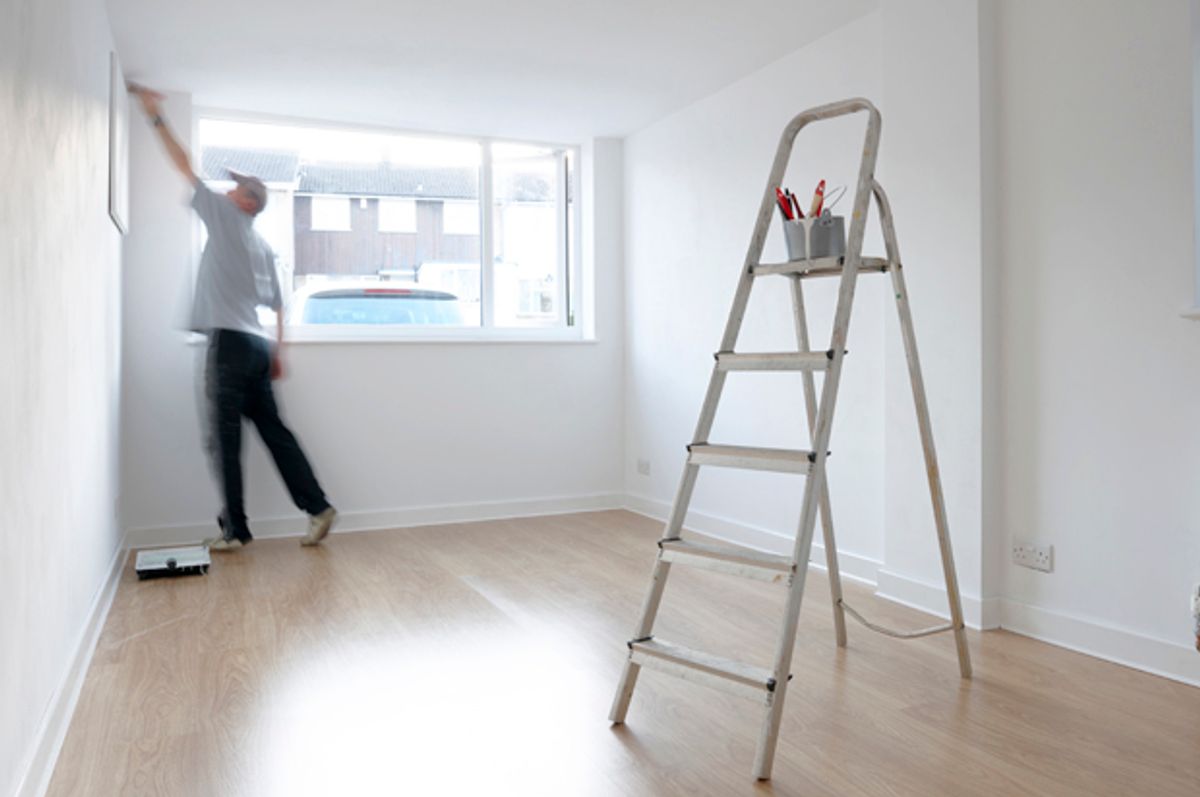 I never expected to learn a life-changing lesson about the power of the mind from a total stranger in my own living room.

We were at the tail end of a massive one-year remodel. The subfloors were finally down, the windows installed, and the studs that had been exposed just a week earlier were now covered up with drywall and a pristine layer of plaster. Our contractor said it was time to talk about paint.

“I’d like to bring in this guy Jesse,” he told my husband and me, matter-of-factly. “He’s the best painter I know. But here’s the thing … he has Tourette syndrome.”

He went on to describe Jesse’s tics. How his head jerks to one side and his hands twitch, especially when he speaks. That he would often blurt out random sounds or mutter under his breath. Sometimes, when he’s nervous, he has a hard time getting his words out, so we’d have to be a bit patient.

None of that bothered me much. I didn’t mind his physical and verbal tics, or slowing down my typically fast communication style. But I’ll admit, I looked around at my brand-new, perfect walls, wondering why on earth I’d let someone who couldn’t control his speech and movements go anywhere near them with a paint brush.

Our contractor shrugged it off with a laugh. “Oh, Jesse will be fine.” My husband and I looked at each other, and he must have known what we were thinking. “Trust me,” he said.

Jesse showed up, blond, short and thin, greeting me with a shy smile and a firm handshake but never making eye contact. His gaze was still fixed on my shoes as he complimented our beautiful new home and thanked me for the opportunity to paint it.

We walked around the house, talking about the colors we were considering for each room. He made thoughtful suggestions, constantly ticking and occasionally stuttering, while I took notes, asked questions and hid my concern.

Jesse returned the next day with rollers, brushes and paint drums. It didn’t take him long to prep, and soon he was ready to start working on the living room. As he climbed the ladder, I could hear him muttering to himself. I also noticed he hadn’t used any painter’s tape to ensure those sharp, professional-looking lines.

Our contractor was standing within earshot. “No tape?” I asked under my breath.

Jesse dipped his brush into the can, and then brought it to a corner. He slid it across the wall, right where it met the ceiling, using a steady hand and a strong stroke.

“Wow, this is a nice color,” he called out to me, loud and clear, never taking his attention away from his task. “Come back in a few hours and I’ll have this entire wall done. I think you’ll like it a lot.” His movements were fluid. He didn’t tic. He didn’t blurt. And he didn’t stutter, not once.

I stood there frozen and in awe, completely fascinated by the flawless line he was creating. When I finally moved in closer, he realized I was watching him.

“I know it’s strange,” he said in a softer voice this time, again without breaking concentration. “When I’m painting, it all goes away. It’s like … I just need to distract my brain with something else.”

Goosebumps covered my arms and tears stung the corners of my eyes. I didn’t feel comfortable asking him about his disorder, so I asked him questions about the paint instead. Was the coverage good? Would we need more than two coats? I didn’t care, I just wanted to keep him talking, keep him painting, keep marveling at the way his tics stilled completely the moment his brush connected with the wall.

Over the next two weeks, I stole glances at Jesse as he worked. It was the same every time. He ticked and muttered under his breath as he climbed the ladder, but once he picked up that brush, he was complete in control of his body.

Our walls are absolutely perfect. And he never used a single piece of painter’s tape.

Jesse stuck with me over the years. Because from the outside, his brain appeared to be broken and lacking. But it wasn’t. It just worked differently. And it was capable of doing something most “normal” brains could never do.

After I met Jesse, I began to notice these special-minded people all around me, and I found myself intrigued. I enjoyed talking with them, because I knew sooner or later I’d learn about each one’s “paint brush.”

A good friend’s son also has Tourette’s. Everyone knows how much he loves baseball, but very few people know that he also writes the most beautiful poetry. My favorite is about a boy who only feels like a “normal kid” when he’s standing on the pitcher’s mound, gripping the ball. Because that’s when his tics disappear.

At a dinner party a few years ago, I sat next to a woman with synesthesia. She told me she used to feel overwhelmed by the disorder that made her hearing and vision senses cross wires, but she eventually learned to embrace it. She told me she now felt sorry for people who didn’t have her condition, because they’d never know the color of their children’s voices or see a symphony.

Another friend has a son with Asperger’s syndrome, a disorder on the autism spectrum that affects one's ability to interpret social cues. He has many unique gifts, from brilliant storytelling to off-the-charts math skills, but ask any of his classmates what makes him stand out, and they’ll tell you how genuinely funny he is. The other day, I overheard him say, “I do weird things sometimes. But I like being weird. It makes life so much more fun.”

A few years ago, a close family friend was diagnosed with OCD and depression at age 12. I’ll call her C.

I’d been following what was going on in her life — years of debilitating insomnia, fights with her girlfriends that occasionally led to full-scale panic attacks, and troubling thoughts that came out of nowhere and took up residence in her mind. I’d been struggling with insomnia myself, and I certainly remembered dealing with complicated friendships when I was young. But this was different. OCD made her afraid of her own thoughts. I couldn’t imagine how horrible that would be, especially for someone so young.

The diagnosis might have been a surprise to C’s parents, but they weren’t shocked to learn that their daughter’s brain was highly active, both in positive and negative ways. They worked in lock step with her psychiatrist, who prescribed medication that helped her sleep at night and quieted her mind during the day. They interviewed therapists until they landed on one C felt she could trust and confide in. And they helped her channel her energy into something she loved—acting and singing. Because when she’s up onstage, under the lights, she’s not afraid of anything.

Watching C and her family inspired me. When I asked them if I could write a book about a girl with OCD and draw upon some of their experiences, they agreed immediately and wholeheartedly.

My new novel, "Every Last Word," is about a girl named Samantha who looks perfect on the outside but feels broken on the inside, until a secret poetry club and its misfit members help her see herself in a whole new light.

It’s told from Samantha’s perspective, but the people who inspired me over the years are also scattered throughout its pages. Sam uses a baseball trick to dispel negative thoughts. Her therapist shares an important lesson she learned from a patient with synesthesia. Her new friend Caroline celebrates her own weirdness. And, in Jesse’s honor, she meets a boy named AJ whose severe stutter disappears completely the moment he picks up his acoustic guitar.

Because of them, it’s not a story about a girl with OCD. It’s a story about being exactly who you are and surrounding yourself with people who get you.

It’s a story about finding your paint brush.

And I silently thank him for these perfect lines, a constant reminder of the awe-inspiring power of a mind that works differently.

Tamara Ireland Stone is the author of "Time After Time" and "Time Between Us," as well as the just published "Every Last Word." A former Silicon Valley marketing executive, Tamara lives just outside of San Francisco with her husband and two children. Here's more information about "Every Last Word."