Jeb's medieval politics of shame: Upholding a long tradition of keeping women and girls in line

Cersei's "Game of Thrones" humiliation wasn't some ancient relic—public shaming is alive, political, and even viral 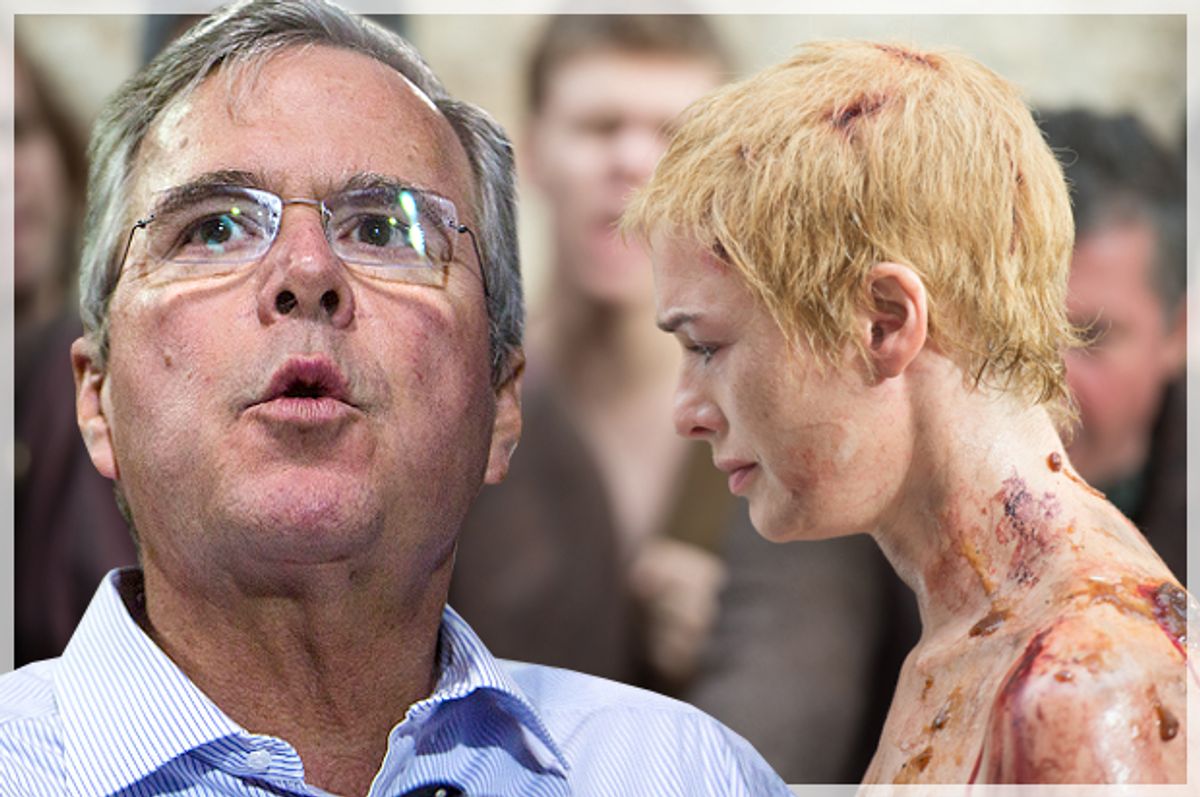 On Sunday night, in one of the climactic scenes in the finale of "Game of Thrones," Cersei Lannister had her head roughly shaved by merciless nuns, then was paraded, naked, on a long walk of atonement through the city of King’s Landing. As the populace of the fictional city gathered, jeering, calling her a whore, exposing themselves and throwing filth, I kept thinking about Jeb Bush.

Bush declared he was running for president on Monday, in an act of political theater designed to match any spectacle from bygone eras (though the “Jeb!” logo reminded me mostly of musicals like "Oklahoma!" "Carnival!" or "Hello, Dolly!").  In the run-up to the announcement, Huffington Post reporter Laura Basset unearthed Bush’s support for an entirely different kind of spectacle – the public shaming of fornicators.

In a 1995 book, Bush called for the “restoration of shame.” He blamed out-of-wedlock births on a lack of ridicule for “irresponsible conduct.” Once upon a time, he lamented, “Public condemnation was enough of a stimulus for one to be careful.” He continued, “Infamous shotgun weddings and Nathaniel Hawthorne's Scarlet Letter are reminders that public condemnation of irresponsible sexual behavior has strong historical roots.”

This kind of attitude doesn’t just belong to fictional worlds like "Game of Thrones," remote historical time periods, or now out-of-date campaign books. Bush tried to put public shame into practice when he was governor of Florida, which is bad enough. More recently, we’ve seen just how dangerous using shame to control female sexuality can be. Last month, 13-year-old Izabel Laxamana sent a selfie to a boy. Her father found out, forcibly cut off her hair, and took a video of her shame. The video spread and Laxamana flung herself off a bridge onto a freeway, killing herself.  Public shaming of women and girls for their behavior has a 21st-century body count.

Cersei is, of course, a major villain of the show. She’s directly or indirectly responsible for many of the horrors that have been visited on the fictional world of Westeros. The scene was intended to garner sympathy for a previously hated character, and it worked.  Like many other episodes of violence against women in the show, it was justified on historical grounds. Her shaming was loosely based on Jane Shore, the 15th-century mistress of Edward IV who, dressed only in her underclothes, did a penance walk through late medieval London. Other examples of historical shaming of this sort included men and women alike.

Cersei was punished for adultery (though viewers know she has many more crimes) with her relative, Lancel Lannister. Defenders of the constant violence against women in "Game of Thrones," including Cersei’s walk, tend to focus on the veracity of its faux-medieval context. For example, Eugene Simon, who plays Lancel, said, “I think you have to understand 'Game of Thrones' is set in a fantasy world. The underlying society is medieval. It was certainly horrifying, but it wasn’t just meant to horrify, I think, because the position of women during medieval times was so appalling.”

Lena Headey, too, suggested that there was a kind of reality to the difficult scene, though she distanced herself more in terms of space than in times. An interview with Entertainment Weekly reads, “Headey notes that such primal public violence against women isn’t exactly something that’s only a historical issue, either. 'They still do it now,' Headey said. 'They take women out and stone them to death.'” But notice the “they,” as if such acts belong solely to some undefined other.

We have to be careful, though, in extending the umbrella of authenticity to shield such scenes from criticism. As Kathleen Kennedy points out, such medieval acts of penance were generally intended to restore community, not just to humiliate and ostracize, and such a restoration is not at all clear in this case. Moreover, she said in an email to me, many of the public acts of humiliation that we associate with the Middle Ages more accurately belong to the more recent early modern era (including the infamous "Scarlet Letter").  She wrote, “Institutionalized public shaming grew more common as the Middle Ages progressed, but it was by no means limited to women or to punishing sexual impropriety. The Reformation accelerated the practice of public shaming, so what we think of as 'medieval' shame culture is likely to be Early Modern.”

Shaving heads to shame women for their perceived sexual impropriety has, in fact, a robust history throughout the modern period, perhaps culminating most famously in iconic images of French women being shaved and sometimes stripped for the “crime” of sleeping with Nazis. Laxamana’s father didn’t come up with the idea of cutting his daughter’s hair in a vacuum, but drew from a deep cultural well and lots of viral news stories.

Public shaming by parents has become extremely common. It’s fueled by the power of social media to magnify disciplinary acts into viral stories.  For girls, it focuses on sexual activity, public shame and hair. Parents have shamed their children, especially daughters, by making them hold up signs to the world declaring their sins in an act of public atonement, or by forcing them into particular clothes or hairstyles, then posting the results to the Internet. Sins include generalized disrespect, breaking curfew, talking smack, twerking, wearing short-shorts and sneaking boys into the house. A mother shaved her daughter’s head and posted it to Facebook for the sin of brushing it the wrong way. A father forced his daughter to wear childlike pigtails for “acting too old.” Another shot his daughter’s laptop for complaining about chores.  And it’s not just parents. A Utah judge offered to reduce community service hours if a mom cut her daughter’s ponytail off in the courtroom, as a way of humiliating her.

The judge is where I go from angry to frightened. It’s a problem that so many parents turn to shame (and of course corporal punishment and other abusive practices), true. But the state has an asymmetric level of power in comparison to any given citizen. When Bush invokes shotgun weddings, he’s talking like a patriarchal dad, who somehow thinks it’s a good idea to threaten to commit murder if teenage lovers don’t marry. But the Scarlet Letter is a whole different magnitude of social control.

One problem for Bush is that he clearly should have failed English class. "Scarlet Letter" is a 19th-century critique of imagined 17th-century Puritan sexual mores, not an endorsement of actual public shaming practices (note to Donald Trump and his vow to build a huge wall — Robert Frost was likewise not actually endorsing the idea that “good fences make good neighbors”).  To read Hawthorne’s novel and come away approving of Puritan public shaming practices is like rooting for Sauron to win in "Lord of the Rings."  The whole point of Hawthorne’s book is that shame is applied in ways that reinforce the worst aspects of society.

In the days since the story broke, Bush suggested his ideas have “evolved” since writing the 1995 book, but still argues that his analysis of society’s ills – a lack of husbands – is correct. It’s tempting to write Bush’s remarks off as a product of so-much “moral majority” posturing in the early '90s GOP, but that would ignore his track record as a governor. In 2001, as reported by Katie McDonough, Bush approved a bill that would have required, “Single women who wanted to put a child up for adoption to publish their sexual histories in a newspaper.” Bush and his allies may want to push his 25-year-old book off the table, but since Bush is campaigning on his accomplishments as governor, presumably this bill is fair game. Most telling, when discussing the problems in Baltimore last month, his major solution was to try to convince more poor people to get married.  This is just the politics of shame, with less Nathaniel Hawthorne.

And then we come to Bush’s anti-choice credentials. At its core, the discourse of anti-choicers embraces the need to shame women for their sexual choices, functioning as what Amanda Marcotte calls “the sex police.”  For single women in particular, the anti-choice movement wants their decision to have sex visible to the world, a warning sign to others. And Bush’s anti-choice credentials — again, drawing from his history as governor — are severe.  In 2003, Bush declared himself the “most pro-life governor in modern times." He fought to keep an intellectually disabled rape victim and, in 2005, a 13-year-old rape victim, from having abortions. He now says he is willing to consider a rape and incest exception to a ban on abortion, but that’s it. For all other women, in the views of Bush, the decision to have sex is a public matter.

Shame is a powerful tool. It can be used to shed light on prejudice and injustice, but the power dynamic between a state and a woman being shamed by the state is inherently abusive. When we take a scene like Cersei’s walk and justify it as a dramatic re-creation of a bygone era, or the kind of thing that only happens in other places, we miss the ways such dynamics continue to play out in our society. That’s not a criticism of "Game of Thrones," but a criticism of us.

The public shaming of women in order to control female sexuality is not a medieval throwback or a fictional problem, but a major part of our culture today. It killed Izzy Laxamana. And it’s still being  perpetuated by at least one man seeking to become the most powerful person in the world.