A conservative freakout over a hot commercial 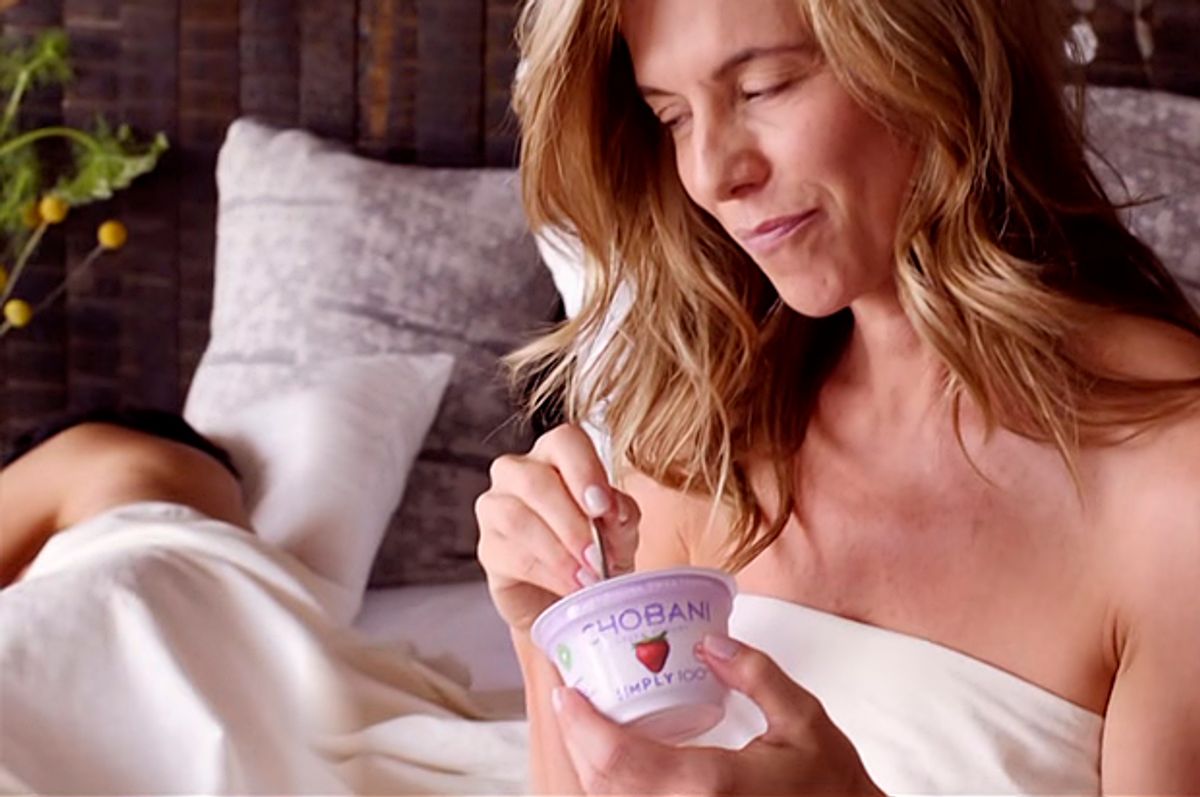 Never stop being hilarious, One Million Moms. There's your name alone, considering your 72 thousand Facebook fans. There's your always entertaining flair for going after anything that might smack of tolerance, inclusion, or joy because moms are "fed up with the trash in today's media." Remember when you went gunning for Ellen a few years ago, because how dare a lesbian be a spokesperson for JC Penney, and even Bill O'Reilly said you were on a "witch hunt"? Remember when you panicked over Ryan Murphy's short-lived NBC comedy "The New Normal," citing "the decay of morals and values"? You're a regular HOOT. And now, well, let me just put it in your words: "Chobani Attempts to Normalize Sin." And you probably thought it was just attempting to regulate your gut flora!

In a wicked sexy new ad, a tousled and clearly undressed blonde relaxes in bed, enjoying a carton of Chobani like it's an "Orange Is the New Black" marathon. She languidly licks the spoon, scoops out the remains with her finger and looks slyly over at her sleeping bedmate, whose foot she teasingly strokes. Then she gets up, pulling the sheet with her, and her partner — who like her is clearly wearing a wedding ring, by the way — rouses gently and smiles. As the Moms put it, "This commercial not only promotes same sex relationships by including two lesbians, but also same sex marriage because the two women wear matching wedding bands. The ad states, 'To Love this Life is to Live it Naturally.' There is nothing natural about homosexuality." And yet somehow, birds do it, bees do it, even educated snails do it, so maybe it is. Chobani’s chief marketing officer, meanwhile, says, "We're a national food company that has beliefs, from animal welfare to equality."

The Moms do ask, somewhat reasonably, "What does selling yogurt have to do with gay sex?" and of course the answer is not a whole lot. That's what makes the Chobani ad unique and important. God knows using sex in ads in nothing new. Even using sex in yogurt ads is nothing new, and I for one approve of anything that involves John Stamos taking his pants off. Using gay people in ads in increasingly common, too — but the trend of the past few years has been steadfastly portraying them as your safe, family-friendly neighbors. Honey Maid's sweet "Love" ad from last year rode on the tagline of "This is wholesome," and more recently, Wells Fargo has been running a spot featuring a pair of nice lesbians learning sign language in preparation of adopting a deaf child. The Chobani spot, in contrast, is about two women, seemingly on a tropical vacation (honeymoon?) who are totally doing it. They are having lady-on-lady sex and using Chobani to keep their lesbian strength up!

The ad would be great even without the inevitable Million Moms freakout — a next step in acceptance, a corporate acknowledgement that gay people are, OMG, fully formed humans with desires and not sexually neutral tokens of diversity. But watching a little conservative hand-wringing on Facebook that "Global warming isn't what is going to destroy the world, it's unrepentant sin" is a nice bonus. And showing gay people as grown-ups — it's just in good taste.