Like Jon Stewart's monologue on the Charleston massacre, these tragedies were likewise handled perfectly by comics 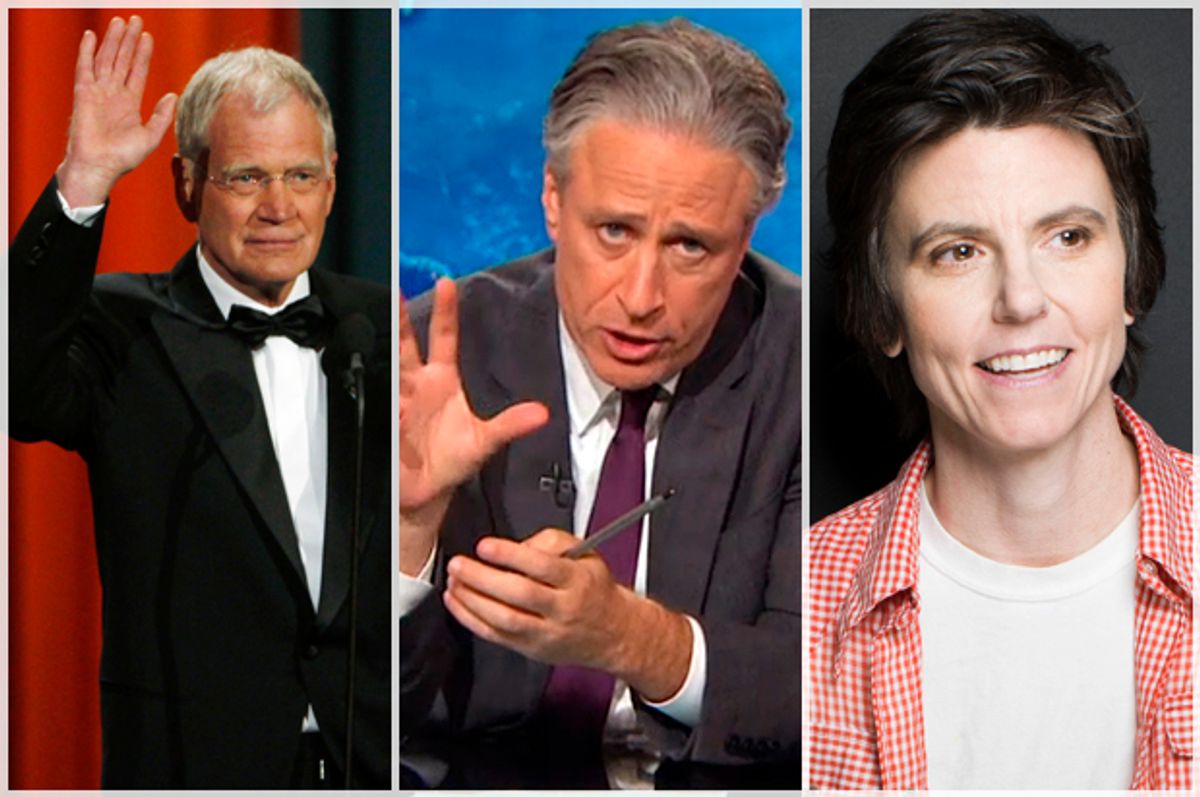 Last night, Jon Stewart gave a searing oration on the shooting at a historic black church in Charleston, S.C., transitioning, as he as often been known to do in events of national tragedy, out of a comic register and into a powerfully somber one. “I didn’t do my job today. So I apologize,” Stewart said sadly. “I got nothin’ for you in terms of jokes and sounds, because of what happened in South Carolina. And maybe if I wasn’t near the end of the run, or this wasn’t such a common occurrence, maybe I could’ve pulled out of the spiral. But I didn’t. And so, I honestly have nothing, other than just sadness.”

While we look to laughter as a relief from pain, sometimes, even comedians can’t find a way to make light of tragic events. Particularly for late night hosts who are forced to react to the daily news cycle, there have been a handful of memorable and uniquely poignant moments where comics have shed their sarcasm and their snark in favor of addressing serious issues head-on and speaking from the heart.

Here’s a look at eight times comedians harnessed seriousness to great effect, in face of tragedies on both a national and personal scale.

1. David Letterman after 9/11
Of all the late night hosts, Letterman’s monologue after 9/11 was perhaps the most powerful (his program was also the first to return to air after the attack), with the iconic late night host breaking his sardonic veneer to speak vulnerably and emotionally, in what the New York Daily News called "one of the purest, most honest and important moments in TV history.” As Letterman said, after praising Mayor Giuliani and the New York Police and Fire Department "there is only one requirement for any of us, and that is to be courageous, because courage, as you might know, defines all other human behavior. And I believe, because I've done a little of this myself, pretending to be courageous is just as good as the real thing.”

2. Jon Stewart after 9/11
Like Letterman, Stewart’s remarks after 9/11 were incredibly moving, with the host choking back tears as he gave a powerful speech about freedom and the possibility of rebuilding in the wake of tragedy. As he said -- and again, it’s worth watching the thing in full -- “Any fool can blow something up. Any fool can destroy. But to see these guys, these firefighters, these policemen and people from all over the country, literally, with buckets rebuilding. That, that – that is – that’s extraordinary. That’s why we’ve already won. It’s light. It’s democracy. We’ve already won. They can’t shut that down. They live in chaos and chaos...it can’t sustain itself. It never could. It’s too easy and it’s too unsatisfying."

3. Craig Ferguson on Britney Spears and addiction
When Britney Spears was making headlines back in 2007 for a string of bizarre incidents, Ferguson gave a wrenching speech about why he refused to make fun of her, speaking out about his own struggles with alcohol and addiction. As he put it, "Tonight, no Britney Spears jokes. Here's why: The kind of weekend she had, she was checking in and out of rehab, shaving her head, getting tattoos. That's what she was doing this weekend. This Sunday I was 15 years sober. I didn't do it for anyone else but myself. I did it because it was an act of conscience. I'm amazed that not poking fun of somebody has become a news story.”

Ferguson was a role model to many who grappled with addiction -- as Patrick Krill wrote in a piece for Salon, "Thriving in recovery and making real the idea of possibility, Craig Ferguson has been someone I could point to, even if the pointing was only in my head, part of a keynote address to the faces of doubt and voices of fear that can gather, uninvited, faster than a flash mob. That guy is like me and look how amazing he is!"

4. “SNL” after the Sandy Hook shooting
After the horrific shooting at Sandy Hook elementary school, “SNL” abandoned their traditional comedic cold opening in favor of a moving performance of “Silent Night" by the New York City Children's Chorus. The solemnity of it — and the notable departure from the formula that "SNL" has used for so many years — was a profound and moving tribute to the twenty students and six staff members whose deaths the country was still reeling from.

It also called back to another time "SNL" responded to tragedy with music -- when Paul Simon performed "The Boxer" on the first show back after 9/11, as the camera panned over to Giuliani and a group of NYPD and FDNY members.

5. Tig Notaro on being diagnosed with breast cancer
Right after being diagnosed with breast cancer, Tig Notaro performed a now-legendary set at L.A.’s Largo nightclub, kicking off the 30-minute set by saying:  "Thank you, thank you, I have cancer, thank you, I have cancer, really, thank you.” Those were there recall it as one of the most amazing sets they have ever seen. As Louis C.K. wrote at the time, “In 27 years doing this, I’ve seen a handful of truly great, masterful sets. One was Tig Notaro last night at Largo.” You can hear an audio excerpt below.

Or, as comic and writer Kira Hesser wrote: "For the first half of her set, even though she was telling the story in perfect grace and humor, I couldn’t laugh. For the second half, for the first time in my life, as far as I can recall, I genuinely laughed and cried at the exact same time, bewildered at the tragedy and the remarkably calm, clever prism through which she assessed her terrible set of circumstances."

6. Patton Oswalt on the Boston bombings
Oswalt wrote a moving love letter to Boston in the wake of the bombings at the 2013 Boston Marathon. As he wrote in the much-shared missive: "We would not be here if humanity were inherently evil. We'd have eaten ourselves alive long ago. So when you spot violence, or bigotry, or intolerance or fear or just garden-variety misogyny, hatred or ignorance, just look it in the eye and think, 'The good outnumber you, and we always will.'" Read the full piece here.

"In this country we just take it for granted that it's our right to poke fun at the untouchable, or the sacred," he continued. "But today's tragedy in Paris reminds us, very viscerally, that it's a right some people are inexplicably forced to die for.

8. Jon Stewart on Eric Garner
As you might have guessed, we are big Jon Stewart fans here at Salon, and as the country has reeled after one awful tragic racially-motivated police killing after another, Stewart’s outrage and sadness has been a mirror for our own. "I honestly don't know what to say," said Stewart, in response to the news that an NYPD officer would not be indicted for the choking death of Eric Garner. "If comedy is tragedy plus time, I need more fucking time, but I would really settle for less fucking tragedy, to be honest with you," Stewart said, adding that "we are definitely not living in a post-racial society, and I can imagine there are a lot of people out there wondering how much of a society we're living in at all. "