Republicans love to flaunt their religion, but only if it conforms to their politics. Francis just made that harder 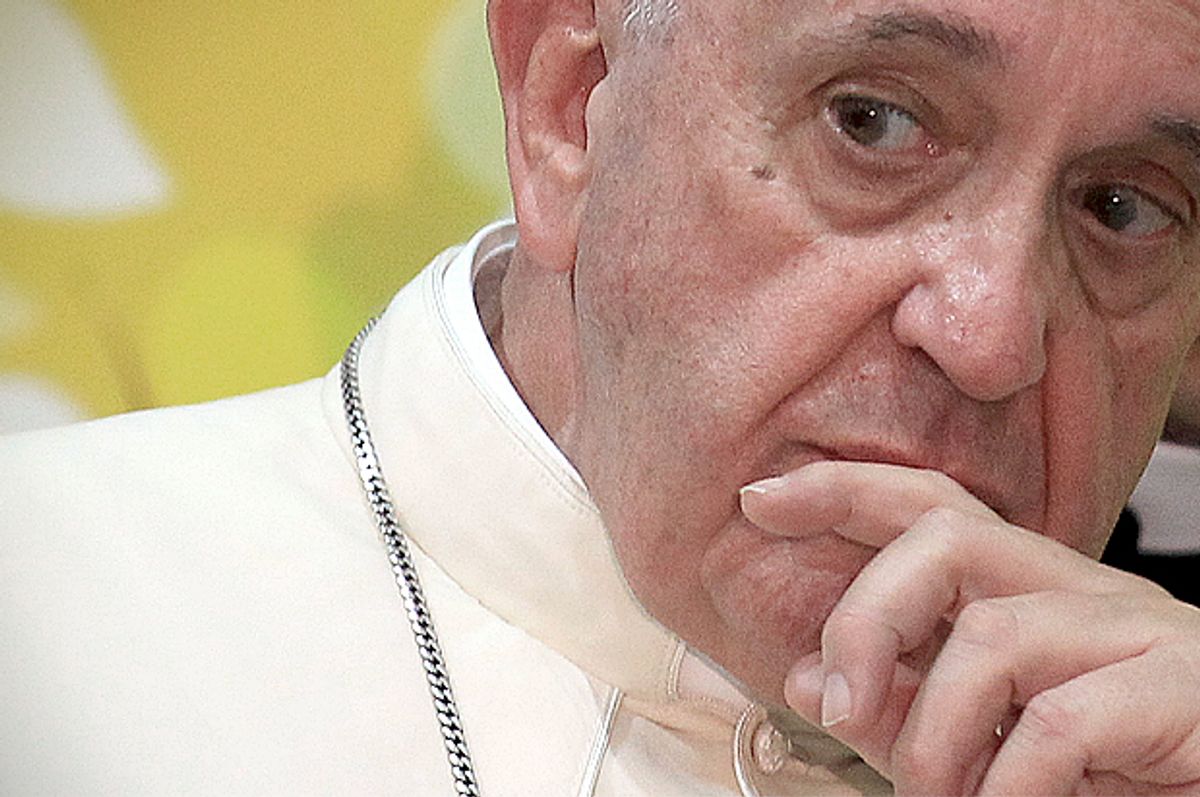 Over the past few weeks, we've heard the initial cannon volleys from the parapets of the GOP hurled in the direction of Pope Francis. But as of yesterday, when the Pope delivered a major encyclical on the climate crisis, there was a thermonuclear freakout, from not just Fox News and AM talk radio, but nearly every Republican with internet access. Already, Greg Gutfeld from Fox News Channel's The Five referred to the Pope as the "most dangerous man in the world."

Pope Francis's encyclical was specifically intended as a call to action on man-made global warming. And this particular call to action contains, among other things, the following groundbreaking line:

We are not God. The earth was here before us and it has been given to us. This allows us to respond to the charge that Judaeo-Christian thinking, on the basis of the Genesis account which grants man “dominion” over the earth (cf. Gen 1:28), has encouraged the unbridled exploitation of nature by painting him as domineering and destructive by nature. This is not a correct interpretation of the Bible as understood by the Church.

That low rumbling noise you just heard was the sound of a million paleoconservative collapsing on their fainting couches. The Pope, here, is completely undermining the religious cornerstone for the entire GOP position on the climate, as well as pollution, animals and nature in general. Simply put: Sorry, no, the Bible doesn't give us the power to ruin the planet for humans or other forms of life.

Although it is true that we Christians have at times incorrectly interpreted the Scriptures, nowadays we must forcefully reject the notion that our being created in God’s image and given dominion over the earth justifies absolute domination over other creatures. The biblical texts are to be read in their context, with an appropriate hermeneutic, recognizing that they tell us to “till and keep” the garden of the world (cf. Gen 2:15). “Tilling” refers to cultivating, ploughing or working, while “keeping” means caring, protecting, overseeing and preserving. This implies a relationship of mutual responsibility between human beings and nature.

That second rumbling noise you just heard was the sound of a million paleoconservatives Googling the definition of the word "hermeneutic." I'll use it in a sentence for their benefit: Conservative hermeneutics are often cherry-picked, inaccurate, bigoted, sexist, or just plain dumb.

At one point, the Pope gets real:

Doomsday predictions can no longer be met with irony or disdain. We may well be leaving to coming generations debris, desolation and filth.

At this point, there are three candidates officially bungee-corded into the overstuffed clown car that is the GOP primary: Rick Santorum, Marco Rubio and Jeb Bush. Catholics Chris Christie and Bobby Jindal haven't declared yet. All five Republicans deny that human activity has precipitated the crisis. In fact, both Santorum and Jindal believe the whole thing is a hoax. Santorum thinks it's a scheme concocted by the left. Jindal once referred to the climate crisis as a scam to increase the size and reach of the federal government. Christie, meanwhile, has waffled on the issue; in fact, the usually outspoken New Jersey governor has been hiding from questions about it since he began flirting with the idea of running.

One thing we know for sure: The entire GOP field will blast away at the Pope's encyclical, probably with more than few asinine comments and misstatements, because, well, it's what they do. As we've witnessed during attacks on the Pope from Bush and Santorum already, the GOP pushback will include the Catholic candidates especially, and they'll be the ones the press will seize upon for comment as often as possible.

Jeb Bush, in fact, has already weighed in, saying, "I think religion ought to be about making us better as people, less about things [that] end up getting into the political realm.”

This actually brings up an important point, because if there's one crucial aspect of this which ought to be hammered by anyone within shouting distance of the Catholics in the race, it's the issue of faith and consistency. Simply put: If it's okay for Bush, Santorum and Rubio to simply waive the Church's teachings on the climate crisis, why is it impossible for them to do the same when it comes to their religion-based positions on abortion, contraception and same-sex marriage?

Sure, it wouldn't be the first time Republicans have failed the sniff test when it comes to cherry-picking the Bible and conveniently ignoring passages that don't conform to their ideology. (Almost everything Jesus said, for example.) But given the magnitude of what the Pope has delivereed to the world this week, given the stupendous magnitude of the crisis, and given the vocal anti-climate orthodoxy of the Catholic Republican candidates, the question has to be asked.

It's really no wonder the Republicans hate this Pope in spite of their self-branding as religious zealots. Bottom line: Francis makes them look ghoulish. I'm not religious now, but I was raised Catholic. I don't like every word that comes out of the Pope's mouth, but I much prefer Pope Francis' God, and don't have any interest in knowing Rick Santorum's God.

(I especially don't want to know the wrathful asshole worshipped by California state assemblywoman Shannon Grove. Grove told a group of anti-choice activists that the drought in her home state is being caused by God in retribution for abortion access and the existence of liberal Democrats.)

The ultimate incongruity is this: The Pope has consistently, though not always, illustrated exactly how people of faith can serve the common good, while the GOP is more interested in exploiting religion to oppress, restrict and demonize. This really what’s freaking them out. And after Thursday, the rage will be thick and it'll set new records for ugliness.