Two cheers for Pope Francis: I'm no fan of the Catholic Church -- but the climate movement needs it 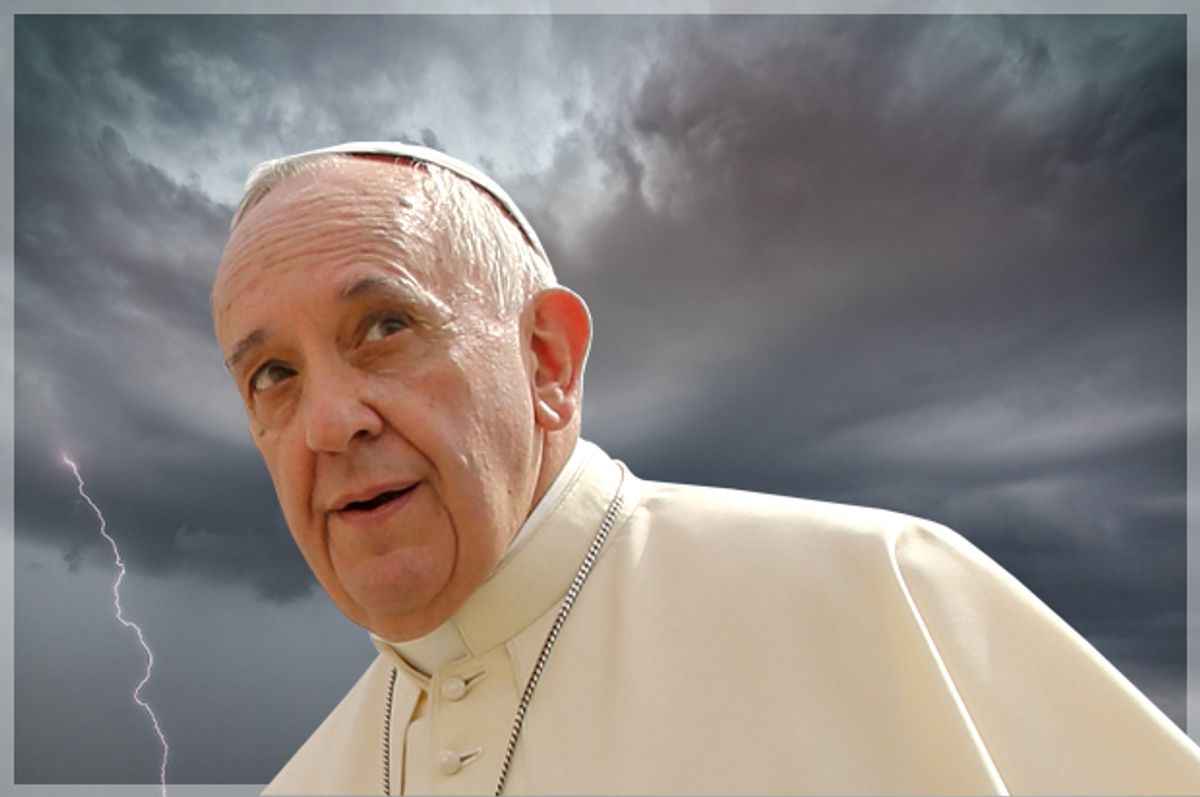 In case there was any doubt before, the release of his sweeping encyclical on the environment confirms that the climate movement has an influential new ally. More than that, even: At a time when too many leaders refuse to even recognize that our world is in peril or balk from taking the drastic action needed to protect it, it's pretty astounding to hear someone with that much global authority talk like he's been reading a lot of Bill McKibben and Naomi Klein.

It was McKibben, in fact, who expressed that sentiment quite poignantly Thursday morning:

There's no denying that the pope's decision to release a highly important text endorsing climate science, condemning fossil fuels and making a moral case for a global climate agreement is a major news event: There are an estimated 1.2 billion Roman Catholics in the world; they make up about a fifth of the U.S. population. The Internet is currently being overrun with think pieces about whether or not said Catholics will be swayed by their spiritual leader's activism, but it goes without saying that anyone with that degree of influence is going to be heard; his words considered.

So what the pope has to say matters, and the fact that what he has to say is so forcefully in favor of humanity's duty to protect the earth, and of the sort of radical societal transformations necessary to do so, is being welcomed with open arms (and surely, a bit of relief) by the environmental community. And in fact, he's made it clear that his message extends beyond the Catholic faith -- it's addressed to "every person living on this planet," actually.

"The exploitation of the planet has already exceeded acceptable limits"? Every person living on this planet definitely needs to hear that."Young people ... wonder how anyone can claim to be building a better future without thinking of the environmental crisis and the sufferings of the excluded.” As a young person, I can confirm that that's the case. But sometime around the point where I found myself retweeting a particularly well-wrought prayer for the environment translated from the draft of the encyclical that leaked earlier this week, I couldn't help wondering just how much I actually wanted to be throwing myself into the pro-pope camp.

Pope Francis may be a major moral authority, after all, but the value system from which he speaks is distinct from my own, decidedly non-Catholic one. And any value system that denies rights to women and the LGBTQ community is one I'm, in ways, uncomfortable endorsing at all. As my colleague Katie McDonough memorably put it, "cool pope" is only cool for a pope. Being the pope, he included a passage downplaying the importance of access to birth control and abortion in the developing world. In other places, while I may agree with the sentiment -- for example, that there's "a relationship of mutual responsibility between human beings and nature" -- I did not get there, as the pope did, by way of "a correct interpretation of the Bible as understood by the Church."

What's a secular, Jewish girl who had to Google the word for that stick the pope carries to do? My first step back into my comfort zone was to call up a rabbi. Rabbi Fred Scherlinder Dodd leads a Reconstructionist congregation in Maryland and has been a longtime participant in interfaith, social justice and environmental issues -- and has been advocating for the pope to take a stand on climate change for some time now. Pope Francis' potential to reach such a broad swatch of humanity with such an urgent spiritual method, Dodd insisted, represents a "breakthrough" as well as a gift, not just to Catholics, but to the entire interfaith community, because it firmly acknowledges that climate change is a religious concern.

“The religious voice is desperately needed in environmental and policy conversations," Dodd said, "because of its moral clarion call, and also religions’ unique intergenerational perspective" -- political cycles last two years, he explained, while religion tends to take the necessary long-term view of things.

We can respect the pope's willingness to take on environmental issues in such a big way, Dodd continued, without necessarily giving him a blank check. Members of the Roman Catholic Church who pick and choose which papal edicts to listen to are derided as "cafeteria Catholics," but those of us on the outside should feel comfortable celebrating, even envying, the Church when it gets something right. For Dodd, this is definitely one of those times.

“I believe that this is the Vatican at its best," he said. "I love that this pope not only understands both tradition and modernity so well, but also happens to have a master’s degree in science. His Holiness knows of what he speaks morally, spiritually and scientifically.”

Religion, it turns out, was a potent component of the American environmental movement from the outset. Mark Stoll, the director of environmental studies at Texas Tech University, argues as much in his book "Inherit the Holy Mountain," which traces the religious values -- mainly Presbyterian and Calvinist -- drawn upon by the environmental leaders of 1960s and '70s. (Catholicism, Stoll told Salon, has traditionally been more rooted in helping the poor; it's only more recently that leaders have begun to acknowledge the environmental and climate component of that mandate.) But in more recent years, Stoll said, the moralistic component of environmentalism voiced by people like Theodore Roosevelt, John Muir and Rachel Carson appears to have died down; the pope, through his righteous condemnation of greed, is both echoing and helping to restore our understanding of environmentalism as a moral issue.

Doing so in a religious voice, Stoll added, will only serve to bolster the pope's message in the American mind. "That's just the way that Americans respond to things," he said. "Just because you have a more secular society doesn't mean that these values vanish. They get transmitted from one generation to another. And so people will, in a way, I think respond to a message that's couched in a moral way."

Climate change isn't a religion -- that's an attack leveled by climate deniers by what is in fact a scientific consensus. But to be successful, the climate movement just might need religion. The simple facts of climate science are, after all, value neutral: You can acknowledge that global warming is real and that humans are causing it, and still argue against doing anything about it. A call to action requires a values system, be it couched in economics, or self-interest, or, as in this case, moral and ethical duty.

"Religion doesn’t inform policy, but informs humanity, writ large, and religious teachings inform the humanity, literally -- concern and ethics -- that individuals bring," was how Dodd put it. "So we don’t regulate carbon because the Torah or the pope says so, but individual citizens, consumers, activists, and even legislators, consider the encyclical, or the Talmud, when formulating their response to a global crisis of this magnitude."

That, I'd agree, is religion at its best.