Moderate Dems are reeling from their TPP defeat. Here's why it's a good sign that they're whining to the press 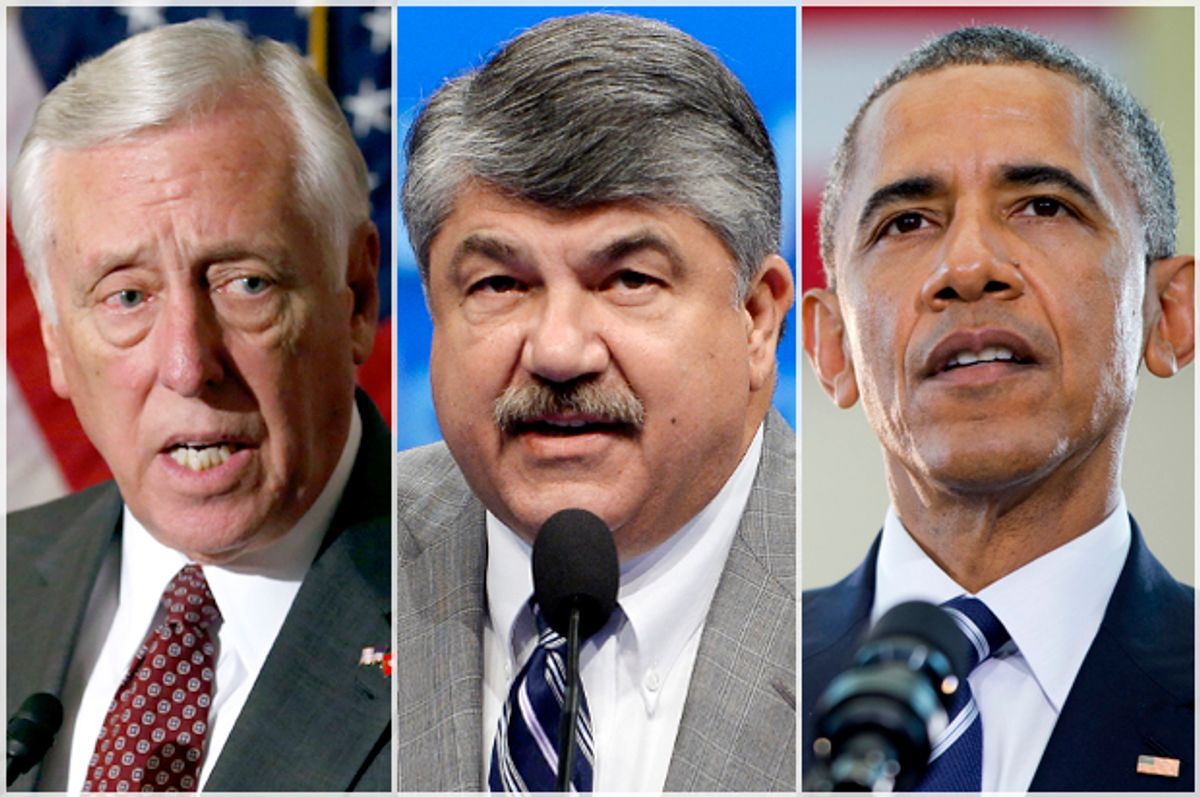 Two weeks ago, after a clear majority of House Democrats Gandalf’d a crucial vote involving the Trans-Pacific Partnership (TPP), no one was certain what the White House would do next. Press Secretary Josh Earnest did his best to spin the defeat as a victory, albeit one slightly marred by a “procedural snafu.” Those under no obligation to protect Obama’s image, however, felt differently. Vox’s Jonathan Allen reported that the president’s trade agenda was possibly already dead.

In the time since, the White House and its Republican allies in Congress have opted for a Plan B, which will require Obama to (arguably) break a promise and to muscle through the Senate a less-bipartisan version of a bill that had trouble passing already. Oh, and they’ll have to do this despite the fact that former Secretary of State Hillary Clinton looks like she’s going to follow the Democratic Party’s base and remake herself as a free-trade skeptic. All that aside, though, I’m sure it’ll be a cinch.

But while the ultimate fate of the TPP is still unclear, there’s one element of this ongoing fight within the Democratic Party that you should expect to see more of in the years to come. It’s not the rise of a more combative labor movement, though that’s certainly part of it. And it’s not the decline of the party’s neoliberal wing, though that’s happening, too. No, it’s something much less important, but much more amusing: the wails of outrage and self-pity from moderate Democrats who resent the party’s once docile, but now ascendant, liberal base.

True, as it became apparent that the House TPP vote was going to be closer than the moderates and the White House predicted, there were some murmurs of discontent. But it wasn’t until a Thursday report from Politico that we heard the pro-TPP crowd really using its outside voice. The article was analytically suspect — among other curiosities, Rep. Steny Hoyer, the decidedly moderate minority whip, seems to be presented as a liberal — but it was also well-reported. More importantly, it reflected the worldview, biases and delusions of corporate America’s friends in Washington, which is Politico’s stock-in-trade.

For example, despite the fact that, as Steven Greenhouse reported for the Guardian, the alliance against the TPP was basically comprised of the Democratic Party’s entire base, Politico focuses exclusively on organized labor. And once you read the rest of the article, you can see why: it’s the only framing pro-TPP Dems can use without sounding out of touch. Unions are easy to demonize as “special interests,” after all. If you’re talking about faith groups, civil liberties advocates, consumer protection organizations, liberal economists and more, on the other hand, it’s hard to use that talking point without sounding like a Republican.

But there’s another reason why Politico’s Democratic sources kept the focus on unions: because unions, for all their troubles, are still better than the rest of the liberal coalition at wielding their financial clout. And because the unions followed a strategy of threatening to withhold donations for — or even launch primary campaigns against — Democrats who voted for the TPP. Business-friendly Democrats know how conservative activists use a similar approach to keep squishy Republicans in line. They’ve seen it work; and they don’t like it.

“I didn’t like what I was reading and seeing in the public from the [union] presidents in terms of trying to single members out and pick on members,” Rep. Cedric Richmond complained to Politico. “I’m one of those guys that really protects my friends, and the Democrats are my friends and I didn’t like the fact that [labor was] doing that.” An anonymous advisor for Rep. Kathleen Rice sounded a similar note, telling Politico that labor has “declared war on one of the only Democrats who doesn’t need them,” which, in this source’s surely unbiased opinion, was “a political miscalculation of staggering proportion.”

The protest-too-much concern trolling didn’t end there. “I don’t think it’s helpful,” said Rep. Hoyer, who voted against the bill but, like Minority Leader Nancy Pelosi, is believed to be working behind the scenes to ensure its passage. “Both Leader Pelosi and I have urged members to have respect for one another’s positions,” he continued. “We’ve also urged our friends in labor to have respect.” For unions, of course, “respect,” means a willingness to spend money, time and energy on candidates who vote against their interests. The whole thing is “very emotional,” one anonymous House Democrat said.

That same Democrat also provided the quote that may best encapsulate the moderates’ point of view, and offers the best window for seeing why they’re so flummoxed. “I just think it’s amazing that you’re with [the unions] 85 percent of the time,” the source whined, “and yet they can be sincere about spending a lot of money against members.” On first look, this is a weird thing for a professional politician to say. Every voter, after all, has her lines in the sand. But when you place it in the context of the last 30-odd years of Democratic Party politics, it makes more sense.

“Business-friendly” Democrats, like many of those who stuck by Obama and voted for the bill, have spent most of their political lives in a world where unions had to settle for 85 percent. Even if that 15 percent was something like the TPP, which is more important than dozens of other votes put together, unions — and the rest of the liberal coalition, for that matter — knew they were on the defensive, and that it would be self-defeating to push back. But times are changing, and it’s no longer so clear that unions and liberals can’t do better. Neoliberal, corporate-friendly Democrats no longer get an automatic pass.

For the kind of Democrat who worries more about the “business community” than workers, this is all terrible news. They already spend so much of their time trying to squeeze donations out of wealthy and corporate donors, who are naturally more inclined to support Republicans, the last thing they need is to have to simultaneously appease those on their left. So they’ll kvetch to Politico and wring their hands about a “left-wing Tea Party.” But unions and liberals should ignore them — or, if they must respond, laugh.