Dear white allies after Charleston: Please understand this about your privilege

White America, it's time we talk. In the days after Charleston, here's the way we're talking about race in America 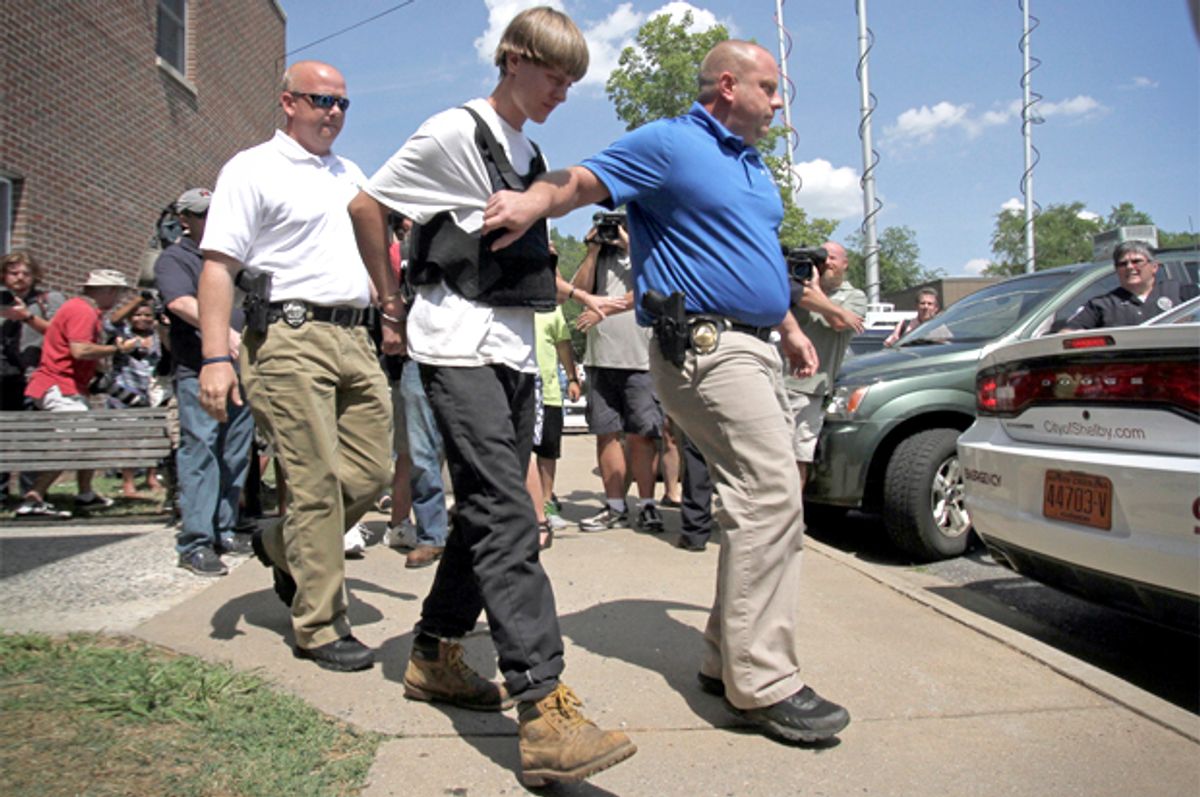 The Charleston shooting is a textbook example of White Privilege. Let’s start with the manner in which the cops apprehended Dylann Storm Roof, the murderer and domestic terrorist.

Note that at the time of his arrest, Roof was an armed and dangerous fugitive, who heartlessly gunned down nine church members -- and still received the utmost care when he was taken into police custody. The cops gave him a nice bulletproof vest to assure that he wouldn’t receive any damage on his way to the station and genteelly guided him out to the squad car. When the cameras flashed, he was clean and spotless, with every hair of his Lloyd from "Dumb and Dumber" cut in place.

If he were black, he probably would have ended up like the innocent, unarmed Cleveland couple, Timothy Russell and Malissa Williams, who fled in a similar manner as Roof, but received no love or restraint -- just 137 shots for being on the wrong side of privilege. And this is the norm; there’s a collection of contemporary cases that display similar results.

Walter Scott was black and unarmed. He died at the hands of law enforcement while Craig Stephen Hicks, a white male who shot three unarmed Muslims over a parking space in North Carolina, is alive and well.

Michael Brown was an unarmed black teenager who was on his way to college before he was murdered by a white police officer. Dzhokhar Tsarnaev, the white guy who bombed runners in the Boston Marathon, is alive and received his day in court.

James Holmes, another white domestic terrorist, shot up a movie theater during a Batman movie; Tamir Rice, a 12-year-old kid. was murdered for having a toy gun.

Freddie Gray, black and innocent with a pocket knife equals dead. White killers like Roof get award-winning restraint. The list goes on and on: White privilege allows you to survive and being black could get you killed.

You’ll probably go to a better school, never be profiled by police officers, get lower interest rates, and always have the luxury of walking around convenience stores in peace. It is that way, it has been that way, and chances are it will remain that way.

Karl Alexander of Johns Hopkins University recently completed 35 years of research dealing with the poor white experience vs. the poor black experience. He published his findings in his book "The Long Shadow," where he wrote that whites use more drugs, but are less likely to be charged -- and in Baltimore, where 97 percent of the black people who are born in poverty die in poverty, it’s easier for a white person with some jail time to get a job over a black person with some college.

Sometimes it’s hard to get white people to wrap their heads around the idea of privilege. I have white acquaintances who struggle with the idea of white privilege, so I take my time and try to explain it in the most non-divisive way possible. I start off by saying, “It’s not your fault. You did not ask for this privilege but you need to acknowledge that it exists so that we can all move forward.” Then I talk about some of those simple things that come with privilege before putting it into a simple historical context.

We can even venture past the way that Africans entered America because that’s too obvious, skip right by the hundreds of years of chattel slavery, and dive into those post-Civil War years where race began to trump ethnic identity.

“Racial identity becomes the paramount spatial mediation of modernity within the newly reunited nation. Race nevertheless became the crucial means of ordering the newly enlarged meaning of America. This happened because former Confederates, a growing class, embattled farmers, western settlers, a defensive northeastern elite, woman’s rights advocates, and the scientific community simultaneously but for different reasons found race useful in creating new collective identities to replace older groundings of self. As important these mass racial meanings were made and marked at a time when technological change made the cheap production of visual imagery possible and the development of a mass market provided finical incentive, selling through advertising, to circulate the imagery."

Hale then noted that this new way of advertising was responsible for cheaply exposing products to the masses and to paint the new picture of America and what it should look like. Affluent whites masterfully executed their plan by enforcing Jim Crow, practicing white vs. colored, and by portraying blacks in the media as slaves, servants and clowns over and over again until it became tradition.

The explosion of mass media made these divisive images a permanent fixture, furthering the divide and strengthening the idea of whiteness and coupling with it a sense of pride and entitlement. The kind of the entitlement that will give a person like Rachel Dolezal the confidence to claim black when convenient, as she parades around in blackface, starting a media frenzy that deflects attention away from real black issues.

Playing black will probably get her a huge book deal and a fat check for a crappy Lifetime movie. That’s another way privilege works. Burying my face in Caucasian-flavored foundation, copping a blond wig and publicly speaking out about the issues that affect poor whites would not get me a string of TV interviews or any money-making opportunities. I’d be branded as crazy and sent to a mental institution.

If "transracial" Rachel or any white person really wants to help combat the many disparities caused by privilege, they can start by acknowledging the problem, understanding the gifts that privilege afforded them in this country, and making their white friends aware. There are millions of white people African-Americans don’t have access to and we need white allies who get it to make those connections with whites who fail to comprehend.

They could also challenge the legal system and call bullshit on "affluenza" for the rich and the collection of killer cops who get away with murdering black people. Once that foundation is laid, we can move on to talking about what comes next.