The St. Louis Post-Dispatch splashed the woman's "past affair" and night of drinking on the front page 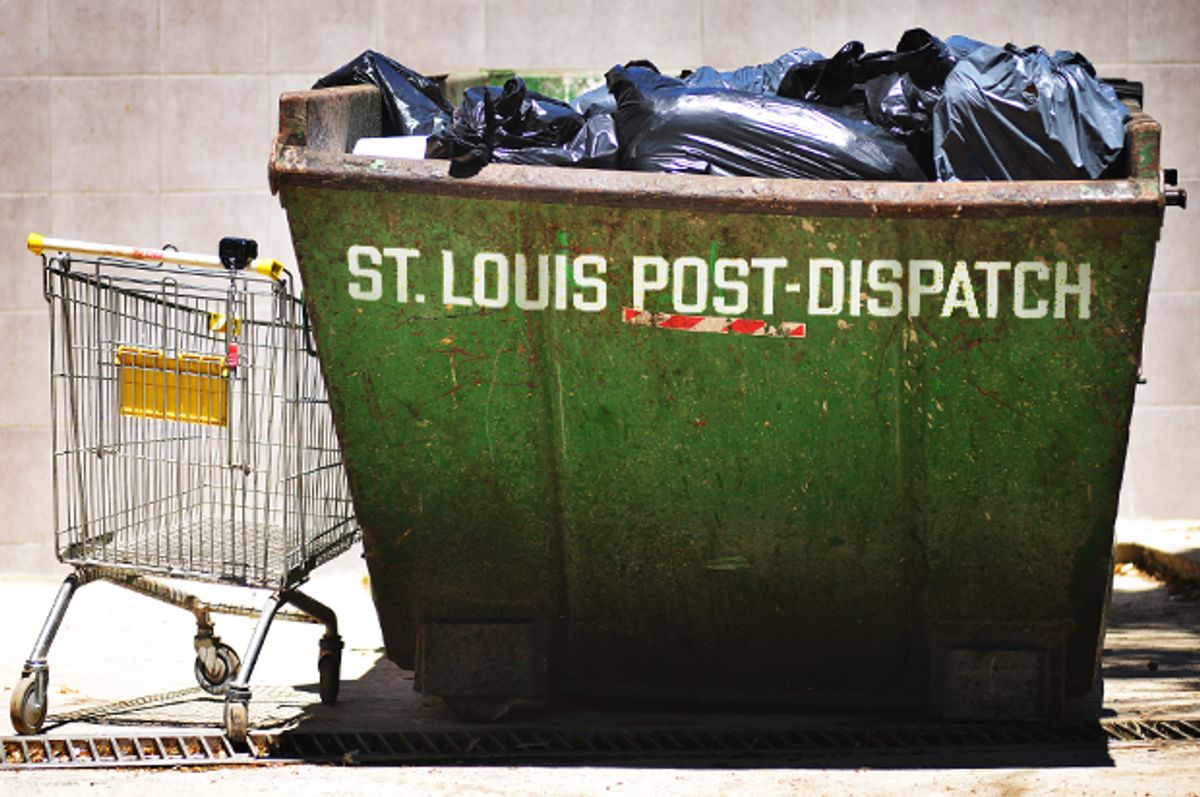 This may or may not be a story about a sexual assault. It is, however, about a question around it. Ever wonder why it's estimated that nearly 70 percent of sexual assault victims don't report what happened to them? If you do, it's your lucky day, because this is an exemplary tale of what happens when a person comes forward to ask for help — especially a person who doesn't fit into the tidy narrative of the knife-wielding stranger and the morally spotless female.

In a blisteringly eye-opening Monday feature in the Riverfront Times, writer Sarah Fenske delves into a recent St. Louis Dispatch story involving a 31-year-old woman who asked police to investigate her concerns that she'd been sexually assaulted during what she believed was a drinking blackout. As the Dispatch story reports, "She told [police] that when she woke up, she discovered that her wrist hurt, her clothes were muddy and had blood on them and she couldn’t remember most of the evening. When police asked if she thought she had been sexually assaulted, she said: 'Maybe.'" A rape kit collected "suspected semen." This, however, is not the main point of the story. Nope, instead, it's that, as the main headline revealed, "Police report reveals past Diehl affair with Nixon staffer." Even more explicitly, as the story's headline inside the paper put it, "Police report details woman's night of partying."

The Post-Dispatch article features a photograph of the woman and gives her name and job history, as well as a revelation that she shared with police: that she'd had an affair with the Missouri House speaker John Diehl, who recently stepped down after exchanging sexually charged texts with a 19-year-old student intern. So as far the story's concerned, "the detailed police report — which is sprinkled with names of prominent politicos whom [the woman] saw or texted with that night — opens a window into the capital's nightlife" — one in which the Jagerbombs on her bar tab and details like "as she left, she stopped to take her shoes off and a businessman named Paul Findlay, who had met her at the bar, offered her a piggyback ride. She jumped on his back, which caused them both to fall on the concrete" are up for public discussion. The case has now been closed due to "lack of victim cooperation." The woman refused to speak to the paper for the story, saying only, "It’s a very personal, humiliating and embarrassing thing I went through."

It would appear that the woman — whose name it should be abundantly clear I'm not interested in dragging through the mud — has let go of pursuing investigation into whether she was assaulted on the night in question. That doesn't give anyone else a free pass to not so subtly judge her for her private behavior — especially her previous sexual behavior. Fenske puts it astutely: "If you call the police because you think you may have been raped in a blackout, the next thing you know, all the details of what you drank and who you've been sleeping with end up on A-1 of the state's largest daily." It's kind of like how, earlier this year, a New Orleans woman made the papers for reportedly being raped by two men "after a night of drinking." And as Fenske also importantly observes, both police and the Dispatch assume that the woman couldn't have been texting at one point in the evening because she was in a blackout, wildly mistaking a drinking blackout for being unconscious. And she adds, "The cops apparently traced her steps up to a point -- a point when it was clear she'd drank enough to be seriously wasted -- only for the woman to stop cooperating with the investigation. At that time, the police had yet to test the evidence they'd collected in the rape kit."

So because a woman had an affair with a now disgraced politician and then got very drunk, she's been on the front page of a major newspaper and had personal life has been called into question. Does it make you wonder about how many other women wake up with questions and fears about what happened the night before, and decide it's not risking their professional lives to find out? Because it should. Fenske says, "You could call this story slut-shaming. You could call it prurience. Just don't call it good journalism."