The racist insanity of "Meet the Press": How can Chuck Todd be so oblivious? 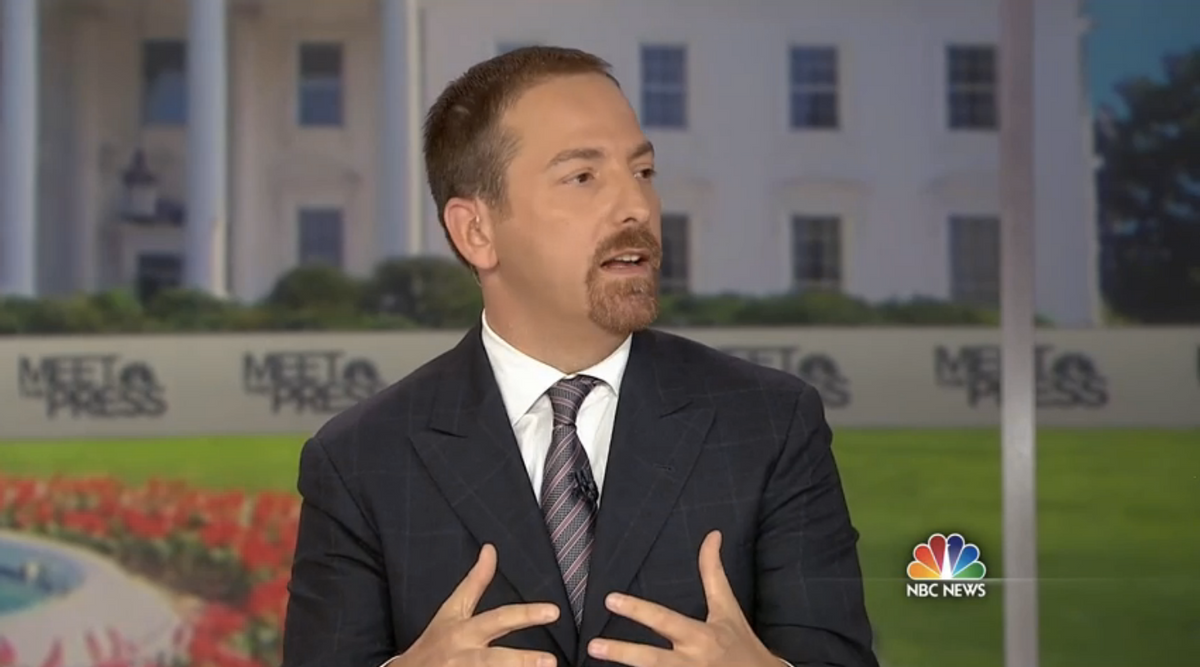 Here is a thing that actually happened this weekend: On a day when one of the oldest black churches in America was holding its first Sunday services after nine of its members were shot dead by a white supremacist, when the issue of white racism in its most virulent form was front and center, when black people everywhere were expressing their anguish and their rage over one of the worst racist attacks in decades, when all of that was taking place, one of the most prominent current affairs shows in the country still chose to respond this way: It aired a video featuring exclusively black men talking about their history of gun violence, and its host told his viewers that he wanted them to look at the whole thing as a "colorblind issue."

That's what "Meet The Press" host Chuck Todd did on Sunday, in one of the most tone-deaf responses to Dylann Roof's murderous spree that you are likely to see. The video would have been questionable on any day—telling people to watch a video only focused on black men through a "colorblind" lens is almost too absurd to be real—but in the wake of the Charleston attack, its awfulness reached peaks of operatic intensity.

Roof, who expressed concern in his veritable Klan audition of a manifesto that black people get too much sympathy in the national conversation, might have been pleased to know that one of the bastions of America's elite media was willingly serving up portraits of black criminality on a day such as Sunday. Such is the enduring power of whiteness in our culture and in our media.

Let's take a step back and contextualize this for a moment. The "MTP" debacle came after days of agitation on social media and elsewhere about the political and media double standards that always seem to surface after white people commit horrible crimes. Everything that regular followers of such stories look for—from the reluctance to use the word "terrorism," a term tossed around with the utmost casualness for Muslims, to the scrambling around for any motive behind Dylann Roof's rampage other than the obvious and correct one, to the framing of the killings as those of a lone wolf from a broken home—emerged almost immediately. By Sunday, though, it was crystal-clear what had happened. A white supremacist had gone into the Mother Emanuel church with the goal of killing black people, and he'd done so using a gun.

The fact that his panel looked essentially as it might have on any other week—though it did fulfill my longstanding maxim that it takes black people being killed to get more than one of them on a Sunday show roundtable—should tell you something. If Charleston isn't enough for "Meet The Press" to bump David Brooks, what in God's name is?

After speaking to the family of one of Roof's victims, and talking to congressman Jim Clyburn and his panel about the Confederate flag, Todd turned to the aforementioned video. The thing was so egregious that Robinson raised a modest objection, which is the equivalent of an enraged tirade in "Meet The Press"-land.

"It wasn't a terribly diverse set of people who were talking," he noted. "Right now, we're talking about a horrific crime committed by a white man...this is not just an African American problem."

"And it wasn't intended to be that way," Todd, who had just shown a video portraying gun violence as exclusively an African American problem, replied. He then informed his audience that the New York Police Department had loved the video, which should tell you all you need to know.

But Chuck Todd also checks Twitter out occasionally, so he saw that people were flabbergasted about what he'd done, and he addressed it when the show came back. "It wasn't meant to be a black and white issue, and I understand [we're] maybe in one of these moments where everybody's only seeing things through black and white," he said, as if his audience needed to get on the same enlightened plane as him to see why there wasn't a problem with the video.

Todd then wrote a longer response to the kerfuffle, which, if anything, was even worse. An excerpt:

The original decision to air this segment was made before Wednesday's massacre. However, the staff and I had an internal debate about whether to show it at all this week. When we discussed putting it off, that conversation centered around race and perception - not the conversation we wanted the segment to invoke.

We decided against delaying the segment because we wanted to show multiple sides of what gun violence does in this country. We thought the issue of gun violence in our culture and society was an important conversation to continue -- too important to put off for another week. The consequences of gun violence should not be hidden.

As I say to all audiences, "Meet the Press" should make all viewers uncomfortable at some point or we are not doing our job. I hope folks view the gun video as a part of the conversation we should all be having and not the totality of it.

Really, though, we had no right to expect better from a show that represents one of the most entrenched bastions of whiteness in the media world today. If you're looking for a symbol of why that world is in desperate, immediate need of a diversity shakeup, you would be hard-pressed to find one better than Sunday's "Meet the Press," because when you have more kinds of people around the table, you're more likely to avoid monumentally stupid screw-ups like the one Chuck Todd just made.