7 reasons you should throw your chicken dinner in the garbage 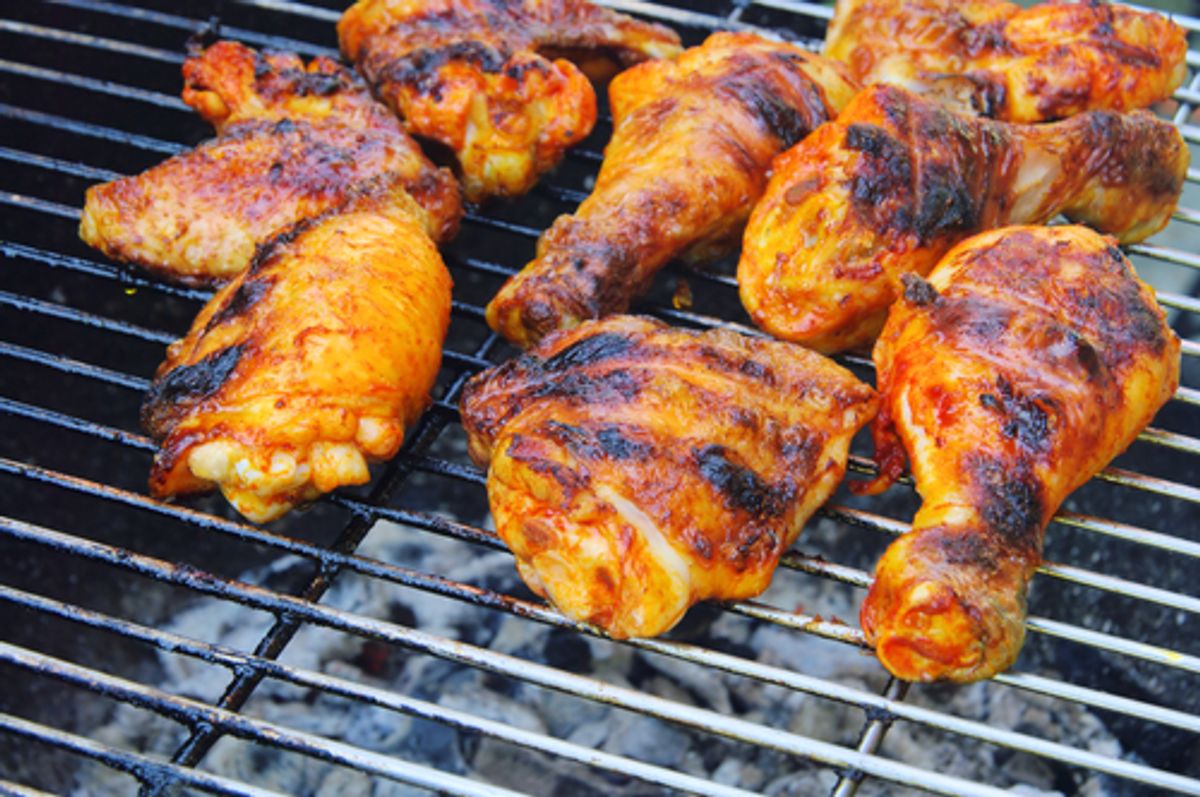 Could there be anything worse for the chicken industry than this month's outbreak of an antibiotic-resistant strain of salmonella that hospitalized 42 percent of everyone who got it—almost 300 in 18 states?

Yes. The government also announced that China has been cleared to process chickens for the US dinner plate and that all but one of arsenic compounds no one even knew they were eating have been removed from US poultry production. Thanks for that. Also this month, some food researchers have revealed the true recipe for chicken "nuggets"…just in time for Halloween.

Many people have decided to eat only chicken to avoid the health, environmental, worker and humane questions surrounding red meat. Yet the track record of US chicken in these areas is no better than red meat—and may be worse.

Here are some things you should really know about your chicken.

Do you remember the joke "denial is not a river in Egypt"? Well "Heidelberg" is not a charismatic city in Germany when you're talking about food. It is a monster version of salmonella, some strains of which are resistant to seven antibiotics, says Christopher Braden, director of the Centers for Disease Control and Prevention division of foodborne diseases.

Thirteen percent of people affected by the current outbreak have salmonella septicemia, a serious, life-threatening, whole-body inflammation, says Braden. The contamination stems from "fecal material on carcasses, poor sanitary dressing practices, insanitary food contact surfaces, insanitary nonfood contact surfaces, and direct product contamination," says the USDA. That about covers it. The California-based Foster Farms, believed to be the source of the outbreak, has had salmonella problems for a decade says Food Poisoning News. Nor has the government shut them down, even now.

Salmonella is a "naturally occurring bacteria," says the USDA and hence allowed in food—but we are supposed to cook chicken and other products to at least 165°F to kill it and other microbial freeloaders. But Caroline Smith DeWaal of the Center for Science in the Public Interest disagrees with the government's leniency. Salmonella strains like Heidelberg “are too hot for consumers to handle in their kitchens,” she told USA Today.

Just because chicken has salmonella doesn't mean it doesn't also have E. coli! Eighty-seven percent of chicken carcasses test positive for E. coli before they are sent to stores, reports Salon. E. coli is considered more dangerous than salmonella by the USDA and was one of the reasons Russia banned 19 US poultry producers in 2008 (along with US arsenic residues). Antibiotic-resistant E. coli traces were found in samples of raw conventional chicken, chickens "raised without antibiotics" and kosher chicken purchased in New York City in April.

The highest E. coli incidence was, surprisingly, found in the kosher chicken. Last year, researchers writing in Emerging Infectious Diseasesreported that E. coli in chicken is genetically closer to human E. coli than E. coli in beef and pork samples and could put people at risk for urinary tract infections when they are exposed to it because of its similarity.

"What Was Arsenic Doing in Our Chicken, Anyway?" asked a Bloomberg article after the FDA reported the end of all but one poultry arsenic product this month, four years after the Center for Food Safety filed a petition. The agency announced that the Center's petition to have the approvals of arsenic-containing poultry feed revoked had become "moot" after the "sponsors of those drugs requested that FDA withdraw the approvals for those products." One of the four compounds, nitarsone, is still on the market while the FDA reviews its safety.

Why are birds fed arsenic? It has been approved in poultry feed for years to control parasites, promote weight gain and improve feed efficiency and "pigmentation." A 2013 study in the journal Environmental Health Perspectivesfound detectable levels of arsenic in chicken from grocery stores in 10 American cities, including organic chickens.

Nor is arsenic the only unwanted chemical guest. Looking at feathers of factory farmed birds, researchers have also found evidence of caffeine and the active ingredients in Tylenol, Benadryl and Prozac reports the New York Times'Nicholas Kristof. The caffeine is supposed to keep chickens awake so they eat more, while Benadryl, Tylenol and Prozac are supposed to reduce their anxiety so their meat doesn't get tough, says Kristof.

Where do antibiotic-resistant salmonella and E. coli in chicken come from? Is that a trick question? More than 70 percent of US antibiotics go to livestock—more than 29 million pounds of antibiotics a year—which of course creates antibiotic resistance. The antibiotic-resistant pathogens aren't just a risk to food, they're a risk to farm workers. Ellen Silbergeld, professor of environmental health sciences at Johns Hopkins' Bloomberg School of Public Health, found 63 percent of the chicken workers at one plant had been colonized by Campylobacter jejuni, a germ that is the second leading cause of gastrointestinal disease in the US. One hundred percent of people living near the plant but not working there who were tested had Campylobacter jejuni too.

In 2008, the USDA caught chicken giant Tyson Foods claiming "no antibiotics" in its ads and labels while brazenly using the human antibiotic gentamicin as "standard practice" in its chickens. Tyson has been charged with other scourges affecting Big Chicken, such as cruelty to animals, paying smugglers to transport illegal workers, and violating the Clean Water Act. Tyson was also investigated for bribing veterinarians in Mexico, but never charged.

No one has ever thought chicken nuggets were actually good for you. Last year, the Daily Mail reported a girl who lived on only McDonald's Chicken McNuggets collapsed and was diagnosed with anemia and inflamed veins on her tongue. Now, some researchers writing in the American Journal of Medicine have revealed new facts about the mystery meat. Some nuggets that were examined were a mix of fat, blood vessels and nervesincluding cells that line the skin and internal organs. Other nuggets were mostly fat, cartilage and bone with only 40 percent muscle meat.

A few years ago, CNN revealed that Chicken McNuggets in the US contain an anti-foaming agent called dimethylpolysiloxane found in Silly Putty and the petroleum-based preservative tBHQ also called tertiary butylhydroquinone. After the American Journal of Medicine article, Mother Jones' Tom Philpott asked Tyson about the wholesomeness of its Fun Nuggets. Tyson referred him to the National Chicken Council, which said, "Chicken nuggets are an excellent source of protein, especially for kids who might be picky eaters."

Put the words "food" and "China" together and many people think of the 1,950 cats and 2,200 dogs who perished from China-produced pet food a few years ago and the Asian melamine milk scandals that plague Asian countries. Still the takeover of Smithfield Foods by Shuanghui, the biggest takeover of a US company, shows our food future is being shaped by China—and chicken is no exception.

Many missed the announcement that the Obama administration has approved chicken processed in China to be sold in the US without a country-of-origin label. The chickens will be raised and slaughtered in USDA-approved US or Canada operations, but sent to China for processing (which is called "labor-intensive") and sent back to the US. The savings in farming out the labor is apparently greater than the cost of shipping the chickens both to and from China—though no one is talking about the carbon footprint. Nor is anyone talking about how the chickens will be preserved during their overseas voyages and how old they will be when they finally get to the dinner table.

No USDA officials will be onsite at the Chinese chicken processing plants which will, instead, "self-verify" their quality as plants are increasingly doing here. The National Chicken Council says the processed chicken will have "increased inspection upon entry into the United States” and that substandard exporters will be disqualified. Whew.

Chemicals, cost cutting and outsourcing labor take a toll on the birds whose lives and deaths are increasingly inhumane. Chickens were once slaughtered at 14 weeks when they weighed about two pounds but by 2001, they were being slaughtered at seven weeks when they weighed between four and six pounds Today they are even bigger and their lives shorter. In fact, chickens are now grown so quickly, if humans grew as fast, we’d weigh 349 pounds by our second birthday. As a result, chickens have constant bone disease, live in chronic pain and perish from eerie, factory-farm related diseases.

"Good birds on their sides or breasts, scattered in a random fashion in the pen also usually are considered to be dead from flip-over," says Poultry News. "Diagnosis is supported by the full GI tract (particularly the full intestine); the large, pale liver; the large, normal bursa; the contracted ventricles and dilated, blood-filled atria; the lung congestion and edema; and the lack of pathological lesions."

Assembly lines move so fast in today's chicken slaughterhouses, poultry workers, the government and even the chicken industry admit that the birds break their own bones in struggling to escape the uncaring death that the pursuit of cheap meat forces on them.