Chicken is killing the planet

Processed chicken is already bad for the environment, workers and consumers -- and it's about to get a lot worse 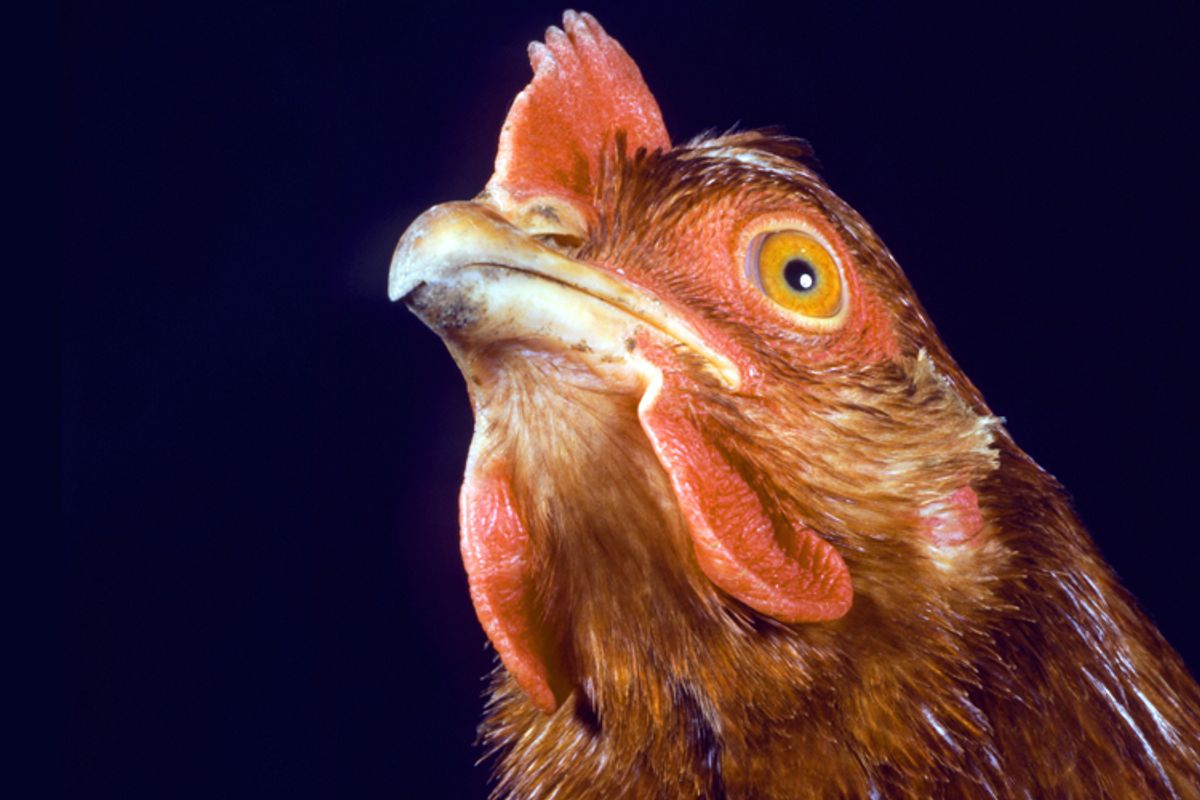 Earlier this month, while you were busy sneaking out of your empty office, hoping nobody would notice your starting the holiday weekend early, the USDA was also doing something it was hoping nobody would notice. It was green-lighting the sale of Chinese processed American chicken.  As Politico explained, “U.S. officials have given the thumbs-up to four Chinese poultry plants, paving the way for the country to send processed chicken to American markets.” But while, “at first, China will only be able to process chicken that has been slaughtered in the U.S. or other certified countries,” that should not be a comfort to fans of the McNugget, Campbell’s chicken soup, or any other processed chicken product.

To start, that a chicken was born and bred on U.S. soil is no guarantee of its quality. It is, however, a good indicator of several other things, starting with the bird’s short, miserable life. The vast majority of the almost 300 million egg-laying hens raised in the U.S. every year are kept in cages too small for them to spread their wings, and this practice is beginning to take hold in raising our 8 billion broilers (the ones we eat) as well. The broilers are fed a diet laden with arsenic and antibiotics, while egg-laying hens are often packed into barns so full of birds, feathers and feces, that, as we learned last month, an employee could literally get shot in one without anyone even noticing.

Don’t be comforted by the fact that chicken was processed in the U.S. either.  Between slaughter and nugget-ization, chicken carcasses endure a host of perversions, making chicken less of a food and more of a food-like substance. They are injected with saltwater solutions to add weight and taste. Their bodies are mechanically separated through a processed called “Advanced Meat Recovery,” stripping the meat off leftover bones and turning it into the poultry version of pink slime.  The resulting goop will be cooked into something tasty and sold to you, the unwitting customer. And yes, this process does actually impact the food on your plate: According to a 2009 USDA study, 87 percent of chicken cadavers test positive for E. coli, feces’ favorite bacteria, just before they are packaged and sent to a store near you.

But Big Chicken doesn’t just exploit the animals – the environment and its employees suffer as well.  According to a 2011 Pew study, modern-day chicken farming pollutes the water, the air and the soil. Chicken manure finds its way into everything nearby, oversaturating the land and water with phosphorous and nitrogen, depleting them of oxygen and killing aquatic life.  Industry tycoons Tyson Foods and Perdue Farms have both been accused of outsourcing their labor, turning “what were once good-paying positions” into “near-poverty-level jobs.”  Perdue defended its practices to Salon, noting that it “was among the last of the poultry companies” to outsource, and that “affected associates were able to apply for positions elsewhere” within the company.  Tyson offered a similar response, adding that outsourcing certain positions is “common practice in the poultry industry.”

It’s worth remembering that these jobs still leave a lot to be desired.  A recent study by the Southern Poverty Law Center concluded that the industry regularly sacrifices its workers’ health and safety in the name of increased factory floor “efficiency.”  According to the SPLC, “the U.S. Occupational Safety and Health Administration reported an injury rate of 5.9 percent for poultry processing workers in 2010, a rate that is more than 50 percent higher than the 3.8 percent injury rate for all U.S. Workers.”  The U.S. Poultry & Egg Association and National Chicken Council answered the SPLC’s study with its own five-page report, noting that overall, injuries and illnesses have dropped 74 percent over the past 20 years, and concluding, “While the past 25 years has seen a dramatic decrease in the numbers and rates [of] injury and illnesses occurring in the industry, the poultry industry will continue to seek new and innovative ways to protect our workforce.”

But despite all of the problems with our chicken system, the momentum is moving against regulation instead of toward more of it.  As Tom Philpott reported for Mother Jones, the Obama administration wants to simultaneously speed up slaughter lines and cut three-quarters of their inspectors. While the USDA currently requires four inspectors at any line killing up to 140 birds per minute, it has proposed cutting three of those inspectors while upping the chickens killed per minute limit to 175.  This announcement came on the heels of another major shift in American poultry policy: Not only will we allow the shipment of chicken cadavers to China for processing, but the USDA has now OK'd the import of the resulting chicken products back home.

This change in the chicken market will almost certainly exacerbate that market's problems, not solve them.  Meat is already the No. 1 contributor to climate change.  Don’t expect shipping slaughtered chickens 7,000 miles to China and then bringing them back as processed food to lower that carbon footprint.  And, of course, the Chinese poultry industry has its own dirty laundry, including a current bird flu outbreak, believed to have “evolved from migratory birds via waterfowl to poultry and into people,” and already responsible for 44 deaths; the sale of 46-year-old chicken feet; and exporting tainted dog treats, sickening nearly a thousand American pets.

Even if the Chinese facilities were subject to U.S. poultry farm inspection processes, consumers still could not be guaranteed the products’ safety. But the Chinese factories turning American-raised chickens into American-sold chicken nuggets won’t even have that.  According to the New York Times, no USDA officials will be on site – the processors will simply self-verify the source of the poultry being processed. “And because the poultry will be processed,” the Times continues, “it will not require country-of-origin labeling.”  While Tom Super of the National Chicken Council assured me that Chinese products will be “subject to increased inspection upon entry into the United States” and a failure to meet U.S. safety standards will result in a revocation of China’s eligibility to export to the U.S., it is unclear how, without on-site inspectors, the chicken industry will reduce the risk of, for example, cross-contamination with China’s own poultry supply.  (Not all of Big Chicken is jumping on the China bandwagon – Perdue has “no plans” to move its processing off USDA-inspected facilities.)

The Centers for Disease Control and Prevention estimates that food-borne illnesses sicken approximately 48 million people each year, and the Center for Science in the Public Interest puts chicken in the No. 1 spot of its “Risky Meat” list.  While Super notes that 99 percent of the chicken consumed in the U.S. is “hatched, raised and processed” here, and “we don’t expect that to change,” cutting the number of inspectors overseeing the process at home and excluding them entirely from new plants in a country already rife with controversial food safety measures seems unlikely to improve those numbers.  Super also mentioned that, “some economists have pointed out that they just don’t see how China can do this economically,” considering the logistics. Makes you wonder what corners will be cut to make it worth the effort.

Cue the scary suspense music every time you buy a processed chicken product at the grocery.

Correction: An earlier version of this story incorrectly described the process of washing mechanically separated chicken. The National Chicken Council says ammonia is not used in this process.