After Charleston, Walmart dumps the Confederate flag: Can they stop selling guns next?

Retailers finally turn their backs on the symbol, but it feels like too little, too late 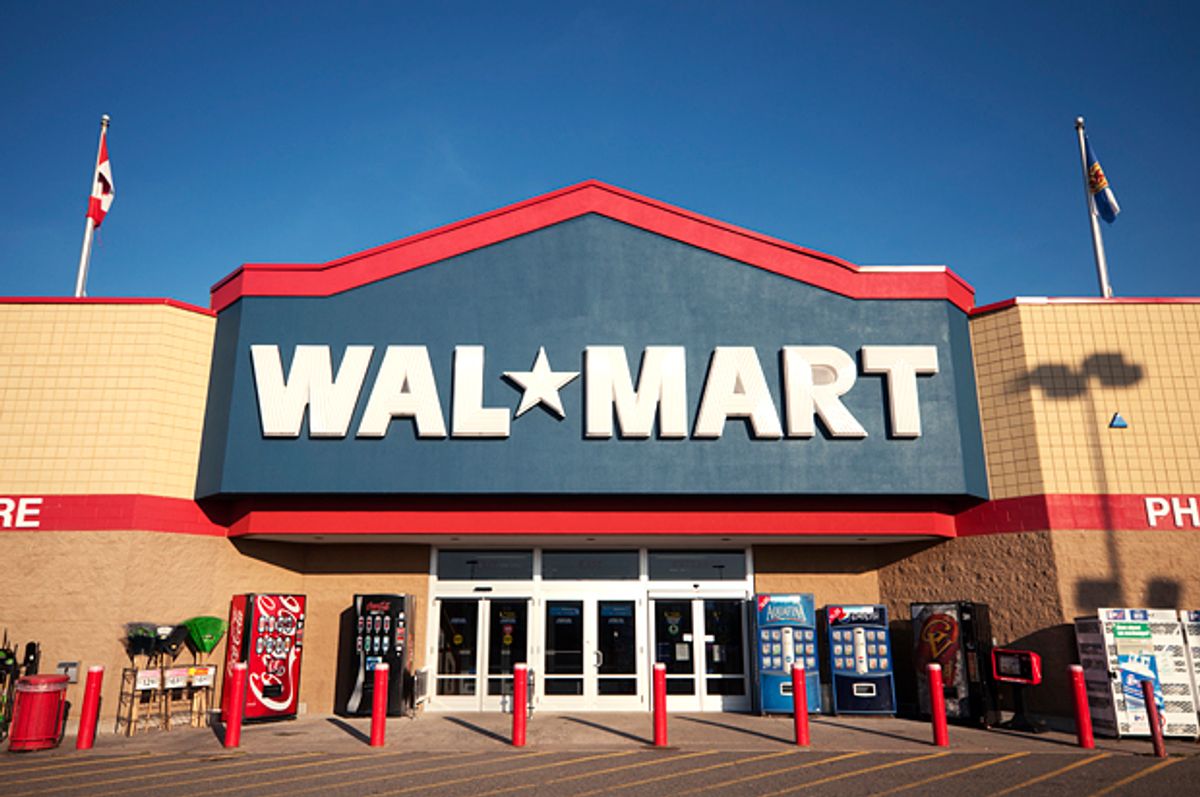 Oh, Walmart, you shouldn't have. You too, Sears. I don't mean to sound ungrateful here. That the two retail behemoths have decided to stop selling Confederate flag merchandise is a hopeful act of progress. There's just something about the fact that it only took a massacre to finally address the issue that makes it a little hard right now to let the congratulations and kudos flow freely. And the whole "still selling guns" thing feels a tad like missing the big picture.

On Monday, Walmart, the country’s largest retailer, issued a statement via spokesman Brian Nick that "We never want to offend anyone with the products that we offer. We have taken steps to remove all items promoting the Confederate flag from our assortment -- whether in our stores or on our web site. We have a process in place to help lead us to the right decisions when it comes to the merchandise we sell. Still, at times, items make their way into our assortment improperly -- this is one of those instances." Funny, they sure didn't seem to mind offending people who have a problem with the flag a week ago.

And Sears Holdings Corporation, which owns both Sears and Kmart, has likewise said it will no longer offer Confederate merchandise via third party vendors. Spokesman Chris Brathwaite says the items are already not for sale in their stores. The Monday announcements came the same day that South Carolina's Republican Governor Nikki Haley called for the flag to be removed from the State House, calling it a "deeply offensive symbol of a brutally offensive past" even while acknowledging that many still see it as "a way to honor ancestors." Thanks, I guess.

It's horrifying that this entire conversation had to be spurred directly as a result of the recent tragedy in Charleston, and the images of Dylann Roof holding a Confederate flag. It's insane that we're just now getting around to looking at our nation's long history of justification for clinging to symbols of slavery and oppression. On a related note, maybe now feels like a good moment to get rid of that bust of a Ku Klux Klan grand wizard in the Tennessee capitol building while we're at it. I'm glad that both official government agencies and major chain stores are taking a hard look at their wares and the message those items send. And sure, lots of people drive around with Confederate frames around their license plates and don't commit hate crimes. That said, it'd sure be nice if the retailers weren't quite so wishy washy about removing a symbol that is hateful, offensive and in certain instances legitimately menacing. It'd also be nice if Walmart stopped selling murder weapons at a discount?

In March, Charles Tan was charged with killing his father, Liang "Jim" Tan, with a shotgun purchased at a Walmart Supercenter. And last year, police shot and killed an Ohio man inside a Walmart when he was spotted strolling the aisles carrying a BB gun -- that was sold in the store. Maybe guns shouldn't be an impulse buy (even with the background check paperwork), alongside the many random household items you can pick up in a Supercenter. And let's not forget this is the company that a few years ago wouldn't carry a Green Day album because it had a parental advisory warning. Rifles? Cool. An album with a song called "21 Guns"? No way. Sorry, I'm having a hard time reconciling this here.

Writing in the New Yorker this week, Adam Gopnik notes that "The reason that we have gun massacres in numbers wildly out of proportion to any other rich country is because we have too many guns." Seems pretty obvious, don't you think? And while incremental progress is being made to confront and change the culture that lets hatred and violence thrive so well, we are a long, long, long way from really dealing with it in a meaningful way. Dropping the Confederate flag is a start. It's also just a drop in the bucket.