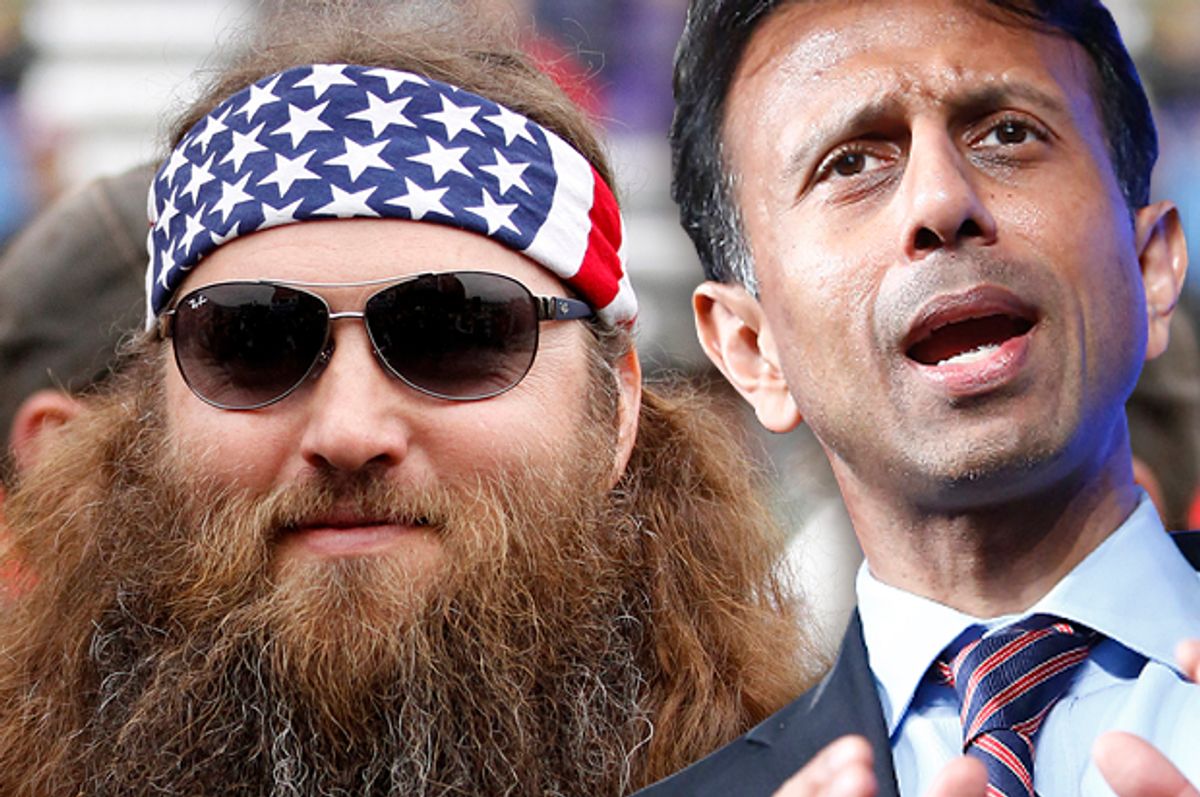 It is well past the prime of “Duck Dynasty.” The eighth season of “Duck Dynasty,” debuting Wednesday night, may well be the show’s last. The docu-series about a family of bearded self-styled rednecks who run a duck hunting supply operation in West Monroe, Louisiana was an unexpected hit for A+E, the network behind other modest fixtures like “Pawn Stars,” “Storage Wars,” and scripted series “Bates Motel.” But in the last few years, ratings have dropped significantly—a combination of “Duck Dynasty” fatigue and the natural life of a show, as well as patriarch Phil Robertson’s declaration of homophobia in an interview with GQ, back in January 2014.

Regardless of why, exactly, “Duck Dynasty”’s sheen has dulled with its audience, the show has become a stand-in for a way of life, a way of thinking, a way of seeing the world. With pride, or political expediency, from some—Republican governors Sarah Palin and Bobby Jindal have publicly endorsed the show, and Jindal, who is the Robertsons’ governor, cameoed on the show in 2014. With revulsion, from others: multiple critics have observed that Phil Robertson’s views on segregation, marriage, and religious tolerance are just as retrograde as his views on homosexuality. The show’s audience, and its one-time ratings dominance on A+E, was as much about morbid fascination as it was about identification. And though the show is ostensibly about the Robertson clan, it’s really about the men of the family—characters who willingly become caricatures, caricatures who are far too ridiculous to be real.

For example: In last season’s premiere of “Duck Dynasty,” “Glory Is The Reward Of The Mallard,” the Robertson men go to Scotland, where they mix their fatigues with kilts, paint their faces in blue woad, and wield swords along with guns, in an homage to Mel Gibson in “Braveheart.” In a few scenes, the family posts up in an opulent Scottish parlor, in their full redneck/Scot regalia. The scene makes them look like invading bandits that have stumbled into a room full of treasure; they’re disheveled hoodlums in the lap of luxury. Both on the “battlefield” and in the mansion, they’re a law unto themselves, occupying a space somewhere between pathological idiosyncracy and studied idiocy.

That’s both the appeal of “Duck Dynasty” and what is ultimately so maddening about it; if the show were scripted, it would be parody. The self-aware Robertsons are more than pleased to play up their role as redneck champions for the camera, in a coordinated dance that an improv troupe would recognize. (In that selfsame Scotland episode, Uncle Si quite earnestly sits at the edge of the Loch Ness with a fishing pole, hoping to catch “Nessie.”) At the same time, they exist in a curiously consequence-free environment, one where an exaggerated (if not outright contrived) lifestyle doesn’t just embody some of the worst self-deceptions of conservative politics, but in many ways, shapes the politicking of the conservatives around them. It’s not so much that Palin and Jindal came to the Robertsons’ defense, but that Palin and Jindal needed the support of their Robertson-loving base.

And perhaps, in a more perfect world, that wouldn’t matter. But in Louisiana in particular, the “Duck Dynasty” mythos is uncomfortably, awkwardly rapacious; what is an amusing artifact of the South to most of the country is an illustration of how badly Louisiana has botched its future. The Gulf coast as a whole ain’t no picnic, but Louisiana, headed by Jindal, has devolved into an unmitigated disaster. In February, the New York Times reported that Louisiana was heading into a $1.6 billion budget shortfall, largely because Jindal refuses to have a tax increase on his record as he looks to running for president in 2016. Earlier this month, his administration pushed a “student fee/tax credit ‘offset,’” which is something that Jindal invented to raise revenue for the state while claiming he never raised taxes. The governor has targeted higher education and health care, in particular, which specifically benefit populations at risk; this, on top of an income tax structure that forces the poorest 40 percent of Louisianans to pay the highest percentage of their earnings in taxes. And while Jindal calls climate change a “Trojan horse” and rolls back environmental protections for oil and gas companies, Louisiana, at the mouth of the Mississippi river delta, is suffering from particularly terrible environmental degradation—the Gulf of Mexico dead zone, which is now the size of Connecticut, the aftereffects of Hurricanes Katrina and Issac, a little old thing called Deepwater Horizon, and this disturbing oil spill, which has been “quietly leaking” for a decade.

“Duck Dynasty” is not responsible for Bobby Jindal—but oh, it benefits. Because in addition to all of the above, the state offers massive tax credits to huge companies that do business in Louisiana. Notably, that includes film and television; Louisiana’s shooting incentives are some of the most generous in the country. “True Detective” was shot there in 2013, as was “12 Years A Slave”; the Times-Picayune has a more comprehensive list. “Duck Dynasty,” as a recurring show with now over 80 episodes, is making a lot of money off this deal. Via the Baton Rouge Advocate:

“Duck Dynasty” is the most popular show in the history of A&E. Wal-Mart is the world’s largest retailer. Valero is America’s biggest independent refiner, earning $6 billion in profits last year.

But despite all that success, they’re all receiving generous subsidies from the taxpayers of Louisiana, through programs that funnel more than a billion dollars every year to coveted industries.

Every time the Robertson clan films another episode of “Duck Dynasty,” Louisiana is on the hook for nearly $330,000, at last count.

Viewed in this light, something rather alarming comes to the surface: The Robertsons are making money from the state of Louisiana… for presenting a highly politicized view of what it means to be Southern. Specifically, the clan of “Duck Dynasty” offers the posture of ignorance—the blissful state of overlooking a principality that is figuratively and literally falling to pieces. The show is technically apolitical, but functionally, entirely political. It benefits from—and crucially, reproduces—the tribalism that Amanda Marcotte dissected last week, writing about both “Duck Dynasty” and TLC’s “19 Kids And Counting”: “But such is that nature of 21st century right-wing tribalism. The Duggars are religious cultists with downright weird ideas about hair styling, but because they’re white, sanctimonious and Republican, they inspire “one of us!” feelings in the conservative base.”

Longstanding speculation contends that the beards of the “Duck Dynasty” men are fake. They’re not fake anymore, but old family photos of the Robertsons reveal a wealthy, clean-shaven family. The conspiracy theories revolve around the highly likely hypothesis that the beards are part of “Duck Dynasty”’s stunt-appeal, a way of signaling a certain ideology without coming out and saying anything.

But this is reality television, not journalism; there’s nothing inherently surprising about the fact that the characters of “Duck Dynasty” might be putting on an act that might not be entirely authentic. What’s really galling is that clever men playing dumb is a real path to success in conservative America. Rather than being presented as too selfish or obstinate to change, the Robertsons are too “simple” for the newfangled world; “Duck Dynasty,” from its self-aware mugging to Si’s circular, rambling jokes, is a package of family homestead nostalgia. The problem is, that simple, uncomplicated past that the Robertsons cling to never existed; it’s an idea propagated for selfish gain, both political and financial. The Robertsons are selling insular, selfish cluelessness as true American identity. Louisiana, unfortunately, is the state stuck with the bills.