From "n-word" handwringing to ludicrous complaints about "politicizing" a tragedy, Republicans have totally lost it 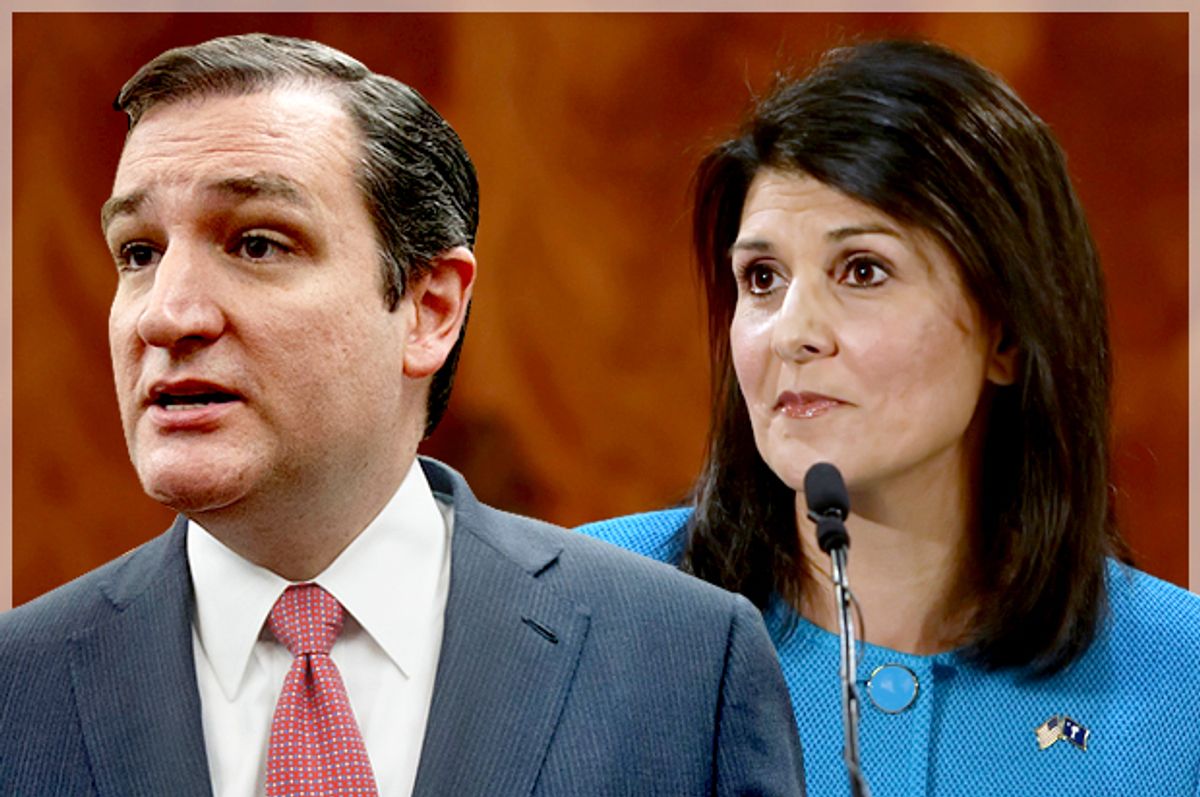 On Monday, the horrors of Charleston brought about a symbolic, but meaningful change: Republicans who had previously been unwilling to offend the neo-Confederate faction of their party took a deep breath and recommended the Confederate flag be removed from the grounds of the South Carolina Statehouse. It had been flying on the grounds somewhere since the early 1960s when white political leaders all over the South suddenly had an overwhelming urge to officially celebrate their "heritage," just as African Americans were agitating for civil rights. In South Carolina, it was recently moved from the capitol to the grounds as part of a  "compromise," and Republicans swore they'd been pushed to the brink and would move no further. But a massacre of nine people in a historic African American church by a white supremacist seems to have made them re-evaluate the value of their 50 year heritage of celebrating their resistance to civil rights.

That was the good news. The bad news is that they are now back in full "I know you are but what am I" mode, vacuously mirroring liberal arguments in ways that make no sense, and then high-fiving each other as if they've just won the national debate championship.

First, there was the "n-word" flap. Yes, all day yesterday, they ostentatiously clutched their pearls over the fact that President Obama used the actual word in an interview. No, he didn't call anyone the n-word and he didn't refer to anyone as an n-word. Obviously. He used the word to explain that just because you don't use it, it doesn't mean you aren't a racist. This was very upsetting to people who are convinced they can't possibly be racist since they don't use the word.

Fox News' commentator Elizabeth Hassleback said that she feared he'd gone completely NWA on us and was going to start throwing the word around at the next State of the Union speech. All of these fine conservative folks who decry political correctness every single day, who weep for our lost First Amendment right to free speech, were suddenly shocked, I tell you, shocked by this horrific use of a terrible word. Perhaps they would have pulled it off, had it not been for the smug, self-satisfied expressions on their faces as they pretended to be offended.

These folks really hate being deprived of their own victimhood, so the second farcical call for the smelling salts came when the AP published a photo of Sen. Ted Cruz at a gun-appreciation event over the weekend that appeared to show a huge handgun pointed at Cruz's head.

It was a strange optical illusion to be sure, and weirdly unnerving. But it was taken as an article of faith on the right that it was done on purpose as some sort of threat against the senator. At the very least, these hardcore gun rights supporters were outraged at the inappropriateness of such an image. Now this might be a reasonable reaction if it didn't come from people who were outraged that anyone would criticize Sarah Palin's use of crosshairs on a map in the wake of the Gabby Giffords mass shooting. Howard Kurtz even brought it up in yesterday's unctuous screed about (mostly liberal) politicians and pundits allegedly "politicizing" the Charleston massacre.

In 2011, some liberals blamed Sarah Palin for the Arizona shooting that wounded Gabby Giffords and killed six people because Palin’s organization had put crosshairs on a political map targeting Democratic lawmakers. I denounced it then and will continue to denounce such guilt-by-association tactics.

He even went back to Bill Clinton's famous speech after Oklahoma City, using it as a terrible example of a politician politicizing political terrorism. Indeed, he could undoubtedly have listed dozens of examples liberals decrying gun violence and right-wing extremism after mass murders and acts of domestic terrorism. Those liberals are just terrible. Terrible!

If there one person who certainly wasn't going to put up with any of it, it was Ted Cruz, who had given reporters a piece of his mind on Friday:

"It's sad to see the Democrats take a horrific crime and try to use it as an excuse, not to go after people with serious mental illness or people who are repeat felons or criminals, but instead try to use it as an excuse to take away Second Amendment rights of law abiding citizens. I'll tell you, it's reminiscent of Rahm Emanuel who said you can never let a good crisis go to waste

If there's one thing he cannot abide it's inappropriate commentary in the wake of a tragedy. As he said this past weekend at the gun-appreciation event in Iowa, while the whole world was reading the violent racist manifesto of Dylann Roof:

"You know the great thing about the state of Iowa is, I'm pretty sure you all define gun control the same way we do in Texas -- hitting what you aim at."

He went on to regale the crowd with stories of shooting ranges that allow you to shoot fully automatic weapons, commenting on how adorable his blonde wife looks while she's shooting one.

And last Thursday, as the president was addressing the nation about the tragedy in Charleston, Rand Paul shared a little joke with the folks at the Faith and Family coalition meeting as if nothing had happened.

Now that's the kind of respectful commentary we expect from our leaders in the wake of a tragedy, not all this rude use of the n-word and inappropriate images on the internet. Those are very upsetting to the delicate sensibilities of Fox News viewers. Joking around about "hitting what you aim at" the weekend after a mass murder isn't the same thing at all. After all, as Rick Perry said in the immediate aftermath, the real victims are gun owners:

"Any time there is an accident like this, the President is clear. He doesn't like for Americans to have guns, and so he uses every opportunity, this being another one, to basically go parrot that message."

As with virtually every Republican presidential candidate, Perry has walked back his initial comments substantially. They ignore racism and minimize gun violence reflexively; it's only when it's pointed out that they sound like cretins and might lose the votes of normal people that they backtrack.

And just to bring all this full circle, we have the most sanctimonious right-wing pundit on the planet, a man who sounds smug and insincere when he says "good-morning", Tucker Carlson, who suggested that the president should give up his secret service protection if he cares so much about gun control:

The president has said a number of times guns are the problem, guns cause violence. There’s nobody in the world surrounded by more armed people than President Obama himself. I notice he’s not suggesting that the people around him disarm. He wants to remain protected, but the rest of us have to go without means of self-protection.

What we’re saying is, the president’s position is that guns cause violence, guns are inherently bad and dangerous. The rest of us need to disarm and not protect ourselves. And he’s exempt from that?

He seems to think that comparing the threats faced by president of the United States to those faced by Tucker Carlson is an exceedingly clever argument. Mhm.

There's a frantic feeling to all this that shows how ill-equipped so many conservatives are to deal with the ramifications of their alliance with the radical right-wing fringe in this country. It really shouldn't be that hard for them to simply admit that racism still exists and that gun violence is a problem. Nothing could be more obvious even on a normal day. If they don't instinctively acknowledge this after a tragic event like Charleston, if it takes them days of backtracking and "clarifying" once they are informed that people are appalled by their comments, then it's pretty clear that they are not capable of leading a nation.

And yes, they are now pouting about the decision to take down the South Carolina flag as well:

They know it really is all about them but they can't seem to accept the fact that it's not something they should be proud of.