We're still a nation of cowards: The Confederate flag, guns & a political class that barely functions

Once support for the Confederate flag was untenable, Nikki Haley acted & others followed. It's not so on gun safety 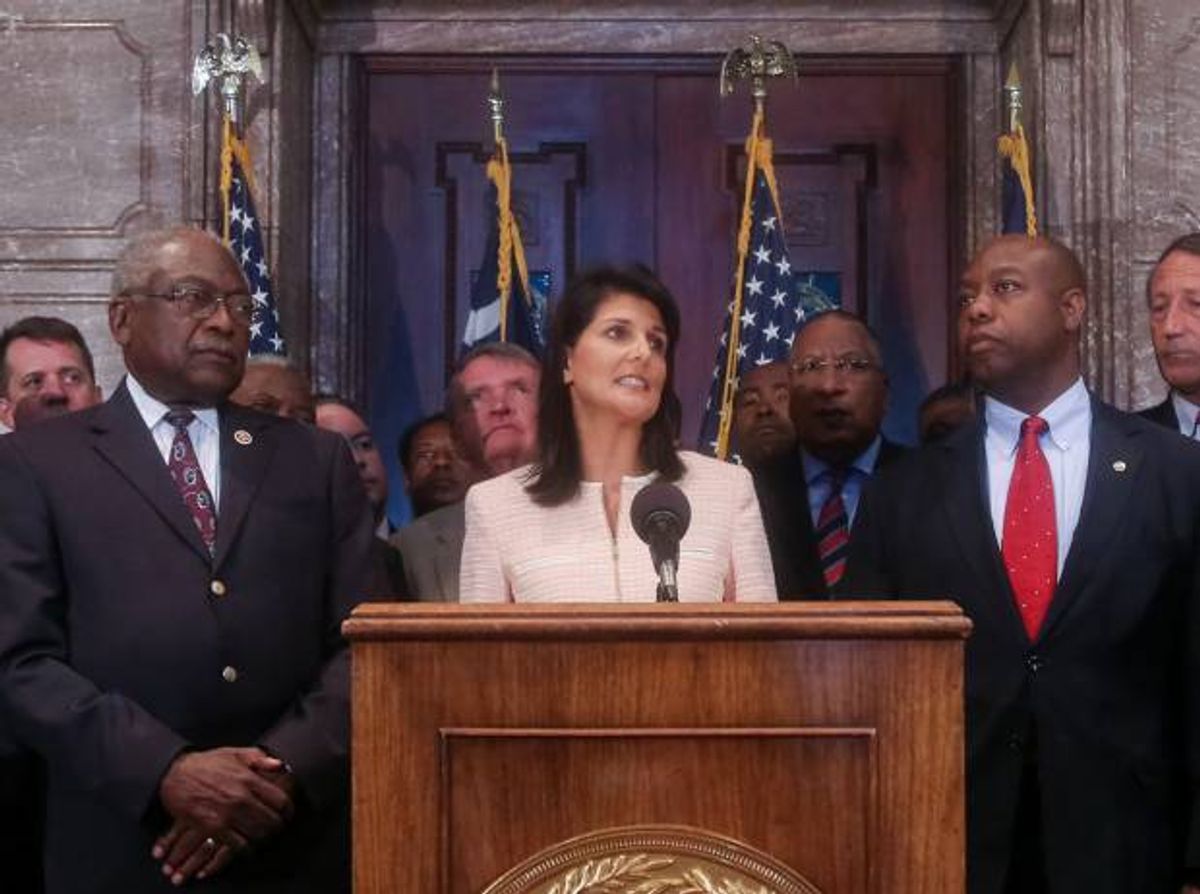 The first harbinger of change came Friday, not quite two days after the white supremacist Dylann Storm Roof allegedly opened fire at a historically black church in Charleston, assassinating the pastor and eight parishioners. The massacre reignited South Carolina’s half-century-old debate over the flying of the Confederate battle flag on the grounds of the State Capitol, and remarkably, Republican Gov. Nikki Haley passed on the chance to defend that ignoble tradition.

"What we hope is that we do the things South Carolinians do, which is have the conversation, allow some thoughtful words to be exchanged, be kind about it, come together on what we're trying to achieve and how we're trying to do it," Haley told CBS News.  "I think the state will start talking about that again, and we'll see where it goes."

Though far from definitive, Haley’s words marked a sharp turnaround from how she’d handled the Confederate question last fall, during her re-election battle against Democrat Vincent Sheheen. During an October debate, Haley defended the flag’s place of honor by asserting that she had yet to hear “a single CEO [complain] about the Confederate flag.” But in the wake of last week’s terror in Charleston, CEOs, complaints about the message conveyed by that symbol of white supremacy reached a fever pitch, hence Haley’s change in tone. Her fellow South Carolina Republican, Sen. Lindsey Graham, also recalibrated, continuing to defend the flag while acknowledging, in what can only be described as a monumental understatement, that it had been “used in a racist way.”

By Monday afternoon, after the outcry against the flag intensified over the weekend, Graham -- along with a bipartisan group of other South Carolina politicians, including GOP Sen. Tim Scott, Democratic Rep. James Clyburn, and GOP Rep. Mark Sanford -- flanked Haley as she announced her support for a legislative push to remove the flag from the statehouse grounds. Cowardly Republican presidential candidates, who had largely ducked the issue by stating that the flag was a matter for South Carolinians (which ones?) to decide, now had cover to come out against the stars and bars. Jeb Bush, who had only said he trusted South Carolina to do "the right thing," felt safe to declare that Haley had done precisely that. Scott Walker, who's been all over the map on the flag issue, had vowed to stay silent on the subject until the Charleston victims were buried, but he wasted no time Monday in saying he was "glad" Haley had come down where she did.

Far more interesting than the GOP field's shape-shifting are the potential ripple effects of Haley's move. Hours after Haley's press conference yesterday afternoon, Mississippi's Republican Speaker of the House, Philip Gunn, called for the removal of the Confederate emblem in his state's flag. "We must always remember our past, but that does not mean we must let it define us," Gunn said. "As a Christian, I believe our state's flag has become a point of offense that needs to be removed. We need to begin having conversations about changing Mississippi's flag."

Whether Haley's announcement heralds a broader shift remains to be seen; Mississippi's GOP Governor, Phil Bryant, isn't backing Gunn's call, and while other GOP elected officials have changed their tune in recent days, the entirely predictable right-wing media backlash is already in full swing. Descending further into self-parody, Bill O'Reilly channeled the grievances of reactionary whites last night, declaiming that the Confederate flag "represents bravery" in battle for anyone smart enough to "see it in a historical context."

O'Reilly undoubtedly speaks for a sizable chunk of the conservative base -- last fall, a Winthrop University survey found that nearly three-quarters of white South Carolinians supported keeping the flag where it is, and as my colleague Joan Walsh points out, the Republican contenders' timidity on the issue shows a party that still lives in fear of the rabid, white right -- but as the American electorate becomes increasingly diverse, Republicans will have little choice but to follow Haley's (belated) lead. And as Mississippi's revived flag debate demonstrates, that change may unfold more quickly than most observers expected.

Contrast yesterday's rapidly moving developments with the utter lack of movement on gun safety reform. While the carnage in Charleston has rightfully reinvigorated the national discourse on racial justice, there has been no serious effort to address America's gun violence epidemic; the most we've heard are the obligatory, unheeded calls for sanity from President Obama and Democratic presidential contenders Hillary Clinton and Martin O'Malley. If this is unsettling, it's not particularly surprising, either. Two and a half years after the Sandy Hook Elementary School massacre in Newtown, Connecticut, we have yet to enact a single new gun restriction on the federal level; even post-Newtown epiphanies of onetime gun-rights enthusiasts like Sens. Joe Manchin (D-WV) and Pat Toomey (R-PA) proved no match for the political power of the gun lobby, which beat back Manchin and Toomey's 2013 legislation to require background checks for gun purchases. If the deaths of 20 young children and six staff members could not move us toward even the most modest gun safety reforms, it's hard to envision any scenario under which the country enacts meaningful gun safety reforms.

The unavoidable truth is that we remain a nation of cowards, to borrow a phrase from former Attorney General Eric Holder. We see it in the pathetic vacillations of Republicans asked about the Confederate flag, and we see it even more vividly in our unwillingness to confront a well-funded lobby intent on steamrolling even the most watered-down gun safety reforms. I'd also posit that we see it in where Haley and assorted Republicans have chosen to rethink their stances.

Now, there's nothing cowardly about calling for the removal of the Confederate flag, and the fact that the flag is only a "symbol" does not detract from its significance -- it was a symbol that communicated a vile message of exclusion and hatred. But is it not telling that we're unlikely, at this stage, to see anything more than this symbolic gesture? (A gesture that should have been made well before 2015, at that.) Haley's often self-aggrandizing press conference yesterday was the performance of a politician who thinks she's executed an act of bold leadership -- not someone who did the bare minimum, and only after years of stonewalling.

Gun safety reform will not bring back Clementa Pinckney and his eight parishioners, nor will it prevent every kooky extremist from carrying out his demented designs. But it makes future tragedies less likely. As Katie McDonough noted here earlier this month, recent Johns Hopkins University study found that implementation of Connecticut's handgun permit program correlated with a 40 percent drop in gun-related homicides, corroborating an extensive body of research showing that gun control reduces gun crime. But that research base has existed for years, and it has failed to loosen the gun lobby's grip on policymakers. If Nikki Haley and her ideological compatriots give that research a second look -- and formulate policy accordingly -- I'll be fulsome in my praise. I'm not holding my breath.