The Wisconsin governor is trying his best to suck up to the religious right. It could end up costing him big time 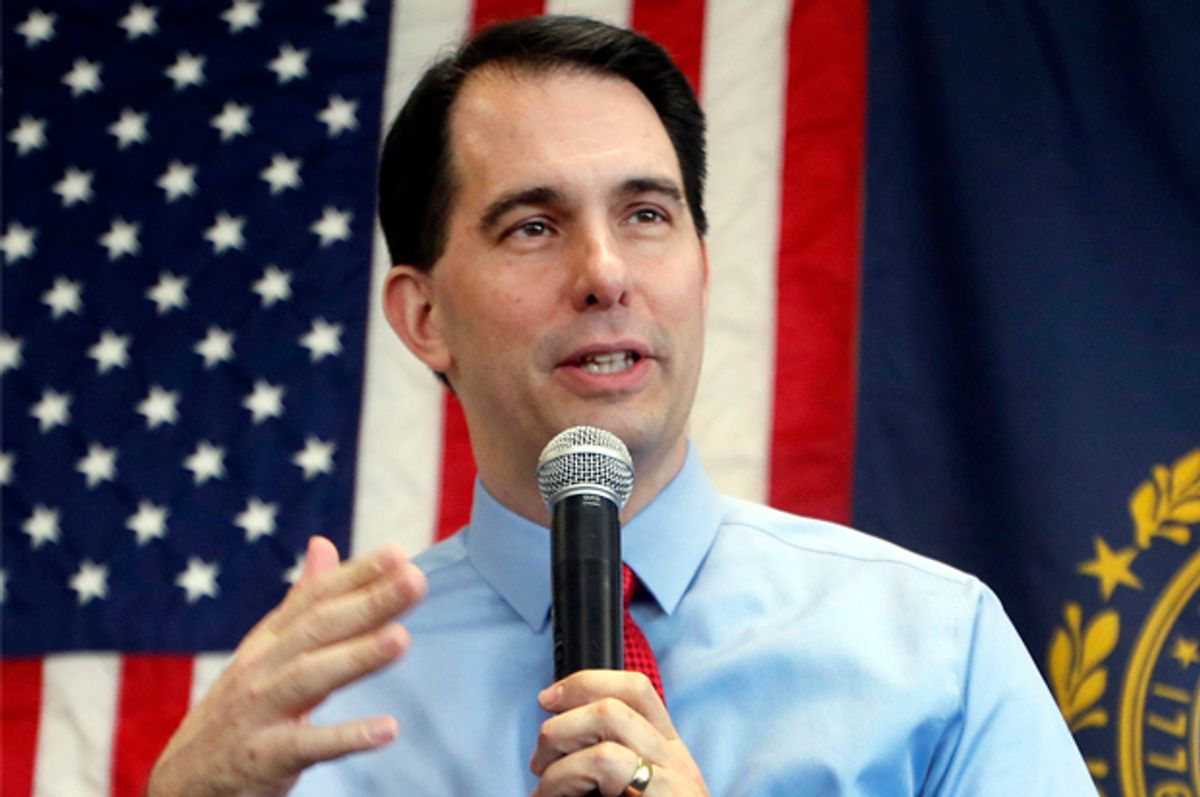 If there was one thing everyone thought the Republicans had agreed upon in the wake of the 2012 and 2014 elections it's that it's really isn't profitable for their candidates to forget that half of the people who vote happen to be women. After the embarrassing spectacles of Todd "legitimate rape" Akin and Richard "pregnancy from rape is God's will" Mourdock, the consensus was that it would be best to avoid all those unpleasant topics as much as possible. And for the most part the GOP presidential candidates have indeed sidestepped these issues so far.

Well, except for the still undeclared "top tier" candidate from Wisconsin, Scott Walker. He just can't stop stepping on that gender third rail. But then that's nothing new. After all, this is a Governor who repealed an equal pay law. And that was in the midst of his epic public employee union busting that affected far more women than men, since it exempted the male dominated police and fire departments, and really stuck it to the educators. (In his mind, all those kindergarten teachers were akin to ISIS.)

I have written about how his best efforts to placate the religious right (with whom he has a longstanding affiliation) have still left him with a credibility problem among the faithful, since he has made a few stray comments over the years that have left them doubting his sincerity. He has since gone out of his way to prove his Akin-Mourdock kinship by making bizarre statements about forced ultrasounds, while asserting that an abortion ban without exception for rape or incest is no big deal since it's "in the initial months" when women are "most concerned about it."

Interestingly, in the case of Wisconsin's proposed 20 week abortion ban (based, by the way, on junk science about alleged fetal pain) Walker made it seem as if he was simply following the legislature's lead, going along with whatever they chose to send him. According to yesterday's New York Times, that wasn't exactly right. Not only did he request the 20 week ban, he specifically asked that it contain no exceptions for rape and incest:

Mr. Walker repeatedly refused to say if he favored such a ban during his close re-election last year, when polls showed him unpopular among women. In March, as doubts about his anti-abortion credentials were raised by national conservatives, he pledged to sign a 20-week ban that was “likely to come to my desk.”

What he did not explain was that he had asked Wisconsin lawmakers to send him just such a bill, during a meeting in his office with Mr. Fitzgerald and Robin Vos, the speaker of the State Assembly, also a Republican.

“Walker weighed in and said the 20-week abortion ban is something he would like to see hit his desk,” Mr. Fitzgerald said. “It sent a message to us.”

The governor specified that the bill should include no exceptions for rape or incest, according to Mr. Fitzgerald.

That's the allegedly "mainstream" candidate the political establishment thinks has a real chance to win over the broad middle of the country, someone who is pandering to the most retrograde social conservatives in America. (For the record: 75 percent of Americans believe abortion should be legal in cases of rape and incest.) Just last week he appeared at the Faith and Freedom Coalition confab and bragged about his work at so-called "crisis pregnancy" centers, institutions which manipulate vulnerable young women with lies about abortion causing breast cancer and leading to sterility, and birth-control pills causing abortion.

And Walker is still working hard at insulting women in other ways, too. Just last week on a conservative radio show he complained once again about pay equity, saying that it's just another example of President Obama and Hillary Clinton's desire to "pit one group against another." Evidently he thinks paying women the same as men is a form of combat in which one side must lose. That's absurd, of course. Men and women are very often allies in an organizational concept we call "families." When women in those families make more money men benefit as well. It's the ultimate win-win. Not to mention that, to most decent people, equal pay for women is a matter of simple fairness.

But Walker didn't stop there. He also said that equal pay legislation was a liberal plan to get Americans “dependent on the government”:

So now working women are government dependents if they want to be paid equally with men? That's a very strange way to look at it, not to mention a very weird way to attract voters. One might just as well say that anyone who earns overtime pay or benefits from worker safety laws is "dependent." The scary thing is that Walker probably thinks those laws should be repealed as well.

Walker may be able to assuage his right wing allies' reservations about his commitment to the cause. He appears to think that insulting women is one smart way to do that. Unfortunately for him, it's costing him his reputation as someone who can successfully pretend to the rest of the country that he's not an extremist. He's not alone in trying to walk that line in this election cycle but he certainly doesn't have any gift or talent for making it look easy. It's getting downright uncomfortable to watch him try.