The women of Litchfield's tastes run the gamut, from Drake to "Annie Hall" to your new friend Justin Bieber 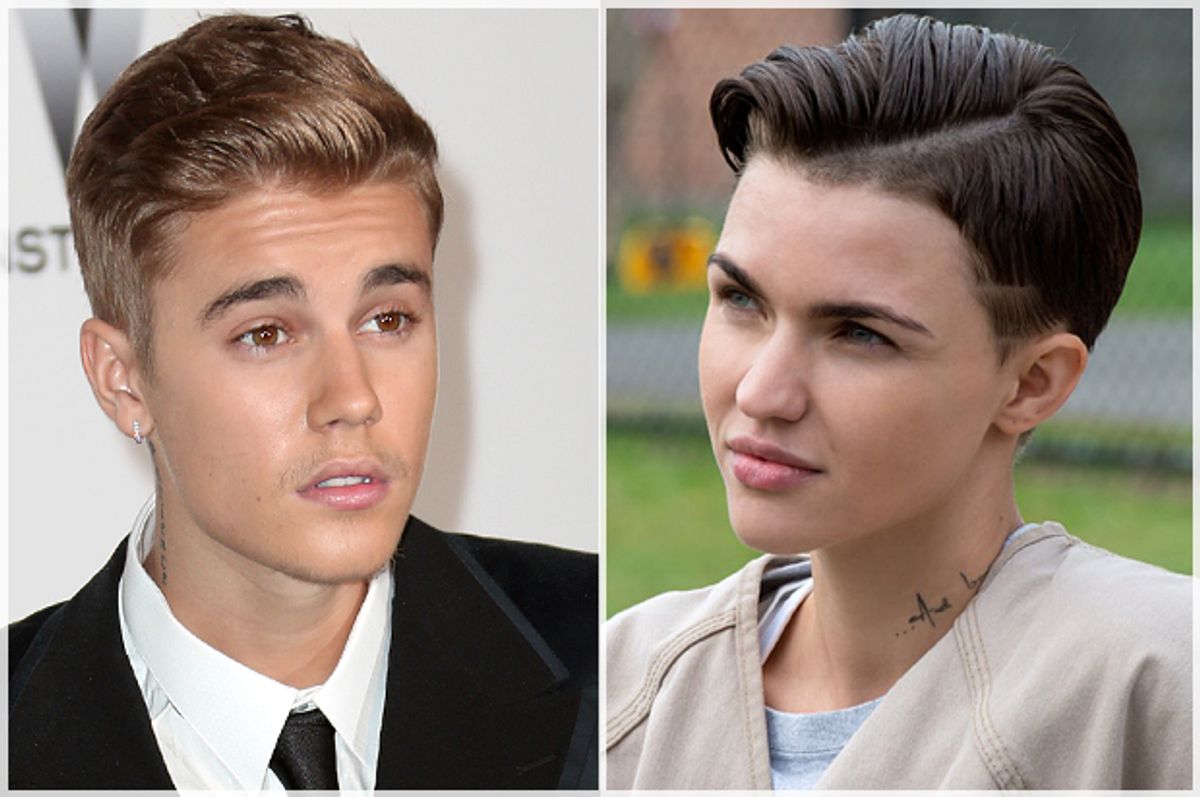 "Orange Is the New Black" is a show that has always been on point with its pop-culture references, and this season is no exception. After all, the ladies of Litchfield have big imaginations (all hail "The Time Hump Chronicles!"), plenty of time to catch up on their reading, and ample cause to embrace escapism instead of facing the cold realities of life in khakis.

Here's a look at 10 highlights from this season:

1. When Brooke Soso was totally familiar with the “yes and" philosophy:

2. When Taystee and Poussey held a ceremony for the books in the library, and their epic eulogy for the beloved classics they lost: "Great Expectations," "The BFG," "The Dictionary," "A High Wind in Jamaica," all the David Sedarises, "The Treasure of the Sierra Madre," "The Tale of Squirrel Nutkin," and of course, the Jonathans: Swift, Lethem, Tropper, Franzen, Kellerman, Livingston Seagull.

3. And when Taystee and Poussey proved yet again that their literary taste is on point, especially when it comes to YA fiction:

Janae: “What you want with that voodoo magic anyhow?”
Taystee: “Don’t be playing around with that. Mess with the evil forces you’ll be out like Cedric Diggory.”
Cindy: “Who?”
Taystee and Poussey: “Harry Potter.”
Taystee: “Died in the Triwizard Tournament.”

4. When Pennsatucky gave a shout-out to the famous Philadelphia Eagles QB:

Pennsatucky: "I would have five [children]. Or six, if you count the one that fell out after the night in the cave. Would have been a miracle baby, like Tim Tebow."
Wanda Bell: "Based on the state of your mouth when you came in, I’m going to say your baby wasn’t on the star athlete track."
Pennsatucky: "Oh yeah? Well neither was Tim Tebow. You know, when his momma was pregnant she had the sickness and the doctors told her not to have the baby but she had it anyhow? And she was on dysentery medicine, and she was in a Filipino town."
Eliqua Maxwell: "He wasn’t such a great quarterback."

5. When Boo invoked "Freakonomics" to explain the social benefits of legal abortion. Asking Pennsatucky if she’d ever read the famed economic theory text, Boo referenced the famous “Where Have All the Criminals Gone?" chapter, which claims crime fell in the ‘90s as a result of Roe v. Wade. Or as Boo puts it, in her inimitably brash fashion:

7. When all anybody knew about Judaism was "Annie Hall":

“The whole brood of Hayes, we lived under the Cyclone on Coney Island, right? Brooklyn in the house. A-yo! And, uh, oh, I was always a nervous kid growing up, always worrying about the universe expanding, and and so, my parents took me to a shrink, and the shrink was like, ‘Cindy, quit your worrying. The universe be chilling for another billion years.’ But I couldn’t stop worrying and cooking lobsters and hanging with women in suspenders.” -- Cindy

Taystee: “Man, I told that Rabbi I was Drake’s cousin, worked the whole Black-Jewish mafia thing. But I guess he ain’t never heard of Drake.”
Cindy: “Well, fool, you’re, like, fifty shades darker than Drake.”
Taystee: “Fifty Shades of Drake!”

9. When the unionizing guards paid tribute to their populist forebears by breaking into a rousing chorus of “Do You Hear the People Sing” from "Les Mis" — and when they had similar feelings about the 2012 film adaptation as we did (“Poor Russell Crowe. The guy sings like a dead carp getting a blow job.")

10. When Alex said what we were all thinking about Ruby Rose, sniping at Piper that she was just “hanging out with our new friend Justin Bieber.” Almost prophetic, if you ask us: