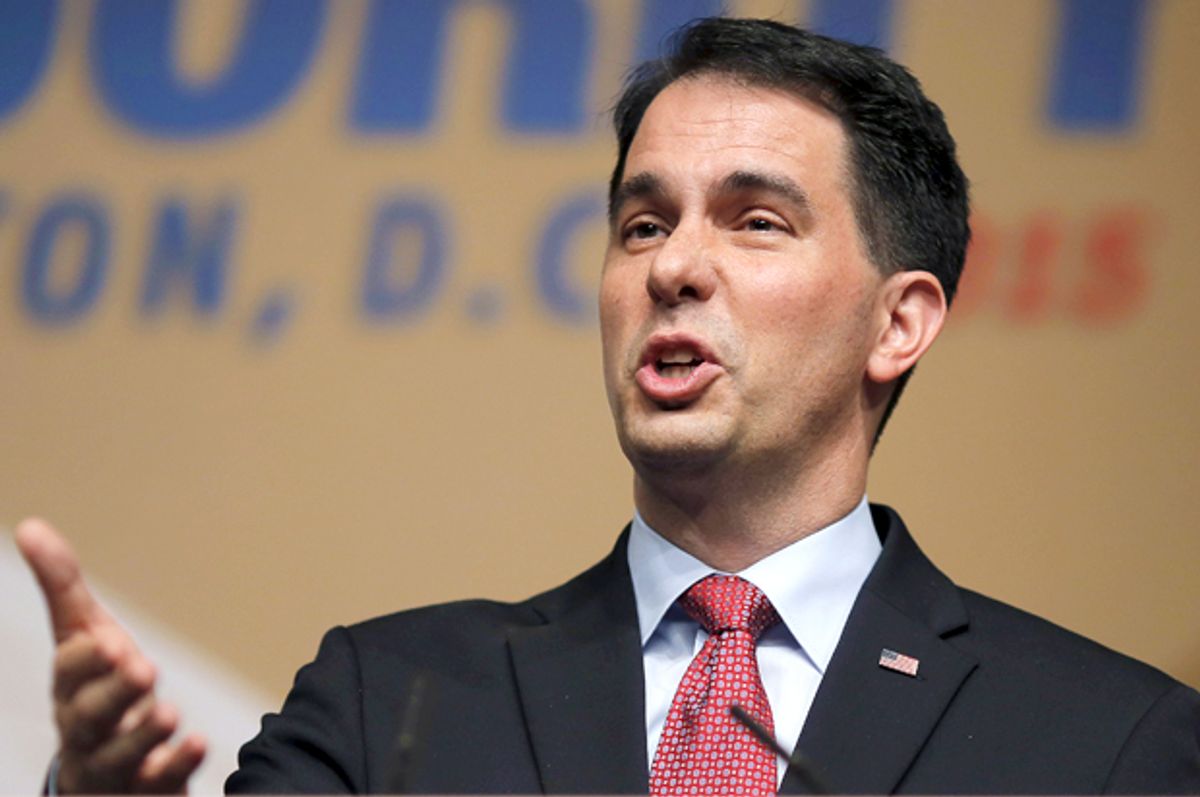 Wisconsin Gov. Scott Walker has some advice for his party about how to beat a female candidate, namely Hillary Clinton. (Emily’s List’s Jess McIntosh explores “the Scott Walker Playbook" here.) He thinks his success defeating rival Mary Burke, a businesswoman whose only political experience came as a Madison school board member, makes him qualified to face down the most popular living female in the U.S. and the world.

Analysts have marveled at Walker’s willingness to alienate female voters with his ugly embrace of a 20-week abortion ban that includes no exceptions for rape or incest. But I think he revealed his strategy to deal with the gender gap in his race with Burke last year: He thinks he can drive up the male vote with tone-deaf attacks on abortion and pay equity.

Asked about Burke’s strong support among women, he turned it around and claimed that the real problem was Burke’s unpopularity with male voters: “[T]he bigger trend is not if I have a gender question, it’s actually that she’s off the chart from where a Democrat normally is, gender-wise, with male voters as opposed to female.” In the end, Burke’s margin with female voters wasn’t enough to beat Walker in Wisconsin.

Walker thinks the same strategy will work with Hillary Clinton. But again, he’s way out of his depth, extrapolating from a Wisconsin race against a political neophyte to offer advice about beating Clinton in a 50-state campaign. He sounds especially clueless talking about pay equity, suggesting the policy is part of Clinton’s strategy to “pit one group against another group out there.” He told Boston Herald Radio: “I believe that the president and now Hillary Clinton tend to think that politically they do better if they pit one group of Americans versus another.”

Never mind that pay equity helps not just women but the men in their family. Walker then made a bizarre leap, equating pay equity with welfare. He claimed that Democrats’ “measure of success in government is how many people are dependent on the government, how many people are dependent, on whether it's Medicaid or food stamps or health care or other things out there.” So achieving pay equity for women is the same as putting them on welfare?

Walker also, bizarrely, insists his strategy will appeal to female voters looking for toughness. “I don’t think the answer is to run away from your positions,” he said, insisting candidates must simply “make it clear to the American people that this is where you stand.”

That’s hilarious given that Walker ran away from his tough anti-choice policies while running against Burke, releasing a shameful ad in which he pretended to sympathize with a woman’s “agonizing” choice to have an abortion and suggested his draconian anti-abortion policies “leaves the final decision to a woman and her doctor.”

Walker has proven himself adept at white backlash politics in his career, riding to power on a platform that pits the heavily African American city of Milwaukee against the much whiter state of Wisconsin. Now he thinks he can channel a male backlash. It’s true Clinton is running much stronger among female voters.  A Gallop poll earlier this year found 56 percent of women view Clinton favorably while 32 percent view her unfavorably, but men were split almost evenly: 44 percent held a favorable view, 45 percent unfavorable. So expect other GOP analysts to embrace Walker’s efforts to drive up their margins with men.

But what worked in the homogenous and polarized state of Wisconsin doesn’t translate to the fight to get 270 electoral votes, in battleground states where female voters hold the key to victory. I’m sure the Clinton team would be happy to face down Walker’s male backlash politics, if he makes it through the GOP primary.