Carly Fiorina's "feminism" is an elitist lie: I read her manifesto so you don't have to!

I really wish I had been eating a bagel instead of reading this, but here we are 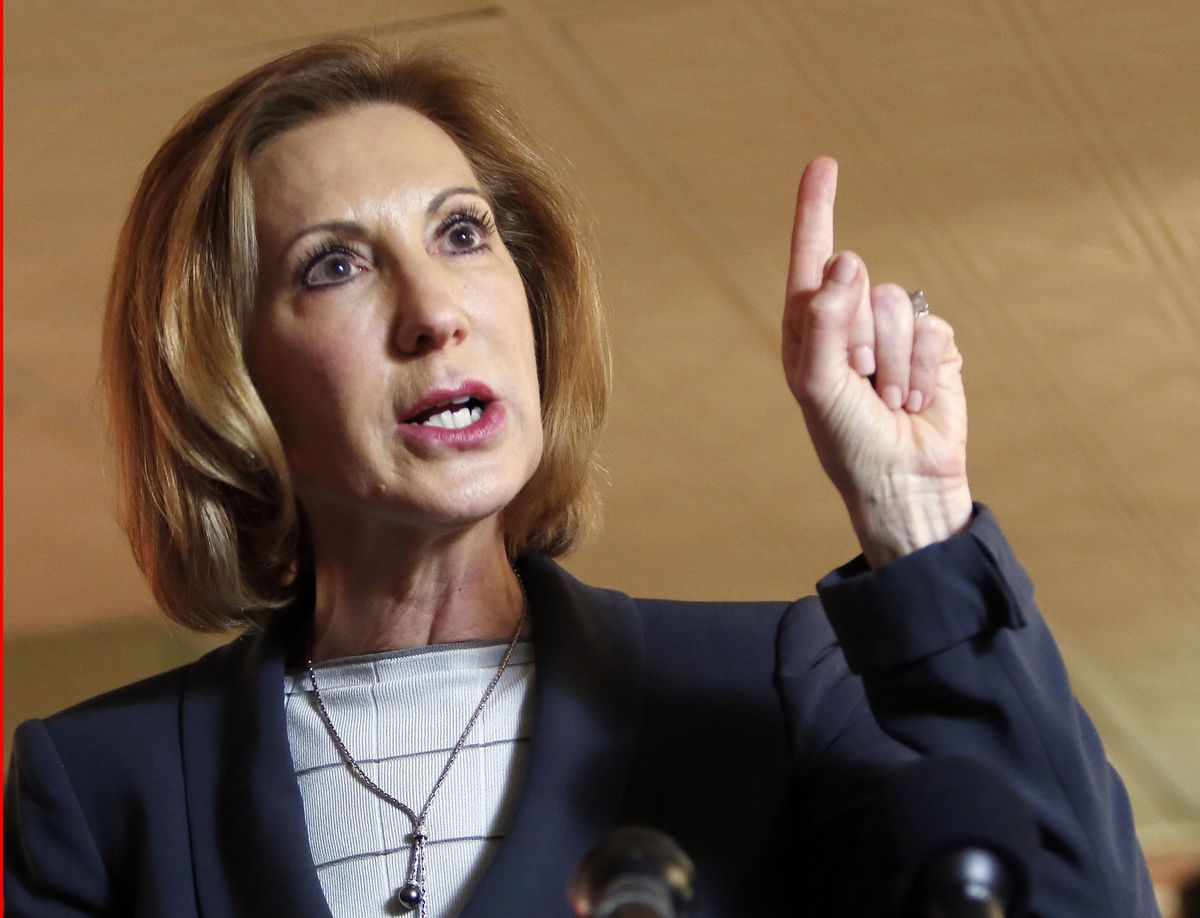 So Carly Fiorina wants to be a feminist. Fine. Great. Welcome to the sisterhood, CARLY!

Of course, the Republican presidential hopeful wants to be a feminist on her own terms only, which is likely why she has drafted a bizarre and contradictory manifesto of sorts, published on Medium this week. In the post, not-so-aptly titled "Redefining Feminism," Fiorina actually does a good job of highlighting the problems most often raised by feminists as those in need of solutions: workplace sexual harassment (which she illustrates with her own horrifying examples), poverty (especially among single mothers), access to affordable healthcare (especially contraception) and the dearth of women in corporate leadership positions (which Fiorina seems to find most disconcerting of all).

She also defines a feminist as “a woman who lives the life she chooses” and claims “we will have arrived when every woman can decide for herself how to best find and use her God-given gifts.” That’s pretty much in line with mainstream feminist ideals, which center on opportunity and choice — whether that means “a woman may choose to have five children and home-school them” or to terminate a pregnancy; whether she “may choose to become a CEO” or to spend her minimum wage earnings on luxuries like food. Being a feminist is, fundamentally, about advocating for freedom, so it’s not much of a surprise a hardcore conservative is willing to try on the label.

But then Fiorina gets to some weird fork in the road and makes a hard right, pushing a brand of feminism that already exists and has a name: it’s corporate, minus any emphasis on access to reproductive healthcare and choice. Both happen to be crucial to women’s economic success and to achieving gender parity in the workforce, and both happen to be things Fiorina has time and again opposed.

And so she suggests, in flowery language devoid of any substance — this is a campaign, after all — that we fix these problems with…policies that merely exacerbate them. Let’s go through some of this together, shall we?

Yes, women now make up 45 percent of the labor force for S&P 500 companies. However, the majority of low-paying jobs are held by women who make up over half of minimum wage earners. Eighteen million women live in poverty. A quarter of all US families are headed by a single mother.

True; true; true; true again. But Fiorina isn’t really talking about the millions of women living in poverty — she’s talking about the women at S&P 500 companies, who she essentially encourages to “lean in.” In doing so, she implicitly acknowledges that the opportunity to do exactly that is tied to class, specifically, which in this country also means it’s tied to race. And yet despite acknowledging the socioeconomic barriers that preclude equal opportunity, the candidate suggests that she was able to lean just as far as a black single mother who works at a fast food restaurant in the rural south, because meritocracies or something:

Let’s move to a pay-for-performance meritocracy and make promoting high-achieving men and women a top priority. We also need to give women the tools that they need to rise through these meritocracies — and that starts with reforming our education system.

Meritocracy in the workforce does little to rectify the fact that women are routinely paid less than their male counterparts, nor does it address the lack of a living wage in the low-paying fields that women do actually dominate (at least in numbers). Fiorina notes, as a positive, that women’s chances of graduating from college and attaining graduate degrees have improved dramatically over the past several decades, but the financial benefits haven’t followed; studies have shown that women with more education actually make less as they earn more degrees.

She also attempts to attack a welfare structure that would make it impossible for a woman to continue receiving benefits should she get a salary bump that moves her out of poverty — but the women and families who rely on these social services aren’t getting bumped to $55,000, as Fiorina suggests. They’re making $14,000 annually, without benefits or paid leave, if they’re lucky. And the GOP wants to quash the federal minimum wage, so they’ll need even more luck to keep raking in that $7.25/hour.

We also know that reducing out-of-wedlock births is critical. Single mothers face a significant uphill battle for them and their children. They earn less and get fewer promotions. In fact, single mothers earn $19,000 less per year than married mothers.

Unfortunately, out-of-wedlock births are on the rise. In 2012, the federal government estimated that over 40 percent of all births were out of wedlock. Women must have access to all of the information and resources they need to make positive decisions about their families’ future.

Speaking of protecting the status quo, while the Left fights to protect late term abortions and sues the Little Sisters of the Poor to enforce Obamacare mandates, they oppose over-the-counter birth control. It’s time for over-the-counter birth control, which will drive down prices and increase availability. When Claritin moved over the counter, the price was cut in half in less than a year. Today, you can get a month’s supply for $3.

God, there is so much to unpack here, and I haven’t even gotten to eat breakfast yet.

How curious that Fiorina, who has remained staunchly anti-choice despite previously running for Senate in California, would acknowledge the necessity of making “all of the information and resources” available to women when it comes to reproductive healthcare decisions. How curious too that she would criticize opposition to Republicans’ over-the-counter birth control plan, which is merely another scheme to dismantle the Affordable Care Act and once again saddle women with the burden of paying for basic healthcare.

What's scariest about Fiorina's essay is not that it's wrong, but that it's delusional: She displays an understanding of the key issues women face, then asserts that the government should do nothing about any of it. Ultimately, what Fiorina displays is the sort of moral bankruptcy that seems to be rampant among conservatives, especially when it comes to women's lives. She isn’t promoting a redefinition of feminism, as she suggests. Fiorina is just peddling the same old right-wing bullshit and calling it by a different name. But she should know, perhaps better than anyone, that women won't buy it.