Fox News has a conspiracy theory for the ages: Obama secretly wants his healthcare law destroyed! 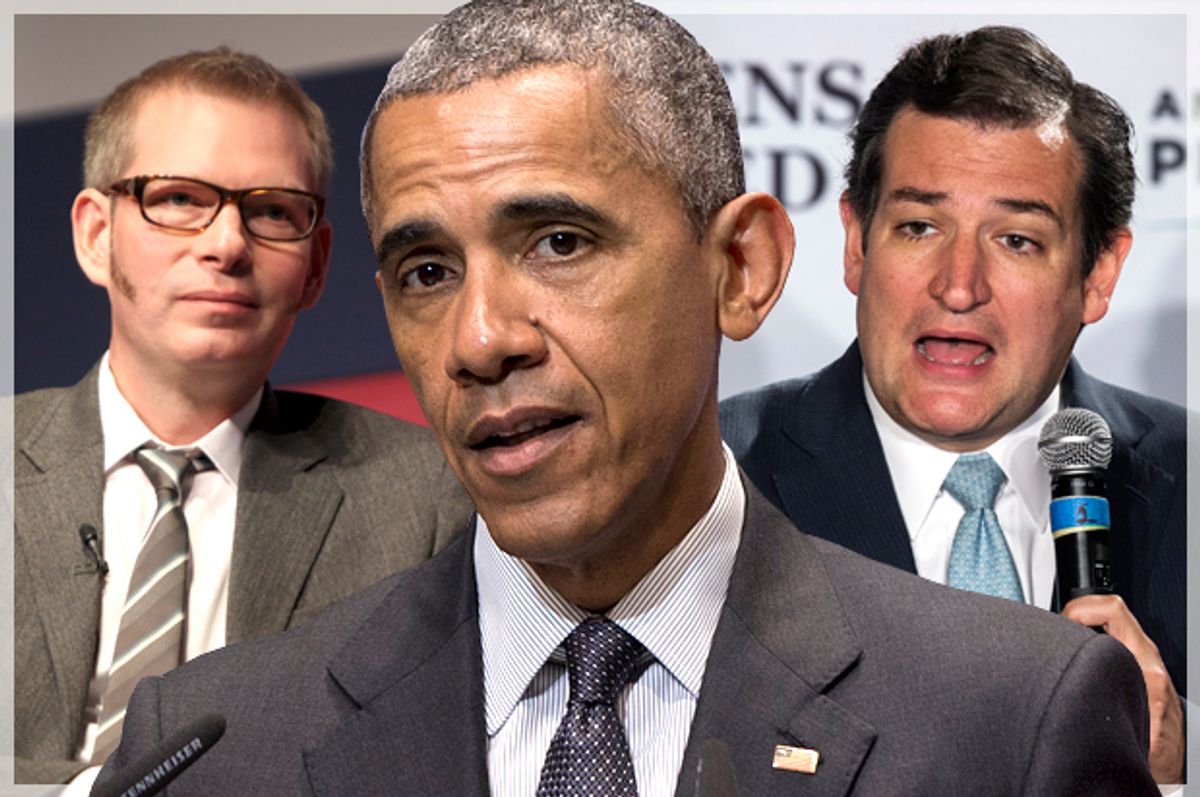 Today could very well be the day we get a Supreme Court ruling in King v. Burwell. Or it might not be. The ruling could come tomorrow, or Monday. Either way, there isn’t much time left before we transition to the next phase of Affordable Care Act’s life, with or without health insurance subsidies in the majority of states. And given that time is short, I wanted to seize this moment to share with you, my beloved reader(s), one of the hottest King v. Burwell takes that has yet been cooked up.

To recap, the plaintiffs in King v. Burwell seize on four words in the text of the Affordable Care Act to argue that the law is written in such a way that the federal government cannot legally dole out health insurance subsidies to residents of states that use the federal insurance marketplace. The legal minds who dreamed up the case contend that Congress intentionally drafted the bill this way in order to effectively coerce the states into setting up their own marketplaces – build your own exchange, or your residents won’t get money to help pay for health insurance. According to this mythology, the administration didn’t anticipate that so many states would refuse this deal, and so it ordered the IRS to dole out the subsidies in direct violation of the law.

Making this argument requires one to ignore everything one knows about the drafting and passage of the ACA, embrace some fantastical leaps of logic, and deny obvious truths in a spirit of deliberate and pernicious bad faith. And conservatives happily embraced this warped history of the ACA because King v. Burwell carries the potential to do real damage to Obamacare.

That brings us to Matt Kibbe, the outgoing CEO of the Tea Party astroturf group FreedomWorks. Kibbe sees something else happening in the administration’s implementation of Obamacare – something far more sinister than the pedestrian illegality that the rest of the conservative movement has convinced itself of. He wrote an Op-Ed for Fox News a couple of days ago confidently predicting that the Supreme Court will rule for the plaintiffs in King v. Burwell and cripple the Affordable Care Act, and Obama wants it that way.

Read, and be scandalized:

Obama is not worried about the Supreme Court ruling against him, he’s banking on it. It gives him an opportunity to blame Republicans for robbing people of their health care. By taking no action, he can point fingers at everyone else for spoiling his vision of government-run health care.

It’s the ultimate insider play: pass a broken law in a one-sided, partisan way, lie to people about what the law does, allow the IRS to implement the law illegally, and then, when it all falls apart, fiddle while America burns in the interest of scoring political points.

I’m not entirely sure where to start with this, but here goes. I don’t know the president and I haven’t had the opportunity to ask his opinion of the case (though if he’s reading and he wants to sit down for an interview I can probably move some things around). However, I feel pretty confident in asserting that he’d rather the court not blow a giant hole in his legacy-defining healthcare law, even if doing so would provide him with the rare and precious gift of “an opportunity to blame Republicans.” Seems like he’d rather have a functional healthcare law and not put millions of people at risk of losing their insurance. But I only assume that’s the case because I don’t view the president as an absurdly misguided Machiavellian sociopath.

To that point, Kibbe seems to be suffering from the same strain of cognitive dissonance that is afflicting most conservatives and Republicans who are backing the plaintiffs in King. On the one hand, he thinks Obamacare is an obvious failure – a “broken law” that isn’t living up to the promises that attended its passage. On the other hand, he acknowledges that stripping away the subsidies that are at the heart of Obamacare’s success would be disastrous – America will “burn,” he writes, when they’re taken away. And, of course, Kibbe is very much of the opinion that the subsidies should be stripped away by the Supreme Court. He just thinks Obama should shoulder the blame for it instead of the conservatives and Republicans who are actively pushing to achieve that end.

It’s utter gibberish, and I highlight it because it stands out as one of the more extreme examples of the contorted nonsense that conservatives have eagerly espoused as part of the war on Obama’s healthcare reform law. Hopefully by the end of the day, or by the end of next week, we won’t have to deal with this garbage anymore.