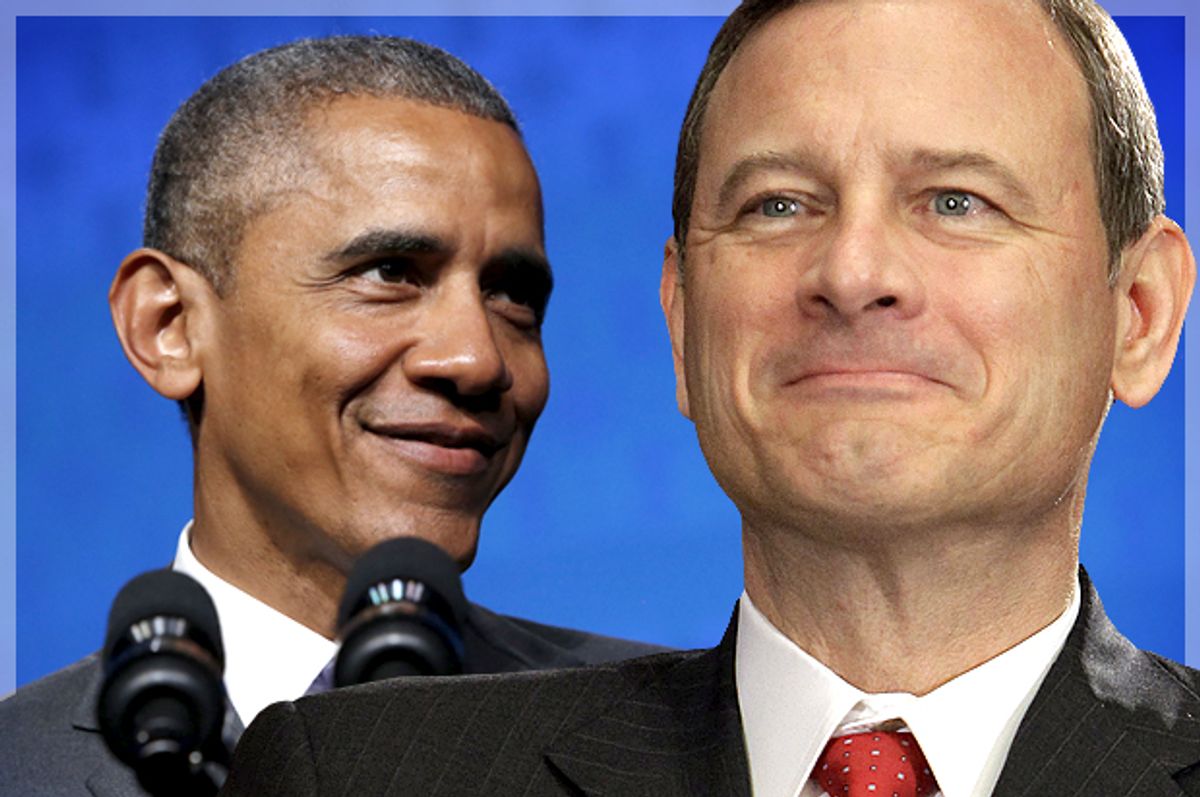 Supreme Court Chief Justice John Roberts' first major opinion on the Affordable Care Act, in 2012, was a hedge. It upheld the constitutionality of the individual mandate, sure, but not on the administration's preferred Commerce Clause grounds. Roberts instead insisted that the individual mandate was within the government's taxing authority. He then took a great big bite out of the ACA's Medicaid expansion, effectively allowing states to opt out. Dozens of them have, and millions of low-income people in conservative-led states remain uncovered as a result.

The consensus out of March's oral arguments in King v. Burwell was that the court would uphold the availability of premium subsidies on federally facilitated exchanges, either 5-4 or 6-3. Today we learned that it was the latter, with Justices Roberts and Kennedy joining the Court's four liberals and Roberts writing the opinion.

I fully expected Roberts to hedge his decision for the government with some sort of sop to conservatives. I'm happy to say that I was wrong: his decision is a total victory for the law's defenders. The furthest criticism he offers the Obama administration and the congressional Democrats who wrote the decision is some chiding about how the law could have been more thoroughly proofread -- something the administration and Democrats are willing to admit.

Roberts, notably, does not lean on Chevron deference, as the Fourth Circuit decision upholding the legality of the subsidies did: that the law's wording "'constitutes an implicitly designation from Congress to [the IRS] to fill in the statutory gap.'" In the majority's reading, Congress did not authorize the IRS to determine, one way or another, whether people in states with federal exchanges were eligible for premium subsidies or not.

The tax credits are among the Act’s key reforms, involving billions of dollars in spending each year and affecting the price of health insurance for millions of people. Whether those credits are available on Federal Exchanges is thus a question of deep “economic and political significance” that is central to this statutory scheme; had Congress wished to assign that question to an agency, it surely would have done so expressly. Utility Air Regulatory Group v. EPA, 573 U. S. ___, ___ (2014) (slip op., at 19) (quoting Brown & Williamson, 529 U. S., at 160). It is especially unlikely that Congress would have delegated this decision to the IRS, which has no expertise in crafting health insurance policy of this sort. See Gonzales v. Oregon, 546 U. S. 243, 266–267 (2006). This is not a case for the IRS. [p. 8]

Roberts' decision to eschew Chevron is, in a way, a relief for both the law's defenders and Republican Party politicians. Had the Court applied Chevron deference, whichever administration is in charge would be able to interpret the availability of subsidies on federal exchanges. For the ACA's supporters and beneficiaries, that would have meant that the next Republican president would have had the authority to rewrite the rule to deny subsidies for people in 30-some states. Republican presidential candidates, meanwhile, would've come under intense pressure to pledge to eliminate the subsidies when they got into office, even if that would have made health insurance markets uneconomical.

What the Court needs to do, then, is interpret what the hell Congress meant in writing this statute, since it clearly wasn't passing it on to the IRS to figure something out. And here, to conservatives' wincing, comes that dirty word that they so despise: "context."

If the statutory language is plain, we must enforce it according to its terms. Hardt v. Reliance Standard Life Ins. Co., 560 U. S. 242, 251 (2010). But often times the “meaning—or ambiguity—of certain words or phrases may only become evident when placed in context.” Brown & Williamson, 529 U. S., at 132. So when deciding whether the language is plain, we must read the words “in their context and with a view to their place in the overall statutory scheme.” ... Our duty, after all, is “to construe statutes, not isolated provisions.” [8-9]

The majority finds that when the statute is "placed in context," its meaning becomes clear. Though section 36B of the law -- the key part of the challengers' case -- says that premium subsidies are available to those who purchased plans "through an Exchange established by the State," the law's later provision for the federal government to set up "such Exchange[s]" in states that "elect" not to set up their own exchanges shows ambiguity in the use of "State." Emphasis ours:

Although phrased as a requirement, the Act gives the States “flexibility” by allowing them to “elect” whether they want to establish an Exchange. §18041(b). If the State chooses not to do so, Section 18041 provides that the Secretary “shall ... establish and operate such Exchange within the State.” §18041(c)(1) (emphasis added).

By using the phrase “such Exchange,” Section 18041 instructs the Secretary to establish and operate the same Exchange that the State was directed to establish under Section 18031. See Black’s Law Dictionary 1661 (10th ed. 2014) (defining “such” as “That or those; having just been mentioned”). In other words, State Exchanges and Federal Exchanges are equivalent—they must meet the same requirements, perform the same functions, and serve the same purposes. Although State and Federal Exchanges are established by different sovereigns, Sections 18031 and 18041 do not suggest that they differ in any meaningful way. A Federal Exchange therefore counts as “an Exchange” under Section 36B.

Anyway, we “must do our best, bearing in mind the fundamental canon of statutory construction that the words of a statute must be read in their context and with a view to their place in the overall statutory scheme.” Utility Air Regulatory Group, 573 U. S., at ___ (slip op., at 15) (internal quotation marks omitted). After reading Section 36B along with other related provisions in the Act, we cannot conclude that the phrase “an Exchange established by the State under [Section 18031]” is unambiguous. [9-10, 15]

The opinion concedes that section 36B is an example of "in artful drafting." But the rest of the statute, as the government and all of the lawsuit's critics have relentlessly argued, clears that right up. Congress did not mean for health insurance markets to work in some states and not work in others!

Reliance on context and structure in statutory interpretation is a “subtle business, calling for great wariness lest what professes to be mere rendering becomes creation and attempted interpretation of legislation becomes legislation itself.” Palmer v. Massachusetts, 308 U. S. 79, 83 (1939). For the reasons we have given, however, such reliance is appropriate in this case, and leads us to conclude that Section 36B allows tax credits for insurance purchased on any Exchange created under the Act. Those credits are necessary for the Federal Exchanges to function like their State Exchange counterparts, and to avoid the type of calamitous result that Congress plainly meant to avoid. [21]

Congress's intent is clear, the IRS rule offering subsidies for plans purchased on federally facilitated exchanges is precisely what the statute called for, the end. The only bite that Robert takes is one that says "the Act does not reflect the type of care and deliberation that one might expect of such significant legislation." Alright, fine, 10 demerits for the members of Congress who could've clarified that one phrase.