What does it mean to be white?: Dylann Roof, Rachel Dolezal and the ugly legacy of the Rhinelander case

94 years after a watershed case on race, we're still interrogating blackness. It's time to ask the same of whites 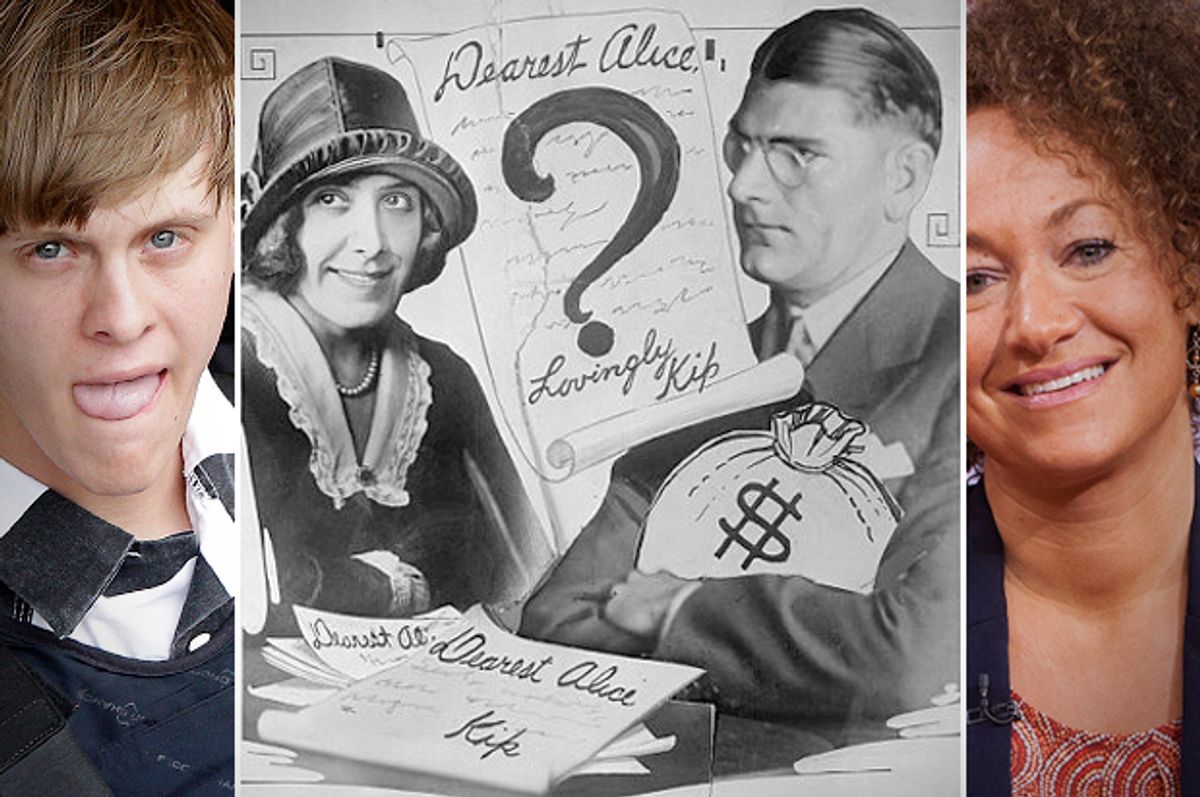 In 1921, Kip Rhinelander, the 21-year-old son of wealthy New York socialites, fell in love with Alice Jones, a domestic worker in New Rochelle, New York, and their closeted, three-year romance culminated in a secret marriage.  When news of the matrimony was leaked to the society pages of New York newspapers, reporters began to investigate Alice Jones’ lineage, and they discovered that she was part black.

In an attempt to annul the marriage, a complaint was filed against Alice Jones by Kip Rhinelander alleging deception, however, during the trial, Jones’ counsel argued that – given the length of their romantic courtship and marriage – Rhinelander had innumerable opportunities to observe telltale signs of Jones’ “blackness.”

In what was to become one of the most notorious and troubling parts of this widely publicized trial, Jones’ own attorney forced her to disrobe entirely before an audience of jurors, attorneys and the judge, who were invited to examine her seeking proof of her blackness.

The Rhinelander case is an illustration of the continuum of public humiliation and arrested agency of black bodies, originating in the voyeurism of the slave auction, then growing roots in the killing and banishment of black bodies during the Great Migration, and reaching maturation in our ahistorical relationship to race in our post-civil rights era.  The “spectacle” of race-based cases in the news -- the grand gesture of demarcating the meaning of blackness -- becomes a mechanism to affirm that there is no place, and no existing language, to debate the meaning of whiteness.  The Rhinelander case was not just an effort to “re-purify” the Rhinelander dynasty; it also served to warn others of the consequence of abandoning their designated place in the more consistently defined category of “blackness.”

The examples of this are not always as dramatic as the Rhinelander case, or the many recent high-profile police brutality cases. Rachel Dolezal, a scholar and NAACP chapter president (and hair stylist), made headline news when it was revealed that she is a white woman who, for the past several years, has been living as a black woman. When asked by MSNBC host Melissa Harris-Perry how assuming a black identity might be dismissive of the cumulative prejudices, invisibility and racism that black women encounter from the time they are little girls, Dolezal responded, “they don’t know me,” a retort that speaks emphatically to her power to live inside an individualized, un-racialized identity. This individual identity ignores the psychological, emotional and social “de-robing” that, over decades, results in black women sharing a collective historical identity. In other words, it is a luxury to assert the individualism implied in affirming that “they” do not know “me.” All marginalized groups know one thing for sure:  Everyone knows you, even before they know you.

Moreover, when asked by Melissa Harris-Perry about her hair, she did not talk about the perming that crinkled her straight hair into a mound of dirty blond ringlets.  Instead she talked about the importance of helping little black girls with short Afros to experience long flowing braids.  She says, “for a girl to smile for the first time, to [with a wave of her head] throw her braids,” made the black girl powerful, because she was liberated from “the trauma,” which is, presumably, the aforementioned short Afro.

In this statement, and in her adaptation of blackness-as-flowing-hair, Dolezal exemplifies what Alice Jones’ lawyers missed:  that as a white woman performing blackness, the category of whiteness is, at no point, under interrogation. In other words, while she has opened up the floodgates that raise the question:  “What is authentic blackness?” we are never directed back to Dolezal’s birthright -- to her identity of origin -- which would ask, instead, “What does it mean to be white?”

As the question of what whiteness means was brewing for me, I heard about the shooting of nine black parishioners in Emanuel African Methodist Episcopal Church in Charleston, South Carolina, an event that catapulted Dolezal out of the headlines and Dylann Roof into the news.  After sitting with parishioners for one hour, Dylann Roof went on a shooting rampage, claiming that black people “raped our women and are taking over the country.” What Roof knew, and what the rest of us now know, was that an attack on this 200-year-old institution that provided refuge for the enslaved, respite for the civil rights worker, and a vibrant community for generations of forward-thinking African-Americans, was the ultimate symbolic location for a statement in defense of Roof’s brand of whiteness.

Strangely, these dramatically divergent stories must occupy some shared space for me, because both speak to the dangerous availability of black bodies as a location to vent, dump, exorcise or exacerbate our pathological relationship to race as a nation.  Moreover, the black womanhood that Dolezal appropriates and that we deem newsworthy, much like the identity of the 200-year-old Emanuel AME Church, is framed within an unspoken but century-long national ambivalence -- not only what about space black bodies should occupy, but more important, what space black bodies should occupy in relation to whiteness.  Dylann Roof reacted to his perception that black bodies were gaining too much power by exercising the most deranged exemplar of white privilege.  Rachel Dolezal — as an artist depicting black life, then a white woman suing a black institution, then assuming a black identity, then courting white animus by falsifying racist complaints — flexed muscles that were strengthened by historical privilege. And in the end, black bodies remain the repository for the purging that happens as we continue to evade the question:  “What does it mean to be white?”

Here is an introduction to what it means:  When black families in mourning must pass under a Confederate flag waving over the South Carolina state building to offer their forgiveness to the terrorist who killed their loved ones; when the judge overseeing that case calls for compassion for the white relatives of the shooter; when a white woman can appropriate the identity of a historically disenfranchised group to deceitfully take advantage of the limited social, political and employment opportunities generally occupied by that group, then it seems our historical choice to leave the definition of “whiteness” unexamined has ongoing repercussions that range from devious to deadly.

The Charleston shooting -- like the banishment of black bodies in the Great Migration, like Alice Jones’ disrobing for white men in court, like Rachel Dolezal being outed for performing blackness -- are not part of a continuum of conversations about race, as they should be. Until we announce that whiteness needs to be named, probed, examined and defined, there are no dots being connected; there is no yesterday that produced today.

And, even worse, there are no lessons to carry into tomorrow.

Audrey Elisa Kerr is a writer and professor of African American literature at Southern Connecticut State University. Her book "The Paper Bag Principle: Class, Colorism and Rumor, and the Case of Black Washington, D.C." is due out in paperback this Fall.