You Must Hear This! Rhinoceros' "I Will Serenade You" 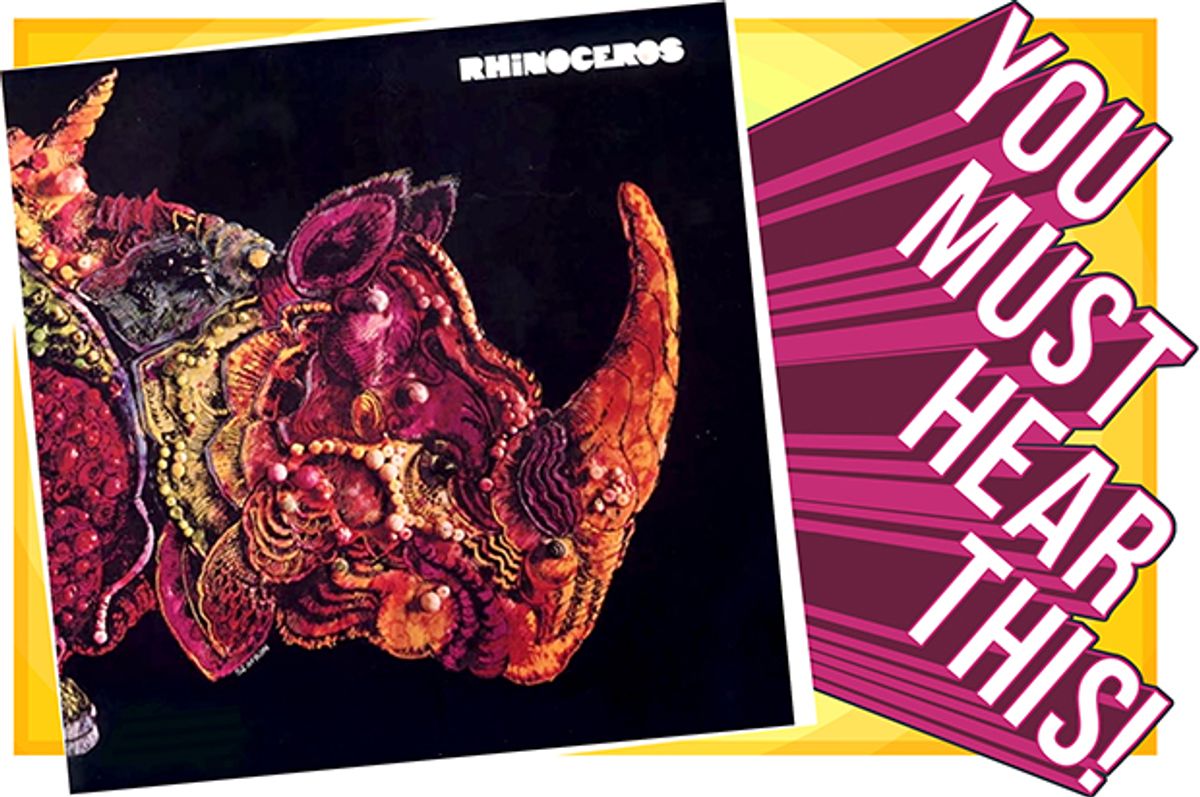 If you have read anything at all about the band Rhinoceros, you have likely learned the following:

1. They were heavy. Perhaps even the "Heaviest Band Of All Time." Hence the name. Here's a promo poster for their debut album: Now, I happen to think that the label's focus on the band's heaviness might have been a mistake. Sure, the band was loud and powerful and, yes, heavy... but they didn't lumber or churn. They were nimble and airy and soulful enough to take a song all the way down to its quiet essence. That said, Rhinoceros is a better band name than Antelope.

2. They were offered a slot at Woodstock, and their management turned it down.

Legend has it, their manager was on vacation when the offer came in, and the second-in-command had something of a Bill Buckner moment. When all was said and done, Sha Na Na wound up with the slot at Woodstock and Rhinoceros performed at an upstate New York high school prom. This all according to Nick Warburton's exhaustive, must-read bio of the band.

3. They were a "supergroup," meaning they were all established musicians before joining the band. Elektra reportedly even wanted the band name to be Supergroup, before they came to their senses and realized this was a terrible idea.

I got in touch with John Finley, one of the band's original singers, and we discussed the band's supergroup label, before digging into my favorite of their songs, "I Will Serenade You."

Our conversation has been edited for length and clarity.

Your voice doesn't sound the way I would have expected. I thought it was going to be a raspy, rock & roll voice.

One of the first things people always seem to mention about Rhinoceros is that it was a supergroup.

That was kind of the hype, I guess – the concept of putting together the best people you could find. Paul Rothchild and the label put the group together. They got Billy Mundi from the Mothers of Invention, Danny Weis and Jerry Penrod from Iron Butterfly, Doug Hastings, second guitarist, from Daily Flash in Seattle. Alan Gerber was a solo artist with a record out in Chicago, I was in a group that Paul had scouted called John and Lee & The Checkmates, with Michael Fonfara on keyboards – we were a Toronto group.

Did you guys have the problem that – as a cliché anyway – plagues supergroups, which is the clash of egos?

Not as much as... Blind Faith, or someone like that. There was some of that, but I think a lot of it was being young and stupid. We didn't understand the opportunity that was being extended to us. We just thought, "this is life, this is normal." And then we fought amongst ourselves, and there were factions in the group, a couple of real basic clashes in the group. Poor decisions were made, and you know – it's what kids do! When they don't know better.

Do you think there was any prejudice against the idea of a supergroup? As opposed to a group of kids who were friends all along organically creating their own band?

It sounds from the recordings like you guys were just a great live band.

In a way, I'm not surprised, because that's exactly what it sounds like, but it's still shocking that it didn't take overdubs and that you pulled it off!

The players were really good players. They knew music. And Paul was a great producer. And Paul knew how to get the most out of people. I remember one day, I guess it was from all the drugs I took, and I was a really sensitive guy, and my psyche was very... I don't know if temperamental is the word... I was, I would say, fragile at times. And one day, there were people in the studio, people on acid, and it affected me, and I just went paranoid. So, Paul just stopped the session. We went up to the top of Mulholland Drive, and we just sat there for a couple hours – he just said, "session's off until we get back." He took me up there and we talked for hours. We just talked about life, and by the time we were done, I felt great. He said, "you OK now?" I said, "yup." And we went back down, and in one take, we got "That Time Of The Year," and in two takes got "I Need Love."

Let's talk about "I Will Serenade You." Was it a hard song to write?

I remember I had this little ditty, this little melody, and I would sing and these words came out – the first two verses of "Serenade." So I'm sitting up in the house, and I've got these words, and I'm singing them to this pretty little song, this pretty little thing that was, eh... it was OK. And then, I stopped working on it, I started playing the piano. Just started playing this kind of R&B-ish kind of thing – a bluesy gospelly kind of thing. And then all of a sudden, something just went boop in my head and I started singing the words I'd been singing to this little other piece of music to these chords. And these chords were what became "I Will Serenade You."

So that left me no third verse. And I had to have a third verse, I thought. It didn't dawn on me that I could just vamp out and do it differently. Because I'm just starting out at songwriting – I'm a baby. So we got in the studio, and I had the first two verses, with choruses, and I had this little na na na na na bridge, but I had no words for the third verse. And I struggled and struggled and struggled, and Paul made a couple of suggestions. I sat in a room outside the studio and was trying to come up with words and it just wasn't working, and Paul came up with a little thing, he said, "how about doing this?" He didn't want credit, he just figured he was helping the artist. And then I went, "oh yeah, OK!" And so I went from there, and I wrote a couple of lines, and I said, "how about this" and he said, "yeah! OK, now let's go in and do the song."

I'm conflicted about the end of the song. On the one hand, I want it to build into a huge finish, with a gospel chorus and a horn section... and on the other hand I appreciate that it doesn't do that – that it does its thing and gets out in three and a half minutes, as a perfect little song. Was there ever any thought of a big finish?

Listen to Three Dog Night's version. What they did at the end, for the vamp – they had to have harmony in it! And they push it harder, at the end.

I think it does make sense to keep it more of an intimate performance. That's what really grabbed me right away about this song – you just want to be in the audience and hear the singer sing it to you.

It's a personal song. There are two things it means. One, it's a love song. And you could say that "serenade you" is a metaphor for "make love to you," or it could just be I want to serenade you because I love you. The other is that here I am onstage, and what my life adds up to is: I love to sing, and I love to sing for people. And I love to sing for you, and this is what I have to give to you.

John Finley currently divides his time between Toronto and Los Angeles, where he continues to write, record and perform music – soul, R&B and blues in the former; jazz and gospel in the latter.