Sorry, I can't stop laughing at the Justice's furious tantrum over this historic "judicial Putsch" 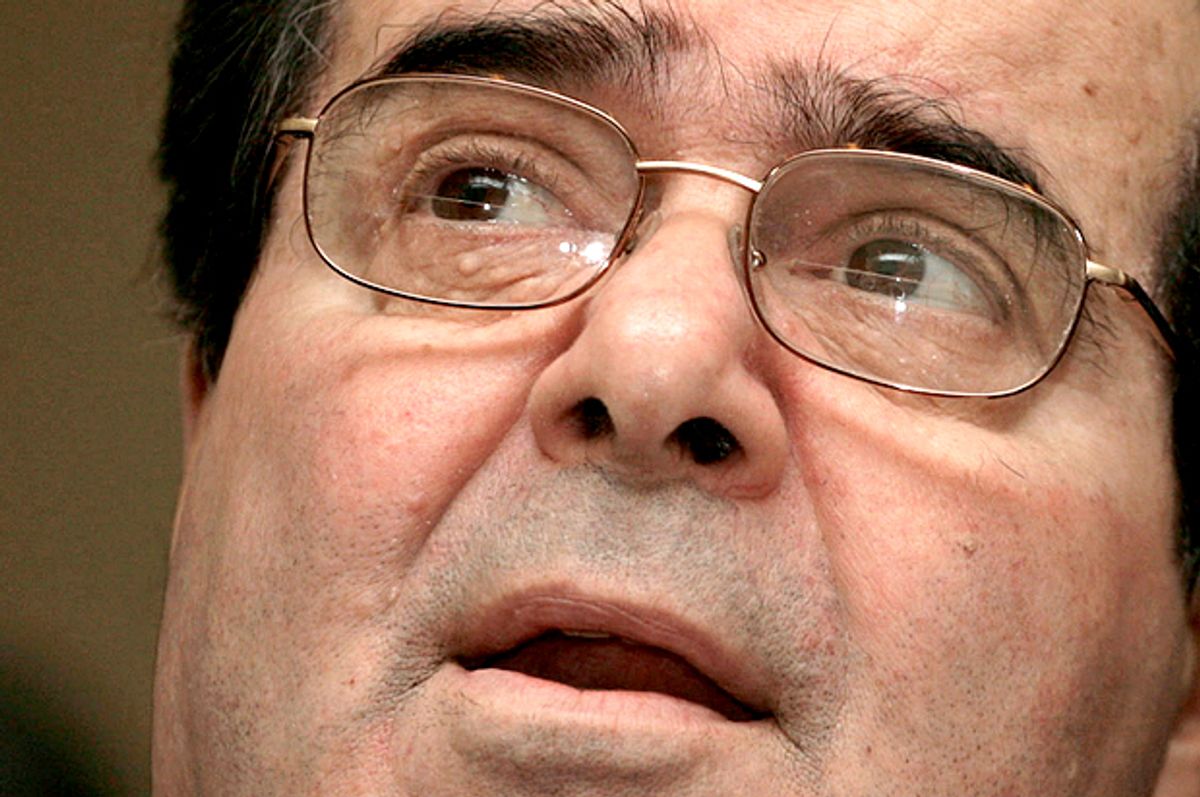 In a profoundly satisfying episode Friday, reliably sodomy-obsessed Justice Antonin Scalia had an outburst for the ages. Oh, and in related news, the United States Supreme Court ruled in the case of Obergefell v. Hodges, making marriage equality a constitutional right throughout the land.

It's entirely expected that Scalia, who has somehow managed to parlay a fixation on what homosexuals do in private into the defining aspect of one of the most important jobs an American can hold, would not take the ruling well. And oh boy did he not. But give the man credit, he can really weave one hell of a tapestry of word fury. Let's look more closely, shall we? Let the Scaliafreude commence!

Chief Justice John G. Roberts Jr., as well as Justices Clarence Thomas and Samuel Alito, all issued dissents to the Court decision too, and sure, there are nuggets of gold to be found in them too. Alito fumed that the decision "will be used to vilify Americans who are unwilling to assent to the new orthodoxy," fearing that "the Nation will experience bitter and lasting wounds." Thomas fretted over "potentially ruinous consequences for religious liberty." And Roberts passive aggressively told America to go out and "Celebrate the opportunity for a new expression of commitment to a partner. Celebrate the availability of new benefits. But do not celebrate the Constitution. It had nothing to do with it." Oh, it burns! It burrrrrrnnnnnns!

But it takes a man like Scalia — a man who famously tossed "state laws against bigamy, same-sex marriage, adult incest, prostitution, masturbation, adultery, fornication, bestiality, and obscenity" into the mix of "the impossibility of distinguishing homosexuality from other traditional 'morals'" in his enraged dissent of the decision that struck down anti-sodomy laws — to really go all in on an historic day such as this. Bringing his A game to the dissent, he started out nice and easy, explaining that "The law can recognize as marriage whatever sexual attachments and living arrangements it wishes, and can accord them favorable civil consequences, from tax treatment to rights of inheritance."

But there's just one thing — Justice Antonin Scalia ain't never ever do nothing nice and easy.

Soon, he went on to state that "When the Fourteenth Amendment was ratified in 1868, every State limited marriage to one man and one woman, and no one doubted the constitutionality of doing so." He declared, "That resolves these cases," firmly slapping the Constitution down on the table. He next fumed that "The [majority court] opinion is couched in a style that is as pretentious as its content is egotistic," adjusting the mudflaps on his pickup and popping open a Coors.

While busily stringing middle schooler-level cries of exasperation including but not limited to "Really?" "Huh?" and "What say?" he then played the diversity card. "Take, for example, this Court, which consists of only nine men and women, all of them successful lawyers who studied at Harvard or Yale Law School. Four of the nine are natives of New York City. Eight of them grew up in east- and west-coast States. Only one hails from the vast expanse in-between. Not a single Southwesterner or even, to tell the truth, a genuine Westerner (California does not count)," he said, shaking an angry fist at a map of the United States. "Not a single evangelical Christian (a group that comprises about one quarter of Americans), or even a Protestant of any denomination." Also not a single openly gay person, but whatevs.

Scalia then went on to sarcastically deploy the dreaded italics font to describe the other members of the Court. "These Justices know that limiting marriage to one man and one woman is contrary to reason; they know that an institution as old as government itself, and accepted by every nation in history until 15 years ago, cannot possibly be supported by anything other than ignorance or bigotry," he said, adding, "¯\_(ツ)_/¯."

Taking issue with the judicial concept of intimacy as a freedom, he drawled, "One would think Freedom of Intimacy is abridged rather than expanded by marriage. Ask the nearest hippie."

He then grumbled bitterly about those "those freedoms and entitlements that this Court really likes," poured a healthy two fingers of amber liquid into a Baccarat tumbler, gulped it down, and flung the glass into a roaring fireplace. Then for the real kicker, he tossed in a footnote that stated, "If, even as the price to be paid for a fifth vote, I ever joined an opinion for the Court that began: 'The Constitution promises liberty to all within its reach, a liberty that includes certain specific rights that allow persons, within a lawful realm, to define and express their identity,' I would hide my head in a bag. The Supreme Court of the United States has descended from the disciplined legal reasoning of John Marshall and Joseph Story to the mystical aphorisms of the fortune cookie."

And with that, he ordered America to get off his lawn, and hopped in a time machine back to a year when Paul Lynde was the center square on "Hollywood Squares." When asked for a response to Scalia's obvious distress, Judge Ruth Bader Ginsberg replied, "Haters gonna hate."

The far right's Friday freakout has been a thing of beauty, even for those of us who generally avoid hate watching. Bryan Fischer's 9/11 metaphor packed Twitter feed alone is worth microwaving a bag of Pop Secret for. But it's Scalia who has now truly made his mark in the annals of history with a career defining meltdown. This, Antonin Scalia, is your legacy. A tantrum. A petulant declaration of sore loserhood. It's what you'll be forever remembered for. How fitting. How perfect. And for all their sting, how useless and hollow, how hilariously pointless, this beautiful day, your angry words prove to be.