Gather around, screwed millennials: You must see this

There are no jobs. We deal with the quiet frustration of our recession's Lost Generation. A new movie gets it 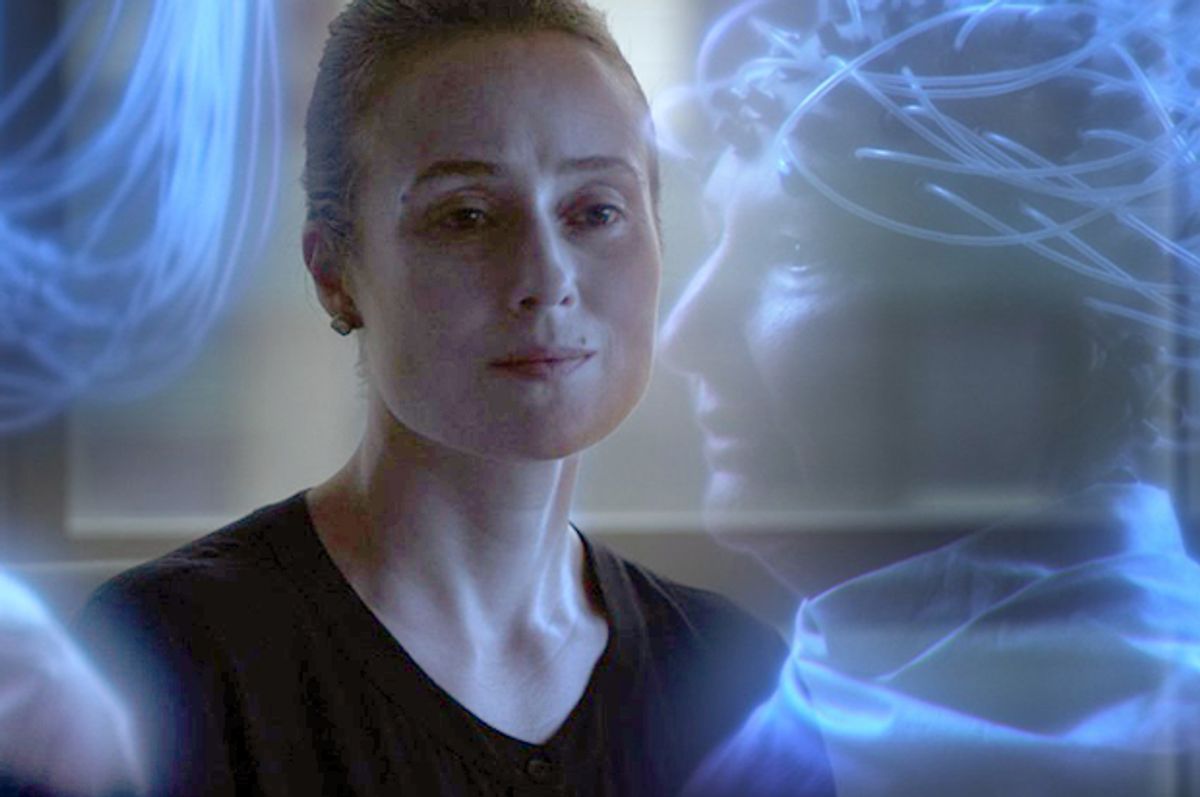 We live in a renaissance of science fiction film and TV and “geek” culture in general — the accelerating pace of technological change thanks to Moore’s Law makes it hard to deny we’re living in “the future,” we’re all part-machine-part-human for practical purposes now, no one can guess what element of science fiction is next to become science fact, blah blah blah.

You’ve heard that song and dance before. They use it to sell everything from splashy popcorn blockbusters with robot villains to artsy thinky indie dramas with robot antiheroes.

But "Advantageous" is the first science fiction film I’ve seen that really grasps something I think is core to the experience of us young people who are on the bleeding edge of the troubling trend of Machines Taking Our Jobs Away.

And the core theme of the film that makes it so important is also the one that I worry will scare a lot of its audience away. Because this is a science fiction film but not an action film — there’s no violence, no gunplay. There’s no heroes or villains, precious little of good-vs-evil conflict. There’s no pulsing electronic backbeat and even though there’s smartphones and holograms, there’s not that much visible technology, no one tapping madly at keyboards while incomprehensible lines of green text scroll down the monitor.

Which makes sense, actually. These are all things we imagined would happen in “the future” of the 2010s back in the 1980s. The fears that defined the genre we call “cyberpunk” that set the tone for dark, dystopian futures for a generation were 1980s fears — fears of street gang violence, fears of nuclear war, fears of the drug trade. An adult in the 1980s, imagining a member of my generation, imagined someone doing designer drugs at raves, casually gunning people down in the street and hacking into the mainframe to trick China into launching their ICBMs.

What "Advantageous" is that other science fiction films aren’t is quiet.

That’s my experience of being an unemployed millennial in the 2000s. Long stretches of unnerving silence. Being one of a handful of unlucky young people walking aimlessly around in the middle of the day when civilized people are at work. Failing to make eye contact with each other or speak because we’ve forgotten how to have in-person conversations. Turning to social media or aimless Web surfing to fill the long stretches of emptiness, of boredom.

And to a large extent that’s what "Advantageous" is about. Yes, the eerily empty streets our characters walk through might be a result of the film’s limited budget — but it also makes sense within the film’s setting. All the buildings are empty; all the stores are closed. Homeless people wander the parks and sleep in the bushes and stare numbly into the distance. (At one point the characters try to walk into a restaurant only to find that it’s been boarded up and the owner, sitting inside, ignores them. They treat this as a normal, everyday occurrence.)

We’re told that the world is in the grip of a tech-driven economic recession. There’s no jobs for anyone — anything the small elite of wealthy customers need done, they can get a machine to do for them better than any human can. Our protagonist, Gwen, is a spokesmodel for a cosmetics — essentially an eye-candy job.

Even though she mentions having gone to grad school and hoping to go into teaching, there’s no jobs out there for teachers now that people can get any information they want from machines. The only job out there for a flesh-and-blood human who’s not already rich is a job that involves looking pretty and smiling at rich people to try to sway their opinions, and it’s a job she’s lucky to get and devastated to lose.

(Every college-educated millennial who’s ended up taking a position in sales because it was the only thing on offer ought to be feeling a familiar twinge right now.)

The film gets a lot of mileage out of taking all-too-familiar scenes from the 2009 recession and exaggerating them just enough to make them fully dystopian. Anyone who’s dealt with the infuriating process of being forced to apply for jobs through poorly-designed automated Web forms will feel Gwen’s pain as she argues with a recruiter telling her her résumé has been “red flagged” and she slowly realizes, as the recruiter’s voice on the phone devolves into ELIZA-like nonsense responses, that she can’t get a job because she's talking to a poorly-programmed machine that’s taken someone else’s job.

Anyone who’s felt the intense pressure of the college-application arms race will sigh at Gwen’s daughter, Jules — who appears to be 11 or 12 but talks, reads and writes at the college level — calmly telling her mother about a journal article she read describing how her generation’s high-pressure lifestyle means she’s likely to become infertile by her 20s.

It sounds like an exaggeration, if you personally haven’t witnessed a Facebook feed filled with top-ranked students from top-ranked schools with thousands of dollars of student loan debt clawing and trampling each other to get minimum-wage call center work.

And Gwen’s response to the impossible situation of trying to secure a future for her daughter when she doesn’t even have an income anymore isn’t to pick up a gun and start shooting anyone. The long scenes of her sitting in brooding silence while racking her brains for a solution are, in fact, punctuated by explosions going off in the far distance, part of a hopeless war against the government by unnamed “rebel forces” — but those explosions are oddly silent, oddly peaceful, and they never feel completely real.

It feels like the warlike shouting and chanting from Zuccotti Park that most of us sat at home and watched on TV — a revolution I now feel happened mainly because our generation felt the essential frustration, the essential wrongness of the actual soundtrack of the recession, an eerie passive silence, and some of us tried to force some noise into the silence just to fill it up.

But it didn’t work, because there was no victory condition, no enemy to defeat, no Death Star to blow up. In retrospect the protests feel as futile as the quiet clouds of smoke in the "Advantageous" skyline. You can’t blow up an entire world, an entire economic system; you can’t beg it for mercy or shout moral imprecations at it either. Break things, throw things, scream things — at the end of the day you still don’t have a job.

I think on some level we’ve always understood this. I think on some level we’re silent because the damage done to us was done through silence — no one beat us up or assaulted us or stole anything from us. All that happened was the phone didn’t ring, the email never came, the poorly designed Web form spat out an automated “You will be contacted shortly” that was a lie.

"Advantageous" is a quiet film, and a pretty one. The city Gwen and Jules’ cramped apartment exists in is gorgeous and clean. When we do hear music, it’s not pulsing techno or anarchic punk but a street musician plying his trade, playing beautiful classical pieces on the violin — perhaps he got a degree from Juilliard only to end up as destitute as Gwen.

The gritty slums of the cyberpunk milieu purported to be about a world where technology was grinding down humanity but what they really showed was a world where humans could still strike back at things — could graffiti the walls, shatter the windows, shoot pockmarks into billboards, and the property owners couldn’t keep up with the damage. Vandalism is, at the very least, a sign of human activity — a sign that someone out there is still doing something.

The eerie Disney cleanness of Gwen’s city’s streets — the way the damage caused by the rebel bombings causes no one any concern and is seemingly fully repaired overnight — is a sign of a world where the things have won and the people have given up.

That, for me, was the worst thing about the recession — seeing shiny storefronts and clean-swept streets and all the trappings of a thriving economy — but none of us participating in it. The recovery from our recession was a so-called “jobless recovery” — still plenty of stuff being made, still plenty of money, in the hands of increasingly few people, to buy things with. The economy of things is doing fine, and always has been. It’s only the economy of people that collapsed.

There are other themes in "Advantageous." It’s mentioned that women have borne the brunt of this recession because, a suited executive bluntly tells Gwen, people fear the social disruptions frustrated men might cause more than they fear frustrated women —something that rings eerily true in the past few years, where a handful of men who feel left behind by the modern world are increasingly willing to channel their grievances into extremist ideologies and trying to puncture our generation’s silence with escalating acts of violence.

Gwen, a highly intelligent woman who’s been reduced to making a living solely off her looks, is being replaced by her employer because they want a younger and more “universal” look for their brand. Gwen is portrayed by Jacqueline Kim, an Asian-American actress who turned 50 this year and who co-wrote the script for "Advantageous" — it’s hard not to see this plot point as reflecting Kim’s real career.

And then there’s the climactic decision Gwen must make, whether to take advantage of a “cosmetic procedure” that involves uploading her mind into a more youthful, racially-ambiguous body. While it’s far from a unique conceit, in the context of this film the idea of reducing people, especially women, into commodities, where technology makes our identity mutable and economics makes it negotiable, takes on extra resonance.

We live in a world where cheap and plentiful technology has made us cheap — the market for human labor is glutted. There’s too many of us out there, we’re too easily replaceable, almost none of us are specifically needed for anything. As a result, just to survive — just to avoid being irrelevant — we give away more of ourselves than we have in generations, selling our time, our privacy, our rights just for a chance not to be left behind.

How much further will it go, "Advantageous" asks. How much less needed can people get, as the things get smarter and shinier and more efficient? How much more will you have to give away, if they ask you to — your body? Your mind? Your soul?

The film doesn’t give any easy answers. But that’s the question we all need to be asking.