Bristol Palin's pregnancy announcement is her coming out 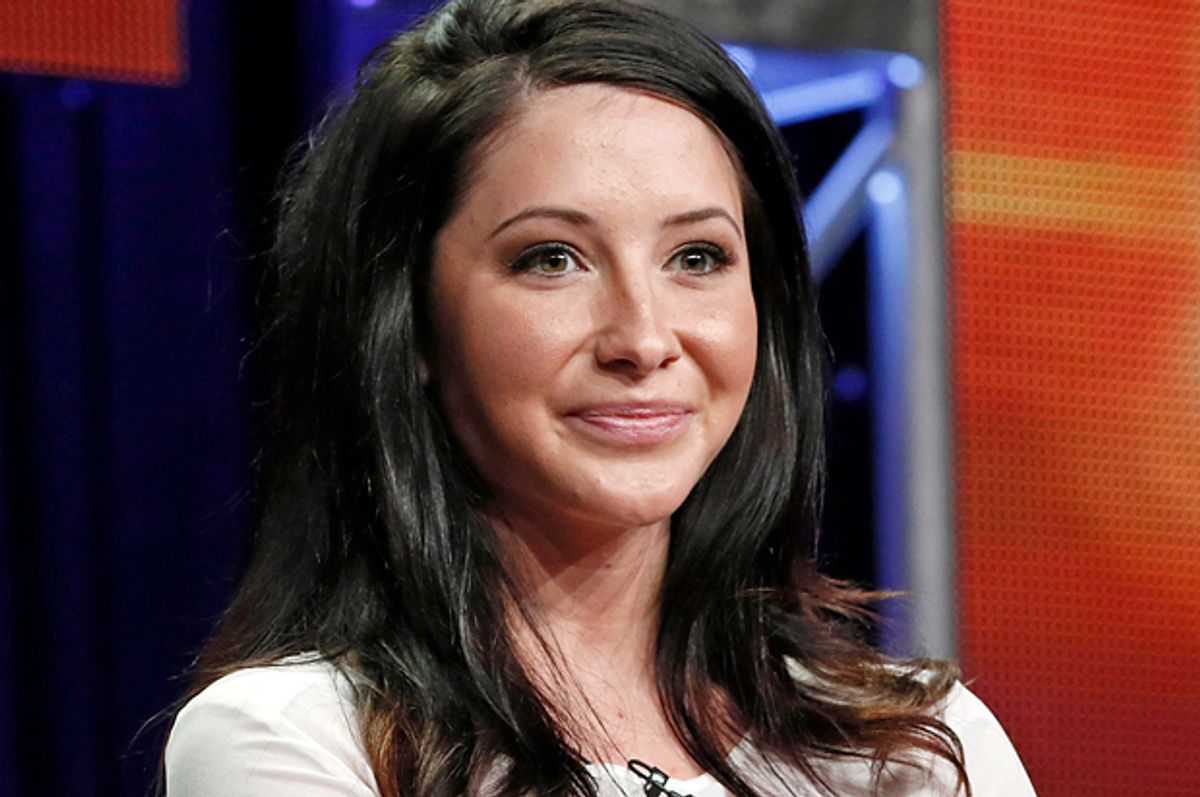 On her blog Thursday, the 24 year-old "Dancing with the Stars" veteran, single mother and world's least successful spokesperson for abstinence announced that she is pregnant. In her post, Palin — whose engagement to Medal of Honor recipient Dakota Meyer was abruptly called off last month less than a week before the day — cryptically stated that "I’m announcing this news a lot sooner than I ever expected due to the constant trolls who have nothing better to talk about!!!" Palin does not say how far along she is, nor does she sound especially psyched about this new development. "Honestly, I’ve been trying my hardest to keep my chin up on this one," she writes. "At the end of the day there’s nothing I can’t do with God by my side, and I know I am fully capable of handling anything that is put in front of me with dignity and grace. Life moves on no matter what. So no matter how you feel, you get up, get dressed, show up, and never give up. When life gets tough, there is no other option but to get tougher. I know this has been, and will be, a huge disappointment to my family, to my close friends, and to many of you….Tripp, this new baby, and I will all be fine, because God is merciful."

It would be extraordinarily easy here to note that Candies really did not get their roughly one quarter of a million bucks worth of bang — so to speak — out of their ambassador for teen pregnancy prevention here. And it's pretty obvious that the young woman who has built her public persona as an abstinence advocate, a woman who once said that "There may be multiple forms of contraception, but I’m here to say that one fact remains. Those that practice abstinence have no chance of becoming pregnant," has not been doing what she preaches — again. (Her son Tripp was born in December of 2008, when she was 18.) And there is a certain rich irony in someone who recently declared, regarding the Duggars, that Lena Dunham "makes me want to puke" because "Liberals in today’s media can do no wrong, while conservatives can do no right" suddenly asking not to be lectured. This is a lady who just earlier this month went on a tear about Miley Cyrus, saying, "Thanks for giving us the best example of what 'tolerance' looks like in Hollywood: it looks a lot like contempt," and groused of Caitlyn Jenner that "Being gay/transgender makes you a hero," adding tellingly, "We have way too many hypocrites." All of this, while she all but certainly must already have known she was pregnant. So I confess that my first thought when I heard the news was to think back a few days to the words of Palin's mother Sarah — "I’m sorry. I shouldn’t laugh … this hard."

But then, because I sincerely am trying to be one of those tolerant liberals the Palin family reviles so very much, I took a step back. I tried to look at Bristol Palin not just as someone who has been paid money to call abstinence "a realistic goal for myself," one who did a PSA vowing she would not hook up before marriage "For real for real for real. Trust me, I'm not getting myself into another situation." Because while I could look at her life and decide that's she is now as effective a spokesperson for abstinence as Lindsay Lohan is for safe driving, what I want to hope for now is not to be another Lindsay, but to be another Caitlyn.

Bristol Palin is a grown-up, 24 year-old woman. And right now, she's living with the consequences of her choices with what appears to be an unfortunate degree of remorse. Yet I believe everyone should be able to define themselves as something better than "a disappointment." Palin now has an opportunity to speak out with honesty about her experience and the obvious shortcomings of her own abstinence stance. And while she's recently been publicly dismissive of Caitlyn Jenner and the way the Olympic star has been embraced as a "hero," if she's asking for tolerance, she needs to look at her and learn from her.

It doesn't have to brand you for life to struggle with who you're expected to be and what you really want. You're not a bad person for not being able to take your own advice. The only moral failure now would be to to continue to judge others while asking not to be judged yourself. The true disappointment would be to not grow as an adult. At the age of 65, Caitlyn Jenner showed that it is never too late to live your truth. And in admitting that she's pregnant, again, Bristol Palin is now staging her own kind of coming out. Whatever went down with her broken engagement, the fact that she's now pregnant says that she's a sexually active human living on this planet. What she will be known for next depends on how she moves forward, either as a force for realistic conversation about sex and pregnancy, or as a stalwart self-defined disappointment to a movement that is fueled by religious fear and the very "hypocrisy" she rails against. My wish for her is that she considers the words of Jenner, who in her Vanity Fair story said, "This is about your life. Bruce always had to tell a lie. He was always living that lie. Every day he always had a secret from morning till night. Caitlyn doesn’t have any secrets." The secrets and the shame are what bring us down. And the truth is what liberates us, all of us — the athletes and the abstinence advocates alike.