The victory I never thought I'd see: How the Supreme Court just saved young gay lives

As I grappled with my identity 10 years ago, I couldn't have imagined this day. It didn't come a moment too soon 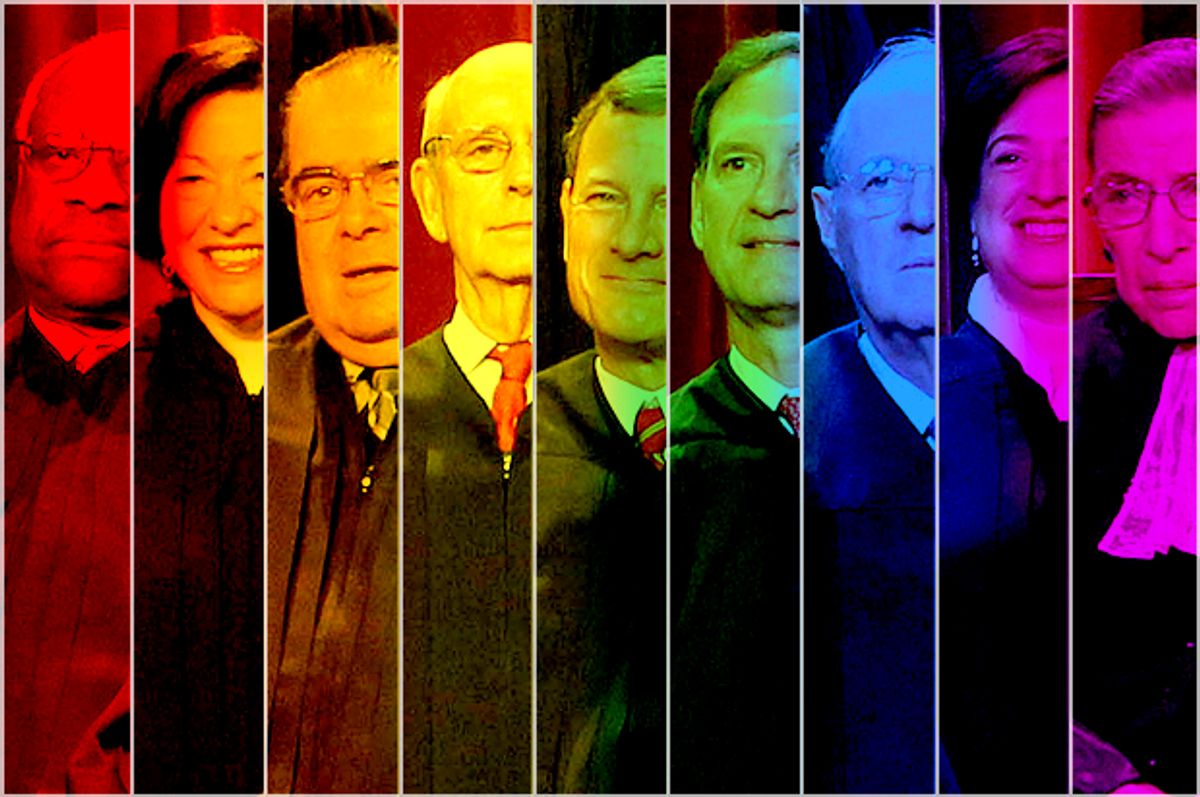 Growing up in Topeka, Kansas, the city home to Fred Phelps’s Westboro Baptist Church and its hateful (if cartoonish) anti-gay protests, my first notion of what it meant to be gay was to be an object of social scorn, the target of venomous epithets and visceral expressions of disgust. To be gay meant living a life on society’s margins, denied the fruits of legal equality and social dignity that straight people took for granted. Coming out as gay meant marking oneself as a freak, a defective model. It was a life of which I wanted no part.

To be sure, I always knew that Westboro’s brand of bigotry set it apart. Topeka reviled the church, with the city’s more cosmopolitan-minded denizens viewing Westboro as a source of national embarrassment, ammunition for those who castigated Kansas a state of Bible-thumping, evolution-denying, intolerant bumpkins. More conservative residents disliked the church’s vulgarity, and were particularly offended when Westboro began protesting military funerals.

From the moment I understood precisely what Westboro was protesting, my parents made clear that it wasn’t merely the tone of Westboro’s protests that was objectionable; it was the entire anti-gay message. Theirs was far from a universal view, however; for many Topekans, the worst thing about Westboro was its doctrine that God hates both sin and sinner. Like Jerry Falwell -- that beacon of enlightenment and tolerance -- they did not view gays as lost causes; gay people simply had to get right with God and renounce their sinful lifestyle.

As the child of two socially liberal parents, I bought into such thinking, even when it was conveyed not infrequently by one or two instructors at my Catholic school. But even if I never accepted the claptrap, I did internalize it. In those not-so-distant days, today’s Supreme Court ruling affirming same-sex marriage -- and by extension, the equal dignity and worth of gay citizens -- was utterly unthinkable.

By late 2003, the year I turned 13, I knew that I was attracted to other males, but despite the gift of knowing my parents’ love for me would only have grown deeper if I came out, I determined that I would not let my secret out. To proclaim the truth of my sexual orientation would have been foolhardy; at the time, I was convinced I would one day embark on a political career, and coming out would surely have foreclosed that option. I needn’t have looked any further than the contemporary political landscape. In the months after I realized my attraction to men, Massachusetts legalized same-sex nuptials and San Francisco Mayor Gavin Newsom ushered in gay marriage in his city; those developments were anomalous, and from where I sat, Massachusetts and San Francisco seemed a world away. The larger picture was far more dispiriting: President George W. Bush began a concerted push for a constitutional amendment banning same-sex marriage; New Jersey Governor Jim McGreevey resigned from office as he came out as gay; and Bush was propelled to re-election in part thanks to a surge in conservative turnout in states where anti-gay marriage referendums were placed on the ballot.

A few months after Bush's triumph, Kansas voted on its own marriage amendment; I still remember the piercing feeling in my heart when parishioners prayed for its passage during intentions at Mass. The amendment passed with 70 percent of the vote. Their prayers were answered; my conviction that I’d have to suppress my identity if I wanted to belong was reaffirmed.

As time passed, I was unsure how much longer I could keep up the act. But the longer I did, the more I convinced myself I could pull it off. Such is life in the closet: Managing to perpetuate the lie, no matter its cost to the depth of your personal relationships or your own mental well-being, is what passes for success. I didn’t like going on this way, but neither did I like the thought of being subject to social and political opprobrium. There were moments in which I contemplated coming out: in early 2009, after feeling deeply moved by Sean Penn’s performance in “Milk”; and later that year, as I set out for the University of Kansas, where campus liberalism and a new social milieu would, in theory, make it all the easier to introduce myself as a gay man. But each time I came close to a full and honest accounting of who I was, I backed out. Bogged down with coursework and focused intensively on making myself an attractive grad school applicant, I told myself I was too busy to even begin a serious relationship; if that ever changed, the inevitably tedious coming-out conversations could wait. Reminding myself that I’d enjoyed my handful of experiences with women -- even if only men ever caught my eye at parties -- I wondered if I just hadn’t met the right woman yet. I cringe at that thoroughly cliche thought now, but looking back, it seems only marginally more absurd than any other excuse I provided myself.

The act ended in the spring of 2012, a few months after my 21st birthday. I was leaving Kansas to begin a graduate program at the University of Chicago; in the more liberal environs of the Windy City, I imagined I could lead a more thriving gay existence. I’d also met someone; I saw little other choice, then, other than being up-front with my family and friends. The conversations went as predicted. My parents and siblings embraced me; my friends were stalwart in their support. Letting go of a nearly decade-long secret strengthened my relationships in a way I had not envisioned.

I say that what spurred my coming out was that I’d met someone; that was, indeed, the proximate cause of my big gay reveal. If I’m to be completely honest, however, I must admit that I also took account of the country’s cultural and political sea change on gay rights. In 2004, as I first grappled with my sexuality, 60 percent of Americans told the Pew Research Center they opposed same-sex marriage; a mere 31 percent favored equal marriage. By 2012, more Americans told Pew they backed marriage equality (48 percent) than opposed it (43 percent). The trend lines were unmistakeable.

This is not to say that I spent nearly 10 years just waiting for the polling to align with gay equality. For one thing, even when it became obvious, well before 2012, that opposition to gay marriage was headed in the same direction as the erstwhile opposition to interracial unions , I wasn’t sure I’d muster the courage to come out even when a majority of Americans saw people like me as deserving of full legal equality. The burden of carrying my secret had grown excruciating; once I’d met someone, it became untenable. But in the final analysis, I believe I felt liberated to even pursue a gay relationship because I could see, more clearly than at any time in my life, that I would be able to lead an honest and open life without permanent consignment to second-class status.

I’ve often wished I’d had the courage to come out before it felt safe. Doing so would have spared me years of  unnecessary angst; it’s not as if I ever worried whether my family and closest friends would still love me. Moreover, my early fears that coming out would hinder my career proved wholly unfounded; had I not come out, I certainly would never have even applied for my first job out of grad school, in which I wrote about LGBT issues. To the extent that I’ve experienced any bigotry as an openly gay man, it’s been in the often-subliterate attacks from social media trolls and hate-mailers. There was a time that some Twitter whack-job with an egg avatar and bald-eagle cover photo could send my blood pressure skyrocketing by calling me a fag, a punk, a pillow-biter. Now I mostly see such people as sad figures, increasingly unable to recognize a country in which their homophobia once reigned supreme.

Having spent the past three years in Chicago, Washington, and New York, it’s hardly surprising that my only regret about coming out is that I didn’t do it sooner. To live as a white gay man in a culturally liberal city is not exactly a hardship. How can I bemoan the occasional epithet-laden email when trans women of color face disproportionate rates of violence? Or when millions of gay Americans live in states -- including my native Kansas -- where it’s perfectly legal for your boss to fire you because of your sexual orientation?

These are injustices that today’s Supreme Court ruling -- historical watershed that it is -- will not redress. As the country has moved inexorably toward this day, I have worried that the arrival of nationwide marriage equality will be seen as the endpoint of the gay rights struggle, to the detriment of efforts to combat employment discrimination, hate crimes, and the manifold forms of systemic bias.

But while my excitement is tempered by that anxiety, I revel in this magnificent victory. The full inclusion of gay people in one of the seminal institutions of American life matters for more than just the gay couples who will avail themselves of the benefits of marriage. The Court’s ruling conveys that gays are deserving of full participation in our civic life, in all its forms.

I can’t help but think that in Topeka and countless places like it, a young person wrestling with questions of identity and belonging is taking note.