"What’s my purpose on Earth if I’m not playing solos?": Guitar hero Richard Thompson says every song absolutely, without question, needs one 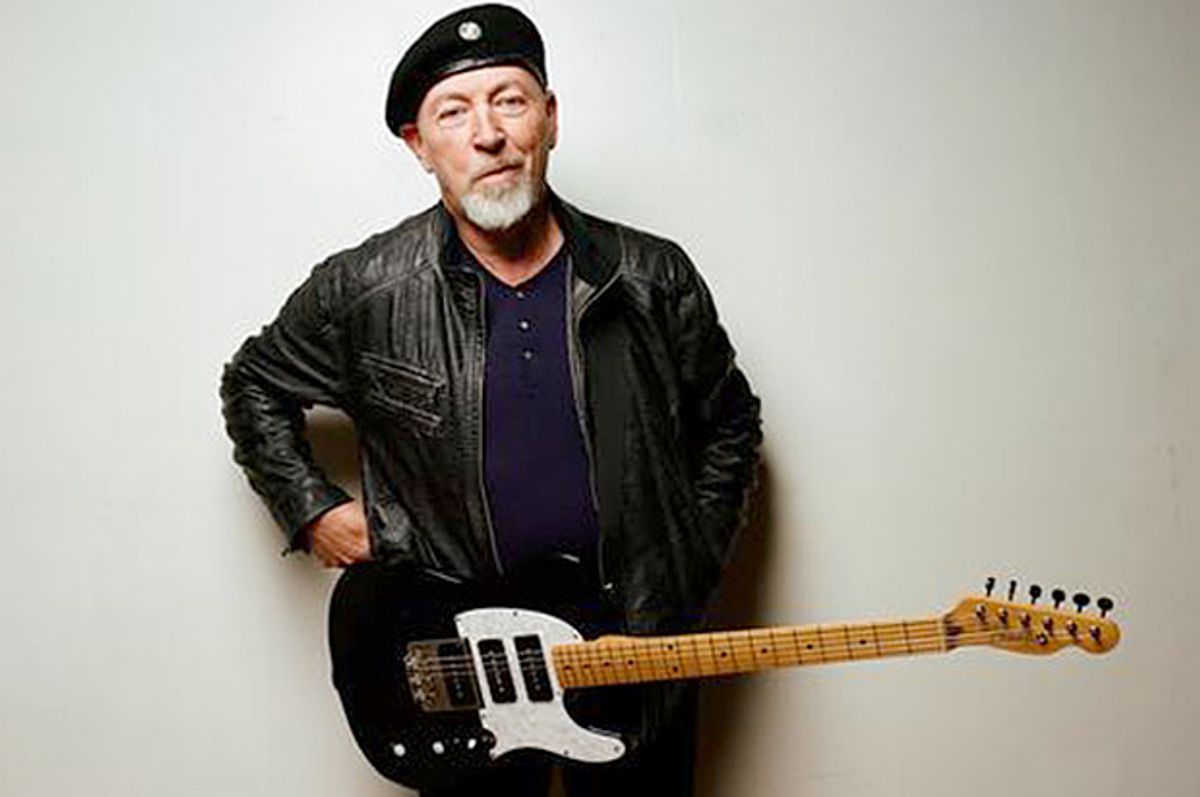 From the ‘60s English folk-rock band Fairport Convention, he moved into a duo with his wife Linda in the ‘70s; they broke up after the titanic record "Shoot Out the Lights.” He’s been a solo artist since, and become one of the masters of the dark love song.

We spoke to Thompson on the eve of the release of "Still," his latest, Jeff Tweedy-produced album. He was preparing to head to Mass MOCA for the Solid Sound festival, which is curated by Wilco.

You worked with Jeff Tweedy on this record. Why did you turn to him and what do you think he brought to the album?

He’s a person with the right kind of musical integrity. He’s someone who has the knowledge of the history of music and has always reflected that in his bands and in his writing. Between his approach and mine, there’s a kind of overlap. It’s not quite the same thing; it’s a little different. So us working together is a slight stretch, which I think is a good idea. I really like his record with Mavis Staples. I thought if he could do this with Mavis Staples, he could do this for me as well.

Did he push you in any direction? To what extent is Jeff’s stamp on this album?

It’s probably subtle. He places the artist front and center of the project, which is a good thing. He didn’t do too much with the songs. He accepted the songs as they were, pretty much. We probably tweaked the forms a little bit, last verses or something. He might of changed the feel of some things in terms of the way we rehearsed the songs. One of the best things he did was suggesting other musicians. I went in with my trio and Jeff suggested bringing in Jim Elkington from the band Tweedy. I thought that was a master stroke. He’s Jeff's English guitar player and he really got into my style really quickly to act as my second guitar player. That was great. The singers we brought in, Liam and Sima Cunningham, also from Tweedy, were terrific. They really sang a sympathetic harmony that didn’t sound American. They blended to my voice really well and got my style very quickly.

You and Jeff both have a long time of American country music. What brought you to country music back in ‘60s London -- in the days before "Sweetheart of the Rodeo" — and what kind of imprint did it make on what you were doing then and what you do now?

I don’t think anyone really heard country music in the UK [back then]. You got the Johnny Cash records, but there was so much I never heard of. I mean, I never heard Hank Williams until the bass drummer of Fairport brought home a Hank Williams record. I was like, “This is great. It’s quite bluesy. It’s got a real grip to it.”

There was one record shop in London that sold country records. We investigated that and found Dolly Parton, Hank Williams and all kinds of interesting stuff. This is just before “Sweetheart of the Rodeo.” When that came along, a few more doors were opened. What we did with the Byrds the year that came out, the year they had Gram Parsons in the band — that was nice.

You played at least one Gene Clark song with Fairport, “Tried So Hard.”

Yes. It was that real kind of Gene Clark country music, which is a wonderful and unique interpretation of country.

Do you think that country music, guitar playing made a long term impact on you? Is what you are doing now coming out of country at all? Country and Celtic music are cousins in a sense.

Well, they are. I listened maybe more to pedal steel playing than anything else, trying to get that sound on the guitar. James Burton had been doing that as well. Country music melodically is the same the style as Scottish music. There’s no difference whatsoever. It’s all very close.

How do you see the guitar solo fitting into the song? Does every song need a guitar solo? Does the solo need to have an emotional connection to the song?

Does every song need a guitar solo? Absolutely. Without question. What’s my purpose on Earth if I’m not playing solos? I like to think of songs as a package where I can display my skills or lack of skills. I can sing, I can write the song and I can continue the narrative of the song in the guitar solos. Whatever the emotion is, I should be showing it in the solos. I really like it as all one thing. I don’t really like playing the guitar just to show off. I like it to have a purpose.

So the solo continues the narrative of the song without words?

Yes. It should convey a similar emotion and possibly amplify that. It should do something that isn’t the same thing. It’s not just me playing some notes to show off.

The song “Where is Your Heart” is a dark, groove-driven song. It’s a ballad, but it’s not intricate and complex the way a lot of your ballads are. It’s very powerful. Tell us a little about that song and how it came about?

I think it’s somewhere between Celtic and Al Green, really. I love Al Green. I wanted to do something a bit like that, but coming from my own sensibility. So that particular song probably lands in that territory. It has a heartbeat groove to it and the bass drum does a heartbeat thing.

Another song that stands out on the record is “Guitar Hero.” I think it’s the last song on there. For an American listener, it’s hard to think about how important The Shadows were in the pre-Beatles period.

They were huge. They are probably the reason a lot of kids picked up the guitar. Probably in my case that was the thing. It wasn’t Scotty Moore. It was Hank Marvin. The Shadows made really good, well-crafted records. They were actually pretty good musicians. Their records today sound unbelievable. They are so well-recorded.

That kind of instrumental music is very appealing to teenage boys. It inspired hundreds or possibly thousands of groups all over Britain and subsequently all over the world to do the same thing. As soon as the Beatles came along it became very unfashionable. It was more square because they weren’t really playing the blues. Hank was really a melodic player.

One of your first bands was a Shadows cover band, right?

It was. When I was 11, I got together with three or four other kids and every Sunday we would ritually play Shadows numbers. Anything we could find. That was our Sundays. Every Sunday afternoon for a couple of years. I think eventually we got to play live and our first gig was so bizarre it broke the band up.

I think we started playing in ‘60. Our first gig was in ‘62. That was it. Then I moved onto a different band at my school. I was in a band with Hugh Cornwell, who was in the Stranglers.

Was it the Shadows that made you pick up the guitar?

Chronologically, the Shadows were the inspiration to pick up the guitar. But I had grown up with my father’s record collection, which contained Les Paul and Django Reinhardt. My father was not a very good guitar player, but he had those records which were just great to listen to. Having picked up guitar from the Shadows, I was able to start thinking about Les Paul and Django Reinhardt. But putting them into context and realizing that they weren’t just my parents’ music, that they were something that I shouldn’t outright reject —there was something pretty amazing happening there. Chuck Berry was a little bit later. We didn’t hear Chuck Berry records until ‘62 or ‘63.

So that stuff wasn’t big in the UK?

I think “Memphis, Tennessee” was the first Chuck Berry record to appear in the UK. About ‘63.

Because the Beatles were in Liverpool they were getting this stuff quicker than people in London.

Yeah. The first time we really heard R&B records were cover versions by Liverpool bands and to some extent the Rolling Stones. All that stuff was imported.

What are you listening to and what are you messing around with on the guitar these days?

I haven’t seen the Brian Wilson film yet. A lot of people who don’t usually like that kind of thing, musical biopics, like it. So I’m looking forward to seeing it. I tend to listen more to other instruments that guitar players these days. If I’m looking to stretch technique I tend to listen to piano players or something like that. I look at classical guitar too.

I like Sharon Isbin; I think she’s fantastic. She’s a really great player. Probably my favorite classical player of all time is Ida Presti. I listen to classical music to see if I can get those ideas onto a guitar. Often I’m just exploring on my own, trying out different tunings to see what works. Often I come up with an idea for a song and I think how can I accompany this song. Sometimes there’s such an inspiration for finding a new technique, to play that particular song. I have to find a tuning to play this song in. How can I sing it? How can I play it on guitar?

Do you still do a lot of songs in alternate tunings?

On electric you are playing Strat mostly these days?

I play Strat or things like that. They are all made of bits and pieces. So the pickups aren’t Fender necessarily. Sometimes the bodies aren’t either, but they are Fender-looking guitars.

Are you dragging out any of your old music when you perform?

A couple things. We are playing “Genesis Hall” sometimes. That goes way back. Sometimes I do “She Moves Through the Fair.” Very occasionally I do “Meet on the Ledge” as a kind of solo thing.

That’s a song you hadn’t done for some time.

I don’t do it very often because I think it’s slightly immature as a song. But it’s become very popular, particularly in Europe. They sing it every year at the Fairport [Convention] festival. It’s a big closing song. I have to think of it in that way and a way to interpret it so many years after I wrote it.

You are not dragging “Sloth” out and playing it with Nels Cline yet?

I’m trying to think if that was something we did last year. We played some old Fairport songs, which was kind of bizarre and strange. I’m trying to remember if “Sloth” was one of them.

You have a new drummer on this record, Michael Jerome. What’s it like to play with a drummer who is that tall and has that much flexibility in every way? Does he change the way you shape a song?

I think he has. I’m the shortest person in my band. I’m 6’2. Our bass player is 6’4. Michael is 6’4. It’s ridiculous. I feel like a shrimp sometimes. Michael is a very interesting drummer. He’s very flexible and has a tremendous sense of swing in everything he plays. He has great feel, proportion. I love playing with him. It’s a treat for me to be out on the road with him. It’s a treat to have him in the studio.