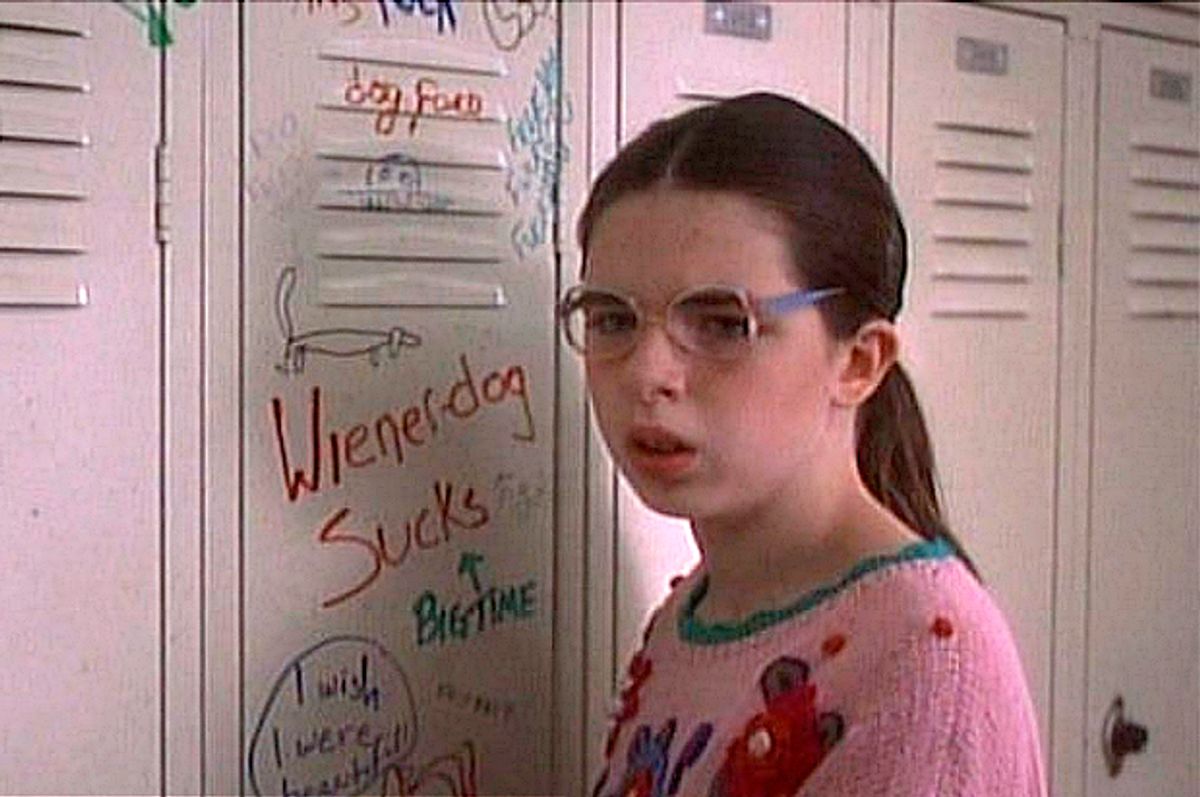 Heather Matarazzo in "Welcome to the Dollhouse"
--

Nearly every week it seems, brings us news of a sequels we don’t want to see, including sequels of good or great movies – “Blade Runner,” for example – that are likely to destroy the shimmer around the original.

The latest bad idea is the Tom Cruise-shoots-drones “Top Gun” sequel that seems to be moving forward. Cruise can be quite a good actor, and the first movie was fun at times.

But it’s hard to figure out how the Cold War jingoism and macho nonsense of the original movie can be translated into the 21st century without looking ridiculous. We’ve seen where that blind worship of American military power led us, and we – and the rest of the world -- are still paying the price.

So the idea of a sequel-of-sorts to “Welcome to the Dollhouse” – which has just started shooting -- strikes us as a much better idea. The original was not the very best of the ‘90s indie film movement, but it was a gutsy and original film, one of the truest movies ever about childhood, and the debut of nerd-genius director Todd Solondz, who went on to make “Happiness,” “Storytelling,” and a handful of others.

The movie is about a misfit seventh-grade girl whose life at school and with an annoying suburban family is somewhere between hellish and funny. “Dollhouse,” which came out in 1996 and was a hit at Sundance, was equal parts engaging and uncomfortable: In his original review Roger Ebert said the movie “remembers with brutal and unforgiving accuracy the hell of junior high school. Many movies reconstruct those years as a sort of adolescent paradise; it's a shock, watching this film, to remember how cruel kids can be to one another, and how deeply the wounds cut.” And at the same time, he wrote, it was a “funny, intensely entertaining film.”

Here’s what we know, from Variety, about the sequel:

The film is a follow-up to Solondz’s 1996 drama “Welcome to the Dollhouse,” in which the main character, Dawn Wiener — played by Heather Matarazzo — was teased with the nickname “Wiener Dog.” The castings of Gerwig, who will be playing the adult version of Dawn Weiner, and Delpy had been previously announced.

At the very least, this is intriguing casting. Gerwig is not everyone’s cup of cappuccino, but she was excellent in “Greenberg” and “Frances Ha,” both directed by boyfriend Noah Baumbach. And Delpy has a long track record of strong performances, with “Three Colors: White” and several films with Richard Linklater (especially the peerless “Before Sunrise” trilogy) standing out. Delpy has a world-weary quality – she’s French, after all -- that suggests that Solondz may be making a less absurdist and more realistic film: It’s tough to imagine her in the original. But who knows.

When we look back at “Top Gun,” we think of a few stirring flight sequences, ‘80s-style shoulder pads, a smarmy performance by Val Kilmer, and an inert romance with Kelly McGillis.

“Top Gun,” of course, made vastly more money than “Dollhouse” – about $357 million to roughly $5 million. Hollywood is so desperate for ideas these days that it’s inevitable a studio would try to tap into that “Top Gun” revenue stream. (Maybe there will be a new line of cool flight jackets and Maverick shades?) But given how differently American military power resonates around the world since the Iran and Afghan invasions, it’s hard to see how this one convincingly pulls off a flag-waving, rah-rah tone.

And will audiences get excited about a war between Tom Cruise and drones? Here’s what productions CEO David Ellison said of the film at a press conference:

"It is very much a world we live in today where it's drone technology, and fifth-generation fighters are really what the United States Navy is calling the last man-made fighter that we're actually going to produce, so it's really [about] exploring the 'end of an era' of dogfighting and fighter pilots and what that culture is today." Hmmn.

Is the “Dollhouse” sequel one a guaranteed hit? Probably not -- Heather Matarazzo, who played the sadsack seventh grader at the movie’s center, is not returning for this one. And this sequel will revolve, apparently, around a dog. But we still have high hopes. It’s a better idea than a new “Sex and the City” or “Weekend at Bernie’s” or “Dumb and Dumber” or those later “Rocky” or “Lethal Weapon” movies. Not to mention the hellish horror movies that will produce sequels until the end of time.

Solondz has been quiet lately – his last movie was “Dark Horse,” from 2011, a well-reviewed film that hardly set the world on fire. We’re eager to have him back.