"True Detective" recap: A shocking shooting, a horror ending, and "We get the world we deserve"

The story churns onward, ending on a cliffhanger out of nightmares 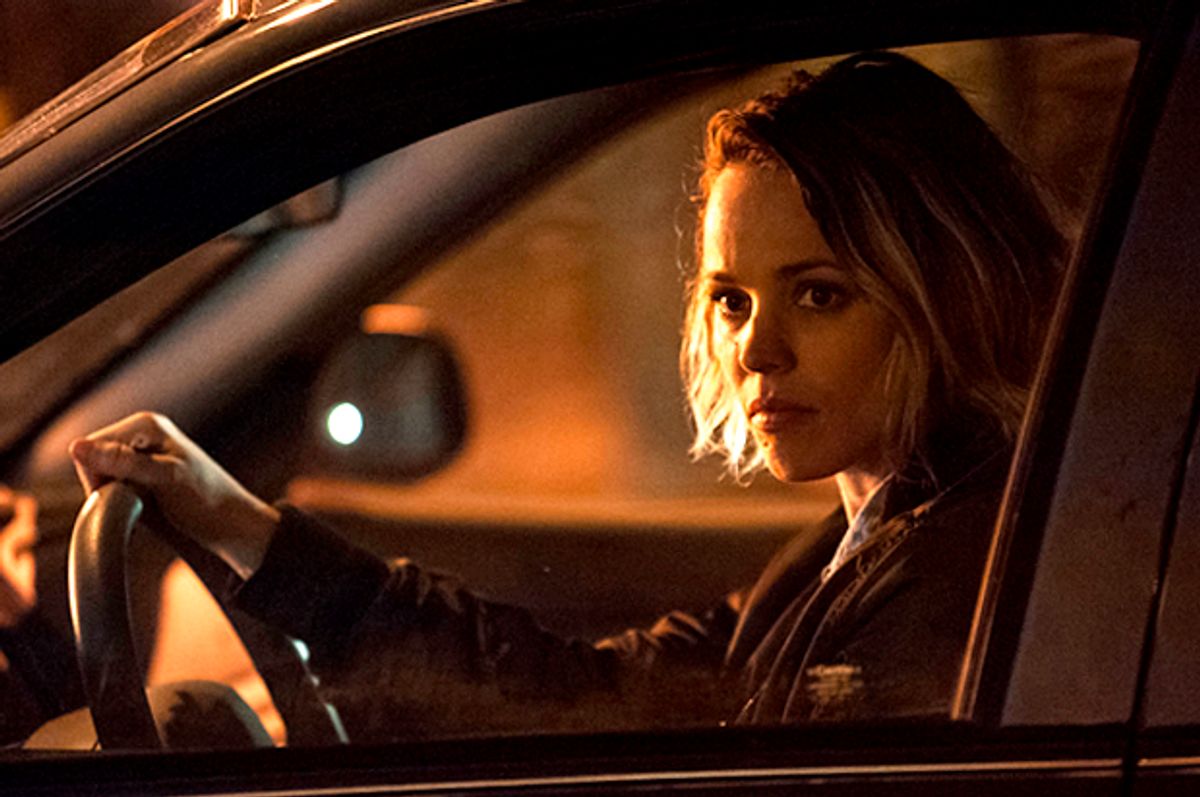 Well, that was an ending.

Whether or not you guessed or know what happens to Ray Velcoro (and I do know—hazards of the job), ending the second episode of the season by unloading buckshot into your show’s marquee star until he’s writhing on the floor is a bold move. Having the wielder of that shotgun be a tall, black-clad figure wearing a giant bird’s head made out of real feathers is the type of bizarre risk-taking that made “True Detective” season one so captivating. The shooter—the birdman?—is the stuff of nightmares, a killer motivated by obscure aims.

It’s fitting, as the story, right now, has obscure aims, too. I guess we’re here to solve the mystery of who killed Ben Casper—a strange man killed in a strange way—but as we’ve come to expect from “True Detective,” much of “Night Finds You” is about the struggles of the people investigating the case, even as the case becomes more and more immersive and complex. This is the episode that contains the tag line, after all, and what a tag line it is: “We get the world we deserve,” Ray says to Ani, observing not his own flaws, or hers, but the hypocrisies of the world at large, that would allow for a tax haven city full of polluting industry to exist at the margins of Hollywood.

Some of the best material in this episode are the dry and at times purely turn-taking conversations between Ani and Ray, who are now joined unwillingly at the hip to work a case that their respective departments don’t want to be solved. Kudos to Rachel McAdams, here, who as the e-cig sucking driver delivers just as much mystique as Colin Farrell did in the dive bar full of cigarette smoke. The conversations are not a match between equals, even as it brings out the better sides of Ray; she’s on some other level, forced to trade words with a man who has the temerity to proclaim that he “supports” feminism—when feminism, or something like it, is nothing short of life support for Ani.

The plot doesn’t quite match the thematics—when did Ani ever display an interest in knives? If she did, it was subtle enough that I didn’t see it, and though this show is a lot of things, it’s not typically subtle. And yet I liked it for what it said about this character. Ani is a woman deeply, painfully aware of how dangerous it is to be female in the world, and that knowledge has almost entirely shaped her. Something very bad happened to her on that commune—the signaling of the plot suggests sexual abuse—and she’s spent the rest of her life being a bulwark against that, for herself and others. She came to this story through a tale of a missing woman, and learning that Casper hires prostitutes regularly seems to galvanize her to more action. She keeps asking men in positions of power about the escorts—asking for the simplest acknowledgment of their existence—and is more often than not, rebuffed with irritation, as if she’s offending their refined sensibilities. In the evening, in her hotel room, she drinks something stiff and navigates to the escorts’ page, looking for … something. Maybe for her sister Athena. Maybe, also, for a glimpse of how so many men see women—for the ability to watch pornography without identifying with the woman who is objectified.

I think, too, that underneath her trauma, there is more than a little despair; she can see how fucked up the world is and can’t quite do anything about it except sharpen her own knives. Half the world can overpower her; a man would never stand for that, she says to Ray (which reveals her relationship with that ideal of masculinity that I discussed in my recap of episode one). But what if the man she’s planning to make bleed has a knife, just like her? What happens then? I think that’s the type of thing that keeps her awake at night, but it might also be a fear that looms so large, all she wants to do at this point is finally face it.

Because television and its fans love it when characters come together for love or sex, I have wondered if the demonstrably straight Ray and the demonstrably straight Ani are supposed to find their way to each other’s arms. Ray’s clearly impressed by her, which in some shows is enough to set the ball rolling. But honestly, I don’t see it (and anyone familiar with my stance on shipping will appreciate how that is a big deal for me). I can see the thematic resonance of Ray’s interest in the pretty, but scarred, barmaid. Some man hurt her, but she’s still willing to be vulnerable to Ray. It’s him, mostly, who can’t see his way toward letting someone trust him.

Speaking of the plot not entirely keeping up with the story— Ray was a complete disaster last week, and this week, he’s decidedly back on the wagon; sober enough to make a few clever jokes, conflicted enough to see the doublespeak of Vinci P.D., rueful enough to flirt with the barmaid with the scarred face. The only difference is that he beat the shit out of someone and has a real case to investigate, but I had trouble figuring out if that’s actually why he’s sobered up or if it’s some as-yet-unexplained plot expediency. Ray gets the worst news he’s ever gotten from his ex-wife at the local mall (I appreciated the glimpse of JCPenney in the background, as a nod to the ruthlessly unromantic cornerstones of suburban life), but he doesn’t go on the expected bender.

To be fair, that’s because he seriously considers killing himself. It’s not entirely surprising, coming from the character; it is dark, though, to depict a man who veers much closer to being a functioning human being when he’s determined to end his own life before much longer. (I understand that’s a thing that can happen to people, and I’m not even sure if there’s anything wrong with it. But it’s charged subject matter, one that comes close to glorifying the act.) What I did appreciate is that Ray predicts his own death before it comes to him, wearing the head of a black bird. I don’t know enough ornithology to confirm if that’s a raven’s head or a crow’s, but both are harbingers of death.

Paul, Taylor Kitsch’s character, is still hanging out on the margins, unsure why he’s in the story. But he is gay; at least, that’s what the camera’s not-so-subtle framework is indicating (he calls a man who hits on him a slur, in a way that is trying way too hard to be macho, and then stares longingly out the window at a male prostitute). Perhaps that much-hyped event in the desert has something to do with his repression, but either way, I’m just waiting for this tortured masculinity to get it over with, already.

Similarly less compelling this week is Frank, who continues to be played remarkably well by Vince Vaughn, but doesn’t quite prove his worth in this episode. I suspect Frank is already the champion of the show for some fans—he’s got that heady combination of swagger, empathy and murderousness—but I’m waiting for his character to crack open a little more. Right now, with his perfect marriage and his (crooked) hero’s journey, his papier-mâché monologues are a little too unconsidered, a little too on-the-nose.

The pieces of the story are still sliding into place. I enjoyed existing in the world of “True Detective” in “Night Finds You,” especially as some of the larger themes of the season are bubbling to the surface. The players of “True Detective” are caught in the tangle of different (and very Californian) attempts at progress—rapacious capitalism, clueless idealism, indulgent hedonism, and when necessary, a fervent embrace of ignorance. I’m waiting to see how it gels, but for now, I like what it’s stirring up.

Note: Last week I hypothesized that Ani Bezzerides is Italian, based on her last name (and showrunner Nic Pizzolatto’s heritage). Thanks to a reader to pointing out my error—she’s likely based on A.I. Bezzerides, a screenwriter who died in 2007 at the age of 98. The surname is Greek. Pizzolatto, meanwhile, has denied the connection.