Let's start arguing about the Emmys now: The critic's dream ballot that could come true

Here are the artists and shows that deserve to win, official nominations be damned 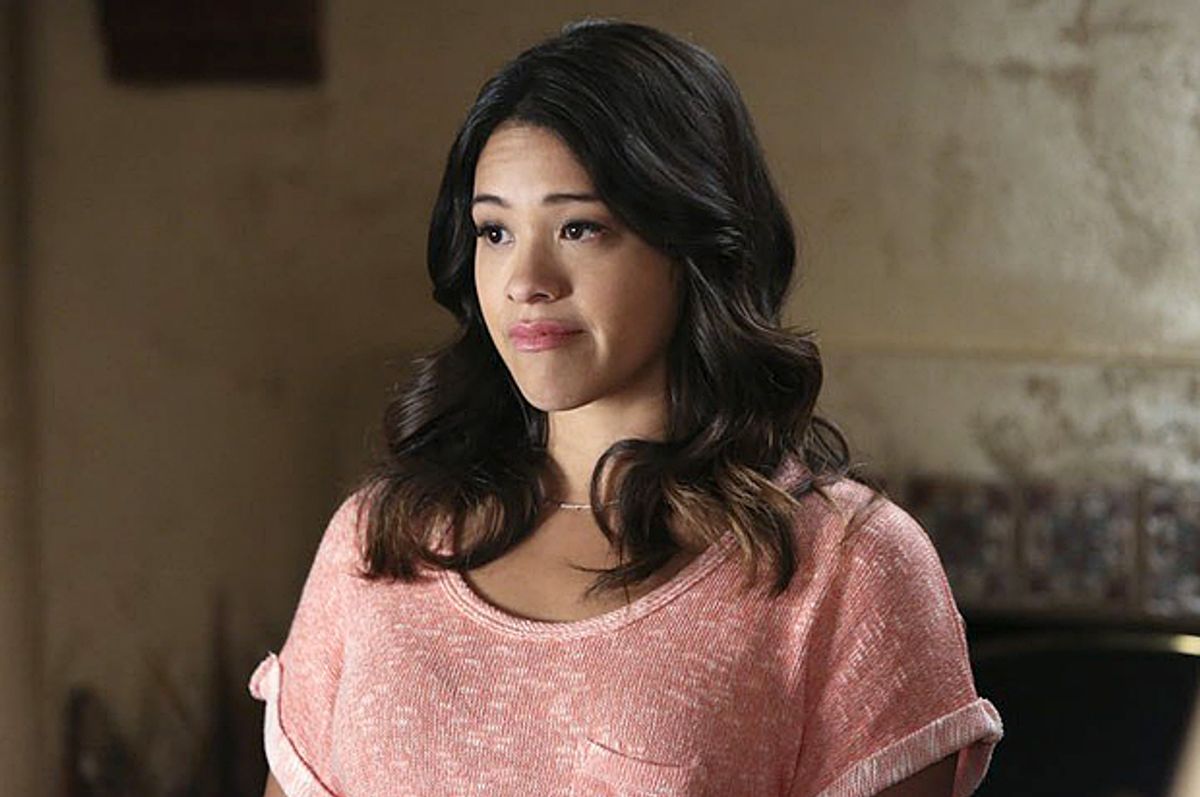 Gina Rodriguez in "Jane the Virgin" (The CW)
--

It’s that time of year, almost: On July 16, the Academy of Television Arts & Sciences will announce the nominees for the 67th annual Emmy awards, covering primetime television from June 1, 2014 to May 31, 2015. Because the Golden Globes also hand out awards for TV—for the calendar year—we seem to be stuck in a cycle of re-evaluating the state of television every six months or so. The upside to that is that there’s more TV than ever to keep track of; more worthy award-winners than ever before. Here’s what I would submit on my fantasy ballot, in a few select categories—including outstanding title design and best direction. This was a year where every comedy category was a Sophie’s choice while drama, occasionally, was hard to fill out with worthy contenders. But what is life without some arbitrary, awful decision-making?

You can see some of these picks—in a far more condensed version—in the July 3 issue of The Hollywood Reporter, along with critics Tim Goodman, Ellen Gray, Robert Bianco, Alan Sepinwall, and Matt Roush.

Best drama
“Penny Dreadful.” The big, obvious choice for this category is “Mad Men,” and in some ways, this is very much “Mad Men”’s year—the show just completed one of the most influential runs in television history. Another big contender for this prize is “Empire,” which broke every ratings rule in the book to become smash hit debut of the year. But as fond as I am of both shows, in my fantasy ballot, I’m looking to innovation, to the unexpected, to the surprising delight of a show unlike any other. “Penny Dreadful” is awesome in this way that is a little different from your Mad Mens and your The Americans; it’s both richly detailed and unafraid of cheap thrills, both subtle and over-the-top. I’m all about that gothic horror turned into glorious camp. Honorable mention: “Rectify.” The first season had a little more of that punch-in-the-gut feeling, but the second season is still magnificent.

Best comedy
“Jane The Virgin.” If drama was a hard choice, comedy this year is a gauntlet. Most of my favorite shows are in the comedic space, including moody “Looking,” satiric “Veep,” and the tragicomic family dramas “Togetherness” and “Transparent.” That’s in addition to more traditional sitcoms like “Fresh Off The Boat” and “black-ish,” and “Cristela” and “Brooklyn Nine-Nine” and “Louie” and “You’re The Worst” and… well, you seem my problem. But it’s hard to think of a show that accomplished more than the CW’s “Jane The Virgin,” a meta-telenovela with style, substance, and a fantastic cast.  Genre-defying story that never gets boring or stale; a fascinating and captivating ensemble; and ongoing commentary on telenovelas? I’ll take it.

Lead actor, drama
Jon Hamm, “Mad Men.” “Mad Men” as a whole is a masterpiece, yes. But it’s been too easy to overlook Hamm’s role in making that show what it is—especially in the at times uneven last season, where he was the fixed point around which the rest of the show turned. He’s never been honored before; let it be this year. He more than deserves it.

Lead actress, drama
Taraji P. Henson, “Empire.” “Empire” wouldn’t be “Empire” if Henson had not been cast—she’s alchemical in the role, the spark that sets the show on fire. Henson stole this smash hit from the first episode—and as ratings climbed higher and higher, it feels like she stole this TV season, too. It’s more than deserved. Do not mess with the Cookie Monster. (Even if you’re Gillian Anderson in “The Fall.”)

Lead actor, comedy.
Jeffrey Tambor, “Transparent.” Tambor’s really delivering a dramatic performance in this Amazon original, so it’s kind of unfair. But there’s no question here. “Transparent” is just so remarkable, that even in a stacked category, it’s impossible to overlook Tambor as Maura.

Lead actress, comedy
Constance Wu, “Fresh Off The Boat.” Eddie might be the narrator, but this show is about Wu’s Jessica Huang—a strong-willed woman from a different culture, dropped into suburban Florida, and proceeding to kick ass and take names without missing a beat. No discovery seems as crucial to me this year as discovering Wu’s incredible comedic talent—her ability to deliver both humor and heart in every episode.

Supporting actor, drama
Tobias Menzies, “Outlander.” I am skipping a lot of worthies here, I know. But in a show with a lot of ups and downs, but Menzies is consistently creepy and brilliant—with a horrifying presence as Black Jack Randall that turns into something warm and romantic as Frank Randall.

Supporting actress, drama
Carrie Coon, “The Leftovers.” I hated this show—but Carrie Coon made me like it. She’s phenomenal.

Supporting actor, comedy
Dermot Mulroney, “Shameless.” For some reason, this a really difficult category for me—I adored both Andre Braugher in “Brooklyn Nine-Nine” and Mel Rodriguez in “Last Man On Earth.” But look, Dermot Mulroney is fantastic in this season of “Shameless,” as the near-collapse ex-junkie Sean. He’s had a run of memorable guest-stints on a few other comedies—“Enlightened” and “New Girl”—but I liked him the most in “Shameless,” which gave him a lot of dramatic opportunities.

Supporting actress, comedy
Melanie Lynskey, “Togetherness”. What a joy watching this oft-typecast actress fully inhabit her role. Charter schools aren’t the idealistic solution for education that her character Michelle makes them out to be, but coming out of her mouth, the argument—like the character—takes on simple and beautiful power.

Best limited series
“Wolf Hall.” Nothing can top the books, but it the performances are so amazing that this BBC Two/Masterpiece Theatre production was a separate and wonderful joy in itself.

Outstanding variety, sketch
“Inside Amy Schumer.” Controversies and competitors be damned—Schumer’s skill has dominated the conversation around comedy, both offering up deconstructions of male-centric humor and provoking discussion around what’s appropriate in the performative world of stand-up. Fascinating, provocative, and hilarious overall, yes.  But “12 Angry Men Inside Amy Schumer” alone would be enough to make her show legend.

Ouststanding variety, talk
“The Larry Wilmore Show.” Because a show that will throw a tea bag at Cory Booker is award-worthy in my book.

Outstanding documentary or nonfiction series
“The Jinx: The Life And Deaths Of Robert Durst.” There’s no other nonfiction special that has made me feel so purely thrilled than “The Jinx”—truly, a tour de force in the genre of documentary.

Best directing, drama
Jared Harris, for “Time & Life,” “Mad Men.” It’s hard to overlook successes like “Game Of Thrones”’ “Hardhome,” featuring a long battle on the ice, or “The Knick”’s pilot, “Method And Madness,” directed by Steven Soderbergh. I even wavered towards giving the award to “Penny Dreadful”’s “Séance,” which last summer sold me on that show’s imminent genius. But let’s go with an old standby who proved it still had plenty of tricks up its sleeve. “Time & Life” showed us the dissolution of Sterling Cooper & Partners. It was an episode that begged to be examined frame-by-frame, and rewarded the viewer richly for doing so.

Best directing, miniseries/movie
Hugo Blick, The Honorable Woman. This Sundance miniseries written and directed by Hugo Blick was on my shortlist for best miniseries of the year, at least in part because Maggie Gyllenhaal is so captivating as protagonist Nessa Stein. But what really stuck with me about the series, months later, was its gorgeous visual quality—perhaps encapsulated best in the shot of a queen chess piece falling gracefully down a chair and ending right-side-up, as if nothing had happened to disturb it.

Best directing, comedy
John Riggi, for “Valerie Is Brought To Her Knees,” “The Comeback.”  There were a lot of worthy episodes that made it to my short list—including “You’re The Worst”’s “What Normal People Do,” “Veep”’s “Testimony,” and “The Last Man On Earth”’s pilot, “Alive In Tuscon.” But I kept coming back to “The Comeback,” with an episode that shook me to the core last fall. The cinematic narration of Valerie’s humiliation and objectification is made uncomfortably plain without much intervention at all on the part of the script; it’s a disturbing masterpiece, and just 22 minutes long.

Best writing, drama
Amy Lippman, “Fight,” “Masters Of Sex.” There are some other highlights, of course: “The Americans”’ “Do Mail Robots Dream Of Electric Sheep?” is a close contender, and so is “The Fall”’s second-season finale, “What Is In Me Dark lllumine”—both feature conversations between a murderer and a civilian, played out over many minutes of waiting. But my investment, as always, is with the romance. “Fight” remains the pinnacle of “Masters Of Sex”’s achievements—a complicated tango of intimacy and confrontation, played out in a hotel room while a boxing match drones on in the background.

Best writing, comedy
Charlie Day, Glenn Howerton, and Rob McElhenny, “Charlie Work,” “It’s Always Sunny In Philadelphia.” Here it is, ladies and gentlemen—the single hardest category for me this year. I ended up with a nine-way tie for a while, with the pilots for “Jane The Virgin,” “Unbreakable Kimmy Schmidt,” and “You’re The Worst” on the shortlist, as well as “Broad City”’s “Knockoffs” and Louie’s “Bobby’s House,” which are interestingly both about pegging. I will go instead with an episode of a seasoned show that I just happened to like a lot, and I’m doing that while overlooking a hilarious bottle episode from another show that I just like a lot (sorry, “Archer”). “It’s Always Sunny In Philadelphia” isn’t always on everyone’s radar, but it is consistently fantastic. “Charlie Work” is an experiment in continuous storytelling, and it’s phenomenal; a piece of comedy that has the intricacy of a heist film, except only one person present knows it’s a heist.

Best writing, miniseries/movie
Hilary Mantel and Peter Straughan, “Wolf Hall.” It’s hard to go up against a novelist that has won the Man Booker Prize—twice—for the books “Wolf Hall” is based on.

Best animated program
“Over The Garden Wall.” This is a category that is always stacked with my favorites—“Archer,” “Bob’s Burgers,” newcomer “Bojack Horseman,” and longtime classics like “The Simpsons.” But “Over The Garden Wall” is something else—a musical animated miniseries with a sinister underbelly. There has not been anything else like it before; we can only hope we’ll see something like it in the future.

Best short-form animated program
“Steven Universe.” I don’t want to go too into the weeds of the Emmy’s technical awards, but I’d be remiss if I didn’t shout-out the incredible work “Steven Universe” has been doing with the format that “Adventure Time” has made into high-art. Both shows are incredible—but I’m a sucker for a newcomer.

Outstanding main title design
“Unbreakable Kimmy Schmidt.” Yes, yes, I know what you’re thinking. Title design? Seriously? But if I’m going to watch the opening credits to something a dozen or more times, let it be good, please. I almost gave this to “Outlander”’s beautiful title sequence, with music from Bear McCreary, but ultimately, I had to go with the infectious, YouTube-style “Unbreakable Kimmy Schmidt” opening, which is now already in your head, because that’s how catchy it is.