GOP's Obamacare nuclear option: Will they nix the filibuster to obliterate the law?

The court challenges are over. Will they play legislative hardball if they unify control of the government? 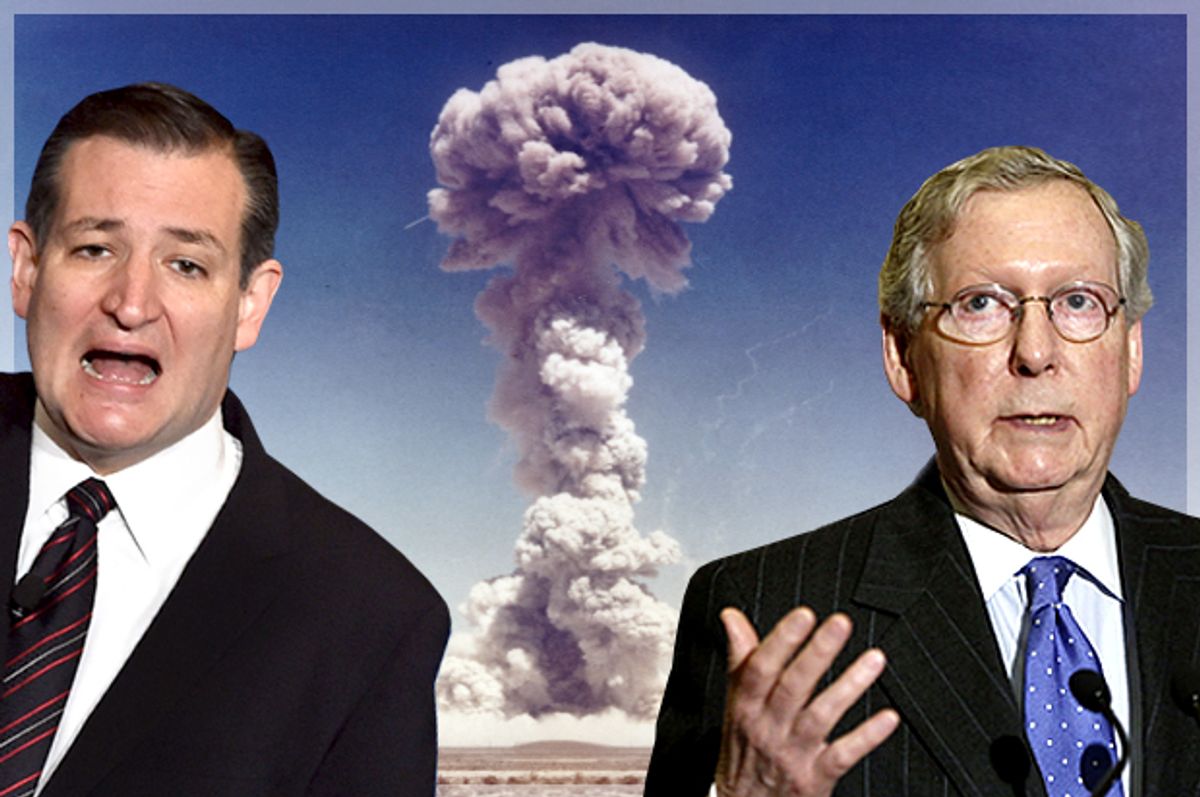 Now that a certain court case about whether four not perfectly clear words in the Affordable Care Act invalidate the statute has been laughed out of the Supreme Court, the theater for future Obamacare-killings returns to the legislature.

Senate Republicans are considering an experiment this Congress to see how much of a full repeal package they can move through the chamber under the simple-majority rules of reconciliation. If any bill made it out of that arduous process, it would get vetoed by the current president. But at least Republican leaders could know how much they'd be able to chew off in 2017 under potentially unified Republican control of government.

But say reconciliation, with all of its rules about what types of legislating can and can't be done, proves to be too much of a hassle. It's too hard to twist repeal into a net deficit-reducer, and the Senate parliamentarian's being a pain in the ass, not allowing Republican leaders to remove all the terrible, job-killing, Europeanizing regulations that have no budgetary impact. Imagine if Republicans came into power in 2017 with control of both chambers of Congress and the White House, and then turned to their base and said, "Sorry, we can't repeal Obamacare after all, because some nitpicky Senate procedural rules are getting in the way." How do you think that might play on talk radio? How might that play at CPAC? Would the Senate Conservatives Fund, Heritage Action and the Club for Growth just nod empathetically and say, "that's a bummer, but we understand and won't attack you"?

Ha! Every Republican would get primaried and lose. When you hear conservative entertainment personalities like Sarah Palin or Mark Levin or whoever blab on about how they may form a third, real conservative party if Republican congressional leaders don't start showing backbone, it's usually always bluster. But maybe they would actually do it for an election or two if Senate Republicans hid behind the filibuster and left Obamacare intact.

So then the question becomes: Would you support using the "nuclear option" to kill the filibuster in order to move an Obamacare repeal to the president's desk?

We raised this possibility last week, and it's beginning to filter into candidate interviews. It sounds like Jeb Bush, for example, is finally learning how to contend in a Republican presidential primary. When pressed about nuking the filibuster in an interview with Hugh Hewitt last Friday, Bush said that he "would certainly consider" it if the right elements of a replacement plan were in place. Scott Walker had an even more definitive answer for Hewitt:

This isn't that difficult of a question for presidential candidates. As Hewitt acknowledges in the formulation of the question -- "will you urge your Republican colleagues ..." -- invoking the nuclear option to finish off the filibuster is not up to the president. It's up to the Senate majority leader and the members of his conference. If I were president, would I shift all the pressure to Mitch McConnell? Yes. Absolutely.

And this would be a difficult decision for Mitch McConnell and his conference -- but not for the commonly discussed reason. The reason no majority has blown up the legislative filibuster in this age of gridlock isn't entirely about protecting minority party rights, since Senate control switches back and forth all the time. It's also about protecting the majority from having to enact its own ideological goals and deal with the results.

Imagine if the GOP eliminates the filibuster to repeal Obamacare. That already presents a problem that Jeb Bush touched on: They're going to have to follow through with some sort of replacement plan to mitigate the blowback from those who will have lost their insurance. The hot mess that was their attempt to unify behind a post-King v. Burwell replacement plan went nowhere, and perhaps fortunately for them, they don't need to worry about that now. But that flurry of brainstorming-gone-nowhere was just a continuation of their five-year inability to rally behind a "conservative alternative" to Obamacare.

What else would there be pressure for the GOP to do? Voucherize, privatize, and/or cut Social Security and Medicare, for starters. These are the sort of things they'll acquiesce to in non-binding budget regulations, to show conservative movementarians their "values" or whatever, but dear God: Senate leaders don't really want to go through with it! They don't want to cut, along party lines, the two most popular government programs of the last century.

Eliminating the legislative filibuster would pressure majorities into acting on all their years of built-up bluster, which is one of the reasons why eliminating the legislative filibuster would be a good thing for our politics even if it might make for some short-term suckiness. It would put majorities on the spot and show what they are and aren't really willing to do. It would have a clarifying effect and might allow our politics to advance from election to election, instead of debating the same old crap every two years forever, to no end.

If Mitch McConnell and colleagues found themselves under pressure from the Republican base to nuke the legislative filibuster but opted not to, it wouldn't just be because they're worried about preserving their rights when they're inevitably back in the minority. It would also be about protecting themselves while they're in the majority.