"Steve Jobs," portrait of the artist as tech guru: What we lose when we worship at the altar of commerce

When we abandon the arts, this is what's left 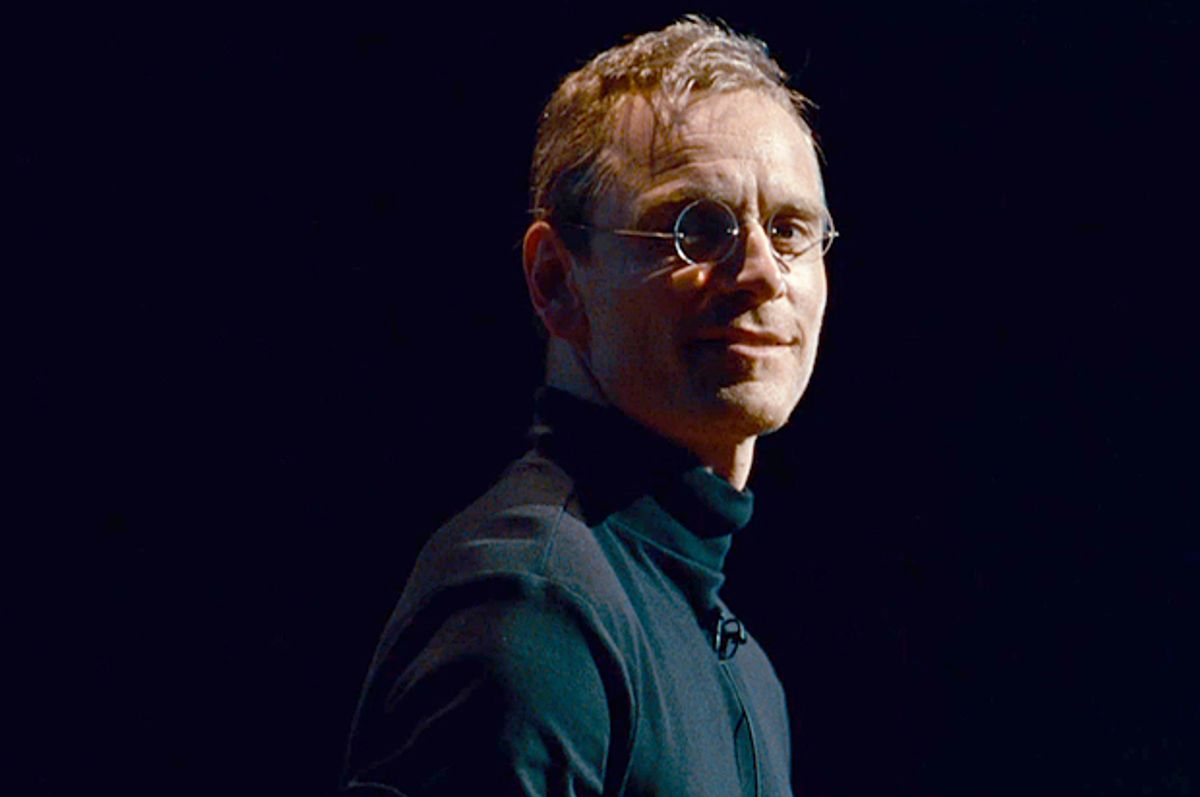 The trailer for the new Steve Jobs biopic has just been released, and it looks like the movie could be formidable, maybe one of the films of the year. Despite changes in cast and director, the matching of director Danny Boyle with actor Michael Fassbender (along with screenwriter Aaron Sorkin) could summon serious dramatic firepower.

The movie seems to make explicit something that’s been swirling for a while now: That engineers, software jockeys, and product designers are the capital-A Artists of our age. They are what painters and sculptors were to the Renaissance, what composers and poets were to the 19th century, what novelists and, later, auteur film directors, were to the 20th.

The likening of tech savants to artists goes back at least as far as Richard Florida’s books about the creative class, but it picked up energy with the 2011 death of Jobs, who was hailed as a job creator by Republican politicians and mystic genius by many others. You see this same impulse in the opening of Jonah Lehrer’s now-discredited book “Imagine,” which compared the inventor of the Swiffer (which "continues to dominate the post-mop market") with William James and Bob Dylan.

The metaphor becomes quite clear in “Steve Jobs,” which is based on Walter Isaacson’s bestselling biography. In the trailer, Fassbender’s Jobs announces that he is not a musician – he is the conductor. “Musicians play their instruments,” he says. “I play the orchestra.” Stirring orchestral music – with stabbing violins – plays through the trailer. "Artists lead,” the Jobs character rants to a meeting at a particularly fraught time, and "hacks ask for a show of hands."

But how many Americans – including those who can tell you the difference between every generation of iPhone – can name a single living conductor? What about a real visual artist? (That is, someone besides Lady Gaga.) As a recent CNN article asks, what about a famous living poet? (“No, not Maya Angelou. She died last year.”)

So how did we get here, where technology designers claiming the mantle of the Artist have replaced – in both the media and in the public’s esteem -- the actual working, living, breathing artist?

The reason is not just the weird technological fetishism that has gripped American culture since the ‘80s. It also comes from how we as a society have spent our resources, and it goes way back.

While Americans, on the whole, didn’t worship culture with the same dedication as Europeans, the whole West saw the arts as something central, even a replacement for religion: After Nietzsche told us God was dead, theaters and concerts halls that looked like churches sprouted up not just in Britain and the continent, but in the wealthier and more settled cities in the States as well. Conductors like Toscanini became cultural heroes. Nations and plutocrats alike spent money to spread the gospel.

Cold War funding supported culture even more directly – Eisenhower sent Louis Armstrong overseas – and television stations and magazines considered the dissemination of the arts part of what they did. Maria Callas, Thelonious Monk, and Leonard Bernstein showed up not just in small-circulation specialty publications but on the cover of Time magazine.

For all the difference between their politics, generations, and backgrounds, the president who followed Eisenhower did not abandon the religion of culture: Kennedy had Robert Frost read at his inauguration. JFK spoke often, publicly and privately, about the importance of culture, writing that “There is a connection, hard to explain logically but easy to feel, between achievement in public life and progress in the arts.” Lyndon Johnson followed him by founding the National Endowment for the Arts. Nixon made war on a lot of the previous administration’s achievements, but not this.

Even more important, public schools offered music and arts education that gave at least some students a sense that this stuff mattered and was a basic part of being an educated, informed citizen.

How did all of this edifice collapse, so that music, poetry, theater, painting and everything else would be just another part of mix of commerce and “content”? That’s hard to make sense of, but let’s just say that the culture wars of the Bush I years, the demonization of artists and other subversives as a “cultural elite,” and the attacks on the canon by the academic left didn’t help. Nor did the conquest of neoliberalism, waged by Reagan and Thatcher and their respective brain trusts, which told us that markets are supreme and more important than musty old ideas like society or culture. And the globalization that came after gave narrow-minded utilitarians reason to slice and dice arts education. It’s still happening.

In the simplest sense: When you use state funding to help develop computer technology and what would become the Internet, and cut support for arts and culture, what do you think is gonna happen?

So what’s wrong with making Steve Jobs and others who came up with cool gadgets and efficient apps for getting pizza to people in San Francisco into the artists of our age? Doesn’t culture change over the decades and centuries?

Well, sort of, but here’s the key difference. The whole idea of poetry or a symphony or a novel is to get past daily life. It’s not just about cool or efficiency or even entertainment but an aspect of – to mangle the title of Geoff Dyer’s excellent essay collection – what was previously known as the human condition. We used to see culture as something that could be deeper than a really fast computer or a cordless mouse.

The literary essayist Richard Rodriguez has said that we live in “the age of the engineer.” If so, something really has died inside us. The Jobs movie looks great, but if this guys is our John Lennon or Nina Simone or Bernstein or Beethoven, we really are cooked.