"You are not welcome here": At concerts and music festivals, fans with disabilities are too often shut out, endangered and ignored 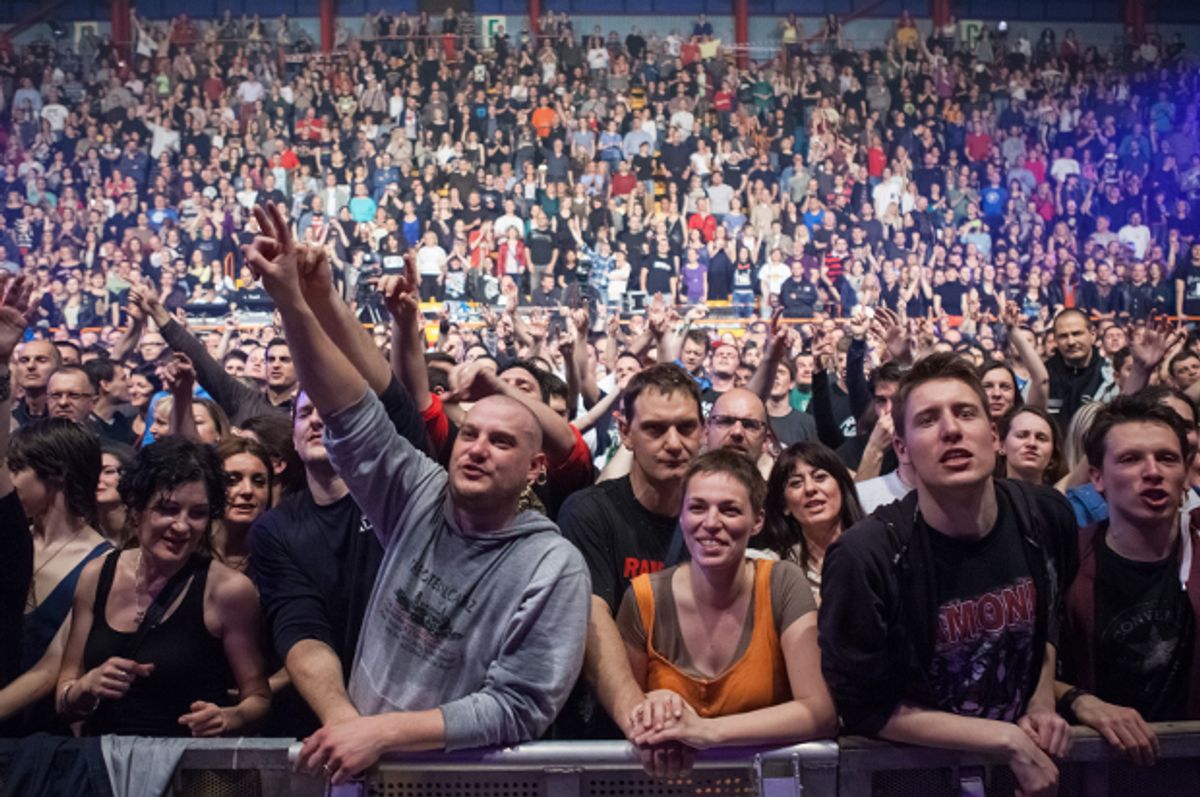 Several years ago, I attended an outdoor music festival with a friend. I have a physical disability, cerebral palsy, that makes it difficult for me to walk long distances, and so we pulled up near the entrance to ask a parking attendant where the handicapped parking was located. Nowhere, we were told: There were no spots. Seeing as we were stopped near several rows of vehicles, we asked if we could just park there, as it was close to the front gate. That wasn't an option, either: We could, but we ran the risk of being towed--and considering the festival was in an out-of-the-way location, in a state in which neither of us lived, that didn't seem like a good option either. Luckily, because I'm a journalist, I had a contact at the festival that I could call. This person proceeded to find us, chew out the parking attendant for not allocating spots for handicapped parking--which was illegal, he was reminded--and led us to an area that was safe and close enough for me to get in and out with no problems.

While this was an extreme case of discrimination, it wasn't the only time my disability unexpectedly became an issue when I was going to see live music. There was the parking lot attendant at another venue who asked me and my husband, "Do you need to use the spot?" when we asked about parking in the handicapped space we knew was near a door. (Um, why else would we be asking to park there?) Another time at an old theater, an employee looked skeptically at me when I asked to use an elevator to get up to the top level where my seats were, as if I didn't necessarily need to. (Again, why else would I be asking?) And while attending SXSW some years ago, I had a bar actually tell my group we had to vacate the table and chairs at which we were sitting, as they had to be removed for the late-night shows that were scheduled to begin--which would've been fine had there been other chairs in the venue, but there weren't. (Needless to say, we left and went elsewhere.) And these are just a few of the things I've experienced, as someone who's been an avid concert-goer for nearly two decades.

Twenty-five years after the passage of the Americans With Disabilities Act, public places,  buildings and streets are arguably far more accessible now than they used to be. In addition, these laws have given people with disabilities legal ammunition to use when they encounter discriminatory practices and regulations, or inaccessible spaces. But although the ADA requires facilities to make structural modifications to ensure all patrons have equal access to goods and services--a process known as "readily achievable barrier removal"--in practice, what constitutes reasonable accommodations varies wildly from place to place. The ADA itself admits this in its compliance materials: "Regulations do not define exactly how much effort and expense are required for a facility to meet its obligation. This judgment must be made on a case-by-case basis, taking into consideration such factors as the size, type, and overall financial resources of the facility, and the nature and cost of the access improvements needed."

And so when it comes to concert venues or festival spaces--many of which are located in older buildings or take place on land that's not typically used for music, respectively--it's always a question as to what kind of challenges might be lurking. But too often, it's also unclear what sorts of necessary accommodations might have been implemented. And I'm not just talking about obvious things, such as a ramp leading into a venue, or a working elevator, or festival grounds that are flat enough to traverse. It's also important to think about having an accessible bathroom that's large enough to accommodate a wheelchair, or a bathroom that's not down (or up) a flight of stairs; it's having the option to request a sign language interpreter; it's having an unobstructed view of the stage that won't be blocked if people stand up in front of you; or it's having a chair available away from jostling crowds. It's even having a well-lit pathway to and from the parking lots, or (in the winter) salted sidewalks and snow cleared off from close drop-off points. These things aren't necessarily top-of-mind when most people plan to enjoy live music, but for many people with disabilities, they're crucial elements to having a safe, enjoyable experience.

But perhaps more important, accessibility at a concert venue or festival starts even before attendees reach the entrance. And this is where the discrimination often isn't blatant: When a music festival doesn't have information about disability access (or at least contact info where someone can inquire about accommodations) or ticketing sites don't have the option to purchase accessible tickets online, it sends a subtly non-inclusive message: You are not welcome here. I've encountered both of these things, and it's a deflating but anger-inducing experience, one that makes me feel excluded from something that brings me great joy, personally and professionally.

What's perhaps more frustrating to me is that the U.S. severely lags behind other places in terms of working to combat this inequality. The 15-year-old charity Attitude Is Everything is dedicated to helping increase U.K. music fans' access to live music, and has partnered with major venues, organizations and bands--including the Cure, Franz Ferdinand and Alt-J--under the slogan "Live music is for everyone." The BBC has also helped the cause by reporting stories such as "Disability access: How user-friendly are UK's music venues?" which investigates and discusses issues of inclusion at music venues, using real-world examples and voices. These examples of awareness-building acknowledge and reinforce that accessibility is something of which all music fans can and should be aware; it's not just an issue reserved for the disabled community, but one that affects the entire concert-going community.

And that's an important point: Seeing live music is something that's supposed to be unifying, a chance to experience the heart-swelling transcendence of a favorite band (or discover the greatness of a new act) with other people. Although of course there's plenty of obnoxious behavior to be found at shows, that's hopefully just a minor irritant; after all, there's no replacement for the unparalleled rush of emotional energy that comes from seeing an amazing concert. This enjoyment shouldn't be something limited to those who can stay on their feet for hours on end. After all, there's no one correct way to enjoy a concert--and there are myriad reasons why many people find standing for long periods (or even a short amount of time) quite difficult.

Thankfully, there are signs here in the U.S. that the discussion about venue accessibility is finally starting to percolate into the mainstream. Activist/label owner Sean Gray started a website called Is This Venue Accessible to collect and report information about music spaces in the Baltimore/Washington, D.C., area and beyond. Essays have been published by writers such as James Cassar, who has cerebral palsy and frequently writes about his experiences with the underground punk scene; in fact, Cassar recently had a discussion with Vans Warped Tour founder Kevin Lyman about what the latter has done to ensure the traveling festival is welcoming to all. A cursory glance at festival websites for Coachella, Pitchfork, Austin City Limits and Bonnaroo reveals instructions for patrons with disabilities, ranging from basic guidelines to in-depth accommodations.

On a personal level, I've been to plenty of places that have happily and immediately helped me when I've asked for a bit of assistance--whether it's finding me a bar stool or a chair, or pointing me toward a raised platform. Despite the many spaces that are ignorant of regulations or unwilling to make necessary modifications, there are many venues and venue employees doing things right, and ensuring that all music lovers have an equal shot at enjoying the show. There's certainly still more that can be done -- and, really, fighting for accessibility remains a never-ending thing -- but the more that people bring these issues into the spotlight, stress their importance and don't back down in the face of obstacles, the better off we'll all be.