GOP austerity is a disaster of Greek proportions: Sam Brownback, Bobby Jindal & the economic scam of the century

America isn't Greece, but we can see in Kansas and Louisiana the disastrous consequences of Greek-style austerity 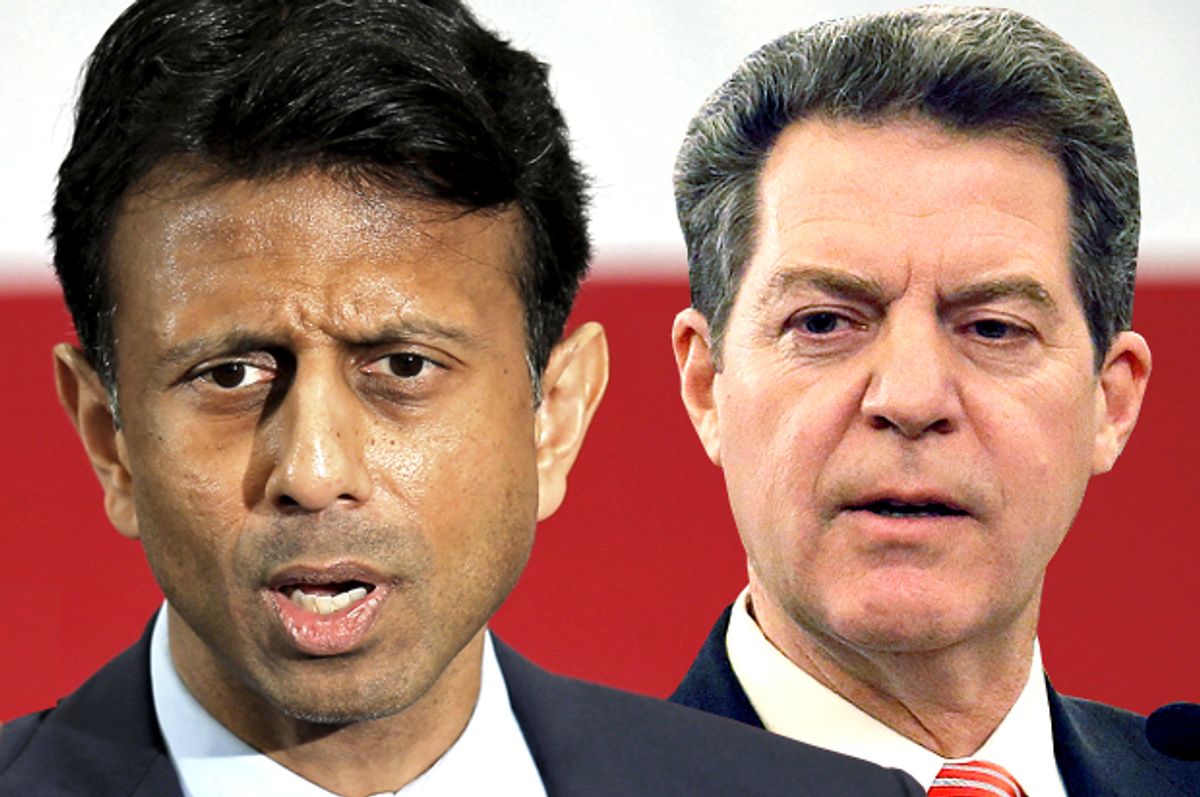 The nation of Greece may be the cradle of democracy but these days it's getting a harsh lesson in its limitations. Right now, streets are filled with protesters but there are no lines at ATMs because the banks are all closed. Everyone is waiting to see what's going to happen when the people vote this week-end on a referendum that will decide, essentially, if the country is going to remain in the Euro and accept the ongoing edicts of "the troika" or if it's going to "Grexit.

9≥ " (The troika is the European Commission, the European Central Bank, and the International Monetary Fund which has been lending the the country money for the past five years on the condition that it engage in the metaphorical human sacrifice of its citizens.)

As you undoubtedly know by now, aside from being chosen to suffer for the sins of all the high flyers who caused the financial crisis, the Greeks also had the temerity to elect a leftist government with the express purpose of ending the austerity plan that has ruined their economy and thrown them into even deeper debt than they were in before. That, as Poppy Bush used to say, will not stand. Nobody puts Troika in the corner. The Greeks must pay and pay, not only for their economic folly but also for thinking they could get out of their proper punishment through democratic politics. Sure, those elections are nice and all but lets not forget who's really in charge.

Paul Krugman's column on Monday explained that all the hand-wringing over Greece's "irresponsibility" is balderdash:

[Y]ou need to realize that most — not all, but most — of what you’ve heard about Greek profligacy and irresponsibility is false. Yes, the Greek government was spending beyond its means in the late 2000s. But since then it has repeatedly slashed spending and raised taxes. Government employment has fallen more than 25 percent, and pensions (which were indeed much too generous) have been cut sharply. If you add up all the austerity measures, they have been more than enough to eliminate the original deficit and turn it into a large surplus.

So why didn’t this happen? Because the Greek economy collapsed, largely as a result of those very austerity measures, dragging revenues down with it.

As Krugman has also been observing ever since the financial crisis hit, austerity for these people isn't really about finance at all. It's about morality, specifically the alleged "moral hazard" involved in allowing average people to "get away with" running up debt it cannot pay back. Interestingly, this moral hazard never applies to the wealthy businessmen who often make bets that don't pay off. Bankruptcy, fresh starts, debt forgiveness are things best reserved for people who know how to use them. For the average Joe, the advice of Herbert Hoover's Secretary of the Treasury, Andrew Mellon,  still applies:

"Liquidate labor, liquidate stocks, liquidate farmers, liquidate real estate... it will purge the rottenness out of the system. High costs of living and high living will come down. People will work harder, live a more moral life. Values will be adjusted, and enterprising people will pick up from less competent people."

Austerity is about teaching people a bracing lesson in responsibility. Or, as Chris Hayes archly put it:

And as Dave Johnson pointed out in this piece at Campaign for America's Future, the Greek crisis is right out of the book "Confessions of an Economic Hitman":

We are an elite group of men and women who utilize international financial organizations to foment conditions that make other nations subservient to the corporatocracy running our biggest corporations, our government, and our banks. Like our counterparts in the Mafia, EHMs provide favors. These take the form of loans to develop infrastructure – electric generating plants, highways, ports, airports, or industrial parks.

… Despite the fact that the money is returned almost immediately to corporations that are members of the corporatocracy (the creditor), the recipient country is required to pay it all back, principal plus interest. If an EHM is completely successful, the loans are so large that the debtor is forced to default on its payments after a few years. When this happens, then like the Mafia we demand our pound of flesh.

Johnson also reminds us that these debts have been called "strategic deficits." (This piece by Greg Anrig explains the provenance of the term.) And austerity is, at it's core, a very public punishment meant to serve as an object lesson to anyone who thinks this might not be the way it has to go.

And yes, economies do survive it one way or another unless a war or revolution comes along to interrupt the suffering. The first half of the bloody 20th century is full of illustrations of how that happens. But John Maynard Keynes' most famous statement gets directly to the reason why imposed austerity is actually a deeply immoral act. He acknowledged that economies would eventually right themselves in the long run and then he said:

But this long run is a misleading guide to current affairs. In the long run we are all dead. Economists set themselves too easy, too useless a task, if in tempestuous seasons they can only tell us, that when the storm is long past, the ocean is flat again.

In other words, the fact that things will someday be better isn't of much use to people whose lives are destroyed and whose futures are ruined. Keynes believed, and it has been proven over and over again that he was right, that stimulus can turn things around more quickly -- and austerity makes things worse. After all the horrifying consequences of austerity policies in the last century, it's mind-boggling that the lesson has been discarded.

Luckily for the U.S., after the financial crisis, the new president was able to pass some stimulus legislation early on and the austerity policies produced by political shenanigans in later years only succeeded in slowing the recovery, rather than killing it. In any case, America isn't Greece. (And no, it never will be.)

But that doesn't mean we have escaped a homegrown version of austerity in the laboratories of democracy where hard core conservatives have been happy to play with people's lives for many of the same reasons the troika is playing with the lives of Greeks and Spaniards. Governors Sam Brownback and Bobby Jindal for instance, are teaching the good people of Kansas and Louisiana all about suffering. They are driven by an ideological commitment to cutting taxes for corporations and wealthy individuals, raising taxes on working people and cutting government services for everyone else. They too comfort their constituents with the bromide that in the long run everything will work out. And in the long run their constituents will also be dead.

All the GOP presidential candidates are running on some version of the austerity platform even as they promise tax cuts for rich and a growing economy that will result in everyone who votes Republican becoming millionaires. They will expect sacrifice, of course. That goes without saying. We have all these "strategic deficits" that will have to be taken care of first. But just as soon as we cut all that fat everything's going to be just great.

We'll find out this week-end if the Greek people will decide to absorb more pain in the hopes that the troika will finally be appeased or if they are finally done being Europe's chosen sin-eaters.  Unfortunately, no matter what happens Greece is unlikely to be the last victim of austerity. Stay tuned for the next major debt crisis unfolding much closer to home: Puerto Rico, where the people in the crosshairs are our fellow American citizens.

UPDATE: On July 2, in a rare display of rationality,  the IMF decided to admit publicly that austerity doesn't work. This is getting very interesting:

The International Monetary Fund has electrified the referendum debate in Greece after it conceded that the crisis-ridden country needs up to €60bn (£42bn) of extra funds over the next three years and large-scale debt relief to create “a breathing space” and stabilise the economy.

With days to go before Sunday’s knife-edge referendum that the country’s creditors have cast as a vote on whether it wants to keep the euro, the IMF revealed a deep split with Europe as it warned that Greece’s debts were “unsustainable”.

Fund officials said they would not be prepared to put a proposal for a third Greek bailout to the Washington-based organisation’s board unless it included both a commitment to economic reform and debt relief.