As Fox News mourns, the rest of us have an Independence Day to celebrate

Marriage equality arrives! The Confederate flag (almost) departs! Toast with some #oreillytears, and enjoy the 4th 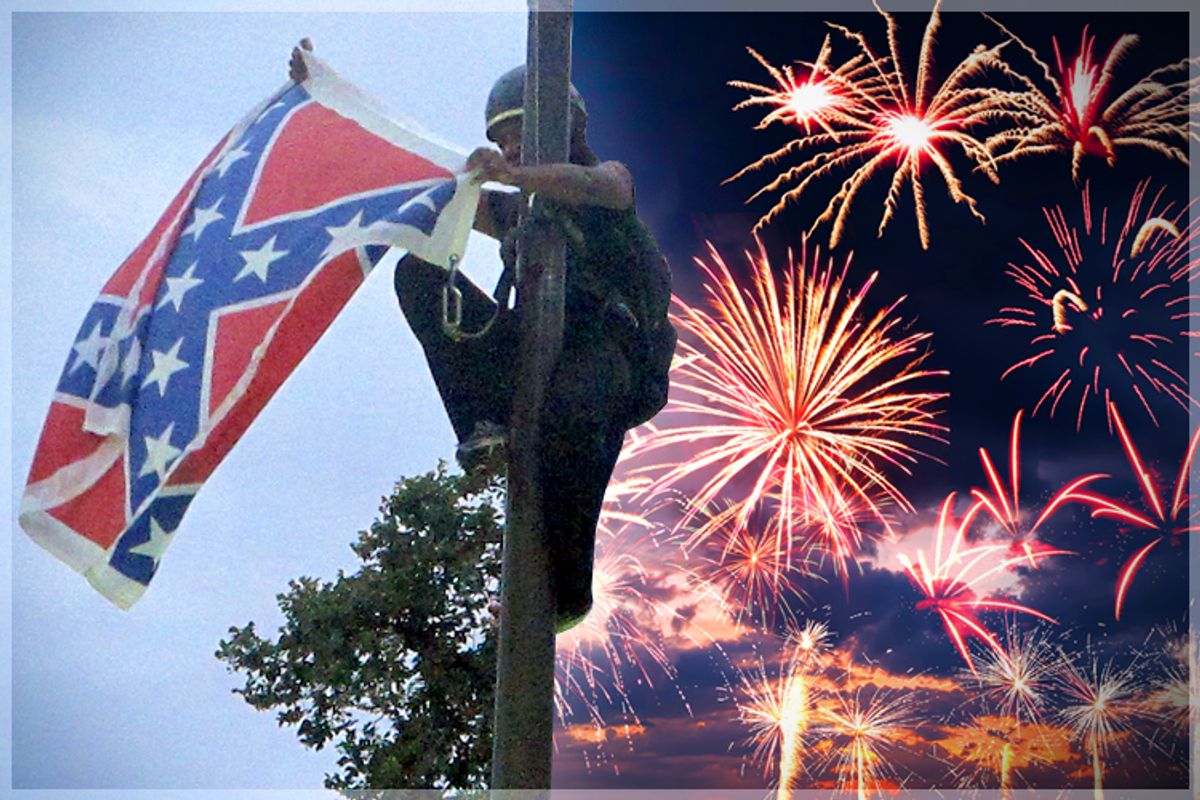 Bree Newsome removes the Confederate flag at a Confederate monument at the Statehouse in Columbia, S.C., June, 27, 2015. (AP/Bruce Smith/photowings via Shutterstock/Photo montage by Salon)
--

July 4 has always been a time for aggrieved progressives to remind the world that most Americans weren’t liberated on that first Independence Day. Enslaved Africans; dispossessed native Indians; women of every race; white men without property; LGBT Americans; the rights claimed in the stirring Declaration of Independence didn’t fully belong to most of us for many years.

That’s still a real, historic truth. But maybe, at least this year, we can celebrate the genuinely liberating, animating ideals of a country that came close to living up to them in a dizzying 24 hours last week.

In just one day, the country we are, the country we’ve been trying so long to become, emerged in indelible, unforgettable images. A few will always stay with me: Our first African-American president, standing before purple-robed ministers, singing the first notes of “Amazing Grace” with sorrow and defiance at a funeral for yet another black martyr. Two beaming elderly white gentlemen, Jack Evans and George Harris, becoming the first men to marry in Dallas, Texas, after the Supreme Court ruled for marriage equality.

As the sun set Friday night, the White House glowed in rainbow colors. In the dawn’s early light the next day, a black woman scrambled up a flagpole, as if to freedom, and snatched down the Confederate flag. For a day, anything seemed possible. Which reminded us that it is. We celebrated a genuine Independence Day in that 24 hours, so let’s pause to take it in on this July 4 holiday.

I’m a staunch believer in the need for people to experience success, in social movements, and that to make it clear what’s possible, you have to make it visible. That’s why San Francisco Mayor Gavin Newsom will go down in history as an LGBT hero, because by temporarily legalizing marriage equality in San Francisco in 2004, he let American see exactly whose freedom they were crushing with their fear, “piety” or indifference. When Bree Newsome climbed that pole and took down the Confederate flag, however briefly, she reminded us that direct action makes visible the liberating power of all of us. (Only in writing this paragraph did I notice the similarity of their names; I didn't link them for any corny reason like that, but make of it what you will.)

Even South Carolina GOP Gov. Nikki Haley opened new political horizons that hadn’t seemed possible just days before. I didn’t give Haley enough credit last week for her turnaround on the Confederate flag. I may not like the fact that it took political courage to reverse herself and rebuke the leaders – which included some Democrats, to be honest – who protected that symbol of hate for too long.

But it did take courage, and it shouldn’t have been lost on me that a young Indian-American woman who grew up Sikh in South Carolina, caught in the bitter chasm between black and white, found the grace and bravery to do what many white men of both parties could not. She changed our notion of what was possible, too.

And how can I forget one of the biggest victories for human decency over the last week: NBC and Macy's finally parted ways with Donald Trump after the erstwhile presidential candidate derided Mexicans as criminals and rapists. Again, it shouldn’t have taken so long for the braying bully to get such a rebuke; the media tolerated his birtherism for far too long. But the arc of the moral universe is long, and finally it’s bending away from Donald Trump. Hallelujah.

I don’t want to get too saccharine here. It’s still devastating that it took the massacre of nine African-Americans to get movement on the Confederate flag. It’s still a little discomfiting that our first black president could only express profound identification with African-Americans, with the blessing of white America, in a black church in the wake of that act of cruelty and terrorism against the Emanuel Nine.

I’m also forced to acknowledge: When the mainstream media hails President Obama’s fantastic week, it includes his vanquishing progressive Democrats to grease the skids for his not terribly progressive trade deal, whose goal is to make the world safe for multinational corporate investment. Even Supreme Court Chief Justice John Roberts’ crucial decision on the Affordable Care Act represented a victory for the free market more than for the right of human beings to affordable health care. "Congress passed the Affordable Care Act to improve health insurance markets, not to destroy them," Roberts wrote in his opinion’s most stirring language.

Next term the Supreme Court will take up affirmative action and public worker union rights, and its decisions are likely to delight the right-wingers appalled by this term’s landmarks. Though the left has won most of the culture wars that began in the 1970s (although women’s rights remain under siege), it has not reversed the economic backlash that began eroding workers’ rights at around the same time.

Still, if you have any doubts about the magnitude of what happened last week, spend some time catching up on Fox News, because over there, they get it. On Fox, Trump is a martyr to political correctness, and Bill O’Reilly says the rainbow-illuminated White House represented “an in your face to traditional America” from our tyrannical president. Whenever I get a little down, wondering if the causes I care about are making progress in the world, I take a restorative bath in #oreillytears. You should try it.