Soso and Chang, prison bunkmates by default: Why won't "Orange Is the New Black" expand its Asian cast?

The show depicts an equal number of white, black and Latina characters—and still only these two Asian women 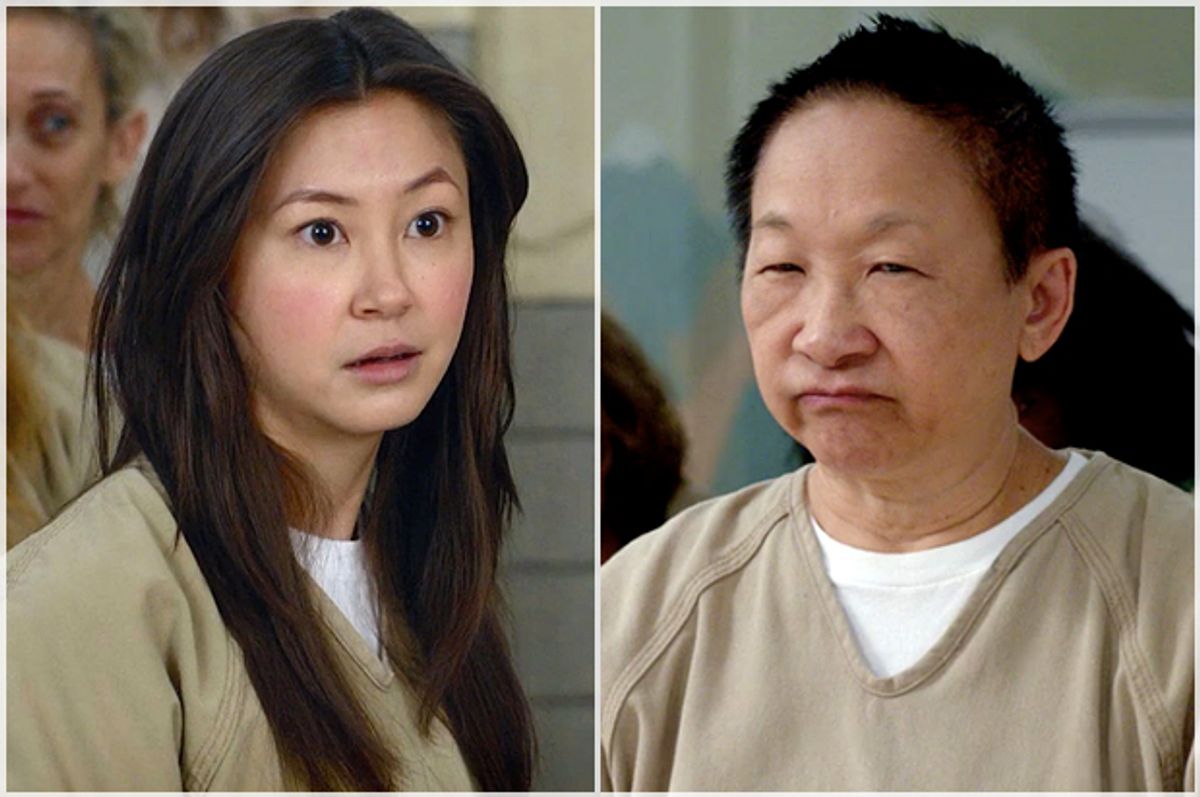 I never thought I'd say this, but we need to see more Asian women in prison.

Of course, I don't mean actual incarcerated women—I mean characters in "Orange Is the New Black." Over the Netflix hit series' three seasons, we've seen women of all shapes, sizes and ages thrive and languish both before and after they're locked up. But at least one demographic has been noticeably underrepresented in the show: Asian women.

The show first tuned my eyes and ears to this deficiency in the first season when, in the episode "WAC Pack," the inmates split into four groups—whites, blacks, Hispanics, and the others, which consisted mostly of "The Golden Girls" or the prison's older inmates—with each electing one person to represent them on the resurrected Women's Advisory Council. The racial divide here is part of the punchline, but it's also a perfect example of the show's knack for stripping away political correctness to more honestly depict complex social and power structures. Imagine my confusion, then, when Asians, who constitute roughly 13 percent of the population of New York City, are given no chance to represent themselves. Instead, the show's sole named Asian character, Chang (her first name is Mei, though surely no one knows that), is elected to represent "the others."

The continued absence of Asian characters in "Orange Is the New Black"—two years later, the show has added only one more Asian character, Brook Soso, who is given just slightly more airtime than Chang—is, in some ways, a manifestation of the Model Minority Myth that has plagued Asian Americans for over half a century now. The truth in this stereotype is that Asians do have a lower arrest and incarceration rate than all other racial groups (though at least one study has found that the conviction rate for Asians is higher than for other groups). But the show has already distanced itself from prison demographic statistics in making the white, black and Hispanic inmate populations roughly equal in numbers. Upgrading the Asian presence to one whole cafeteria table—or two or three—wouldn't require any further suspension of disbelief.

Instead, the writers of "Orange Is the New Black" give us Chang and Soso, who would be fine rounding out a subgroup of Asian characters, but do an inadequate job of representing Asian Americans on their own. Chang, played by the hilarious Lori Tan Chinn (whose picture, when you search her on Google, is for some reason a shot of Kevin Spacey), is a Litchfield veteran who has a handful of one-liners in earlier episodes as the inmate who runs the commissary. In season 3, we finally see her backstory: Young Mei was set up by a matchmaker to be married off to an older man for money until he saw her and deemed her too ugly to marry. Later, after she saves the life of her brother's friend, a gang member, she exacts her revenge on her former fiancé by ordering the gang to find the man and cut out his gallbladder.

The story is supposed to be empowering, I think, and in some ways, it is: We see Chang in a moment of victory, brought on solely by her own intellect and cunning and not by any of her seedy male peers. At the same time, it's an act of vindication and insecurity, which conveys weakness and powerlessness. This tug-of-war between the inmates' earnest and evil sides is present throughout almost every character's backstory (the inclination toward some sort of wrongdoing is necessary to make a case for why they were imprisoned). But most characters are given the chance to redeem themselves throughout the series. In almost every case, characters who have their backstories shown are given more prominence, perhaps a subplot here or there. Meanwhile, Chang only recedes from the limelight. Chang's story also suffers because it doesn't fit into any of the season's overarching narratives. Season 3 of "Orange Is the New Black" is noticeably without a Vee-like villain, but it does espouse broader themes, like motherhood and faith, which are the explicit subjects of the premiere and finale of the season, respectively. Chang's is the only flashback of the season that does not contribute to either narrative, and subsequently, the episode and the character are isolated from the rest of the show.

It is perhaps ironic, then, that Soso is the one who feels isolated from the rest of her prison; at the very least, her storyline fits into the season fairly well. In fact, her season-long search for faith and a higher power basically precipitated the finale, which turned out to be one of the show's best and most heartwarming episodes. And there are many more good things to say about the character, played brilliantly by Kimiko Glenn: her honest dismissal of Meadow, her brave and recurring confrontations with Leanne, her willingness to seek help for mental illness, even after Healey expresses his disapproval. Despite her depression and eventual suicide attempt—a storyline that I applaud the show's writers for taking on for its relevance to both prison inmates and Asian-American women—Soso transforms in season 3 from nagging and superfluous to empowered.

Still, three seasons in, this isn't enough. I'll repeat: Soso is the only complex Asian character in the series, and she's only just getting there. Remember, she hasn't even been given a full flashback episode yet. Chang's schtick is basically that she's invisible, and what we have seen of Soso's mother (Did they intentionally make her racially ambiguous as well?) indicates that she raised Soso under a strict regimen that had room for rigorous piano lessons but not for God. In other words, she's a stereotypical Asian mother: a "Tiger Mom."

Stereotypes are okay to use—in fact, shows like "Orange Is the New Black" thrive on them. But television series and other popular media platforms have the unique ability and opportunity to humanize these stereotypes through the diverse stories that they tell. Yes, Aleida did end up having (too) many children, but she also places a high value on motherhood. Yes, Gloria is superstitious, but only after her friend and mother-figure seemed to successfully "change" the sex of one of her babies while it was still in the womb. Yes, Taystee may have grown up participating in a drug ring, but she's also passionate about literature and learning. And yet, humanization takes time, which, in TV-land, comes in the forms of screen-time or screen-presence. At the moment, the Asians of Litchfield have neither.

It's undeniable that "Orange Is the New Black" marks a huge step forward for women and people of color in the television industry, and I have been and will continue to be a devoted fan of the show. But if the show is going to tackle race, there are many ways to make headway in discussing the Asian-American experience in United States prisons. I'd love to see the show delve into Soso's upbringing and education, as I wonder if she's struggled with mental illness in the past. I'd love to see Chang contribute more to Litchfield life, or to see what might have transpired between the gruesome gallbladder excision and now.

If "Every sentence is a story"—a claim displayed proudly on the posters for "Orange Is the New Black"—then the show's writers currently seem to be implying that Asian-American stories either don't exist or don't matter.