What a crazy election it's been already: The most memorable (and goofiest) questions of the cycle, so far

Just a few months in, the GOP field has already been tripped up pretty easy. And yes, it's been fun 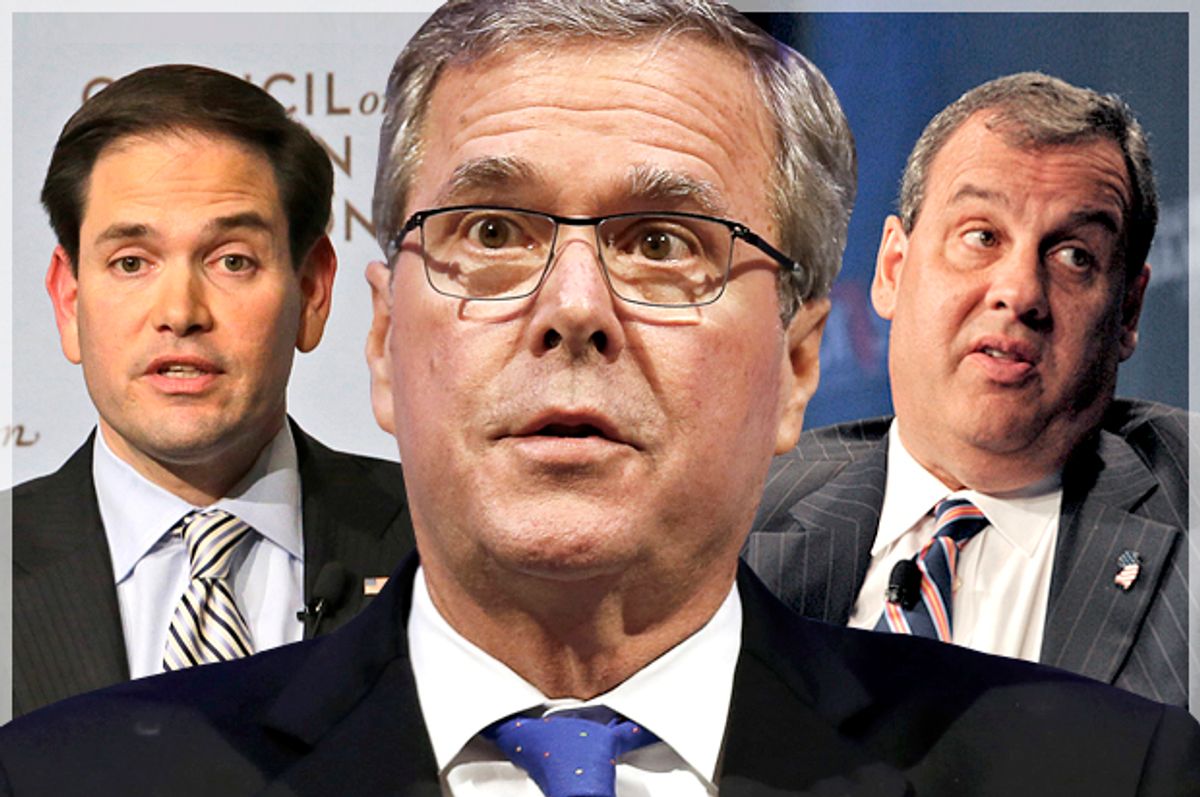 The 2016 presidential race is the best one ever. Who's having fun? This guy is. And I'll tell you why: because of all the Republican candidates, duh. And specifically the way in which any question posed to one candidate worms its way through the entire field, which appears to be rounding out to a cool 16.

I mean it is just July here, people. And already we've had so many entertaining week-long spells of the entire field trying to grapple with questions that pose modest difficulty. This isn't just the media being annoying, although that's always a component. One question that trips up several candidates in the field is a blessing for several others in this early stage of sorting. Let's run through several of the dumbest/best episodes of the year thus far.

Should vaccinations be mandatory?

New Jersey Gov. Chris Christie was doing the standard "Go to Europe for a couple of days and pretend that this gives you foreign policy expertise" thing in early February. He visited Britain and went to a soccer game, toured the Globe Theatre, chit-chatted with Dave Cameron, et cetera, whatever. His trip coincided with a brief measles outbreak in the U.S., traced to Disneyland, that got everyone all freaked out. During a visit to a biologics facility in the United Kingdom, a reporter asked Christie about the measles cases and the need for vaccinations against such diseases.

“Mary Pat and I have had our children vaccinated and we think that it’s an important part of being sure we protect their health and the public health,” Christie told reporters here Monday. But the likely Republican presidential candidate added: “I also understand that parents need to have some measure of choice in things as well, so that’s the balance that the government has to decide.”

And so began the process of asking GOP candidates whether it should be mandatory for parents to get their children immunized with MMR and other common vaccinations. Some conservatives cried foul about the liberal media's agenda to portray the Republican party as crazy conspiracists. But plenty of potential Republican candidates (no one had declared at this point) were all too pleased to differentiate themselves from Christie. Dr. Ben Carson, for example, saw this as an excellent opportunity to show that he's not a nut on everything. "Certain communicable diseases have been largely eradicated by immunization policies in this country," he said in a statement, "and we should not allow those diseases to return by foregoing safe immunization programs, for philosophical, religious or other reasons when we have the means to eradicate them." Marco Rubio said that all children should "absolutely" be vaccinated. Even nutty old Bobby Jindal "said he would not send his children to a school that did not require vaccination and condemned anti-vaccination 'fear-mongering.'"

It was Rand Paul, alas, who simply could not turn down this golden opportunity to jet off on a dorm-room libertarian tangent.

Republican Sen. Rand Paul is standing by his statement that most vaccinations should be "voluntary," telling CNBC that a parent's choice not to vaccinate a child is "an issue of freedom."

In an interview with the network Monday, Paul said that vaccines are "a good thing" but that parents "should have some input" into whether or not their children must get them.

And he gave credence to the idea -- disputed by the majority of the scientific community -- that vaccination can lead to mental disabilities.

"I have heard of many tragic cases of walking, talking normal children who wound up with profound mental disorders after vaccines," he said.

This was deeply irresponsible talk and, when called out as such, Paul compounded the error by shushing a female reporter who dared interrupt his philosophizing.

Rand Paul felt that he was treated unfairly :(

This was the best. I mean, it's such a dumb question. You just say "yes" or "sure" or whatever and then move on with your day, la-dee-da. And yet so many candidates struggled to answer it.

The initiator of this discussion was "America's Mayor," Rudy Giuliani, who is not a nice man. And no wonder, because he doesn't feel loved. "I do not believe, and I know this is a horrible thing to say, but I do not believe that the president loves America," Giuliani said in February. "He doesn’t love you. And he doesn’t love me. He wasn’t brought up the way you were brought up and I was brought up through love of this country.”

This was a very weird thing to say -- why won't you love me, mistew pwesident! -- and maybe it's not fair that presidential candidates should be compelled to respond to the pitbull sputterings of a C-list party goon. But again... it's not a hard question. What say ye, candidates?

Bobby Jindal: "The gist of what Mayor Giuliani said — that the president has shown himself to be completely unable to speak the truth about the nature of the threats from these ISIS terrorists — is true. If you are looking for someone to condemn the mayor, look elsewhere."

Scott Walker: "You should ask the president what he thinks about America. I’ve never asked him so I don’t know.”

Ted Cruz's press secretary: "You can say that we declined to comment."

Others, like Lindsey Graham, said that they didn't know -- "I am not Dr. Phil" -- but this isn't really a valuable discussion anyway, so stop talking about it.

Marco Rubio had the perfect, simple answer. (This is becoming a trend, by the way: Marco Rubio doesn't gaffe all that easily, which is why he's in good shape.) "I’ll suffice it to say," Rubio said, "that I believe the President loves America. I think his ideas are bad."

Would you attend a gay wedding?

What were we saying about how Marco Rubio doesn't gaffe? We're not sure this one counted as a "gaffe" so much as an interesting response that led to other interesting responses. Fusion host Jorge Ramos asked Rubio if, despite his opposition to same-sex marriage, he would attend the same-sex wedding of a close friend or loved one. He said that he would, because a party's a party (paraphrase).

“If there’s somebody that I love that’s in my life, I don’t necessarily have to agree with their decisions or the decisions they’ve made to continue to love them and participate in important events,” he told Ramos.

The senator said he would not hurt that person simply because he disagrees with what they have decided to do.

“Ultimately, if someone that you care for and is part of your family has decided to move in one direction or another or feels that way because of who they love, you respect that because you love them,” he said.

This was either a reasonable, humane response or the most cynical thing: a "kindler, gentler bigotry," as Salon's Joan Walsh put it.

Radio host Hugh Hewitt ran with the question and began asking all of his candidate-guests for their responses.

Ted Cruz dodged. "I haven’t faced that circumstance," he told Hewitt. "I have not had a loved one go to a -- have a gay wedding." He is, however, a fan of soliciting large donations from wealthy gay Republicans.

Rick Santorum said he would not attend a gay wedding -- the ideologically consistent albeit straight-up cold answer. "I just felt like as a person of my faith that would be something that would be a violation of my faith," he said. "I would love them and support them, but I would not participate in that ceremony." As many people responded afterwards: don't worry, Rick, you're in no position to receive an invitation to a same-sex wedding anytime soon.

Rick Perry, surely the life of any wedding reception, said that he "probably" would, because what the hell?

(The absolute best contribution to this saga was from National Review's Maggie Gallagher, the former president of the National Organization for Marriage, a group that has now objectively failed at its central purpose of stopping same-sex marriage. Gallagher drafted a hilarious letter for how she would turn down a very hypothetical gay wedding invitation. A short excerpt: "'Porneia' is a word in the Bible that has been much mistranslated. But I think it means a sexual relationship that cannot by its nature become a marriage. That’s why Christ said that marriage is forever, unless it is porneia." This is the thing that she was going to write to her hypothetical gay friend.)

Knowing what we know now, would you have authorized the invasion of Iraq?

A.k.a. "the Jebbening." I'm not sure that a lot of candidates, except for perhaps Rand Paul, were all that interested in denouncing the Iraq war as a mistake founded on faulty intelligence. But the opportunity to pounce on Jeb Bush was too irresistible. It took the establishment frontrunner four days, and four different answers, before he finally came around to saying: knowing what we know now, I would not have authorized the invasion.

To paraphrase Ted Cruz, these were some of the darkest four days of the early 2016 election cycle. For Jeb Bush! It was great for everyone else. Just about every other candidate ended up admitting that the Iraq war was, in retrospect, a mistake -- not quite as good as them all admitting that even knowing what we "knew" then, it still would have been a stupid idea, but certainly a fine start.

Should South Carolina fly the Confederate flag on state grounds?

The tragic shooting in a historic African-American church in Charleston, South Carolina, gave way to one of the quadrennial questions candidates face during presidential primaries: Should South Carolina fly the Confederate flag on its state capitol grounds, as it is required to under state law?

The tragedy at first didn't seem to change many GOP minds. We got the usual diversions about how the flag is a symbol of ancestral heritage and not racism. This was going to play out as it's always played out: with nothing changing.

Scott Walker said that he was always against the Confederate flag, even when he was dodging direct questions about his view of the flag before Nikki Haley made it safe.

I know it sounds like I'm making fun the GOP here. That's because I am. But hasn't this process been good for the party? Conservatives like to complain about how the media is out to destroy them -- you know that wily media, always asking people simple questions that they can answer any way they'd like! -- but look at the results of these news cycles. The GOP has found itself supporting mandatory vaccinations; saying that they dislike President Obama's policies but don't question his patriotism; that sure, they might as well go to a gay wedding if invited; that the Iraq war, in retrospect, was a mistake; and that the Confederate flag shouldn't be displayed on government property. These may not be the most vital questions, but at least the party is learning how to put them to rest and move on, rather than getting wholly sucked into the GOP presidential primary insanity vortex on even the most trivial of issues.